Pennsylvania is the Worst

Hey friends! I last updated just shy of hitting the halfway point of the Appalachian Trail in Harper’s Ferry, West Virginia. Since then, I’ve knocked out four more states (West Virginia, Maryland, Pennsylvania, and New Jersey), and I’m a day or two away from completing New York as well. For a while felt amazing and unstoppable. 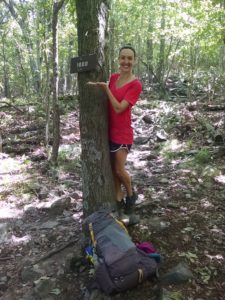 However, the AT is not all joy and highs. There are physical and mental lows, too, and I have a confession to make. I skipped about 70 miles of trail in Pennsylvania. There, I said it.
Let me explain. It all started when I lost my phone. It must have fallen out of my pack one day as I was swinging it back on after a break. That evening, I wasn’t able to find it. I was distraught at losing photos, notes, and worst of all, email addresses of trail angels who had been kind to us and to whom I wanted to send thank-you notes after finishing. 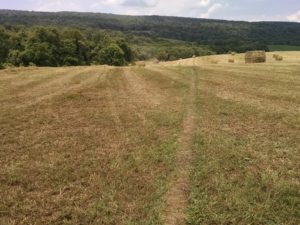 It started all flat and beautiful…

My depression was compounded by Pennsylvania itself. The southern half of the state was lovely – gently rolling, thickly wooded hills, smooth paths, frequent walks through state parks with concessions or right in front of delis, miles and miles of flat and gorgeous farmland – but as one hikes north, the trail turns evil. Supposedly, this part of the mid-Atlantic marks the Southern edge of the ice sheets thousands of years ago, so as the glaciers expanded and then retreated, they tore up the earth and bedrock, leaving it churned and rough. The other explanation we’ve heard is that trail elves come out at night and flip all the rocks pointy-side up, and then file them sharper. Both stories seem correct. 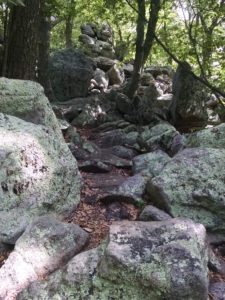 Imagine walking across an expanse of rocks ranging in size from baseball up to basketball up to standard couch cushion up to standard couch. Now imagine that instead of being rounded and smooth, these rocks and boulders are all pointy and uneven, and some are wobbly, and some have rattlesnakes on top, and your ankles are tired from the previous 5 miles of this, and there literally isn’t an end in sight. Imagine you hit a flat spot of blessedly smooth and soft dirt, but within 8 or 9 steps, you’re in another rock field. It is 90+ degrees, 150% humidity, and even the “reliable” water sources have run completely dry. This is northern Pennsylvania, and it goes on like this for 120 miles. 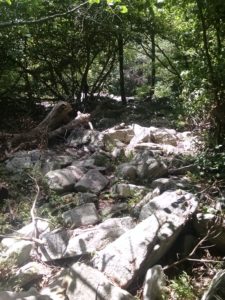 And so after a mental and physical low brought on my losing my phone and attempting to hike through these minefields, I called my dad and asked him to pick me up and bring me home, just for a few days so I could sort out a new phone and new shoes. He agreed to come in the morning and so I was guaranteed at least a short relief. 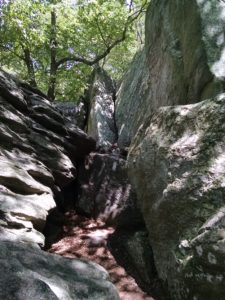 Dad called back on Alice’s phone not long after. He had received a call from my phone from someone who had found it, charged it, and looked through my contacts to find “Dad”. This kind soul was also a thru-hiker- in fact, someone we had hiked with for a few days and knew fairly well. He knew someone driving up our way who could deliver it in the morning. Hallelujah and thank heavens for kind people and good karma. I no longer needed to leave the trail… but for my sanity and my soles I wanted to. 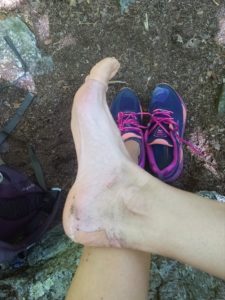 My poor feet are slowly recovering in my new trail runners.

And so I found myself back in Morristown for a few days of R&R and new trail runners (Brooks Cascadias if you were wondering). Home was comfortable, and smelled good, and including cold beer and hot meals and clean sheets. 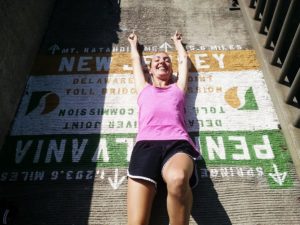 I picked the trail back up at the Pennsylvania/New Jersey border at the Delaware Water Gap and it felt great to be back with refreshed feet. Those 70 miles are still on my mind, though. I’ll summit Mt. Katahdin in Maine in September and for all intents and purposes, my thru-hike will be over. But rest assured, in October I’ll be taking a long weekend in Pennsylvania. We have unfinished business. The heat will have let up and hopefully the water will be running, but the rocks will still be there, as sharp and treacherous as ever. But I know I’ll conquer them, too.

Don’t forget to follow along on Insta @nicholeyoung1 for the next 700+ miles of adventure!

Hello, I'm Nichole, AT class of 2016! I walked from Georgia to Maine (4/25-9/22) to test my limits and strength, to be a badass, and to show myself that if I can do this, I can do absolutely anything... and also raised $2,500 for clean water in the process. Summer of 2017 will find me backpacking the Mini Triple Crown: Long Trail, Colorado Trail, and John Muir Trail. I'm currently living in northern NJ with my incredibly supportive and non-hiking husband, working multiple jobs to fund my mountain addiction, and working on my new website, do-anything.com. You can also see what I'm up to on Instagram, @nicholeyoung1.