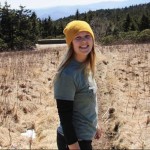 Shaffer and the trail

In 1948 Earl Shaffer put on a backpack. He laced up his boots and started walking step-by-step out of Mount Oglethorpe in Georgia. According to the Chicago Tribune, when a passer-by asked where he was headed, Shaffer replied simply. He was walking to Maine.

Shaffer was the first thru hiker to walk the entire distance of the Appalachian Trail. He finished the hike in 124 days by walking an average of 16.5 miles per day. He used his poncho as shelter.

After a hurricane decimated most of New England’s portion of the trail in 1938 and World War II cut into availability of volunteers and resources to keep the trail maintained, Shaffer had to rely on his own navigational skills to walk his chosen northbound route.

Shaffer wrote religiously in his trail diary, which is available for viewing online, and wrote a book about his hiking experience after his second attempt at the trail. This time, he walked southbound from Maine to Georgia and finished in 173 days. According to the New York Times, Shaffer was perturbed by the increasing difficulties of the trail and preferred fewer mountain ridges. Poetry compliments Shaffer’s succinct entries.

“When the billowy clouds are as gleaming as snow
In a sky of cerulean blue
Streaming by in a pattern of effortless flow
Constantly and refreshingly new
Go ye out to the mountains, far far from a town
Stretch yourself on the clean forest floor
Gaze aloft through the canopy, ceasing to frown
And remember your troubles no more.”

On page 23 of his trail diary, Shaffer mentions walking into Hot Springs, North Carolina, at around 5 p.m. He stopped to shave before walking farther along the trail across the French Broad River and into town. He bought groceries for $3.00 and noted that the store was out of color film. That night, he made camp on the trail. He would move on to hike to a hot spring and spend the night with the watchman at Camp Creek Bald Tower.

Pipsissewa, Trillium and the Trail

In 2000, or some year near that time, I laced up my hiking boots. My Grandpa Jack, cousin Natalie and I started walking to somewhere I can’t quite remember now. Natalie and I wore princess dresses and held onto walking sticks.

When Shaffer finished his hike in 1948, my Grandpa Jack heard about it 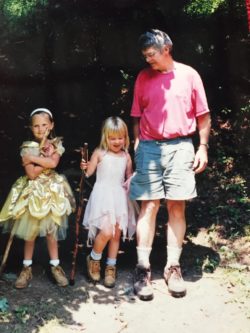 Me, my cousin Natalie Fitzgerald and our Grandpa Jack on the trail.

through his hometown paper in Rome, Georgia. He decided then that he would one day do what Shaffer was doing.

In 1990, My Grandpa Jack and Grandma Maxine started their hike at Springer. They hiked a ways before running into trouble when my Grandma Maxine broke her elbow outside of a small town called Erwin, which is just north of Hot Springs. They were forced to get off the trail for several weeks.

That year, they made it to Front Royal, Virginia, by day hiking and use of shuttles. In 1991 they hiked Front Royal to Harpers Ferry, West Virginia. In 1993 they started

again at Harpers Ferry when my Grandma Maxine’s feet did her in to the point of not being able to walk without pain. Trail-named Pipsissewa and Trillium for the wild flowers, My Grandpa Jack finished the trail in 1993 while Grandma Maxine went back to finish section by section over the 10-year span. Because Grandpa Jack went back with her to hike the sections she had missed, he has hiked much of the trail several times. They both made it to Katahdin, finishing Grandma Maxine’s hike, in 2000.

“The lesson for you from all this is stop hiking when you’re tired because that is when you fall down and break bones. Don’t try to push yourself through the pain because the next day you’re going to get up and hike again,” she told me in an email. “And of course Grandpa had no trouble at all.”

In 1998 my Grandpa Jack got to tell Earl Shaffer, in person, that his Appalachian Trail hike was inspired by Shaffer’s 1948 trek. Shaffer had showed up to Trailfest in Hot Springs, but Grandpa Jack said that he seemed like a “shy, short guy who just wanted some solitude.” He was reportedly grumpy at Trailfest when the crowds of hikers would follow him around.

My Grandparents have their Katahdin picture painted on the wall in Smoky Mountain Diner in Hot Springs, North Carolina. After hiking through, they decided they liked the place enough to live there. They built their home in a small town nearby.