Wayne Presby, owner of the Mount Washington Cog Railway, announced plans to establish “Lizzie’s Station,” 18 railway cars that would provide “upscale” accommodations and a restaurant near the Mt. Washington summit in New Hampshire’s White Mountains. The $14 million dollar proposal would station the cars at 5,800 ft elevation from mid-May through October and would have the capacity to host 70 guests a night. Critics argue that increased development would damage the fragile alpine tundra ecosystem, and a petition opposing the proposal has already garnered over 25 thousand signatures.

Presby proposed his plan on March 4th to the Mount Washington Commission. While Lizzie’s Station would be built on land owned by the Cog, the project requires a variety of permits from the New Hampshire government. These would be granted on the condition that the Cog settle property disputes with the state and agree to not engage in further development on the Mt. Washington summit.

In addition to drawing hundreds of thousands of tourists per year, Mt. Washington’s summit is the second-highest point on the 2,194-mile long Appalachian Trail and an iconic waypoint for backpackers and thru-hikers.

This is not the first time Presby has proposed luxury accommodations in the Mt. Washington alpine zone. He has tried to establish lodging near the summit since 2016, wanting to replicate the Gilded Age vacation destinations that used to grace the mountain. 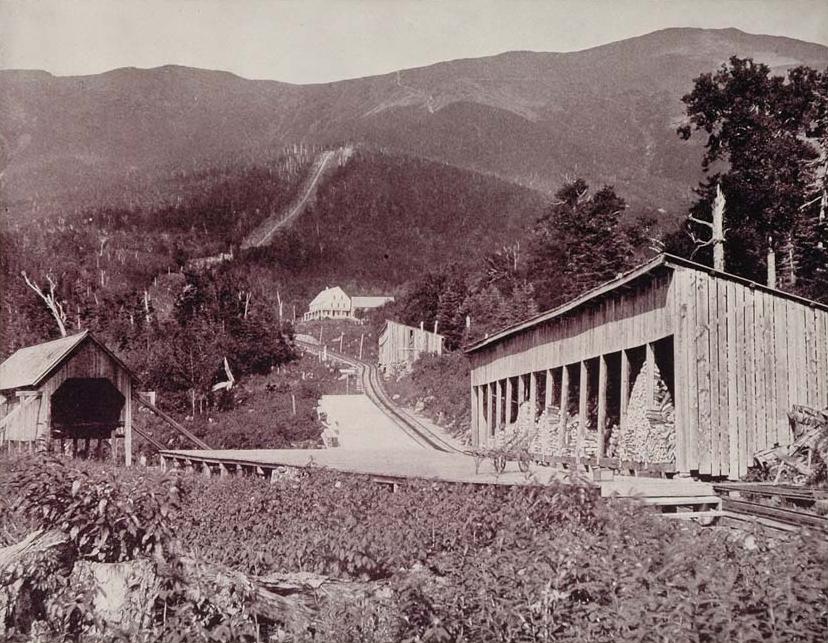 “There is a demand for it. People want to stay up on the mountain,” said Presby to the Associated Press. “The project would partly fulfill his vision of bringing back hotels that once graced the mountain in the 1800s,” continued the AP. These included the Summit House and the Tip-Top House, both hotels constructed on Mt. Washington in the 1850s. The Cog Railway, completed in 1869, brought visitors to the summit and the hotels there. 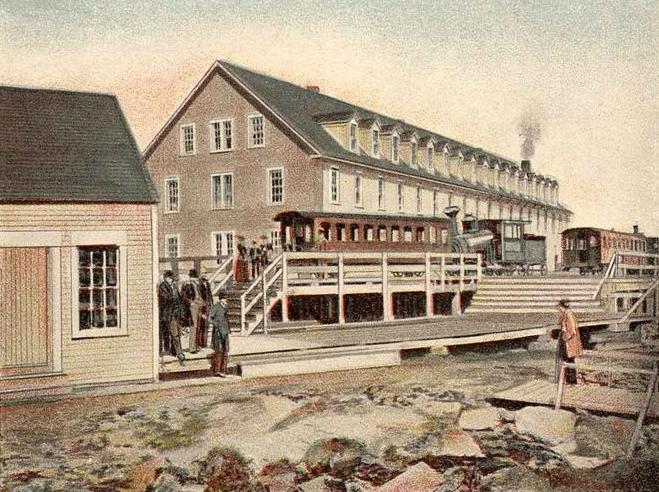 A 1904 picture featuring the Summit House on Mt. Washington. From a postcard published by Chisholm Brothers, Portland, Maine.

These and other “grand hotels” in the White Mountains hosted “an elite class of tourists,” according to the Conway Daily Sun. The Cog and the Mt. Washington hotels were examples of trends of Gilded Age travel, where wealthy Americans would travel by train to luxury accommodations for extended vacations. The advent of the automobile, and the economic and social turmoil of World War I lead to a decrease in popularity of these kinds of excursions in the first decades of the 20th century. There was a fire on the Mt. Washington summit in 1908 which destroyed the Summit House and damaged the Tip-Top house, and both fell into disuse and disrepair.

Presby’s December 2016 plans to build a 35-room luxury hotel fell through amid harsh criticism from individuals and environmental groups that the construction would harm the fragile tundra alpine ecosystem. There are several endangered species of plants and animals that could be irreparably harmed by extensive destruction of their habitat. The opposition groups included The Nature Conservancy, The Audubon Society, The Society for the Protection of New Hampshire Forests, Conservation Law Foundation, Appalachian Mountain Club (AMC), Appalachian Trail Conservancy, and a grassroots coalition of activists called Keep the Whites Wild.

The current proposal to station sleeper cars on the mountain from May-October was met with reactions ranging from hesitant neutrality to vehement opposition. This current proposal would need less development near the summit. Chris Thayer, the AMC’s representative on the commission called the plan “creative,” and David Govatski, a local retired U.S Forest Service forester expressed hope that it could ease congestion on the summit. But both expressed hesitation about the plan and its potential impact on conservation efforts. It could cause significant disturbance to the ecosystem to install the waste-water pipe and upgrade the existing fiber-optic cable necessary for the project. 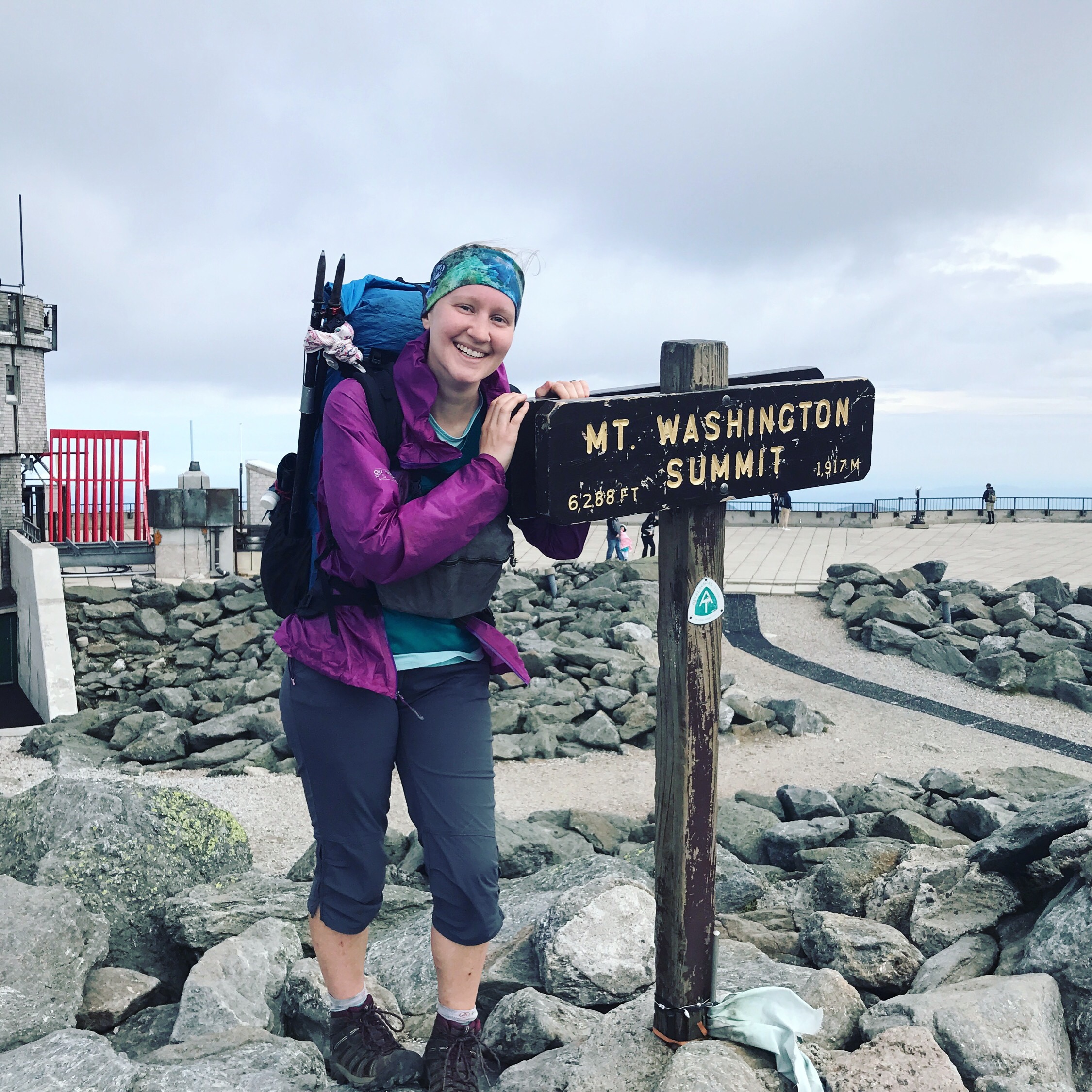 The already-developed summit of Mt. Washington. Photo via Snap.

In an op-ed in the New Hampshire Center for Public Interest Journalism, Jamie Sayen called the Cog Railway a “vertical scar” on Mt. Washington, saying that the railway and the proposed Lizzie’s Station were “relics of the nineteenth century’s exploitative land ethic.”  The change.com petition opposing the development emphasizes that “the ecological impact…cannot be understated,” and that the impact on the viewshed could also be significant.

“I know people are concerned about the impacts on the area up there, but there’s been a lot of impact there over the years anyway, and there continues to be,” said Presby of the original hotel plan, as reported by Backpacker Magazine in 2017. At the time, he said to hikers who opposed the hotel, “Maybe you shouldn’t be climbing on Mount Washington.” Of the AMC’s primitive backcountry Lakes of the Clouds Hut, the only overnight accommodations in the area, he said, “why should the AAC be the only one offering a hut? …I wouldn’t want to stay there.” 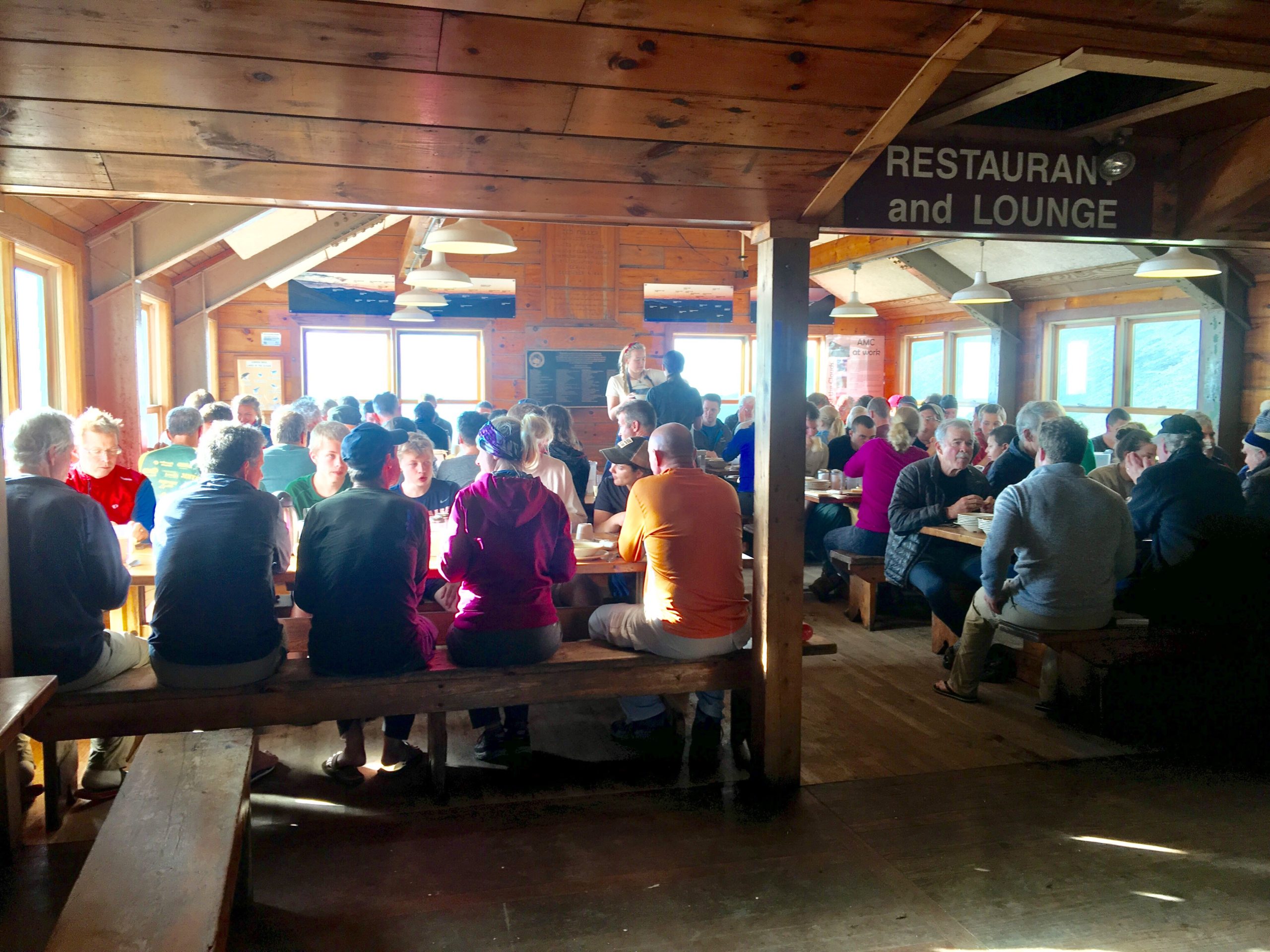 Though dinner at Lake of the Clouds hut can cost you over $100 per night for a bunk, these accommodations are certainly not “luxury” — at least according to front-country standards. Photo via Snap.

For years, there has been tension between rugged backcountry hikers and the front-country amenities atop Mt. Washington. This touches on a deeper, more fundamental tension— people want to enjoy what the backcountry has to offer without pooping in a cat-hole, packing out their trash, or even breaking a sweat. 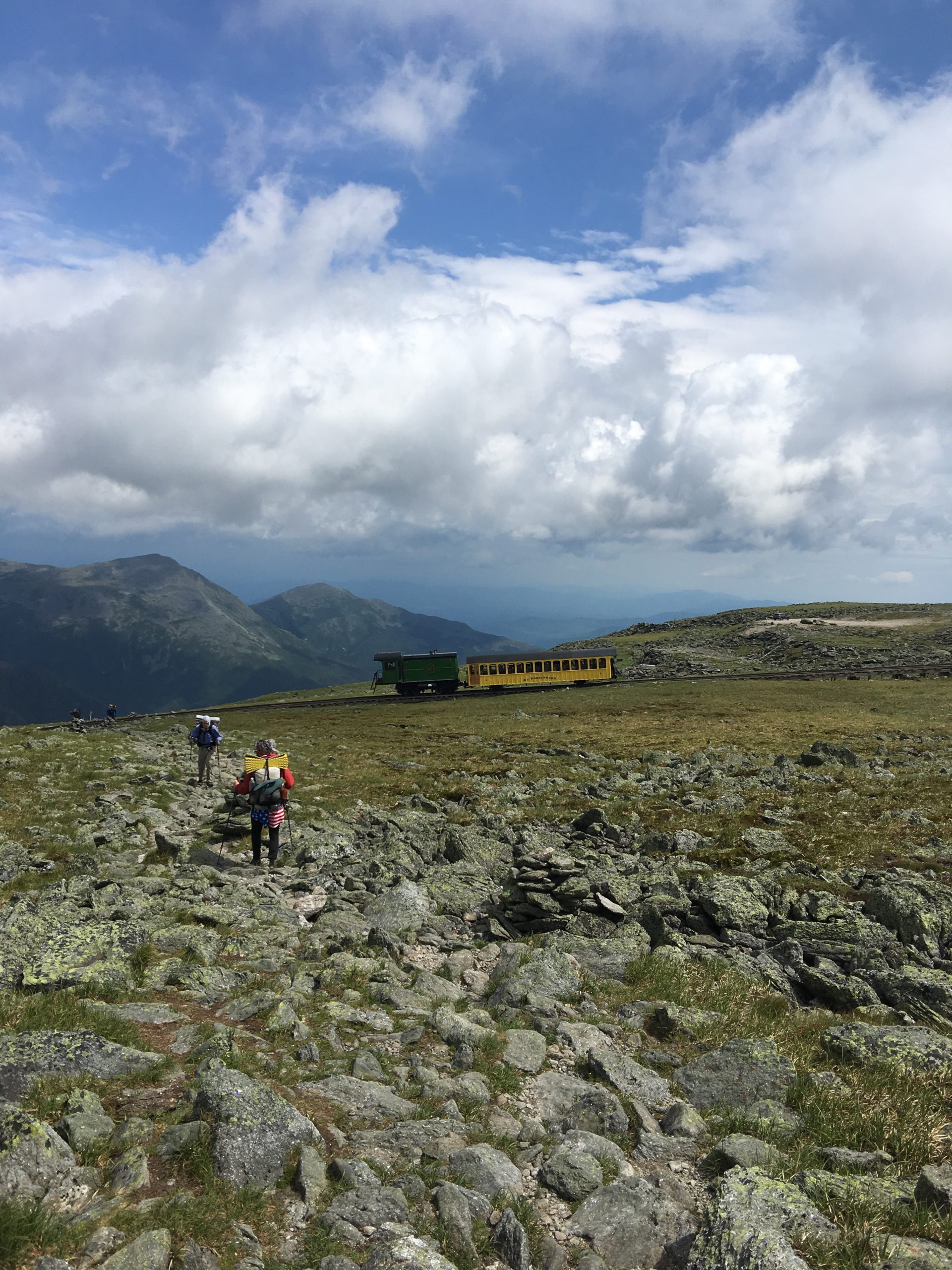 Appalachian Trail hikers crossing the tracks of the Cog on Mt. Washington. Photo via Snap.

This is not to say that there should not be beautiful natural places accessible by car, for those who might not be able to make the difficult treks (even more accessible would be public transit to trailheads, but that’s another conversation). But when that development starts irreparably harming local fragile ecosystems, it becomes harder to justify. Humans do not have a “right” to sleep on Mt. Washington. As Sayen said, “These lands rightfully belong to the flora and fauna that are hardy enough to flourish there.” Just because there is demand does not necessarily mean it should be met.

As Mt. Washington is seeing an increasing number of visitors every year, it will become harder and harder to protect its flora and fauna. Maybe Mt. Washington is a “lost cause” as far as a backcountry summit—as the most visited site in New Hampshire, the government is unlikely to willingly relinquish the revenue that visitors bring. But as one of the only alpine tundra zones east of the Mississippi, any proposal for further development should be held to a standard as high as Mt. Washington’s summit.