With one week left until my official start date, I recently realized the whole preparation and planning stage of my thru-hike is basically over. What’s left is largely me running around my hometown trying to eat as many burritos as I possibly can (because everyone has warned me against east coast Mexican food) and scrolling endlessly (and enviously) through the Instagram feeds of people who’ve left already. Planning this hike has been the epicenter of my universe for the last 6 months, and now that the stage is set I’m feeling pretty impatient to get going.

But I’ve still got a week to go and not much to do, so let’s parcel up all the planning I’ve done so far, ay? Here’s Becky Booroojian’s official pre-hike scorecard:

Four. I’m pretty pleased with how much I was able to break in the gear I chose, especially because each trip helped me figure out a thousand things that made the next trip easier. In retrospect, I wish I had gotten another trip or two in there, but I still had a job until a couple of days ago, so what are you going to do really? If I learned anything, it’s that I’ll probably still be ironing things out well into the first half of my hike.

One. So look, I’m not saying that I’m directly responsible for the end of California’s drought, but I am saying that when I decided to thru-hike the AT last year, my beloved home state was parched with zero respite in sight. I am also saying that while it certainly didn’t rain every day between that decision and today, it did rain during every single backpacking trip I went on to prepare, as well as all the random day hikes sprinkled throughout. Every. Single. One. During my last trip, it rained with such ferocity that my friend and I didn’t see another soul the whole weekend and the park closed the day after we left. I did get to take this cool picture of two creeks converging, one of which was near a mudslide somewhere further uphill. 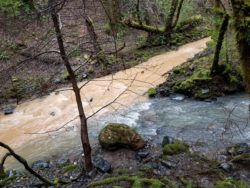 Anyway, I know that sections of the AT are experiencing their own drought issues, so the real test will be if the rain travels with me. We shall see.

I ate this donut yesterday: 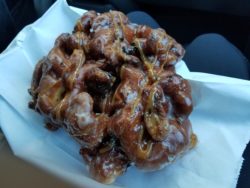 I went on a trip with my mom over New Years, and it was on the chillier side. When it came time to stop for lunch, my mom wanted to keep going since we had the biggest hill ahead of us and it was too cold to not be moving. However, there is no discomfort more unpleasant to me than being hungry, so she went on ahead while I stuffed my face as fast as possible. I strapped my pack back on and tackled the hill with a bag of fudge stripe cookies in hand. I stuffed the cookies into my mouth as I panted and gasped my way up the hill, which probably looked disgusting, but since there was no one around, who really cared? The top of the hill rewarded me with a fantastic view, and I still had more fudge stripe cookies to eat while I soaked it in. I’m not sure if that moment of reaching the top of the hill or the fudge stripe cookies were the high point, but I do know the combination of the two was magical.

Same trip. I tried that “Nalgene full of boiling water in the sleeping bag” trick one very cold night, but didn’t screw the lid on tight enough. We all know how this story ends.

Nine and a half. As a runner with oddly close-set toes, this is the first time I’ve had a full roster of toenails in about a year. While one of my big toes hasn’t grown back normally since the first time it was knocked off (hence I am awarding it the half), I am operating with a largely healthy batch of nails for the first time since I did a Ragnar relay over the summer with a slightly too-small pair of trail runners. Here’s a great, albeit gross picture of the damage done from that (all of those bleeding toenails fell off):

This is probably just me, but I am REALLY fascinated to see how my toenails will hold up over the course of the Appalachian Trail, so we’ll be checking in on them frequently because this is my blog and I get to decide what’s interesting and important.