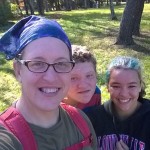 In February this year I had to delay my start date because I was kind of in the middle of helping my friends rebuild a new home and it would have been a dick move to abandon them. It really shouldn’t have taken more than three or four months but as we tore more apart we kept finding more and more that needed replacing, so in the end we have basically built a brand new home on top of the existing foundation.

I was discouraged for a while, but I try to look at the various things that happen to me in life from a positive aspect and I have found a few benefits to not getting on the trail when I had planned:

I have found that getting the upgrades makes me feel pretty good about not being on the AT just yet, but I have been told I just really like buying myself new toys…I can not deny that.

I Need a Recharge!

With all that house stuff going on I really needed a break to recharge my soul in nature and I had all this new gear that I only played with in my bedroom, so I took a few days off and went to the woods! I chose an outdoor recreation area not far from my house, mostly because it was convenient and I didn’t feel like driving terribly far. Rogue and I got there a few hours before sunset and decided to start off with a few mile hike to warm us up for the next day. After we got back to camp I got her set up with this new light weight tie-off cable I made for her that she will be carrying on the AT. Then I proceeded to set up my home for the night between two trees. We both had a little to eat and then I laid down in my hammock and wrapped up in my poncho liner. 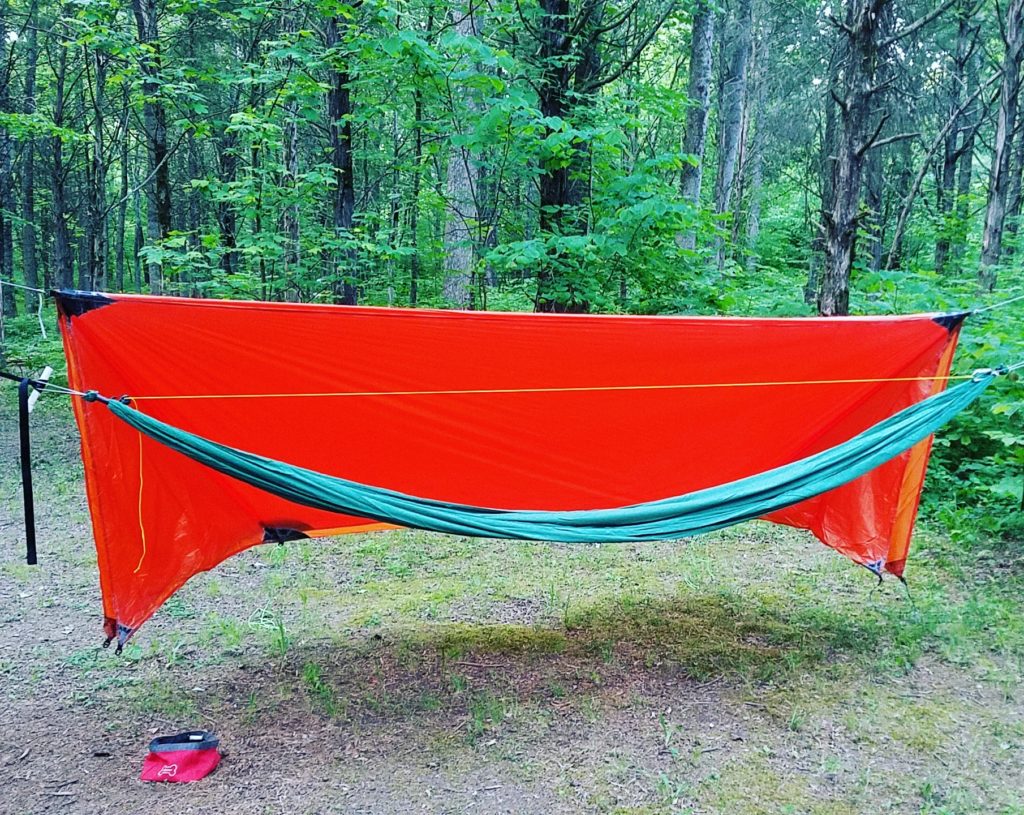 For some reason when I packed up earlier that day I thought my old Army poncho liner would be sufficient considering the low would be around 58 that night, but I started getting cold and after about 45 minutes of trying different ways to wrap it around me in the hammock, I came to the conclusion that an underquilt or some sort of barrier is needed even in the summer when sleeping in a hammock. Of course I didn’t bring anything else with me so I put on more clothes and that really didn’t help either, so I made the decision to drive home at 11 pm to grab more gear so I could get a good nights rest. I haven’t bought or made my underquilt yet so I just grabbed my Kelty 20 mummy bag and we headed back out. I found that if I slept with it open at the top and used my poncho liner as a blanket I was just right and I slept quite good until 8 or so in the morning.

I got up boiled some water for my oatmeal, snacked on some trail mix and while my oatmeal was cooling off I packed up camp so we could hit the long 8-mile trail and then some that day. I gave Rogue a bit more water and packed up the food that she didn’t eat, then we hit up the water point to top up all of our containers. She carries two liters on her and I carry four on myself when we go out for longer hikes. I’m sure some people will think that is insane, but that is what we easily drink on a warm day full of sweating and exercise. In this case we could have gotten away with less considering about 1/3 of our 10 mile hike followed a creek, but that won’t always be the case.

We started off our hike with a side trail down to the Ohio River so we could score a good view and she could go swimming for a little while before we got into the bigger miles. It is a pretty impressive river after all and I never really see it much even living as close as I do to it. 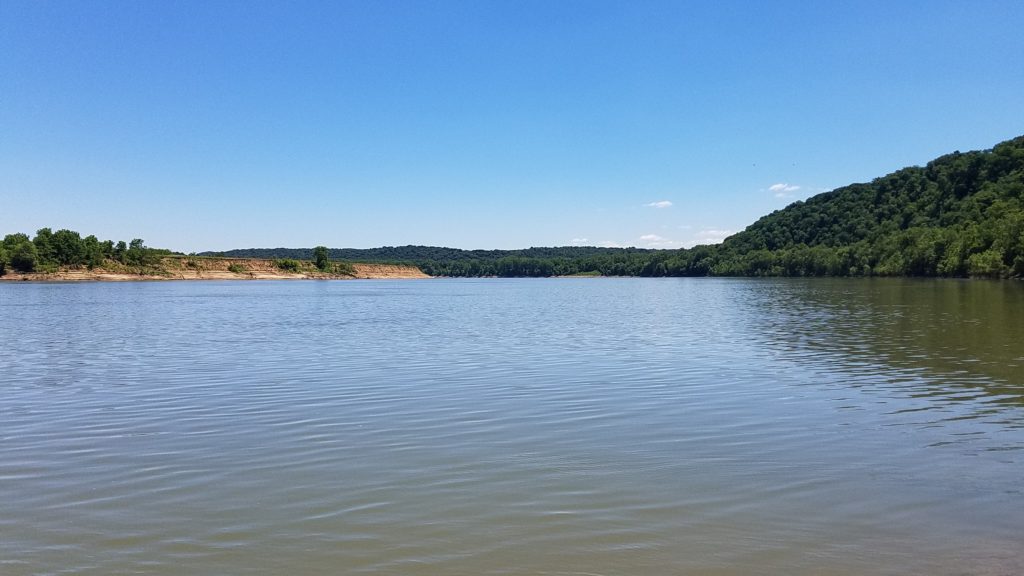 View of the Ohio River from the boat ramp in Otter Creek Outdoor Recreation Area.

From the river we moved on to the main trail we had planned to do that day, which was Otter Creek Trail. Most of the trail had a pretty impressive canopy of tree leaves covering it, so we really didn’t see a whole lot of direct sunlight on us that day which made for a slightly cooler hike. Every time we came to an off trail that led to the creek Rogue would practically drag me down to it so she could swim around a little and cool off in the water. 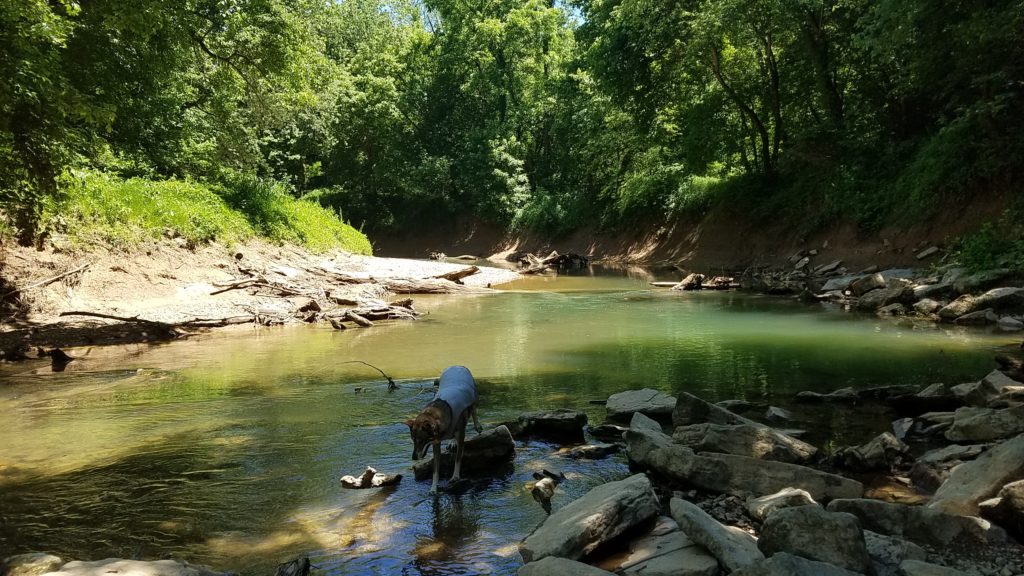 We have this one spot that we always stop at and I let her run around without her pack on for a little while. About two miles later we stopped for lunch and she decided to lie down in the water while I ate, though she had no issues coming back out when I busted out the peanut butter and tortillas. 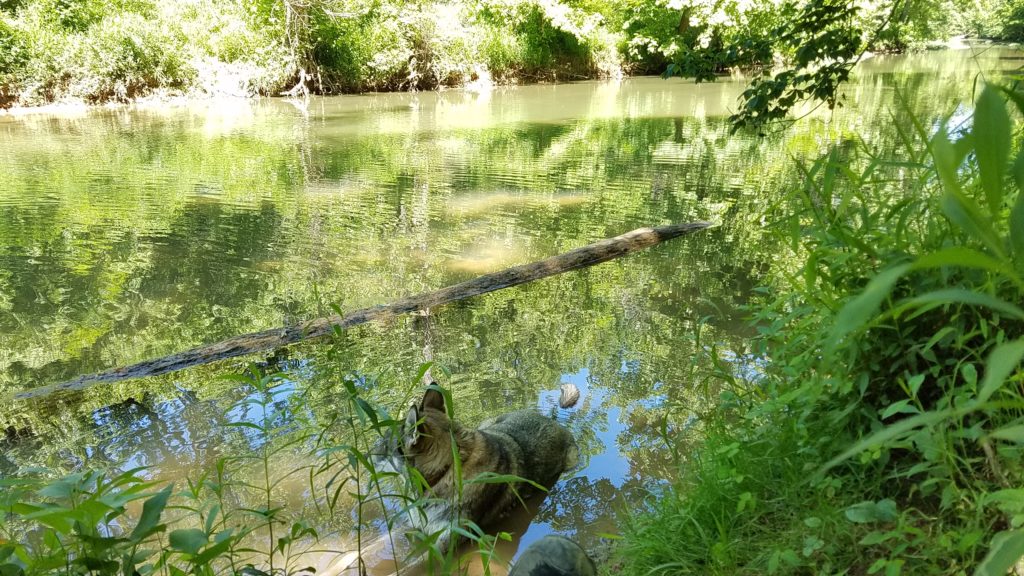 Another mile or so and the creek was left behind and the remainder of the hike would have no water resupply until we got closer to the campgrounds aka the end of the hike. I didn’t even think about topping up my Camelbak at any of our stops and I ran out of water in it around mile 7.5. I honestly didn’t realize I consumed as much as I had (major downfall to a Camelbak), but I always carry my Nalgene bottle with me for that extra liter, which is mostly used for cooking and cleaning in the evenings. Also, around that mile mark Rogue was pretty sore and hot, so we took a break and she decided she needed a 20 minute nap before we could finish up. I ate a little snack while waiting on her to get ready and decided to check ourselves for ticks since I saw one crawling on her pack and I knocked two off my pack. Apparently, we sat down in a bad area, because I kept finding them crawling on me, but didn’t find any that had attached when I started checking.

After we got back on the trail it took us about an hour to finish up the last two miles, going at Rogue’s pace. She was really sluggish when we got back to camp so she just laid pretty much in one spot while I got things ready for the night. I gave her one of her pain pills that her vet gave me since she has mild arthritis in her front left leg and offered her some of her food, which she ate, while still lying on her side. She stuck her snout into her water bowl from the same spot too, which I found hilarious.

I decided I would take her back home that night so she could sleep in a more comfortable place (also, it was my daughter birthday and I wanted cake and massive amounts of barbequed meats), and I could do a better job checking her and myself for ticks with some proper light. I ended up finding seven on myself that had attached and I picked 19 off of her, mostly on her front legs in the short fur.

I left her home after that and decided to bring my other puppy back out with me to see how he would do for the night. We made our way back to the campsite and I finished setting up my bed. I thought I would see if he would be willing to sleep in my hammock with me, but he wanted no part of it! So, he was hooked up to the same tie-off that I had Rogue attached to and I went to sleep after staring at my phone screen for a while reading peoples updates on social media. The following morning just consisted of packing up and heading home, I got the recharge I was after and had so much energy (after some coffee) that I spent most of the rest of the day working at the house and I got more done than I had in a while.

I learned a few lessons from this little trip that will be taken with me to my actual shakedown hike in a couple of weeks:

I was a prospective 2016 AT NoBo thru-hiker, but leaning more toward a SoBo or flip-flop now. Also I'm a retired Army Sergeant First Class that lives in Kentucky with my three teenagers. I'm newly back into hiking and backpacking after some time away from it while serving in the military. I bring into these new adventures a completely different outlook than I had 20+ years ago when I originally wanted to do this hike.