Forming a Tramily, the Trials of Bear Bagging, and Prepping for the Smokies

In the last week and a half, I’ve crossed the border from Georgia to North Carolina, crossed the 100-mile marker, visited Franklin, N.C., the NOC, and Fontana, and hiked through some of the best and worst weather I’ve seen so far. North Carolina definitely ups the difficulty level of hiking. The climbs are longer and steeper, and there are more of them than ever. 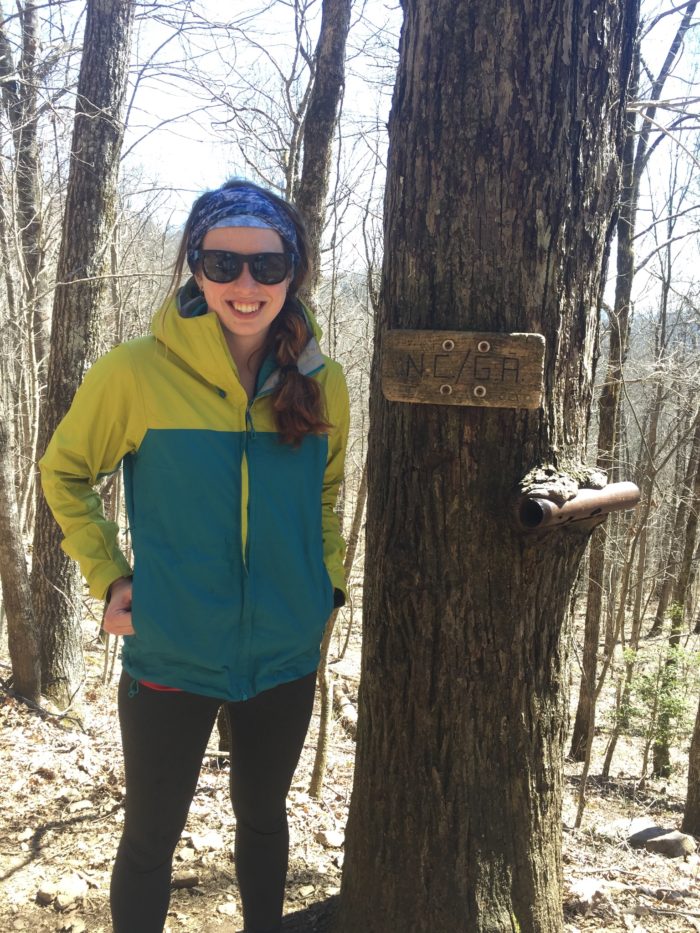 Still day one of my braid, and already messy.

The first few days coming out of Hiawassee were awesome. It started off pretty chilly, but soon warmed up to some of the most beautiful days I’ve had on trail so far. Crossing into North Carolina was excellent — it feels great to have accomplished one whole state. Of course, North Carolina immediately welcomes you with a massive climb up a mountain. Still, it was great to encounter our first few balds (mountains with just grass on top instead of trees everywhere) and fire towers. Two days after crossing the Georgia-North Carolina border, we climbed Albert Mountain (the steepest climb I’ve seen so far) and hit our first 100-mile marker. 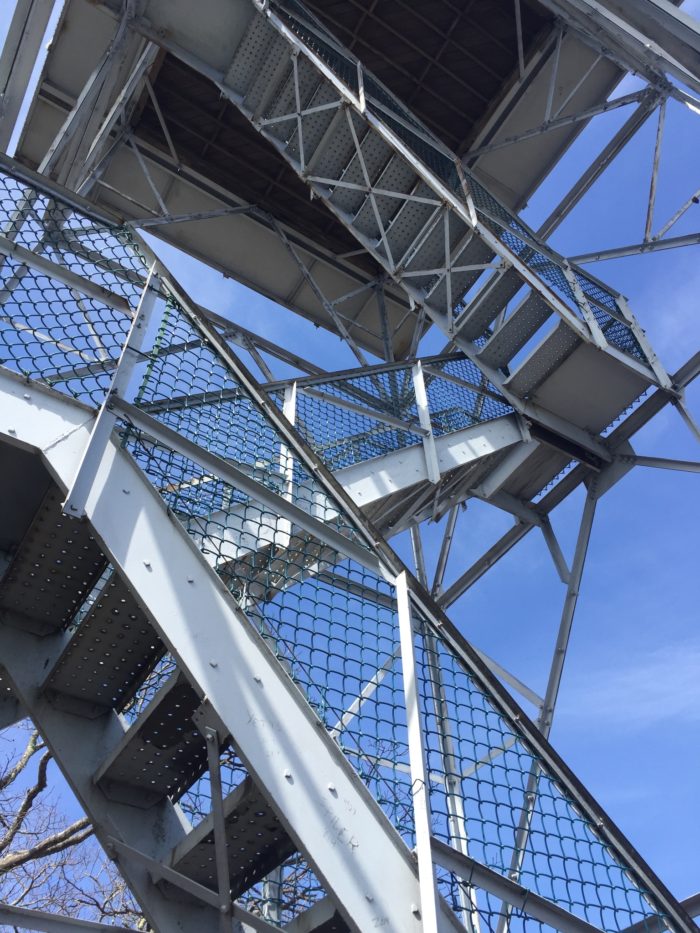 Since leaving Top of Georgia, I’ve been hiking basically every day with a few hikers: Buck and Robin (who are also blogging for The Trek), and Squid Kid, with occasional guest appearances by others. It’s great to have a group to plan and camp with, and to commiserate with when things get hard. 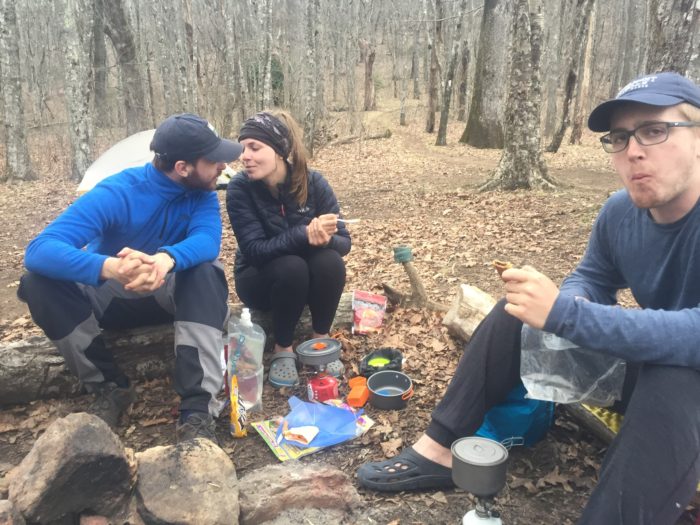 The fam, not even shivering while cooking dinner for once.

The challenge of bear bagging.

North Carolina does not believe in bear infrastructure. Basically everywhere on the AT has black bears, and you’re supposed to keep your food out of reach so bears don’t get at it. Georgia makes it easy for brand new hikers, and basically every shelter and campsite has boxes or cables to secure your food against bears. As soon as you cross the border to N.C., you have to fend for yourself and try and hang your food in trees.

To do this, you need to tie your rope to a rock, throw the rock over a tree branch, and hoist up your food. It’s a huge pain, and no one does it well. Like, it doesn’t sound that hard, right? But you have to find a decent tree, and an acceptable rock, both of which involve tramping around in the brush away from camp. Everyone else nearby is also trying to find a decent tree, which can be super difficult in some places. Then throwing your rock is hard — your rope gets caught in smaller branches, you can’t throw high enough, your rock swings right back at you. And if your hanging branch is too thin, you’ll snap it off trying to hoist your heavy-ass food up, and have to start all over. Bonus points if you try to do it in the pouring rain. 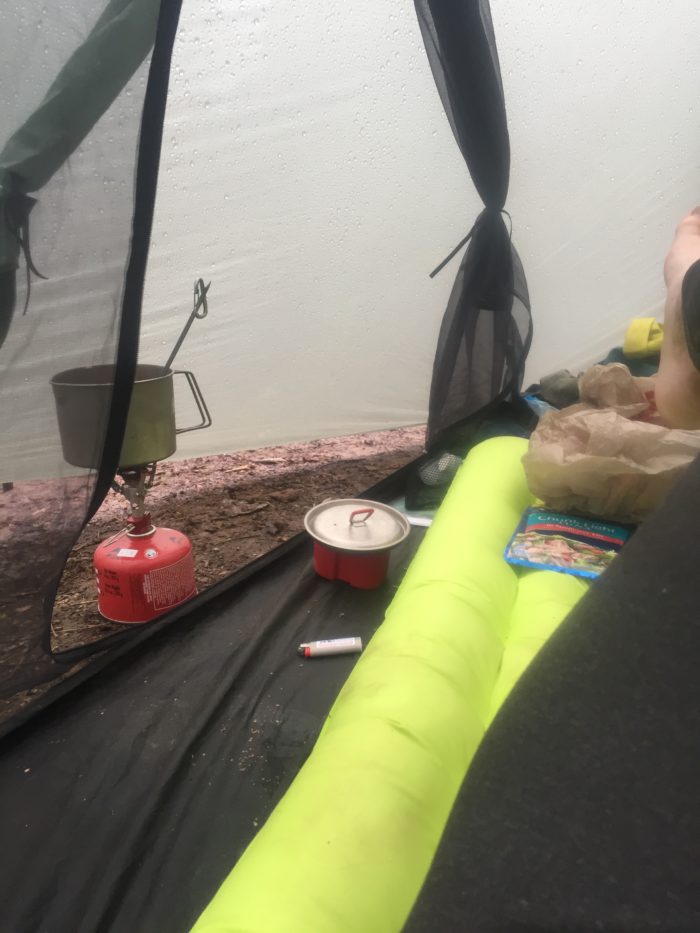 Franklin is an awesome little town.

The day after Albert Mountain, we took a short day into Franklin. The people in Franklin are working to make it the best town on the whole AT, and so far it’s definitely been one of my favorites. We spent most of our time in Outdoor 76, the outfitter/bar downtown, and at the Lazy Hiker Brewing Company. It was St. Patrick’s Day, and they had a bar crawl going on and live music. It was amazing to be able to sit outside in the sun and hang out with the many hikers in town.

Side note: I stayed at the Budget Inn, which I had heard some not great things about. People had said they had bedbugs, the rooms were filthy, etc., but when we stayed it was fine. Like, it’s old and kind of worn down, but seemed clean and the owners were nice. 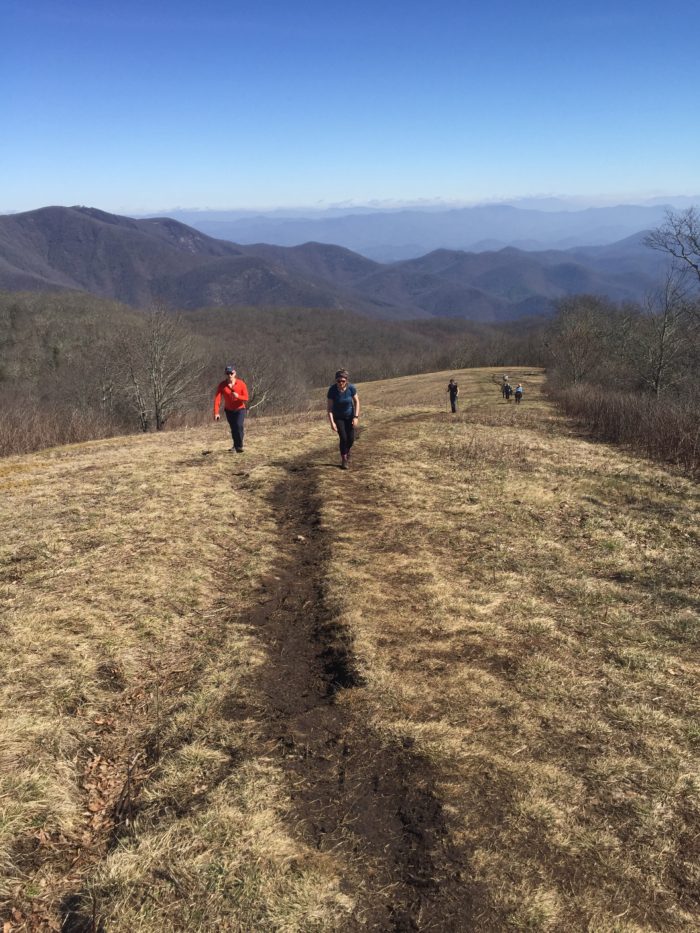 This isn’t even a part of the trail – it’s extra, bonus hiking.

We had some really awesome trail magic coming into and out of Franklin. When we got to the road crossing to go into Franklin, we had no idea how we were actually going to get to town. Our plan was basically “hitchhiking? Call a shuttle maybe?” But when we got there, we immediately ran into a former thru-hiker and his uncle giving out snacks and soda. After some snacks, they offered us a ride into town. (Thanks, Zookeeper!)

The next morning, we had heard that if you stood outside the Budget Inn at 7:15 a.m. a bus would come pick you up and take you to a free pancake breakfast. So we stood outside, and a bus did in fact take us to the First Baptist Church in Franklin.  It turns out the congregation makes pancakes and bacon every single day from mid-March to mid-April just for hikers. Later that day, after we got back on the trail, we encountered another former thru-hiker giving out hot dogs. We were well fed that day. (For the record, I had three hot dogs. I feel like I’m starting to get hungrier, and I’m going to use the number of hot dogs eaten in one sitting as my metric.) It is kind of crazy how kind and generous people around the trail are. And it makes former thru-hikers excited to come and pass on the kindness they received while they were hiking. 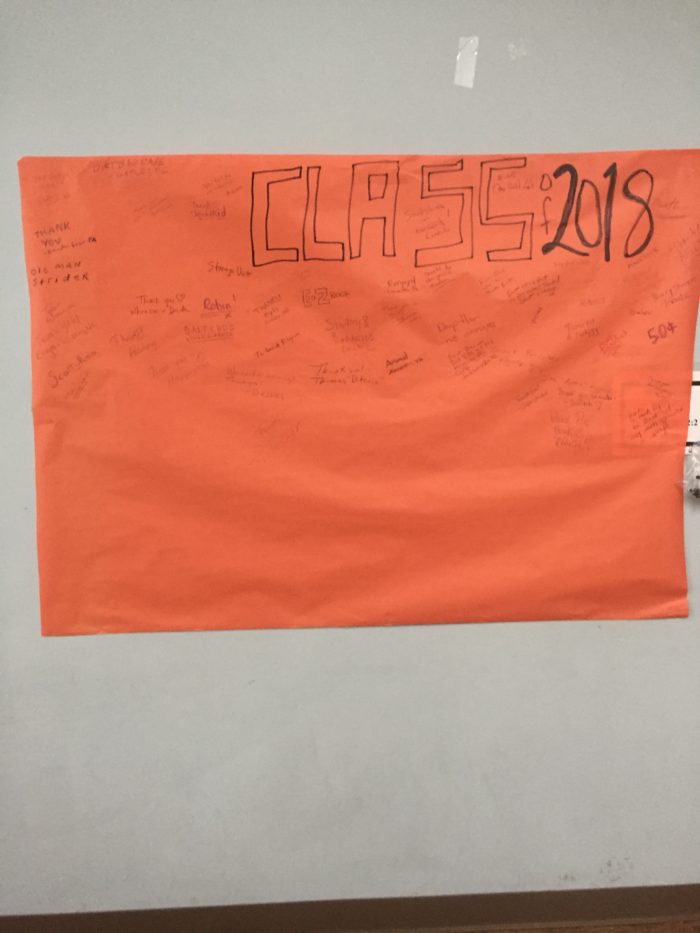 Still working on filling up the 2018 banner. I would highly recommend stopping at the pancake breakfast.

While the first days of North Carolina were this beautiful fantasyland of sun and hiking in tank tops, the last few days have been sort of brutal. For one, the terrain got really challenging. The elevation profile going into and out of the NOC looks like this: V.

So you get a full day of going downhill, which made my knees feel like someone was hitting them with hammers, and a full day of going uphill. It rained for most of those two days. Then it snowed. I knew I would probably encounter snow at some point on the trail, but it was disheartening to wake up and have to pack up a tent that’s covered in ice crystals. We hiked six miles while it was snowing, and called it a day at lunch and stayed in the shelter trying to stay warm and dry the rest of the day. The next day we descended into Fontana in occasionally knee-high snowdrifts. Of course, hiking through snow quickly turns more into barely controlled careening down the side of a mountain Then the snow turns into mud, and everything is still slippery, but now with added dirt. 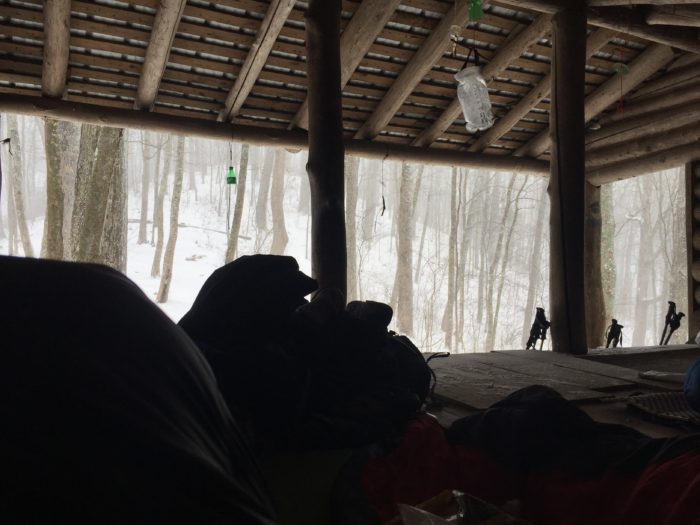 When it looks like this outside the shelter, sometimes it’s better to not be hiking.

So, after these last few days of challenging hiking and weather, I needed the day off.

I’m really happy for the chance to rehydrate and dry out my possessions before trying to hike into the mess of snow and rain that will be the Smokies. 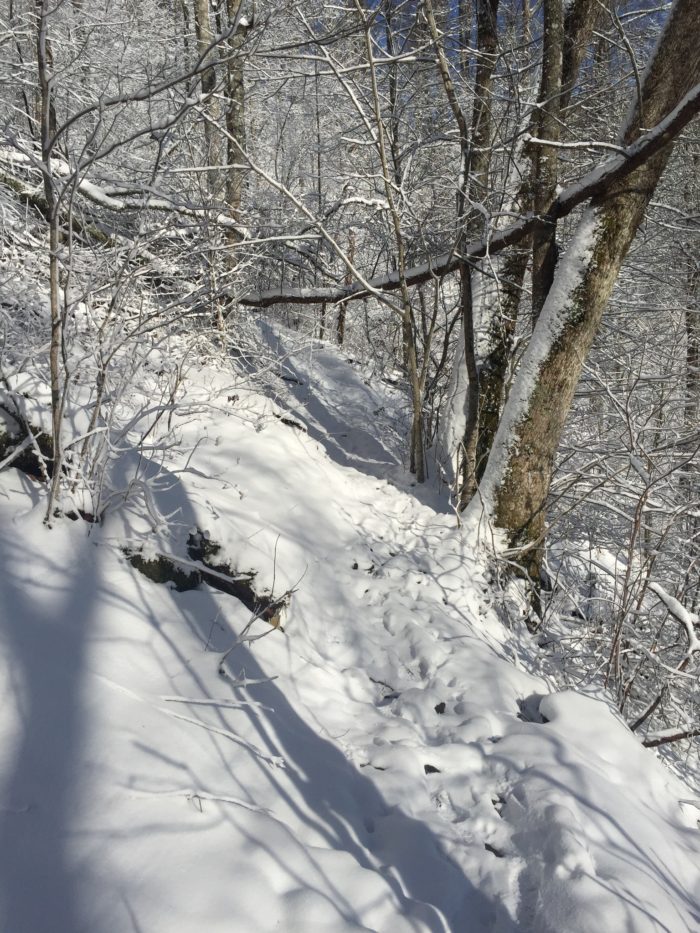 Really hoping the Smokies don’t look like this the whole time.