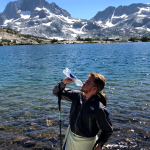 The Process of Postponing a Dream

Unless you’ve been living under a rock or have the hiking style of Grandma Gatewood, you’ve no doubt noticed that many hikers are lamenting having to postpone their thru-hikes as the spread of COVID-19 continues to rapidly grip the world.  As someone with dreams even loftier than the traditional trek, I’ve decided to outline my process as it pertains to my current situation.  I am currently postponing my attempt at a Calendar Year Triple Crown until further notice.  I hope that the words that follow do not spark debate, but rather offer insight and guidance to those who may be in the midst of making this difficult decision themselves.

On February 17, I set out from the Southern Terminus of the Appalachian Trail in hopes of completing it relatively quickly.  My primary fear of disease at the time was norovirus, an illness all too common to the AT.  In the back of my mind I knew I would be far too early to actually have a large chance of contracting this nasty little bug.

My plan was to move fast throughout the entirety of phase one of this trek, and norovirus typically required there to be a lot of people on trail in order to be spread easily.  Ergo, I would have minimal risk when it boiled down to the probabilities.  COVID-19 was not even on my radar.  At the time, I had heard news stories of the virus spreading in China as well as a few US citizens who had contracted it while aboard cruise ships.

As the weeks went by, I happily suffered through a wide variety of experiences.  Right off the get-go my right knee decided it had different plans than hiking 7,700 miles in one year.  I endured limping for over 100 miles, blizzards, thunderstorms, and blisters, among other various challenges consistent with any early starter.  Once my knee had completely healed up, I suddenly realized that if could limp over 100 miles through knee-high snow that I certainly could accomplish my goals.  There was nothing that would be able to take me off the trail unless it was to be as severe as a broken femur.

All the while I was battling my own physical struggles, the world was rapidly changing around me without my noticing.  At first, there was the classic reference made by loved ones that I was in the best position possible.  I was away from large metropolitan areas, in the woods finding mostly solitude throughout the day.  Whatever happened, I was assured that I would be golden.

It wasn’t until I had hit the 700-mile mark that things began to take a different tone.  In the beginning of this pandemic, the focus had been about how I could easily avoid contracting the virus by simply continuing on.  As time progressed, a few things changed that clearly highlighted that to take a pause was the correct choice.

In the wake of this decision, I can’t help but be hopeful that eventually I’ll be able to return to trail soon.  In some ways, refraining from shaving my nasty beard is a physical representation of that.  The likelihood is slim, but in times such as these sometimes hope is the best course of action.  That being said, while my short stint on the Appalachian Trail may have taken an unplanned pause, I can’t help but express gratitude for the miles I was able to log in the past month.  The trail is not one of “my rights,” and to be able to look back at the incredible, numerous experiences I’ve had is no doubt a blessing.  For that reason, I’m clinging to the happiness I demonstrated each day while on trail.

I’m not going to tell you to get off trail or to postpone your hike.  The ATC, PCTA, and CDTC have already done that and if you’re not going to listen to them you certainly won’t listen to me.  Rather, for those adamant about continuing on I simply urge you to exercise extreme caution when traveling.  The thru-hiking community is predominantly known as a horde of loving, smelly people.  Please do not tarnish this reputation by having a hand in being responsible for the death of a grandparent.

Feel free to reach out to me in discussing your decisions.

Just another young man attempting an extended walk. I've been captivated by nature since my early childhood, and this fascination has blossomed into interesting experiences over the years and various adventures. Fresh out of college, I'll be striving for a Calendar Year Triple Crown starting NOBO on the Appalachian Trail in early February!