I have been giving consideration to the camera setup I want to use when out on the trail. I haven’t actually owned a dedicated camera in years (likely 15-20 years ago) and I’m hesitant to buy one now. I’ve been fairly happy with the photos I can take on my cell phone, but with writing posts for here and other locations, I find that I’d like some higher quality images to use along with them. This led me to looking into the Aukey 3 in 1 lens attachment to use with my cellphone. The price was attractively cheap, and given the small size, I figured I’d benefit from adding almost no weight to my overall pack. However, I have now learned the  lesson that cheap is all too often a clue that a product could be a waste of your time. 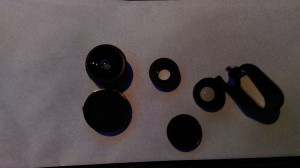 The three lenses, laid out with the two lens caps, and the mounting clip

As the name suggests, the kit came with three lenses, along with a mounting clip to attach them to your phone. Situated correctly, the lenses will sit over your phones camera and enhance the view. Unfortunately, the clip is too narrow to allow proper mounting while my camera is in its case, so I had to remove the case sleeve each time before I wanted to take a picture. After that, it takes a few seconds to line the lens up properly, but it’s not too difficult. I started with the wide angle fisheye lens. The picture came out fairly workable, but since it’s a fisheye effect, other than a few choice photos where you want that effect, I don’t see it as being particularly helpful. 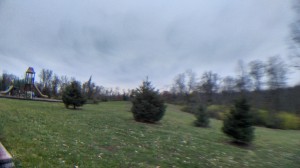 Fisheye example. The trees get all bendy, and it’s a little bit like how I see the world after a few hearty dark beers. I tried to get an up close picture of my roommate’s cat with this, but he wouldn’t sit still long enough.

The next was the wide angle lens. This actually is part of a two piece set with the macro lens, with the wide angle screwed in over top of the macro to get the effect. This was probably the most helpful of the three, as it would let you get some decent landscape shots, but it didn’t seem like it was a significant improvement over what my camera was already capturing. 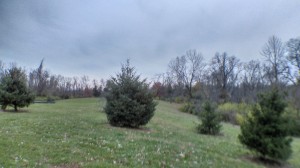 Here’s the shot with the wide angle lens 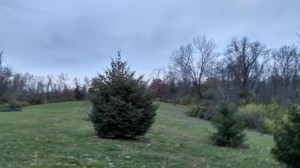 The same view shot without the wide angle attachment

Finally, the macro lens. This was the one I was actually the most excited about, as it’s supposed to let you take clear extreme close up shots. The ad showed someone getting a sharp clear picture of an ant that looked as large as life. I was considering all kinds of cool shots I could get out in the woods with this. Unfortunately, the actual pictures that came out were…disappointing. 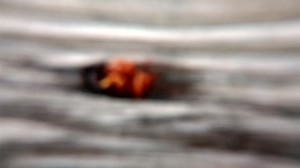 This is the macro shot, taken of a close up of a seed sitting on a wooden park bench. One night a few years ago I drank an entire bottle of jagermeister along with a few large cans of Red Bull. Apparently, according to the good folks at Aukey, my vision that night was “macro.”

Overall, my recommendation on this would be a do not buy. The lenses aren’t going to get you much more than the camera on your phone is already capturing, and given their small size, I’m betting that at least one of these would get lost by mile 30 on the trail anyways.

Disclosure: This product was not donated for review. If you’re still interested in purchasing the Aukey 3 in 1 lens kit, you can find it here.