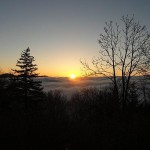 Projecting my first day on the trail..

March 10 (Sunday) 2013…I stood in the parking lot of Big Stamp Gap and watched my friend’s truck disappear down the road. I wonder, “Is it too late to change my mind and get the hell off this mountain.” Even the sound of the truck was now gone. RATS!!! Trapped! The question had been ask and totally answered.

The sun refused to peek through the steel-gray snow-filled clouds. A large flake of snow drifts lazily in front of my face. I look off to the west and see a wall of white moving toward him. “Oh, crap…not snow!? My first 30 seconds standing on the trail and here we go with the taunts.” I shoulder his pack and make a few strap adjustments. Heavier snow starts to fall pushed at acute angles to the ground by the wind. I start the hike back to the top of Springer. After a half an hour of walking south a small clearing comes in view with the summit of Springer. The plague…the beginning…the end…and the first white blaze painted on a rock sticking up from the gut of Springer Mountain. Thoughts of Gator Gump’s naked ass planted on that plague shot through my head. I rubbed my forehead repeatedly saying, “Go away mental image. Go away mental image!”

So many dreams and adventures had begun right here on this spot. So many hoped for dreams and adventures begun only to end right here. I wondered were my dreams were going to lead—fulfillment or failure. But like Scarlet, I’d think about that tomorrow. More snow covered the plague as I stood there looking at it. The first white blaze disappeared as I watched it blending then disappearing with an increasing blanket of snow. With the ubiquitous  photograph taken I began to retrace my now disappearing tracks in the snow north on the Appalachian Trail returning to Big Stamp Gap.

At the gap I searched the parking lot for my friend and his truck, but no luck. A loud snap sounded in my head as my life line back to hearth and home broke. What had I gotten myself into, you old fool? What the fuck were you thinking? The parking lot was a clean slate now with more layers of snow quickly being added. I thought briefly about “writing” my name in the snow as some proof I had been there. My hero Zach Davis had done it. But his first name had only four letters and mine had six letters. It wasn’t going to happen. I hadn’t drunk enough water. Besides, I couldn’t make up my mind which font I was going to use—Old English Script or Helvectica. Oh well…just get moving…NOW!!!! There was a traffic jam of thoughts in my head as the trail and I made for Stover Creek Shelter. Stover Creek Shelter was my first night’s goal. A massive distance of about six miles for the first day. Maine was getting closer. I could feel it. WooooHoooo! This boy is on fire (my apologies to Ms. Keys)!!!

Wait…! Was that Stover Creek Shelter walking toward me? (Hey…give me a break. This is my world and shelters walk toward me…I don’t walk toward them. Work with me folks.) Yeeeeahhhhh!!!! First shelter appeared out of the snow and forest. Do they have mirages on a snowy mountain top or is that only in hot desserts? Nope…it really was the shelter. It sure looked like the pictures I had seen of it. Yeah, real wood holding up a roof…it was my night’s goal shelter. I took a look around the shelter and wondered where the switch was that turned on the heat for the shelter. How rude!!! No switch! No heat?! The ATC was going to hear about this. Well, it wasn’t my cozy library at home with its massive fireplace, but this shelter and several hundred more like, or not like, this one will be home for the next five or six months. “Home away from home…” “Home sweet home…” and a hundred more ole saws popped into my head.

I found a broom and swept the snow that had blow into the shelter and onto the sleeping platforms away. The snow outside (outside??? Was there a inside and outside to an AT shelter?) had all but stopped. The wind, I hoped, would die down as the afternoon faded into dark. My stove made me happy with hot chocolate. My sleeping bag made me even happier with the warmth that it conserved from my body heat. I grabbed my journal and a pen…it was time to waste ink, paper and kill the Queen’s English. I made a drawing of a shelter in the snow. The snow in the drawing…no problem, white journal paper. After much wasted effort, I arm-lengthen the drawing and studied it for a few minutes. It looked like something Picasso would have drew coming down from a really bad one room trip on LSD. I thought — later this spring when a search party found my freezer-dried body in my sleeping bag and looked at my journal, read my last thoughts and saw my last drawing, the rescuers would think, “This guy, no doubt was the product of a first cousin marriage since he comes from Kentucky. Or at the very least, he comes from a gene pool the depth of a coat of morning dew on grass.”

Voices!! People???! Thoughts of Tolkien and his description of the Shire popped into my head. There are too many people in my head! Did I make a wrong turn at Springer. Was I in the Shire? If these people coming through the woods are short, walking in the snow with hairy feet, I’m outta here!!!!! Nope…four normal people. RATS!!!! Yet another opportunity/excuse to leave the trail missed. Where was Frodo and Gandalf when I needed them? The hikers made themselves at home in the shelter and dropped gear all around and outside like leaves from a Gingo tree after the first killing frost.

People names flew and spaces on the sleeping platforms were claimed. Stoves roared! The day died with friendly conversation. Candles flickered. Snow began to fill up the woods outside the shelter once again. The sound of a creek wrapped me in a blanket of soft sound and sleep was not too far on the heels of the start of the creek’s symphony.