How it Took Me Over 40 Years to Start the AT

I’ve had this dream a long time, over 40 years in fact.  I first learned about the Appalachian Trail because I hadn’t learned enough in school.  During summer vacation between the third and fourth grades my parents gently broke the news to me that I’d be seeing a tutor to make up for some poor grades.  I was surprised, not that I had poor grades, but that I had any grades at all.  No one explained the whole “you are graded” concept to me.  I thought it was just a place to hang out and hear stories, draw pictures, and play games involving letters and numbers.  What does this have to do with the AT?  One day my tutor had me read an article about the Appalachian Trail and an idea formed that never really left my mind.  I’d really like to find that article today.  I think it was a National Geographic World Magazine (for kids) circa 1977.  So, this is a nearly lifelong dream; call that reason number one.

Life Happens, in a Good Way

I never forgot about the AT but I did develop other loves and interests.  The common thread was that nearly everything I gravitated to was an outdoor activity.  Duluth, Minn., is an outdoor playground along the shore of Lake Superior.  I hiked, camped, canoed, skied, fished, and biked my way through life but one interest began to dominate: aviation.   I became inspired, or obsessed, by anything that flew and with the help of a few key mentors I focused my life toward the goal of flying.  That meant getting a college degree, so I could become an officer, so in turn become a pilot, and live what I hoped would be an exciting and challenging life.  Somehow that all happened and I completed Air Force pilot training, and made a career.  Along the way I married Brenda, the girl of my dreams, and we raised two boys into young men.  We were an active outdoor family, always traveled and camped, including some epic backpacking and hiking in the Sierra, Yosemite NP, Rocky Mountain NP, Grand Canyon NP, the Smokies, and Big Bend NP.  There wasn’t any time to thru-hike during these years but it was always in the back of my mind that I would when I retired. By 2010 I was on my last assignment in Pensacola Fla., and began to make plans.  Reason two: I’m at transition in life.

Life Happens, in a Bad Way

On Easter morning in 2011 Brenda woke me up to these words, “I have a lump.”  Tests led to a diagnosis, and the diagnosis led to treatments.  She completed multiple surgeries, chemotherapy, and radiation.  For a brief period in 2013 we thought we were in the clear. I did retire but remained in the same job, flying for the Air Force, but as a civilian pilot now.  We took a trip to northern Georgia and visited Amicalola Falls SP and Springer.  While there we took these pictures, and sitting on the rock designating the Southern Terminus of the AT I wrote:

“I’m only here for a visit but someday I’ll be back to start a long adventure.” 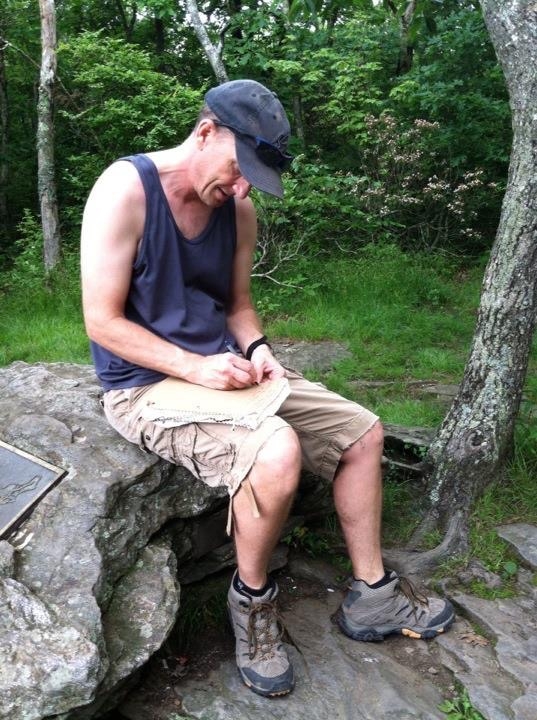 It seemed so close.  We had beaten cancer.  Brenda was behind me 100 percent to thru-hike the following year.  It was a return to happy times and optimism.  Just a few weeks later we found out her cancer had returned and spread.  Four years later she was gone.  Her fight was heroic and she never gave up.  I don’t want to relive it here but we were very open about the experience and together documented it on our CaringBridge site.  If you want to learn about a strong woman facing an impossible situation with incredible bravery and grace you can do that here. 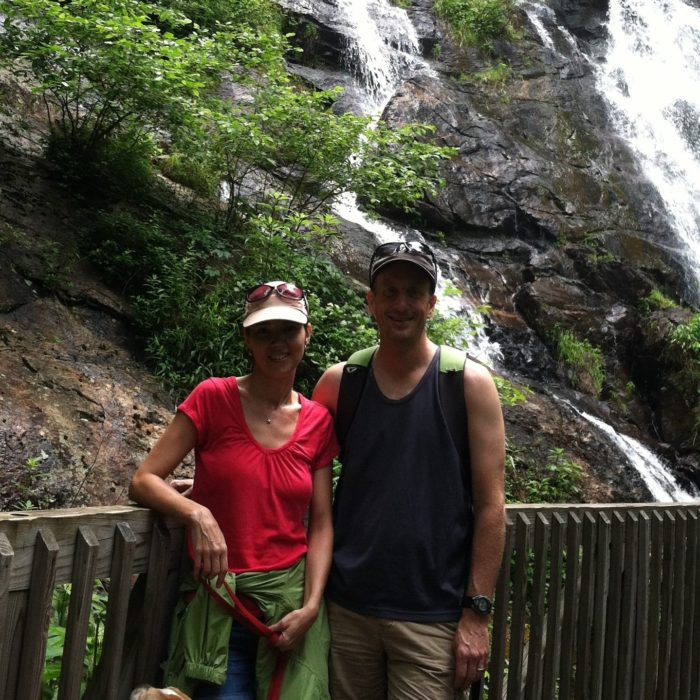 Brenda and me at Amicalola Falls SP.

Devastated, but Life Must Go On

Big dreams die hard.  Brenda died six months ago to the day I’m typing this.  Since then I’ve downsized and moved back home to Duluth to be closer to our sons, family, and the place I truly love.  We talked about this, what I would do “after” many times over the years.  I’m not over it, I’m not just moving on.  There hasn’t been a day I don’t think about her.  But while it is getting easier I still have a long way to go.  I need a break from the intensive caregiving she required, and I was honored to provide, over the past extremely difficult years.  I need to heal and reflect.  I need to find out what is next for me.  I’ve walked an average of five miles a day every day since she passed.  When I’m outside and moving I feel the most normal.  That’s reason number three. I need time and space to heal, reflect, and hope.

I have many other reasons, goals, and expectations for my hike but these three are the foundation.  Fulfill a lifelong dream, mark a transition, and reflect on the past while contemplating the future.  The others will reveal themselves over time.  Thank you for reading and I sincerely invite you to follow along.