(Updated March 14, 2020) A $1 billion power transmission line through western Maine received a big boost on Friday, March 13, when the Maine Department of Environmental Protection issued a draft permit for the project.

The draft permit puts limits on the project, including narrowing the 150-foot width of the corridor that would cut through the woods of western Maine, according to Maine Public Radio.  The corridor would be limited to 54 feet.

Public comments on the power line will be taken until March 27. After that, DEP Commissioner Jerry Reid will decide whether to finalize the permit.

The National Resources Council of Maine posted on its website the following statement by the council, the Appalachian Mountain Club, and Trout Unlimited:

“Based on our initial review, the CMP corridor continues to carve an unacceptable path through a globally significant forested landscape and provides no verifiable reduction in greenhouse gas pollution. While we appreciate the Department’s attempt to reduce impacts, this remains the wrong project in the wrong place.”

Thorn Dickinson, the president and CEO of New England Clean Energy Connect Transmission, a limited liability company set up to back the corridor expansion, praised the DEP’s action, according to the Portland, Maine, Press Herald newspaper.

“The (DEP) commissioner and staff have reviewed thousands of pages of documents and testimony and determined that, with the draft special conditions, the project fully complies with all environmental standards established by the DEP,” Dickinson told the Press Herald. “We will review the special conditions included in the draft permit and look forward to the final decision by the DEP to approve the NECEC.”

The 145-mile high-voltage line from the Canadian border to Lewiston, Maine, crosses the Appalachian Trail between Caratunk and Moxie Bald Mountain, linking up with the New England power grid in Lewiston. The power is destined for Massachusetts, which is paying an estimated $950 million for the transmission line to bring hydropower from dams in Canada in an effort to boost its renewable energy footprint.

The project received a boost from state regulators in January when the Maine Land Use Planning Commission said, in a 5-2 vote on Jan. 8, 2020, that Central Maine Power’s New England Clean Energy Connect project was an accepted use in the areas it would be built, according to the Portland Press Herald and CMP. The commission paid attention to protected recreation areas around the Kennebec Gorge and Appalachian Trail, and the power company’s proposals to buffer the impact of its power line on them, the newspaper said.

The commission is the planning and zoning authority for the more than 10 million acres of unorganized areas of Maine.

At a public hearing in Lewiston on December 5, 2019, foes of the transmission line said it would damage Maine’s North Woods, a recreation hub for anglers, hikers, hunters, snowmobilers, and water sports enthusiasts. The woods are prime wildlife habitat.

Opponents have also called on the Army Corps to conduct a full-scale environmental review of the transmission line project, as it did for the similar Northern Pass proposal in New Hampshire that eventually was rejected by the state.

The US Environmental Protection Agency told the Army Corps in May 2019 that it had major concerns with the transmission line review, and questioned whether CMP fully considered less-damaging alternatives.

“The proposed route will slice through a globally significant forest,” said Susan Arnold, the Appalachian Mountain Club’s vice president for conservation in Maine’s western region. “This kind of infrastructure fragmenting the forest can have a lot of implications for the health of the forest, climate change, wildlife, and more.”

The AMC points to the New England Clean Power Link, a 150-mile transmission line through Vermont that will be completely buried underground, as an example to follow. The line has received all the necessary permits and will carry Canadian hydropower from the Canadian border to Ludlow, Vermont.

In response to suggestions that CMP bury all or part of the transmission line, the utility said it would increase the cost from $950 million to $1.6 billion.

The CMP high-voltage power line is opposed by more than 20 Maine towns that it passes through. And 65 percent of Maine residents oppose the transmission line, with 15 percent supporting it, according to a poll conducted by Critical Insights, a research company based in Portland, Maine. 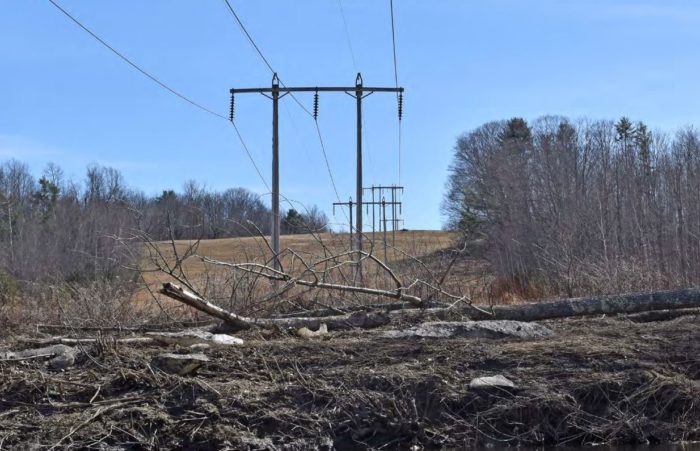 The existing transmission line corridor crossing the Sandy River in Farmington, above; a photo simulation of the proposed expansion and new single-pole towers, below. Photo and photo simulation via 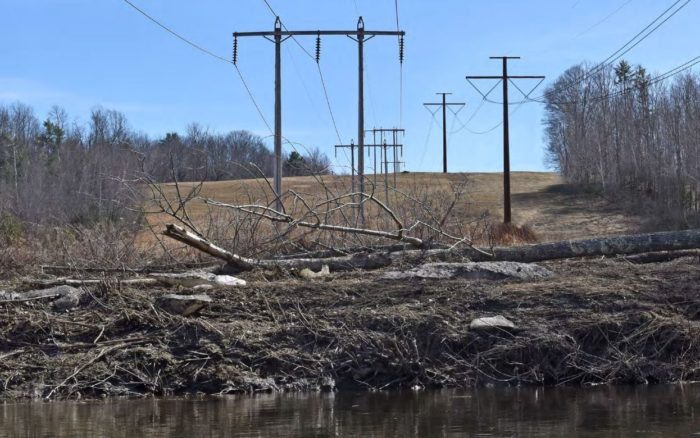 The energy project brings together CMP and Hydro-Quebec, Canada’s huge hydropower utility. CMP anticipated having all its permits in place around the end of 2019, with completion expected in late 2022.

The new 53-mile path would be cut from Beattie Township on the Canadian border to The Forks on the Kennebec River. An existing 92-mile corridor from The Forks to Lewiston would be expanded.

CMP says 850 single-pole towers at an average height of 80 feet, with some rising more than 100 feet, would be erected in the power corridor. They would be in addition to existing towers in the corridor running from The Forks to Lewiston.

The AT crosses the current transmission corridor three times as it follows the lowland between Pleasant Pond Mountain and Moxie Bald Mountain east of Caratunk.

The AMC says the expanded corridor with taller towers would be visible from those two high points.

CMP’s parent, Avangrid, has suggested eliminating two of the AT crossing, but no agreement has been reached.

The AMC says Avangrid should work with local AT managers on any relocation.

In one concession to the outdoor recreation industry in Maine, CMP has agreed to build a tunnel under the Kennebec River Gorge instead of running transmission lines above the gorge. The gorge is a prime whitewater rafting destination and a major economic driver for surrounding towns.

The Natural Resources Council of Maine contends that sending power from Canada’s dams to Massachusetts would not benefit the environment because it would divert energy from existing markets in Ontario and New York.

But other groups, such as the Conservation Law Foundation, say Hydro-Quebec would create new hydropower that would be sent to Massachusetts and that would help reduce carbon emissions.

CMP said that in conjunction with Hydro-Quebec it would provide more than $200 million in economic benefits to Maine residents, including $50 million to help low-income Mainers reduce their energy costs and $140 million to reduce rates for all Maine electricity consumers, for 40 years.

In contrast, the Outdoor Industry Association study estimated that the outdoor recreation economy in Maine generates 76,000 direct jobs, $8.2 billion in consumer spending, $2.2 billion in wages and salaries, and $548 million in state and local tax revenue.

Massachusetts turned to Maine for a transmission line path from Canada after the Northern Pass power line, which would have traveled through the White Mountains from Canada to Massachusetts, was rejected by New Hampshire.