Quiet Days with a Noisy Mind

Every once and a while I cross a slice of forest or field that arrests me. My thoughts are silenced by its radiant serenity, and I am tempted to wallow like a lotus eater. Day 46 crossed one such pasture: this sudden, grassy, luscious grove where everything was soft. I grinned and continued walking.

That was the highlight of a quiet 15 mile day, after which I camped by a stream with a women named Birk (for Birkenstock) and I failed at starting a fire for over an hour.

The next day held a stop in the town of Marion. I arrived at the Mt Rogers Visitors Center to get the shuttle into town, walked inside, and was taken aback—I’d been here before! SeveraI years ago when I volunteered on an AT trail crew our van had stopped here (at the attached ranger station) to pick up water and fuel. I had no idea the place crossed the AT at the time, and had nearly lost it in the annals of memory, so to find I had walked here was a pleasant surprise and a tad oneiric.

I shuttled into Marion and sat next to the most voluminous-bearded hiker I’d yet seen, and was honored to learn that he’d been hoping to meet me, having heard from someone that some guy named Beowulf had the best trail-beard next to his. Though I take pride in my beard, I don’t think that’s even slightly true, and Forest’s beard was at another level entirely.

In town I hit Walmart where I ran into 5 and a hiker named Cookie Monster. We then hurried to Pizza Hut to catch the last hour of the lunchtime buffet.

I spent the night at Chatfield Shelter and left a poem:

She sung the slippery lace of moon
and drew the lustrous string of sun
between, betwixt, through all she wove
until one sky was another
and another day was undone.

The next day happened upon some of the best trail magic in weeks. Out of an old schoolhouse built in 1884 Rick and Carol Lindamood were handing out snacks and supplies donated from their church. They had all kinds of stuff: shampoo packets, mini deet spray, floss, handknit hats, postcards and pens. It turns out Rick’s great grandfather was the one who built and taught in this very schoolhouse. 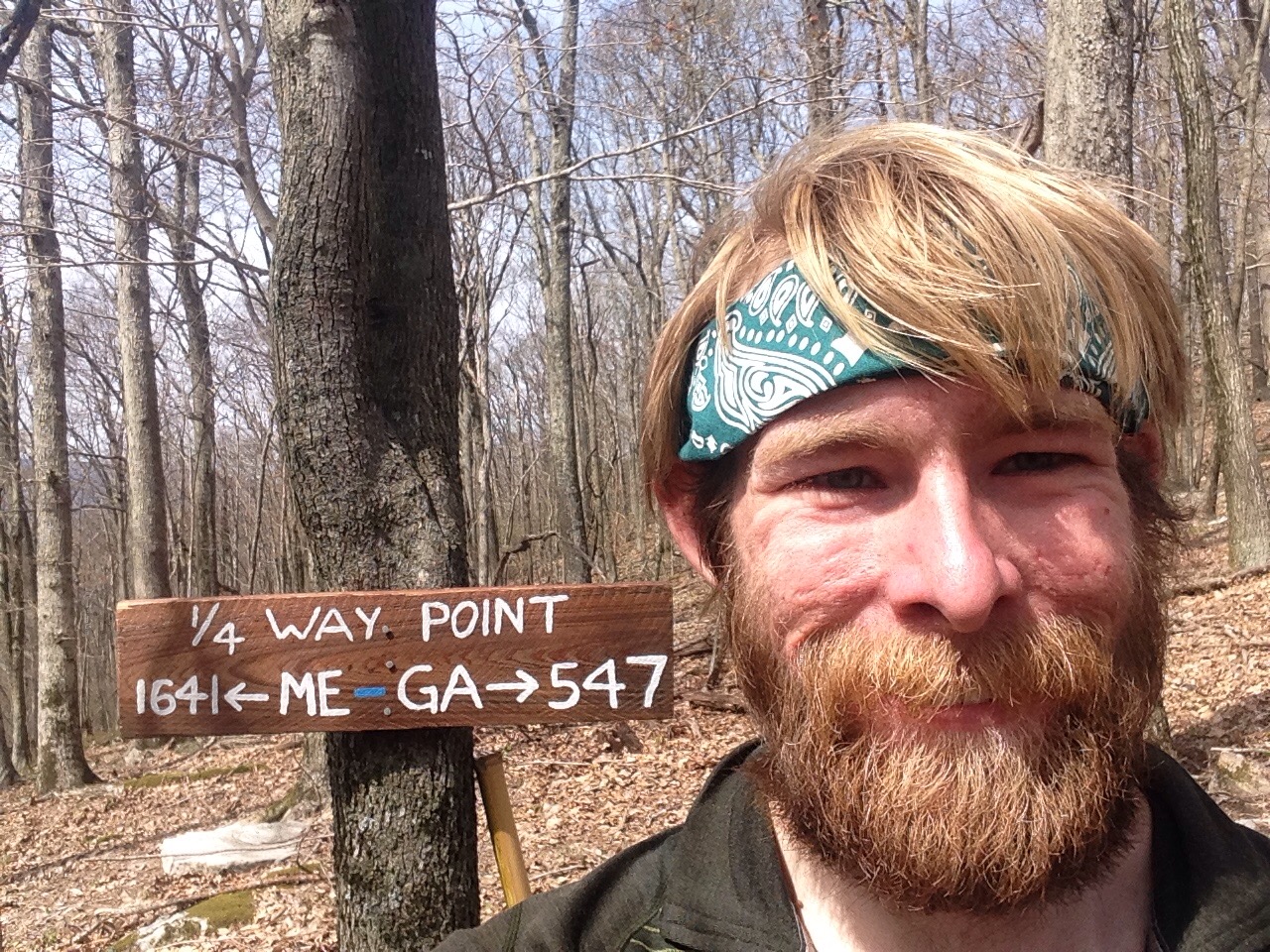 After Kyle got off, the majority of my thoughts while hiking have revolved around my future and what I want to pursue after the trail. At this point I was swirling with clinical psychology, having just read Viktor Frankl’s Man’s Search for Meaning and pondering my own obsession with meaning, value, belief, and semiotics. I spent a lot of time weighing what it would take to pursue a career in counseling against the time I would like to invest in my creative writing. For a time I was certain psychology was the path but I’ve since swung back around to focusing on writing. I must have spent over a hundred hours by now driving myself mad with these questions, and I’ve begun to wonder if I’m doing myself much good by confronting them. By now my mind’s run out of new topics to sort through while walking. All my mulling’s become dwelling.