I went to sleep last night with swarms of mosquitoes outside the bug net of my hammock. I heard high pitched whining in my ears as I went to sleep. When I woke this morning, there were still some on my net, but not as many as last night. I didn’t feel like oatmeal for breakfast, so I made half of a mac and cheese instead. We liberally applied bug spray and went down the trail.

We went up a short climb, and tried to find cell service on top without much luck. Rash got a few texts out. On the way down, I got a bar of LTE and texted the hostel asking to reserve bunks. A few girls from the yoga group passed me. I stopped for water at a spring with one of the girls, Sherpa. 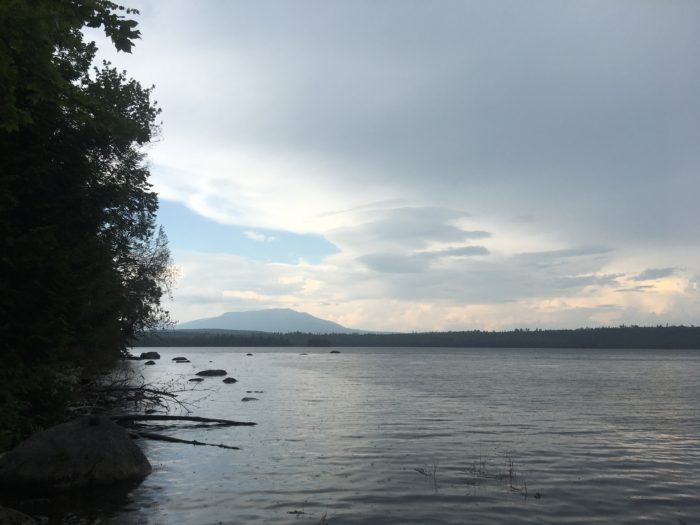 I met them at a shelter with a huge waterfall in front. We hiked on, and came to a road with some of the yoga girls from the shelter last night. I stopped and drank a small purple Gatorade from a cooler of trail magic, and had a mini Twix. The Gatorade was amazing and hit the spot.

We hiked on so we could get to White House Landing before dark. The trail was wonderfully flat and we were cruising. My quads were burning from hiking so fast, since I’m used to being slowed down by climbs. We made it to the turnoff which was a beautiful side trail lined with thick pine forest. There was a walky talky to call the boat, but I used my cell instead. 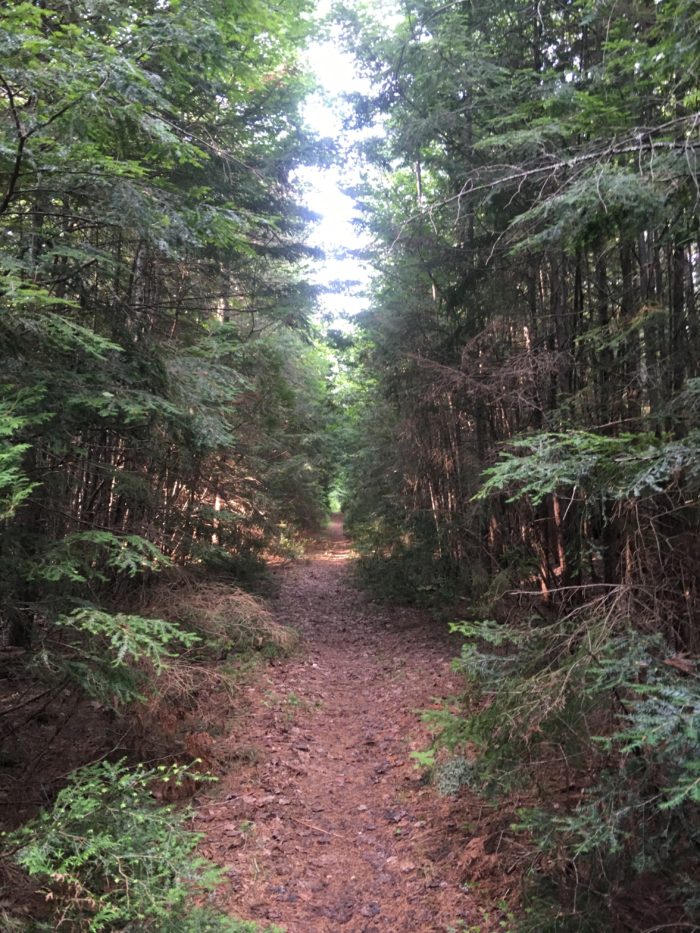 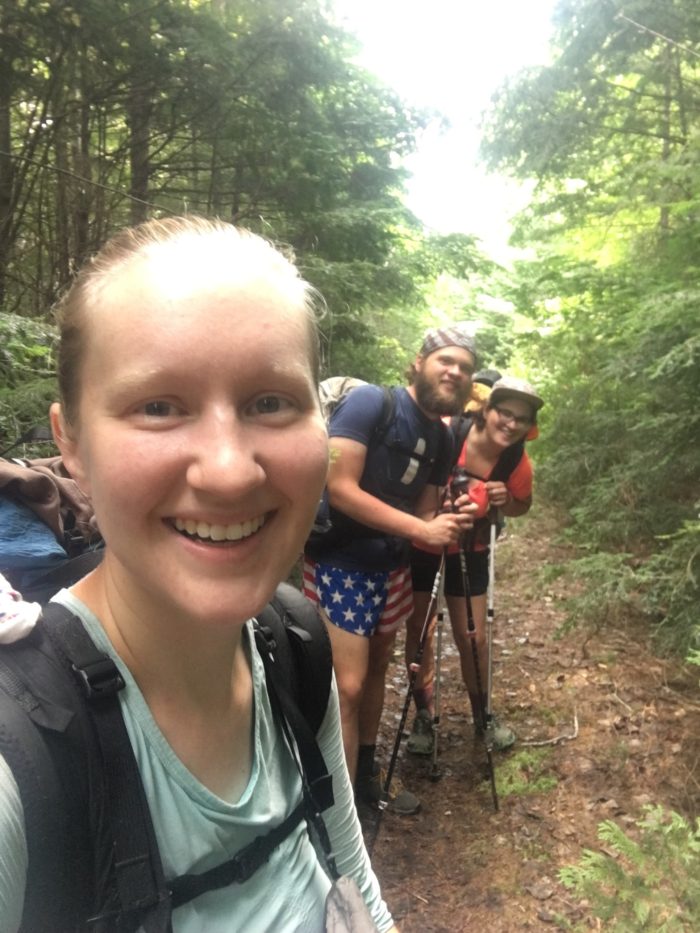 Excited for the prospect of a shower and food 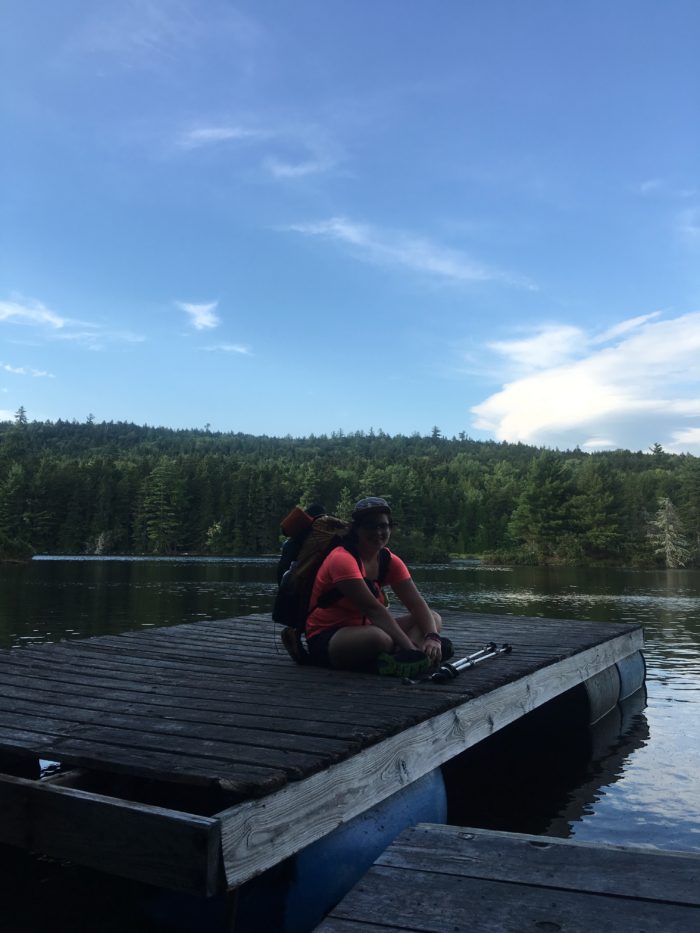 Piñata on the dock getting munched on by mosquitoes

The mosquitoes on the dock waiting for the boat were vicious. The air was thick with them buzzing around us and our packs. The boat showed up, and we enjoyed the speedy ride to the hostel. The lake was beautiful and clear. It was peppered with shallow areas, some right in the middle of the lake. 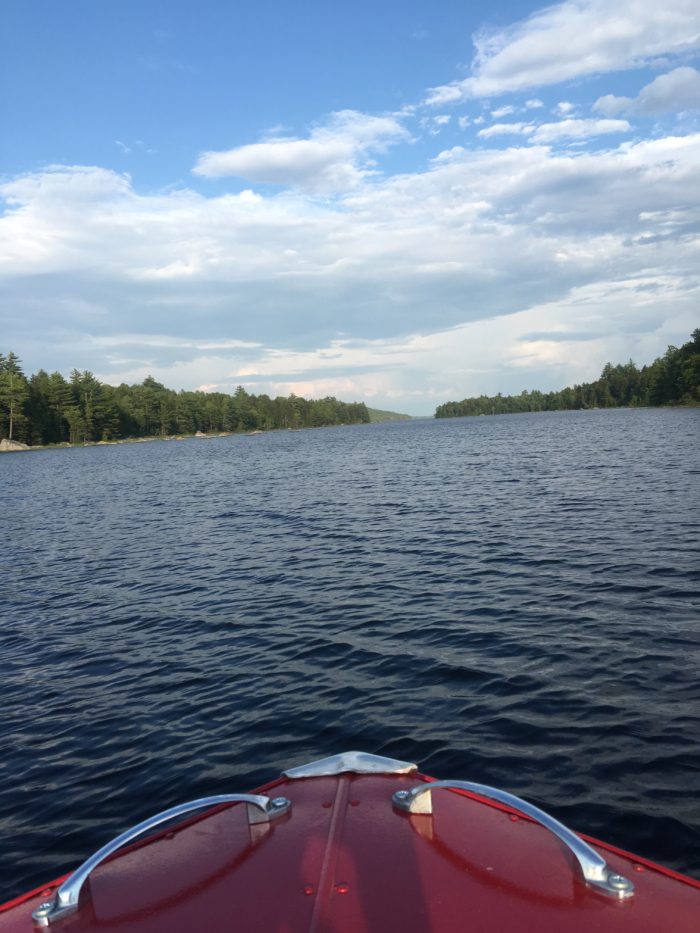 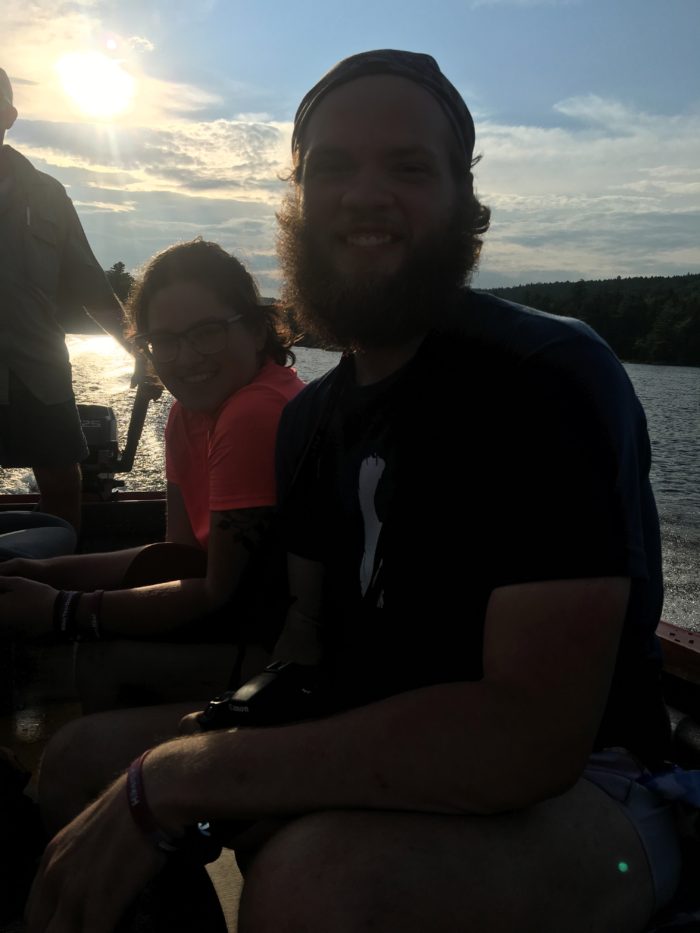 We got to the hostel and relaxed with homemade pizza Flicker and Gandolf were kind enough to share. It was $5 to charge any devices, so we decided to just use our battery packs instead. We showered in the indoor solar powered shower. The hostel is completely off the grid, so everything is solar or battery powered. It was a cool experience, and one of my favorite hostels on the trail. We got settled in the bunk house which was dark. We tried to see a moose but had no luck, even though the lakeside house seemed like perfect conditions for a moose sighting. 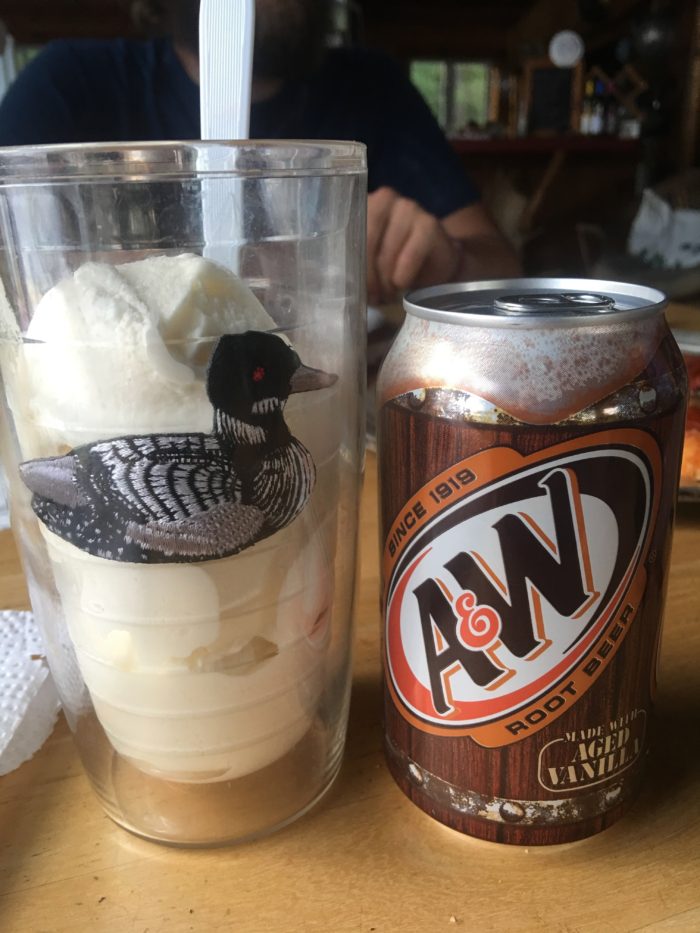 We packed up and got to breakfast with Sauce, Snooze, Keller, Flicker, Gandolf, 2 SOBOs, and a guy from the Netherlands. We had crispy bacon, eggs, a buttered English muffin, and orange juice. While we were eating, the blueberry pancakes were being made. One of the SOBOs didn’t know it was AYCE, so he took one of Sauce’s pancakes. We paid and made out way outside to sit in the sun and wait for the boat to take us back to the trail. 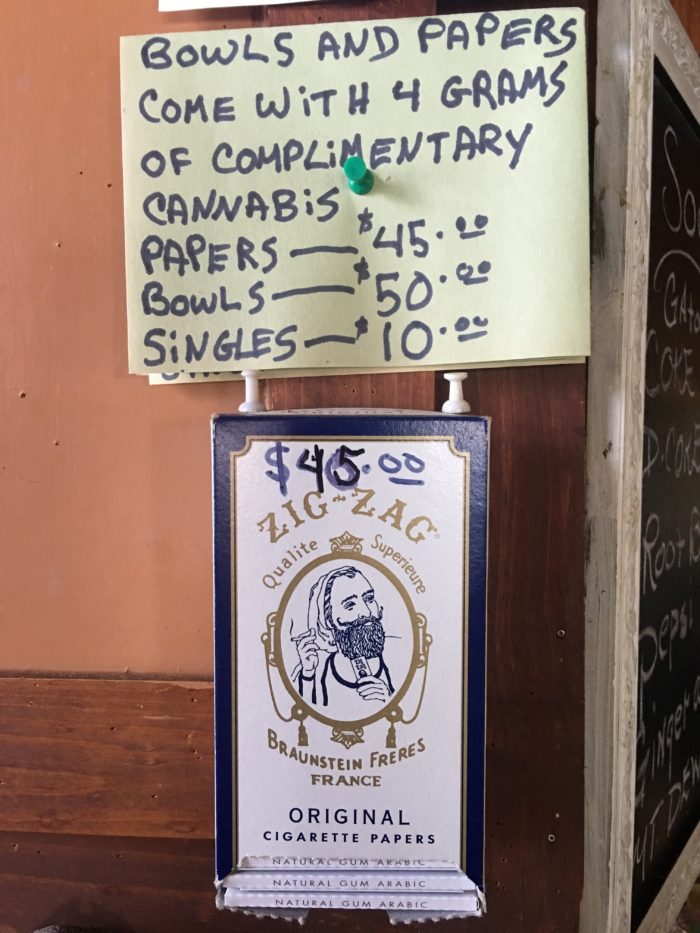 “Complimentary” cannabis with purchase. Grown themselves in their garden. This is my first time seeing it legally for sale. 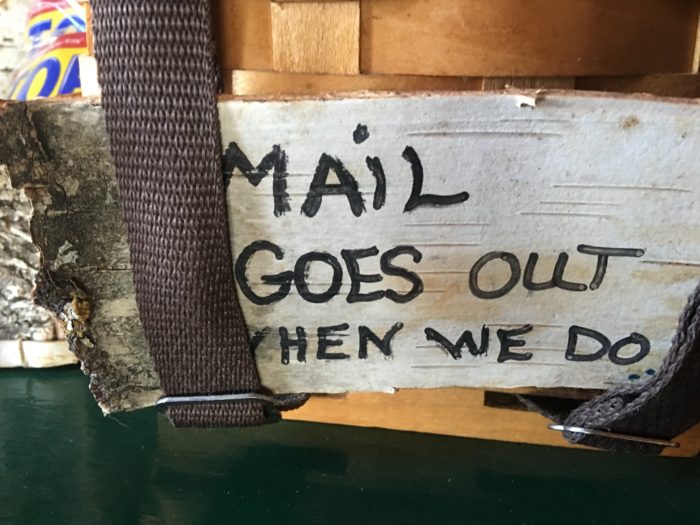 I enjoyed the boat ride back. I put on suntan lotion but held off putting on Deet since the little buggers weren’t out yet. We got on trail, and a few miles in, I stopped at a rocky beach. I was soon joined by Frog, Mazyie, Sauce, Snooze, and Keller. I took my shoes and socks off to dip my feet in, but the rocks hurt my feet and reminded me of fording rivers. 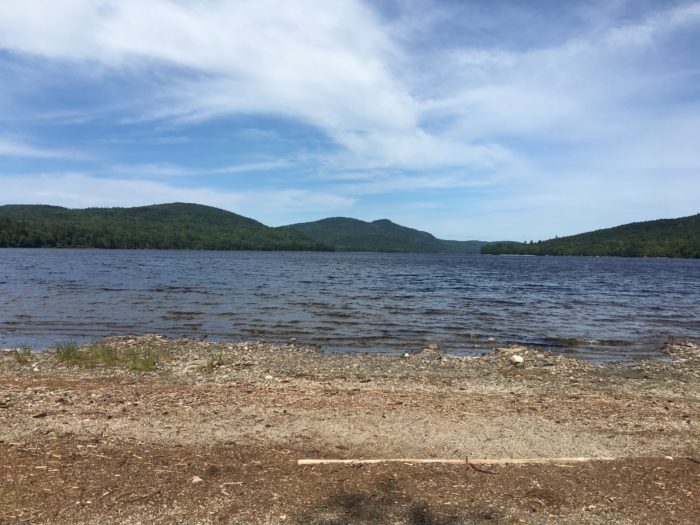 Another beach that was sandy instead of rocky

I took the trail slow and was careful to avoid stepping directly on roots and rocks. My foot hurting yesterday made me nervous about getting an injury this close to the end. I stopped at the shelter and found a man from the Czech Republic. I went to use the brand new privy that was a bit of a walk, and found Flicker with a man with a grey beard. Frog and Mayzie came to the shelter after I returned and was filtering water. I talked to Mayzie about her work as a nurse midwife, but I could have stayed there all day talking to her. 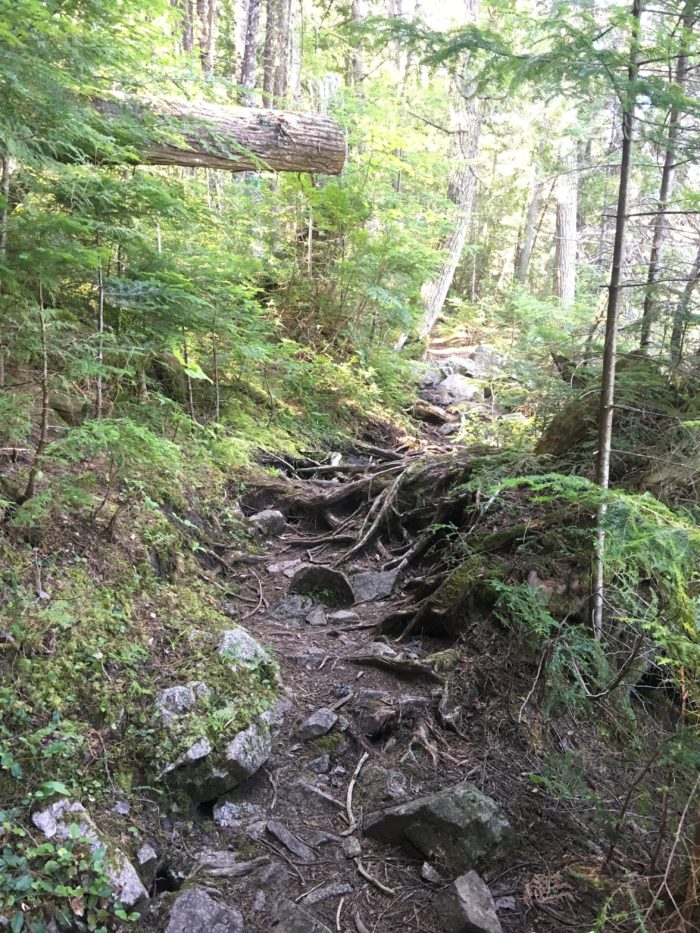 Roots and rocks of the HMW

We pushed on up the relatively long climb of the day. I was sweating buckets. When I thought I was at the top, I checked Guthooks and was only halfway. When I finally made it to the top, I found Sauce, Snooze, and Keller sitting on the rock of the view of Katahdin. Snooze was sitting in his chair. 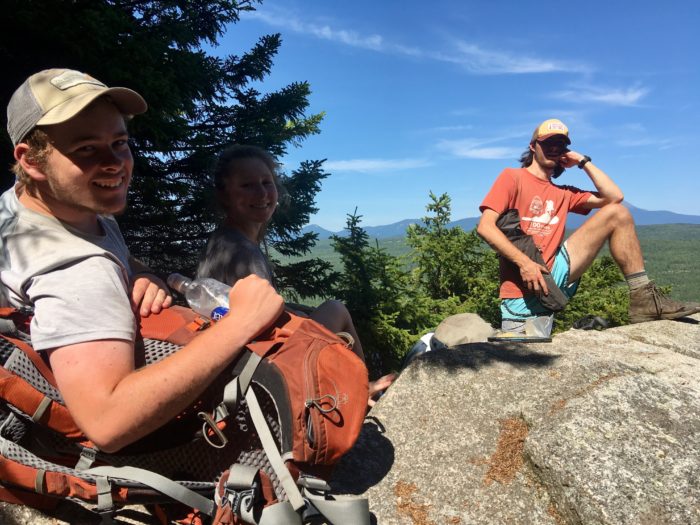 Sauce, Snooze, and Keller. Snooze is leaning on Katahdin.

They left, and I talked with Frog and Mayzie about Baxter State park and the logistics of getting into the park. I had service and texted Louis. On the way down, I ran into Sauce, Snooze, and Keller getting water, and we hiked along a pretty waterfall to the shelter. We found Rash, Piñata, Flicker, and some other hikers at the shelter. I got water and we discussed logistics of summit day. Sauce, Snooze, Keller, Rash, Piñata, and I left. Sauce told me the Harry Potter trail analogy she heard from a SOBO (nonhikers are muggles, day hikers are squibs, and section hikers are mudbloods).

Sauce, Snooze, and Keller decided to camp at Rainbow Dam instead of pushing the 2 miles to the campsite since they’re not summitting until Friday. We hiked the 2 miles quickly, and set up camp, trying not to get eaten alive by mosquitoes. The water was a piped spring, crystal clear and delicious. I made chow mein but was still hungry so I went through my snack bag, sitting in my hammock for protection against the mosquitoes.

I was up throughout the night, listening to something pitter patter through the woods around our campsite. It didn’t sound big, but it came very close to my hammock. I shined my light out when it came by, trying to see what it was, but all I saw was the leaves of the brush rustling. At one point, it walked through our camp and knocked Rash’s water bottle over. Rash and I shining our lights around weren’t quick enough for whatever this was, and we never got a look at the intruder.

We ate breakfast, and Ricola left for the trail. I got water at the piped spring by the pond and we were all amazed how good the water tasted. I walked up the hill to use the privy and realized this was one of the last times on my hike I’d be using a privy. We packed up and left. I hiked with Rash and Piñata for a while, then hung back to hike on my own.

I walked around a beautiful lake with crystal clear water, and I stopped to sit on a rock and watch the small fish swim around the shallows. I took my tracker out to text Louis, and it fell in the water with a loud plop. I fished it out and dried it off. I watched a seaplane fly overhead, then packed up and headed back on the trail. 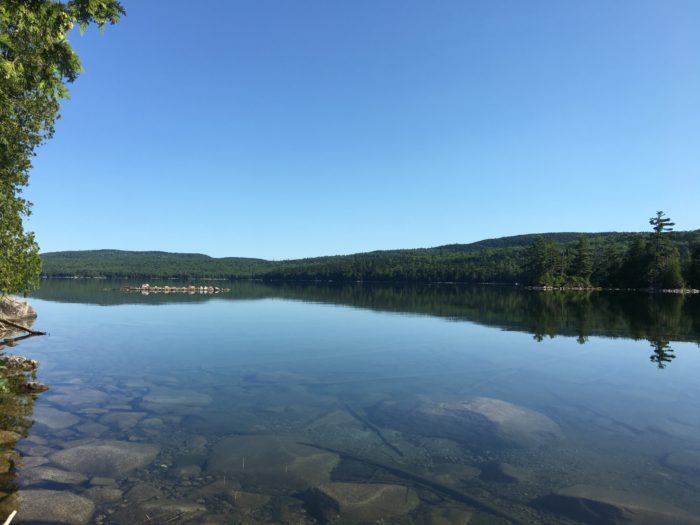 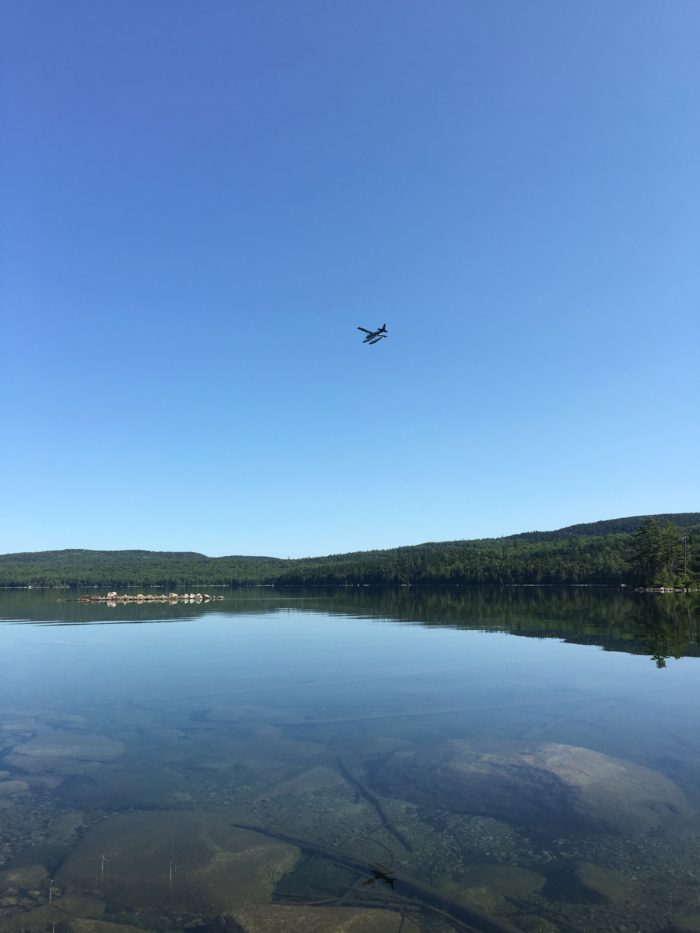 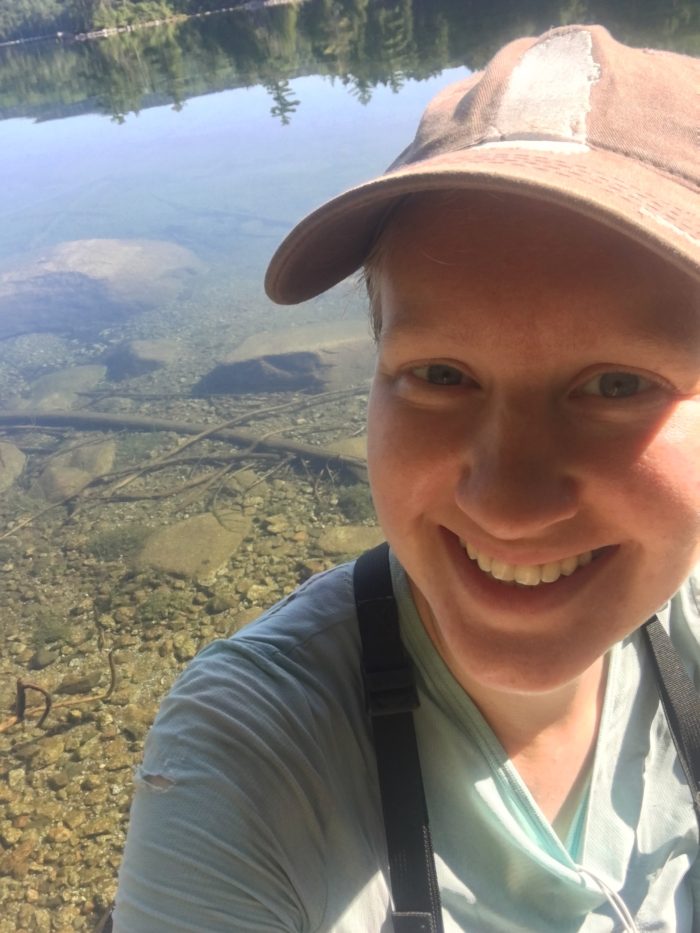 Where my tracker fell in

I hiked along, and came to a flat open rock with more blueberry bushes. The sign said it was Rainbow Ledges. I took a few minutes to enjoy the view and eat some blueberries. I couldn’t believe the sign that said we were only 21 miles away. 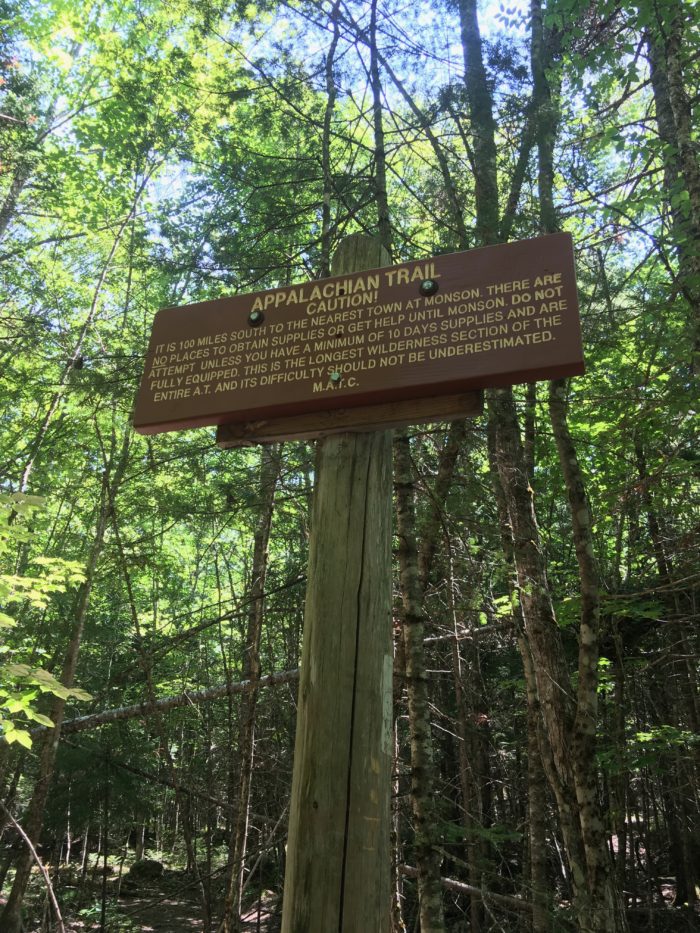 The other end of the HMW 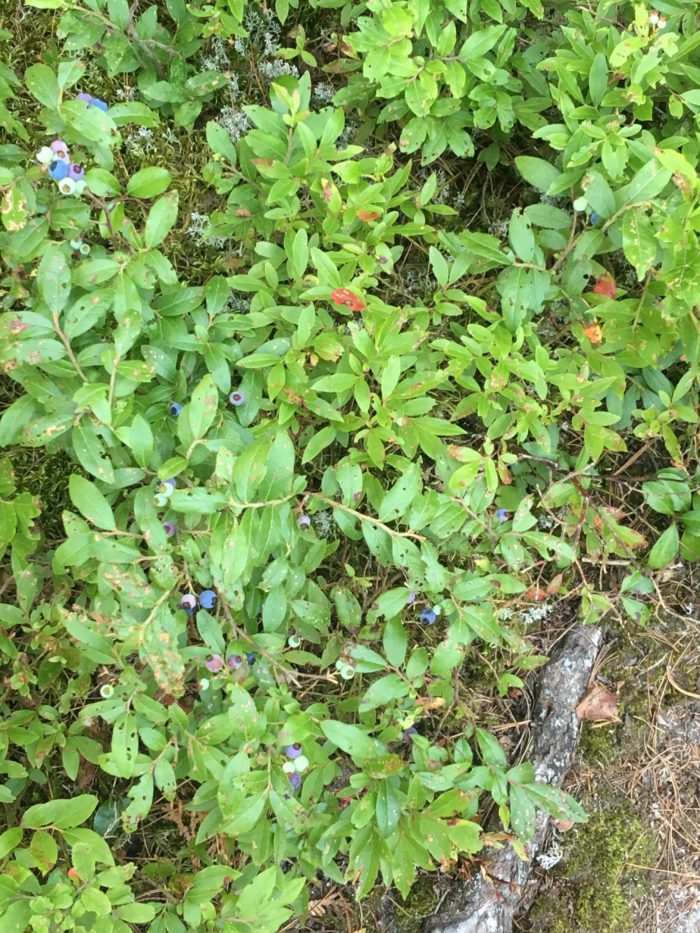 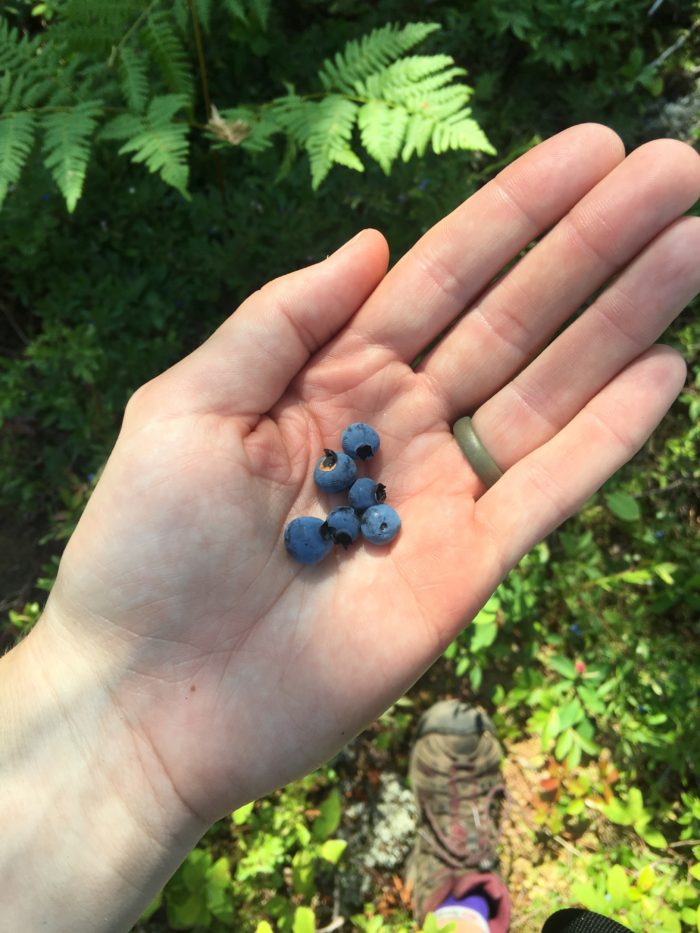 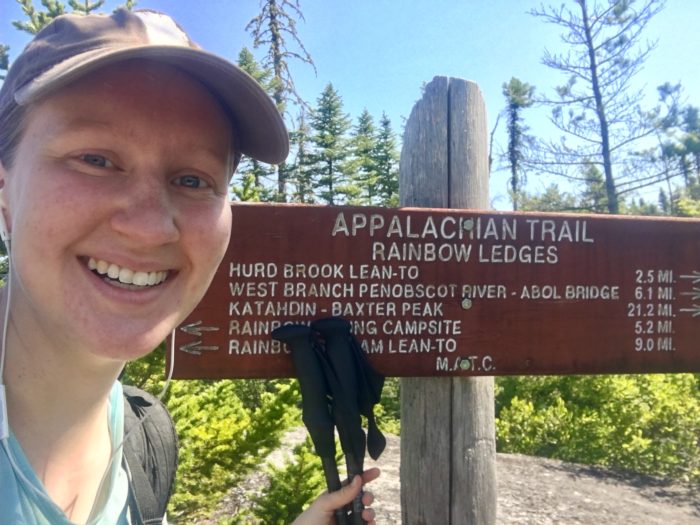 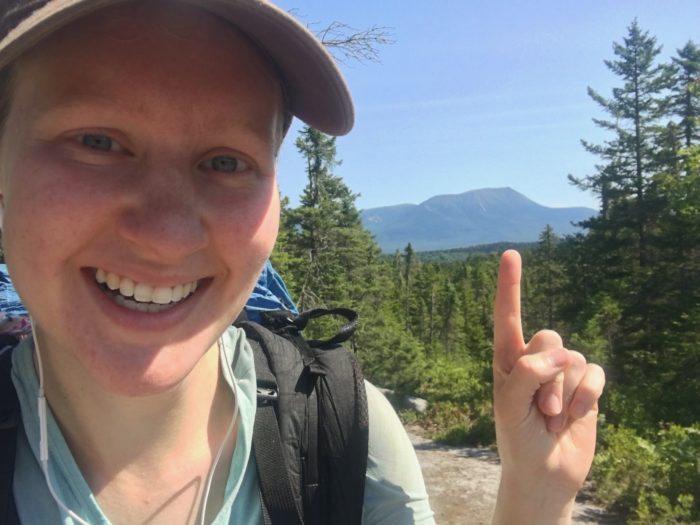 We came to a road and found Gandolf waiting for Flicker. We tried convincing him to have her summit with us tomorrow, but he said she wanted to take it slow and rest. We walked along the large dirt road for a while, and came across a woman under an umbrella with a clipboard. She was doing a survey of hikers, and I stopped to fill out her paper. A little ways down, we stopped to get a beautiful snapshot of Mount Katahdin. 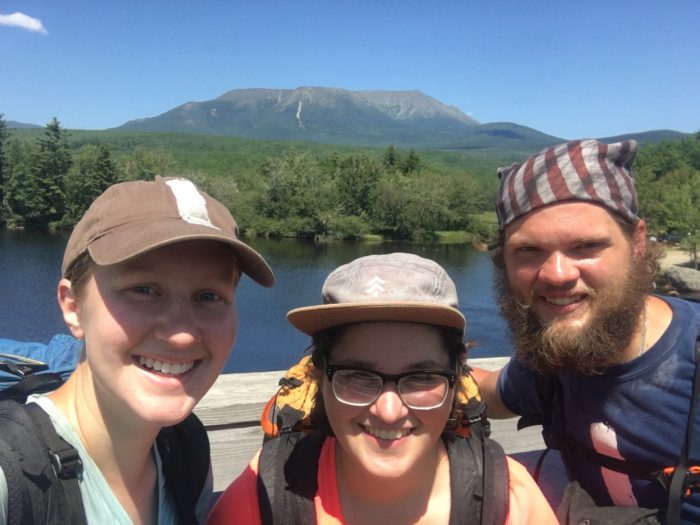 We walked down the road a little ways to a convenience store that sold ice-cream. It had RVs and campers parked outside. We found Flip, Keller, Snooze, and Sauce. We all got ice-cream and I had a great time laughing with the group. We said goodbye since Snooze and Sauce were planning on waiting a few days to summit with their dad. 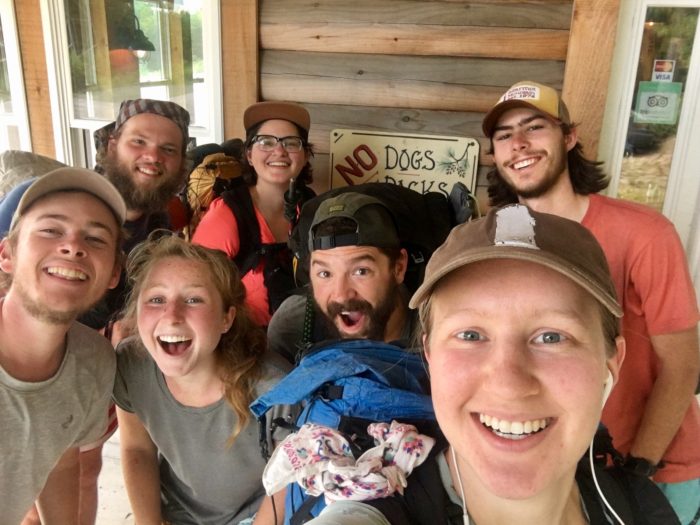 I loved hanging out with these cool cats 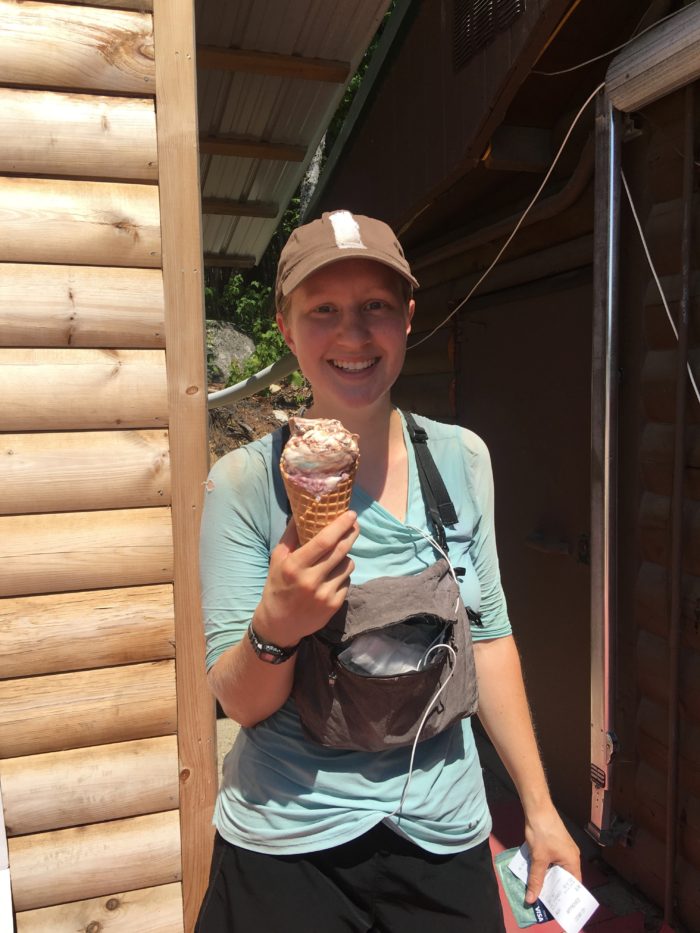 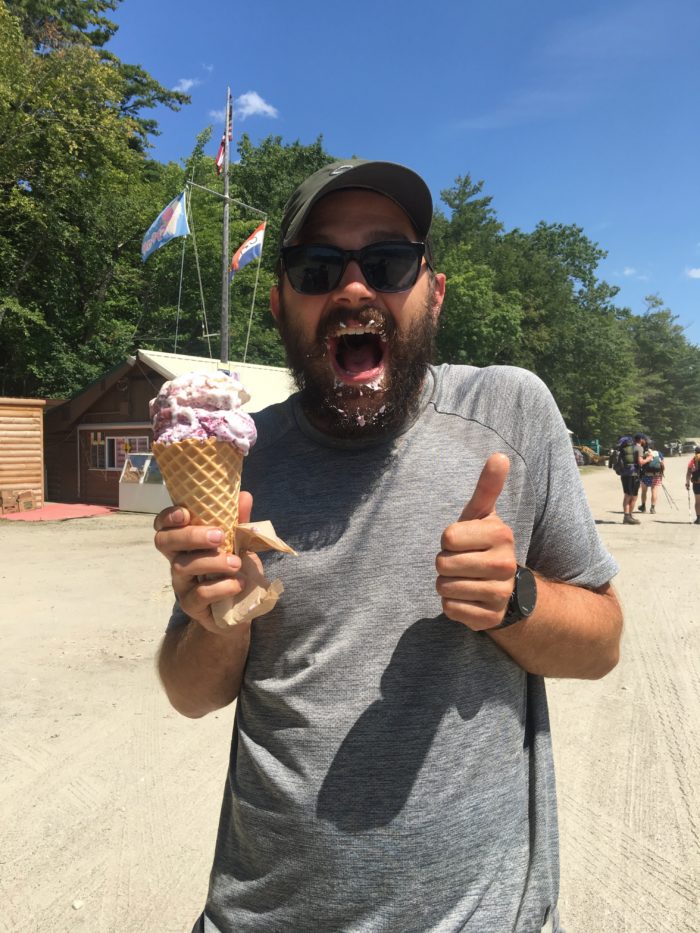 We finished our ice cream, and I started on the last stretch towards Katahdin Stream campground. Around every corner I’d hold my breath thinking I was going to run into the campground. I was so excited to see Louis. Finally after a lot of false alarms, I came to the campground sign. I found some friends hanging out on the picnic benches near the forest ranger hut, and went inside to get a permit. I found old Katahdin logs and found Jason’s log from 2016. 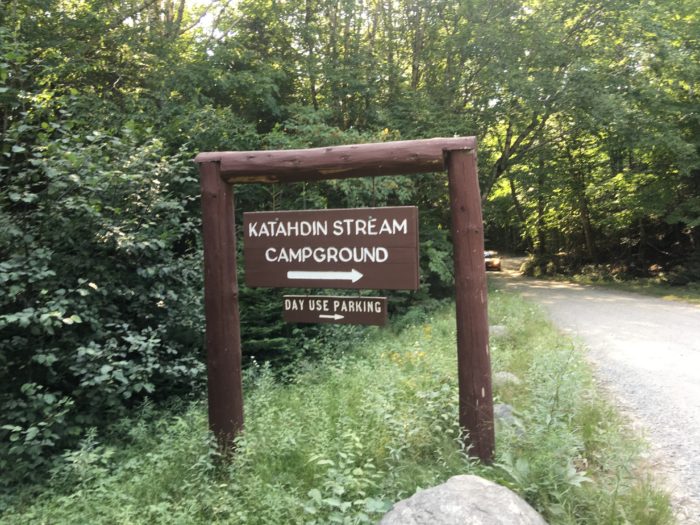 Halfway through the woman giving me my permit, I saw Louis walking in from the parking lot. I immediately got up to go hug him, then realized that was rude to the park ranger who was helping me. I brought him inside and got him signed in as well. We went back to the bed and breakfast, and I took a very long hot shower. We went out for dinner, and I ordered fried pickles which I had been craving. Back at the bed and breakfast, I had trouble falling asleep, and tossed and turned for a while before finally dozing off. 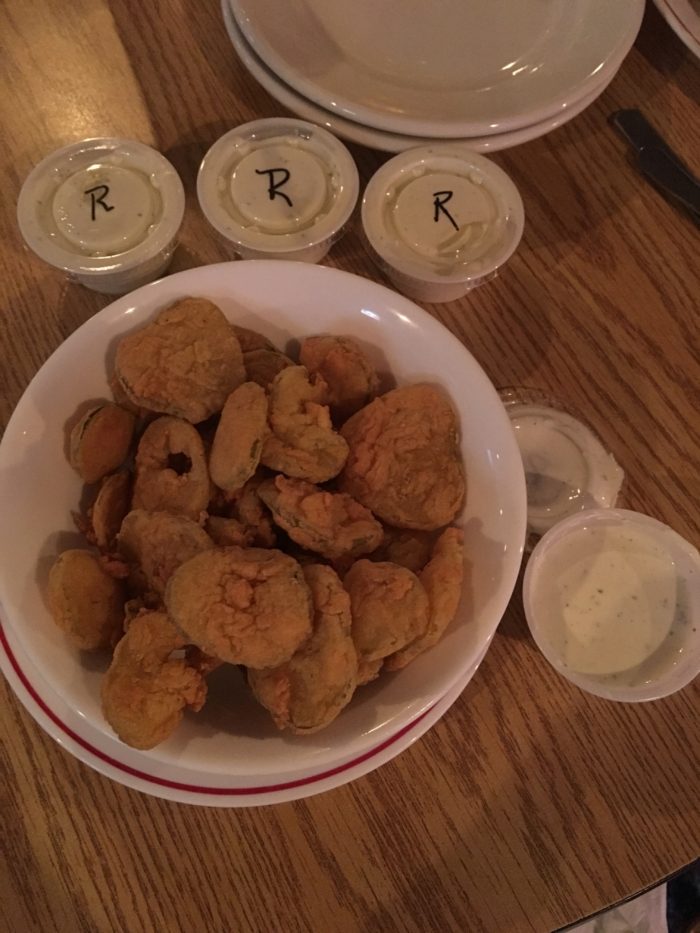 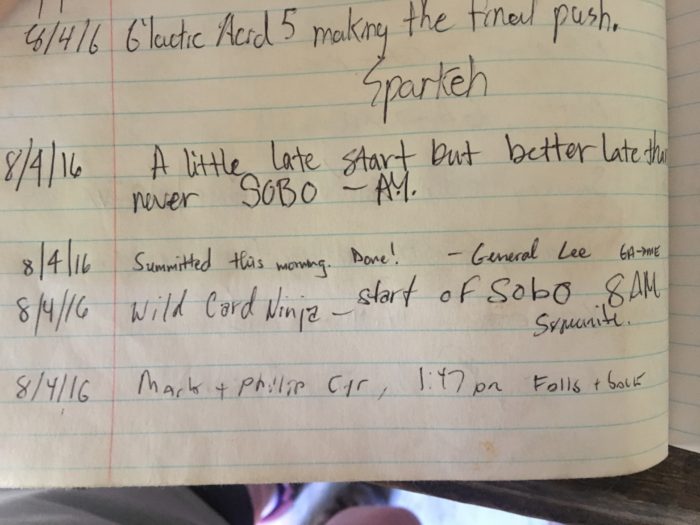