I woke up early and got our clothes out of the dryer. I went back to sleep, half expecting to sleep late and miss Jason going to work. I woke back up before 7, packed up, and went downstairs. Pinata was also packing up but still looked like she didn’t feel well. Rash was sorting his food downstairs. I ate an apple on the couch with Dean and watched the news, which I forgot how much I hated. Being removed from politics for this long has made me want to never leave the woods.

When we were all packed up, we said our goodbyes and profuse thank yous to Carol and Dean. Jason drove us out to the trailhead on his way to work. The difference today is the river is much higher, and one of the dirt roads was covered in a foot of water. It was raining and cold, and Jason reiterated what Carol said about calling one of them if we wanted to stay the night again tonight. We thanked him and started our cold and wet hike up to Dragon’s Tooth.

A few switch backs in, Pinata had to stop for a snack. We all needed water so we stopped early on to fill up. The climb up to Dragon’s Tooth was a little rocky and steep, but not terrible. There was a small stream flowing down in the middle of the trail. We came to the blue blazed trail to see the actual rock and took a rainy, foggy picture to celebrate going 700 miles. It was freezing standing still so we didn’t stay long. 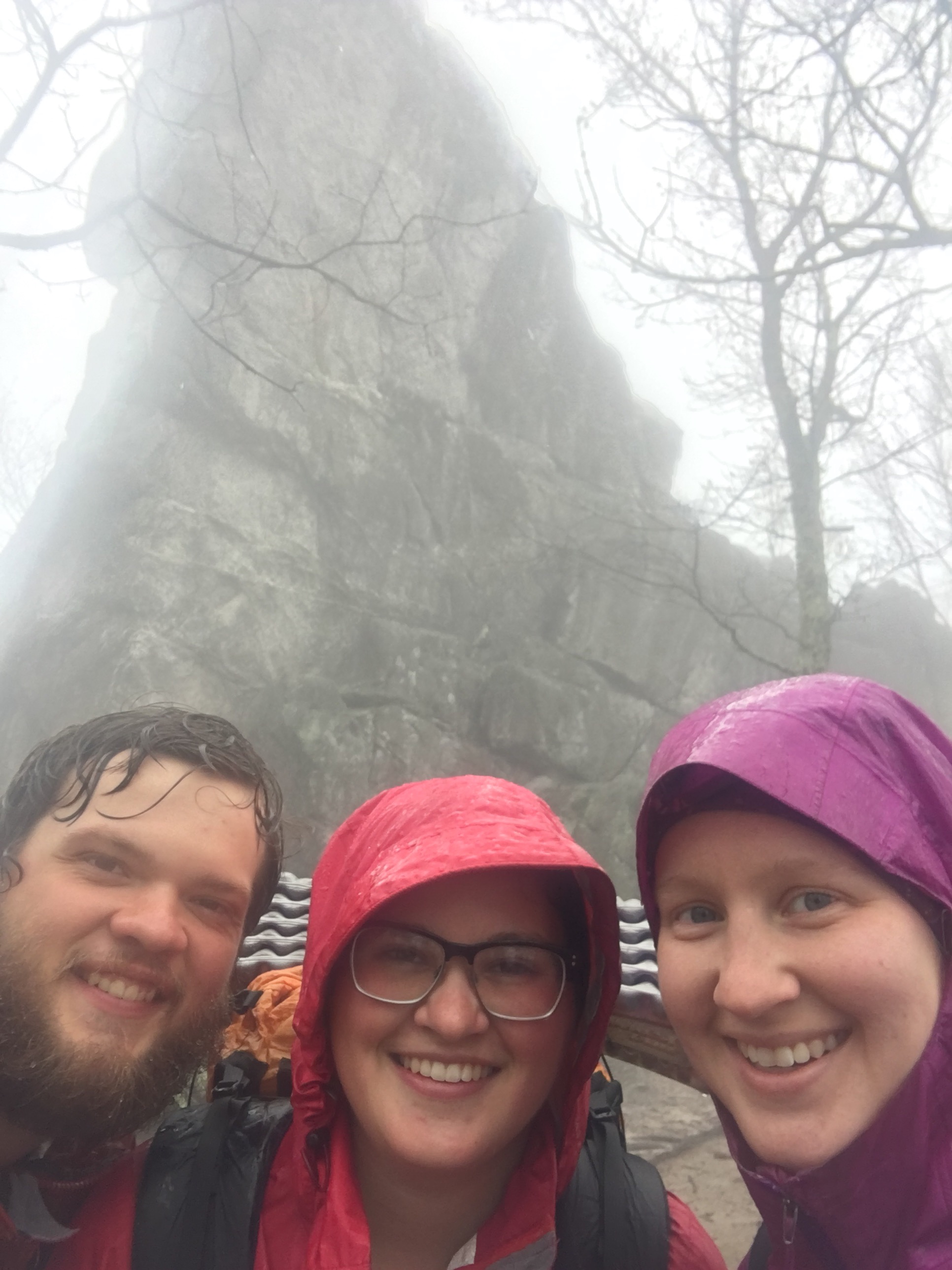 The climb up Dragon’s Tooth was a regular climb. The descent down Dragon’s Tooth was actual hell on earth. It was 90% huge rocks and 10% trail. The rocks we had to scale down were incredibly slippery from the rain and very steep. There were a few places that had rungs in the side of the rock to climb hand over hand. Our speed dropped from 2.5 mph to around 1 mph. We joked that it felt like we were getting a taste of the White Mountains in New Hampshire that are so famously rocky and steep. 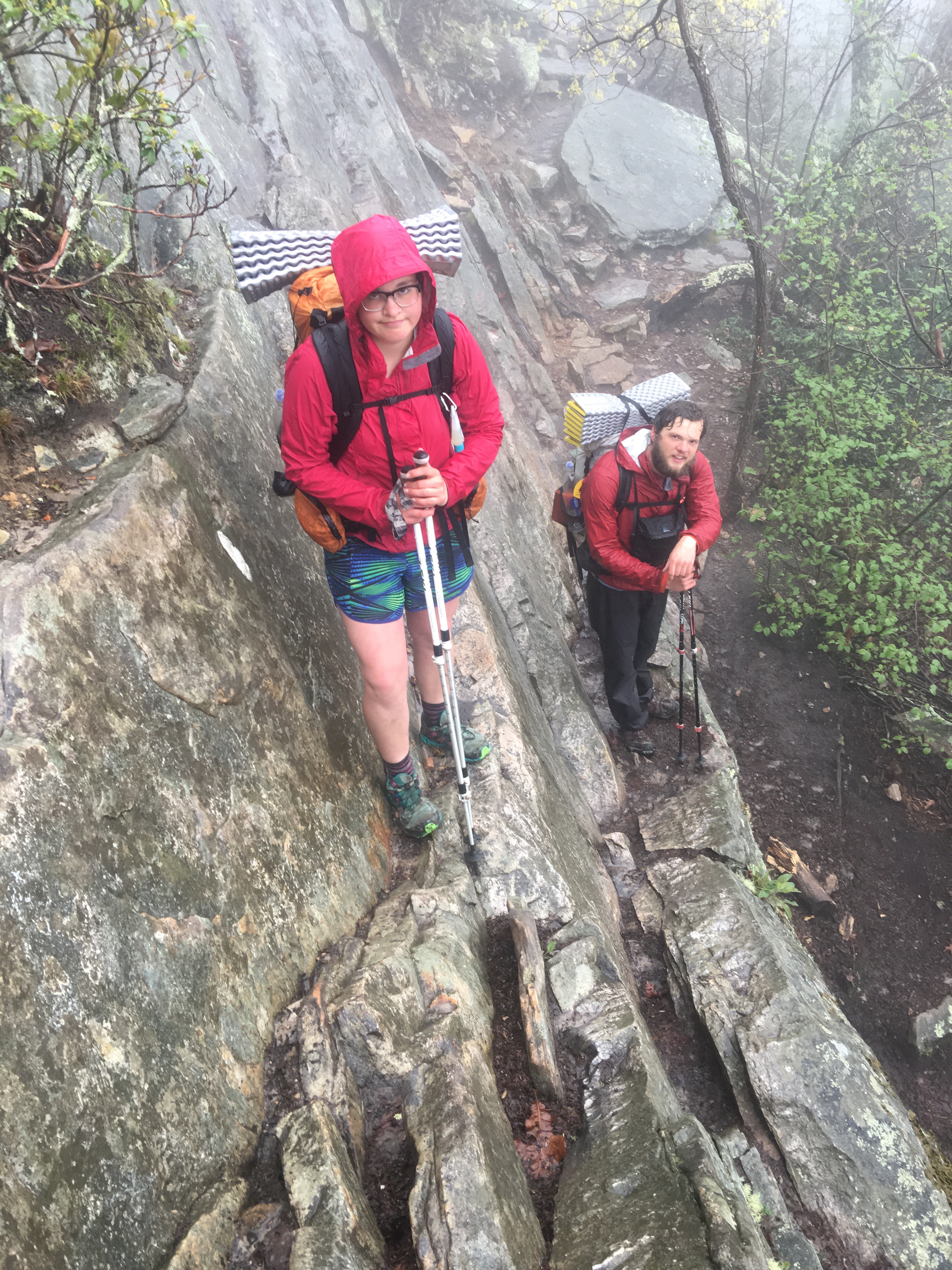 Halfway down Dragon’s Tooth, we decided to call Carol and ask her to pick us up at the McAfee parking lot so we could stay the night. We were all 3 freezing, drenched, and physically/emotionally exhausted from that slippery descent. We still had 6-7 miles to go, but knowing that we had a warm bed at the end of the day made the rest of the hike easier to bear. We ran into Squire and his 2 boys (Remix and Catch I believe) who were slackpacking. They warned us of a stream we’d have to cross that didn’t have a bridge. When we came to the stream, we debated for a little while how to get across. Finally I decided my shoes and socks were already drenched enough inside and out, so I just waded across. The water came up to my shins. Rash and Pinata followed suit. 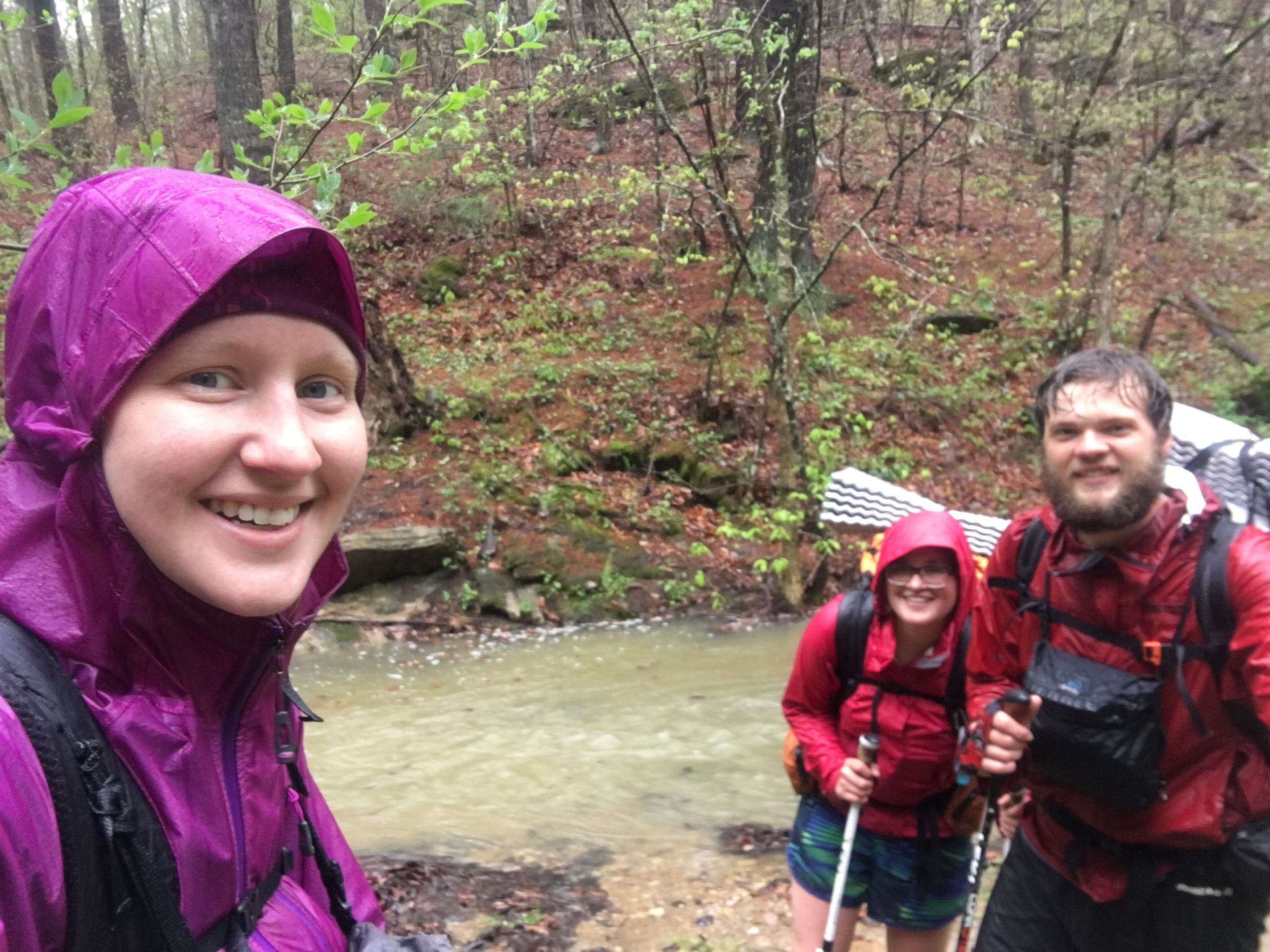 Selfie with the stream in the background 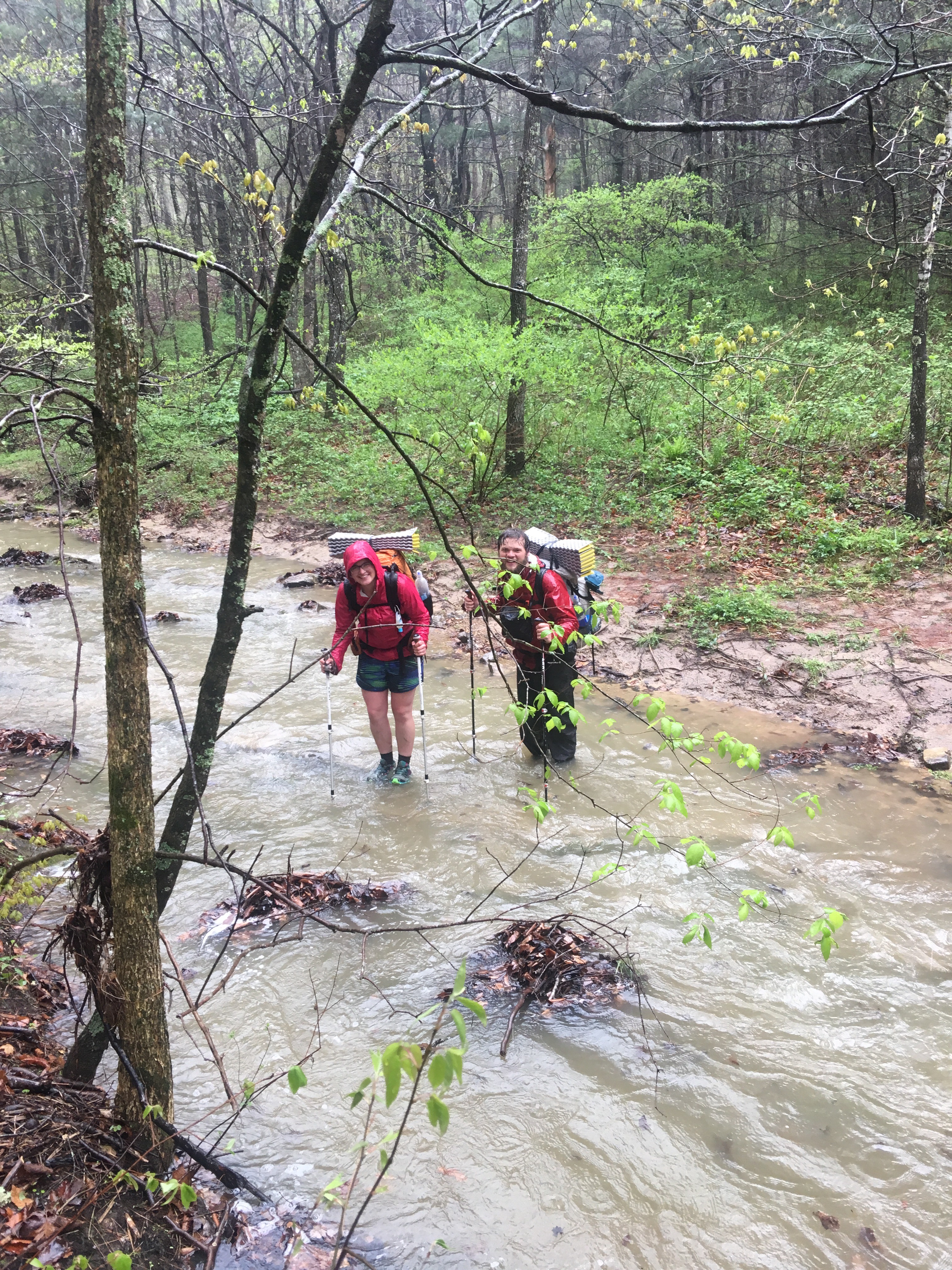 Rash and Pinata crossing the stream

After the stream crossing, we trekked through a few pastures. One of the pastures had cows right on the trail! Rash had a standoff with one. It eventually decided to mosey away. 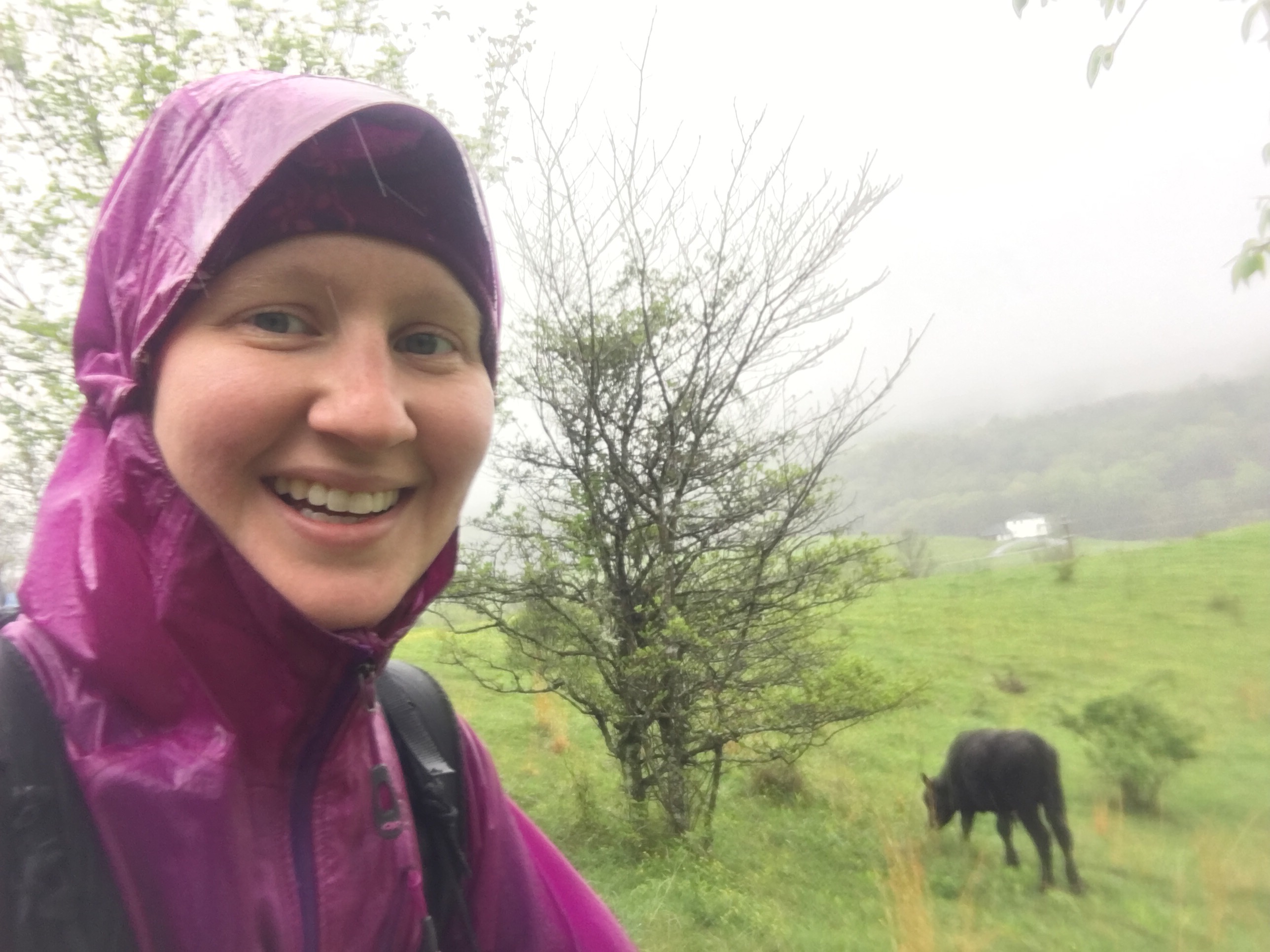 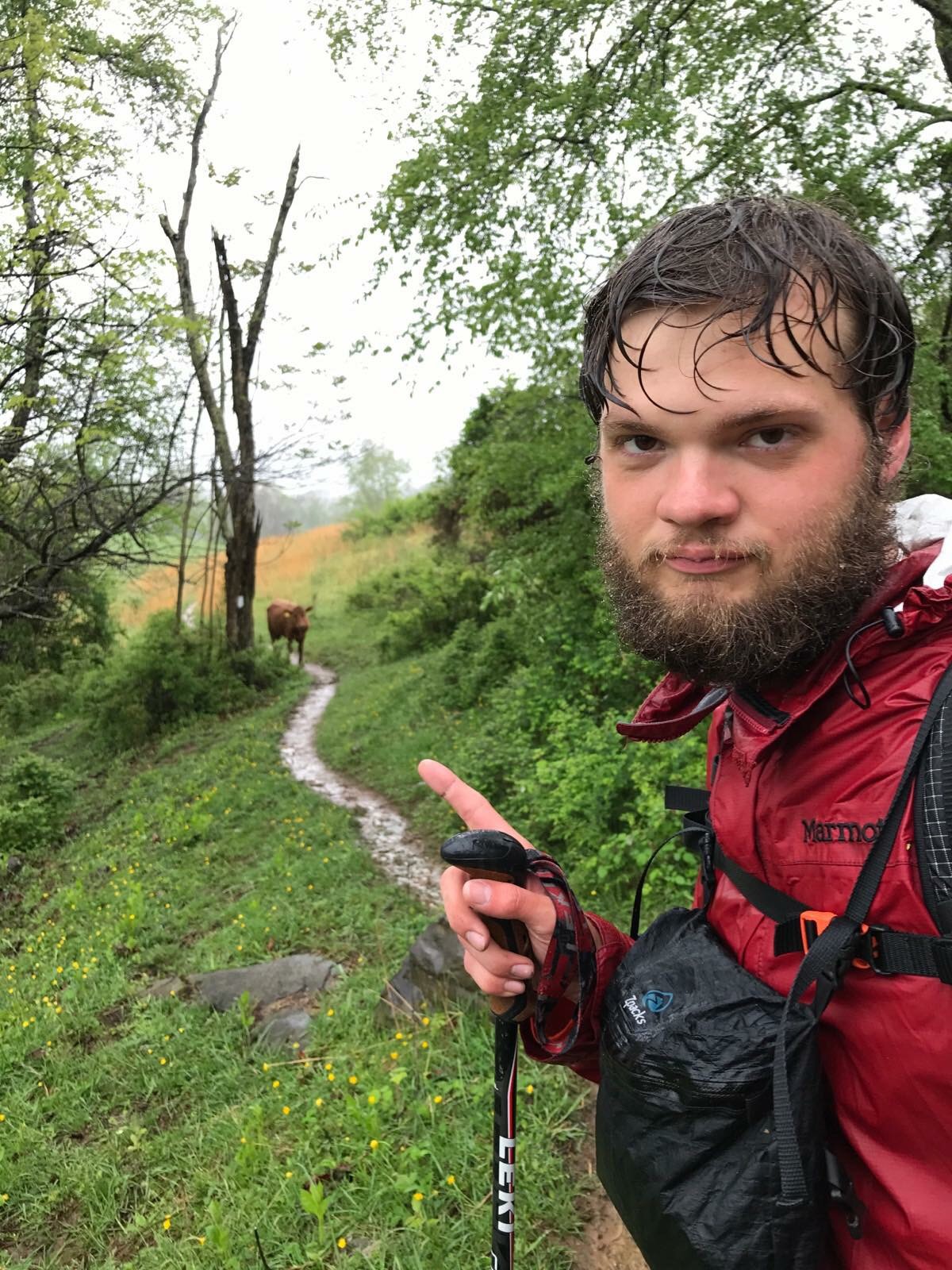 Rash with the cow on the trail (photo by Kris Mast)

We had a couple more steep climbs, then we finally made it down to the parking lot. Carol picked us up, accurately describing us as looking like, “wet rats”. We got back to their house, took hot showers, and basked in the comforts of a normal house. Dave had graciously offered us the rest of his pizza, and Carol told us to eat the leftover spaghetti, so we sat at the small table in the kitchen and ate, and ate, and ate. I had ice cream and chocolate milk left over so I downed those too. Even though we did just under 14 miles today, they were really hard miles, and we were feeling them. We vegged out on the couch the rest of the day watching Bob’s Burgers on Netflix set up by Jason. We stayed up late talking with Jason about advice for the trail.

We woke up this morning in a warm, cozy bed. We didn’t have much to pack up. I had taken my hammock out of its stuff sack to lay it out and look at how to set it up, so I put that away and we gathered our stuff up and went downstairs. I didn’t have a lot of time to eat, so I only ate a honey bun for breakfast. We took pictures with Dean, Carol, and Jason, said goodbye to the dogs, and Jason took us to McAfee knob parking area. 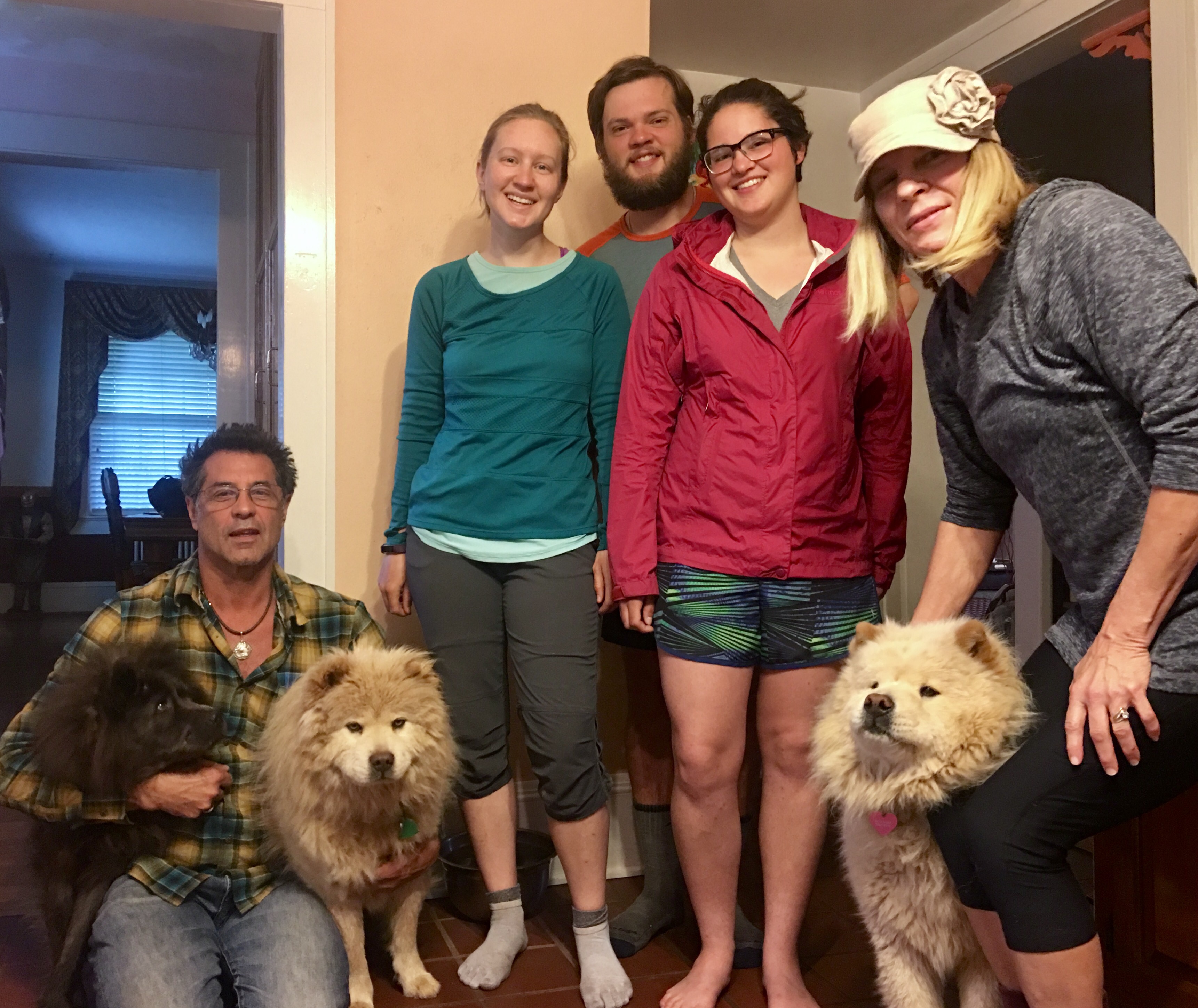 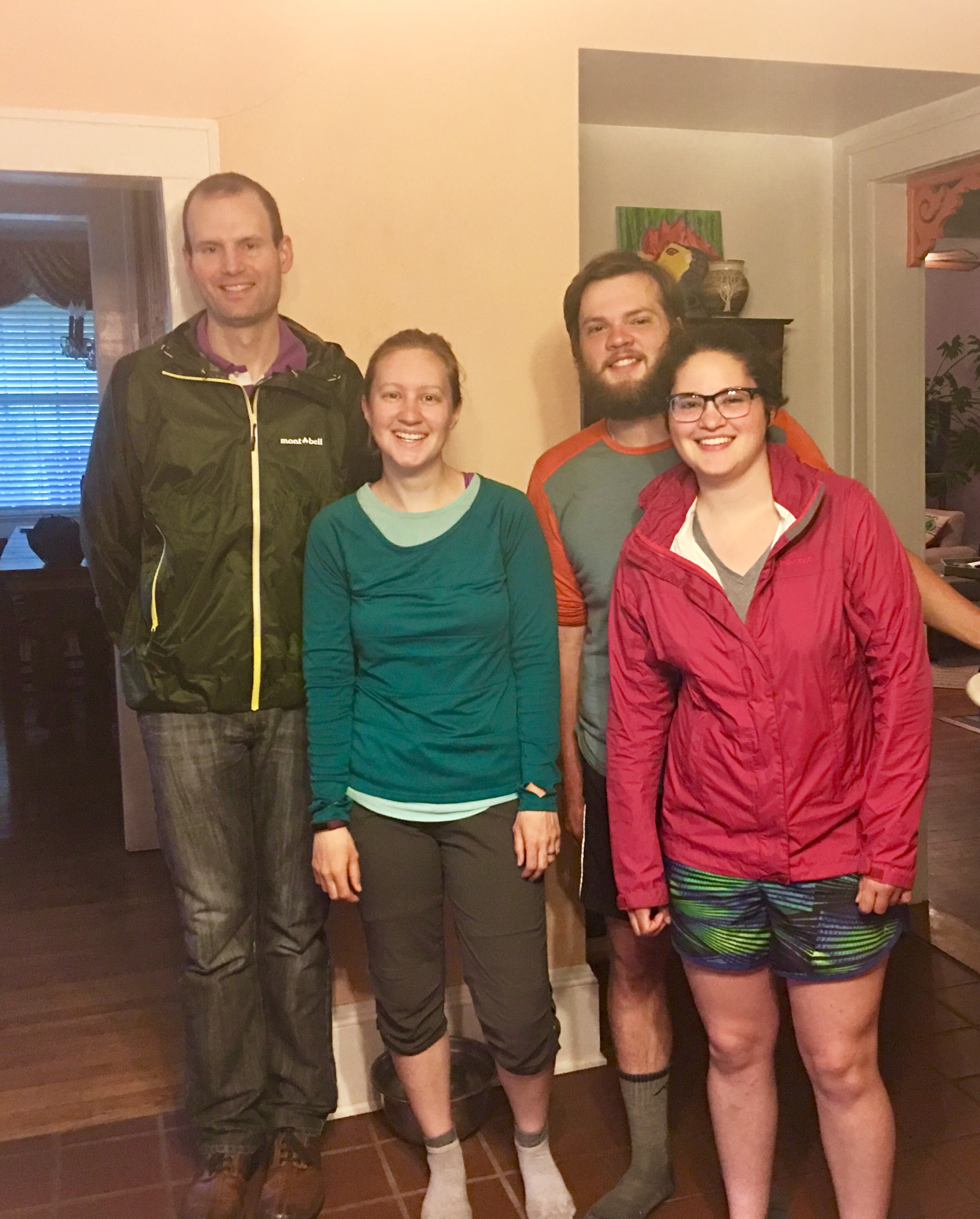 The elevation on the map going up to McAfee looked daunting. We braced ourselves for a steep climb, but it never came. The trail was wide, and besides a stream flowing down the middle from all the rain, it wasn’t a bad climb. It was very different from the regular AT, and obviously a trail geared towards day hikers which makes sense because McAfee is the most photographed spot on the AT. 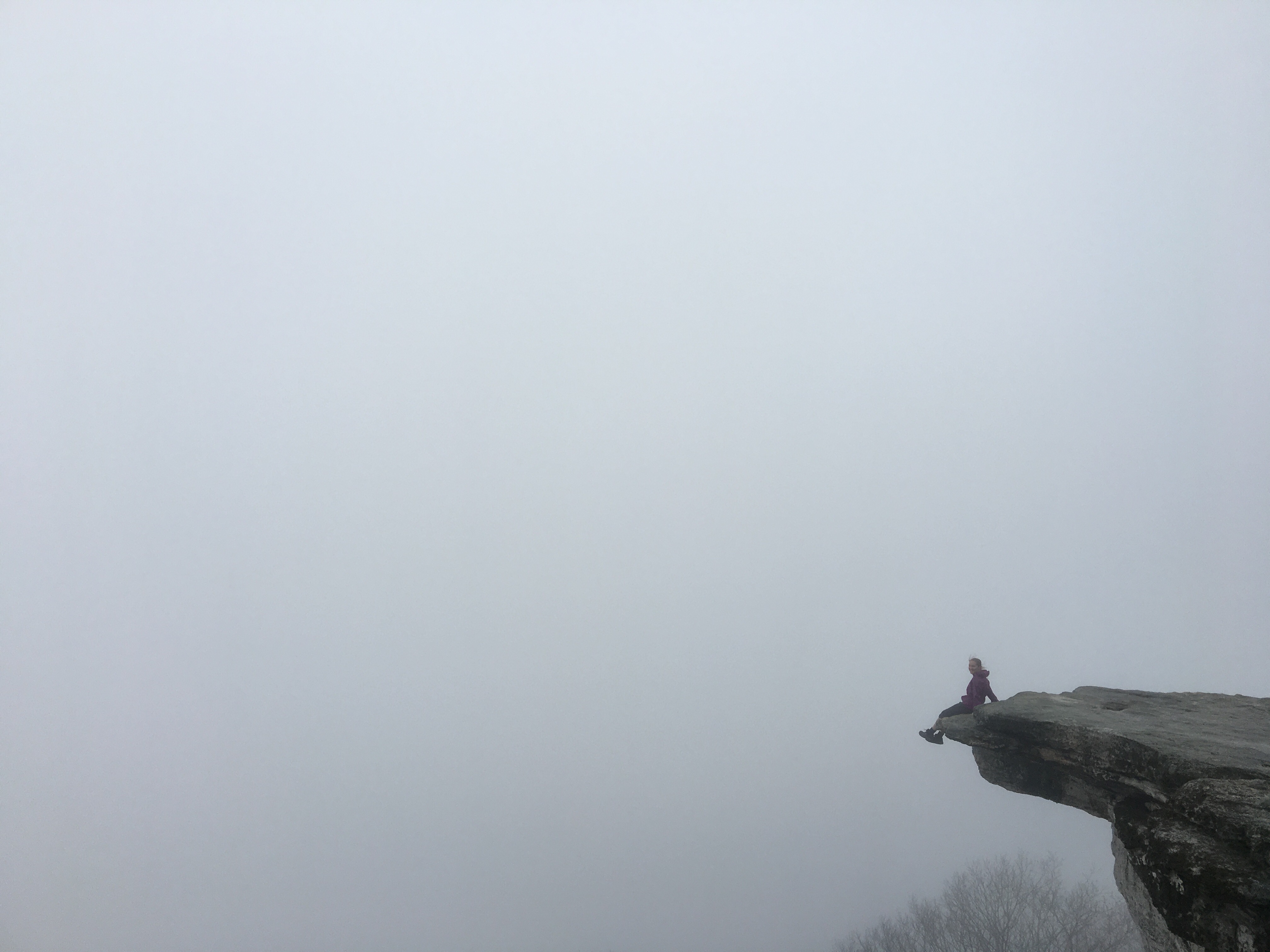 It started raining a bit before we got to the top, and at the top the wind was howling. The fog was thick and the view wasn’t impressive. We took the required pictures and got off the ridge as fast as possible since it was freezing cold.

The descent wasn’t terrible but it was still windy and horribly cold. I brought out my gloves, hat, and buff around my neck. Last time I wore all 3, I think it was snowing. Luckily, the cold didn’t last long. We stopped at a rocky ledge to take off our rain jackets and admire the outstanding view of rolling mountains with different shades of green. The clouds had cleared enough to see for miles. We were bummed that we didn’t get something similar on McAfee. 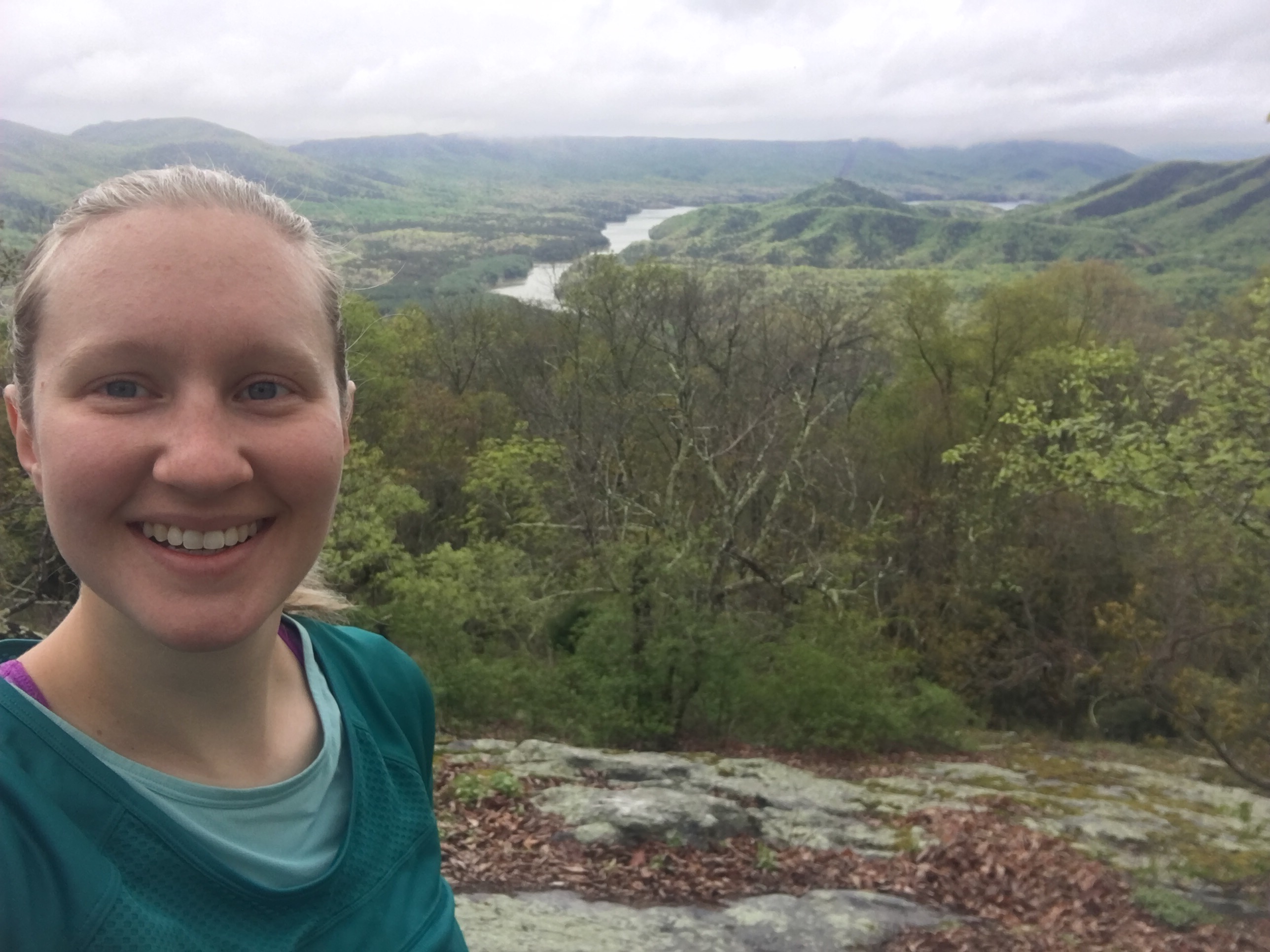 Our first view of the day!

We had a bit of a climb to Tinker Cliffs, but we powered through. Having in mind that we’ll be in town tonight with a shower and real food helps us power through climbs. We had a much better view at Tinker Cliffs, but it was still a bit foggy. 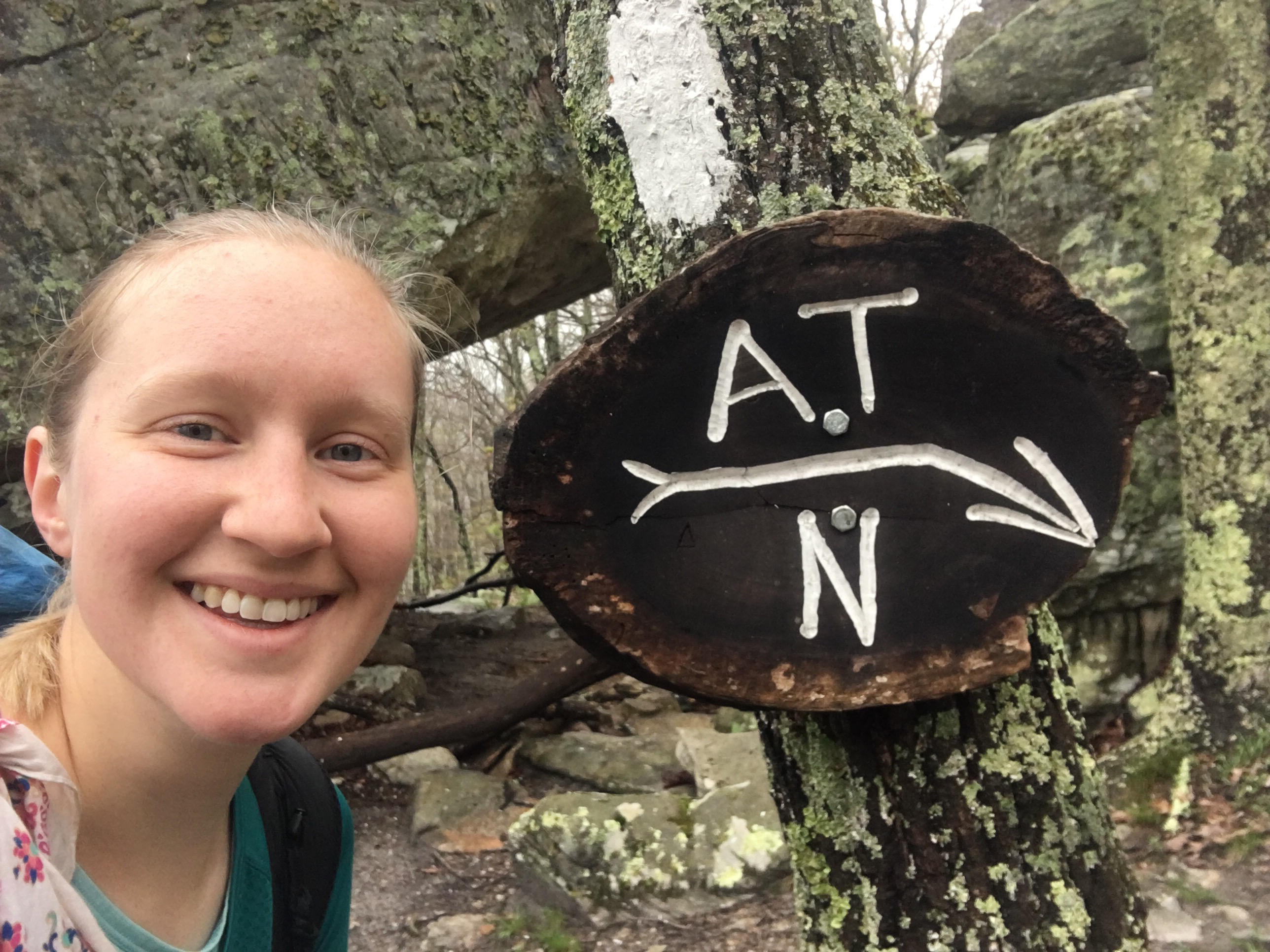 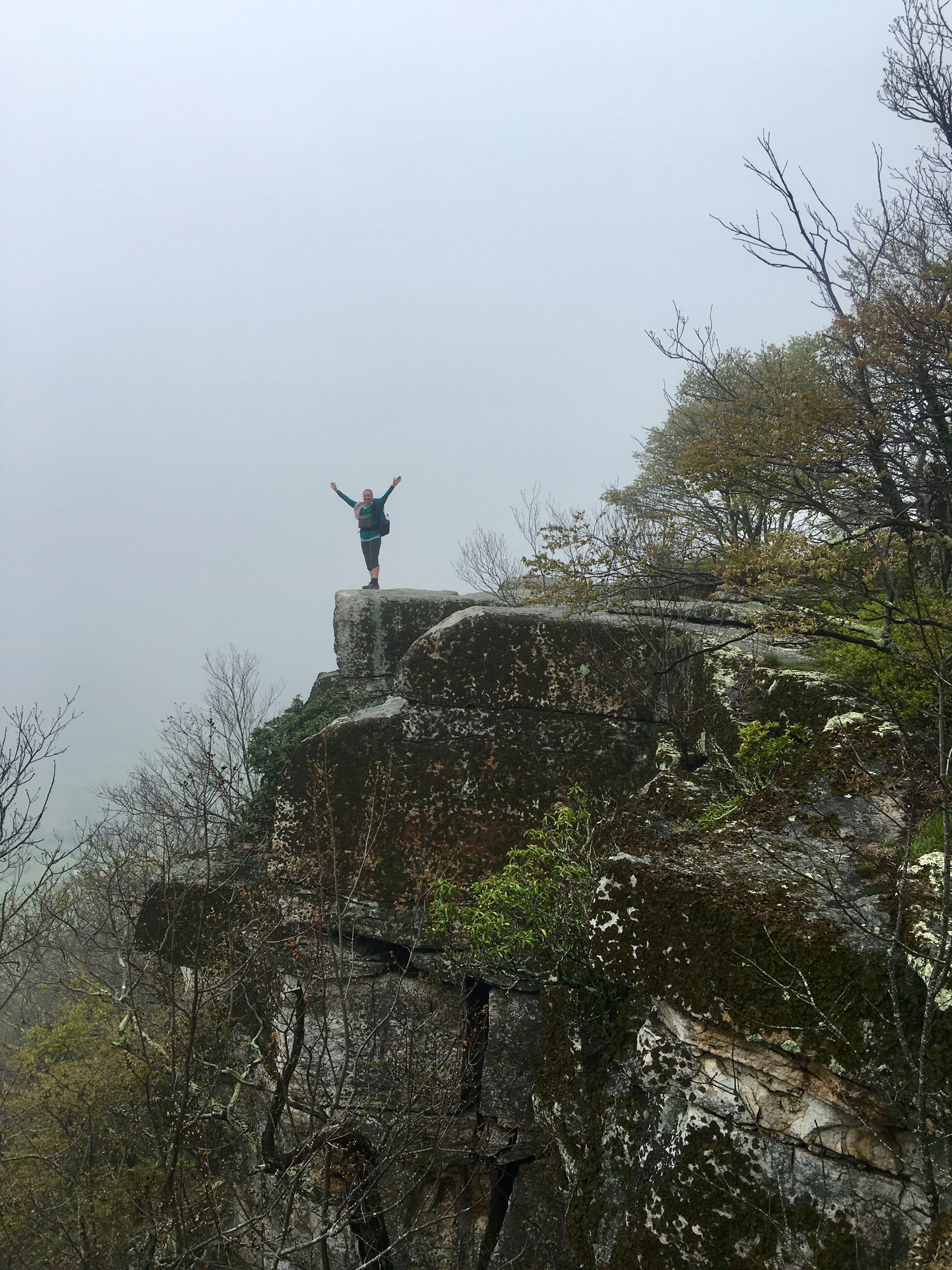 We walked along the cliff for a while before descending to the shelter where we stopped for lunch. I rigged a piece of string on my Sawyer bag so I can gravity filter, and it started sprinkling so we moved in the shelter.

We got moving again with the goal of town looming ahead. The terrain was mostly flat and the afternoon passed quickly. We got into town and it was a quick walk to the Howard Johnson hotel. We checked in, and I found a pair of ridiculously loud stretchy pants that matched Pinata’s shelter pants, so I claimed them. We showered and walked the 0.3 miles to the outfitter so Rash could get new shoes. We hopped over to Three Little Pigs and had awesome BBQ and smoked chicken. The smoked chicken was to die for, and I took the leftover BBQ to pack out tomorrow. They also give free banana pudding to hikers which was delicious. Rash and Pinata went to Kroger to resupply and I went back to the hotel. We watched American Ninja Warriors and Modern Family before bed. 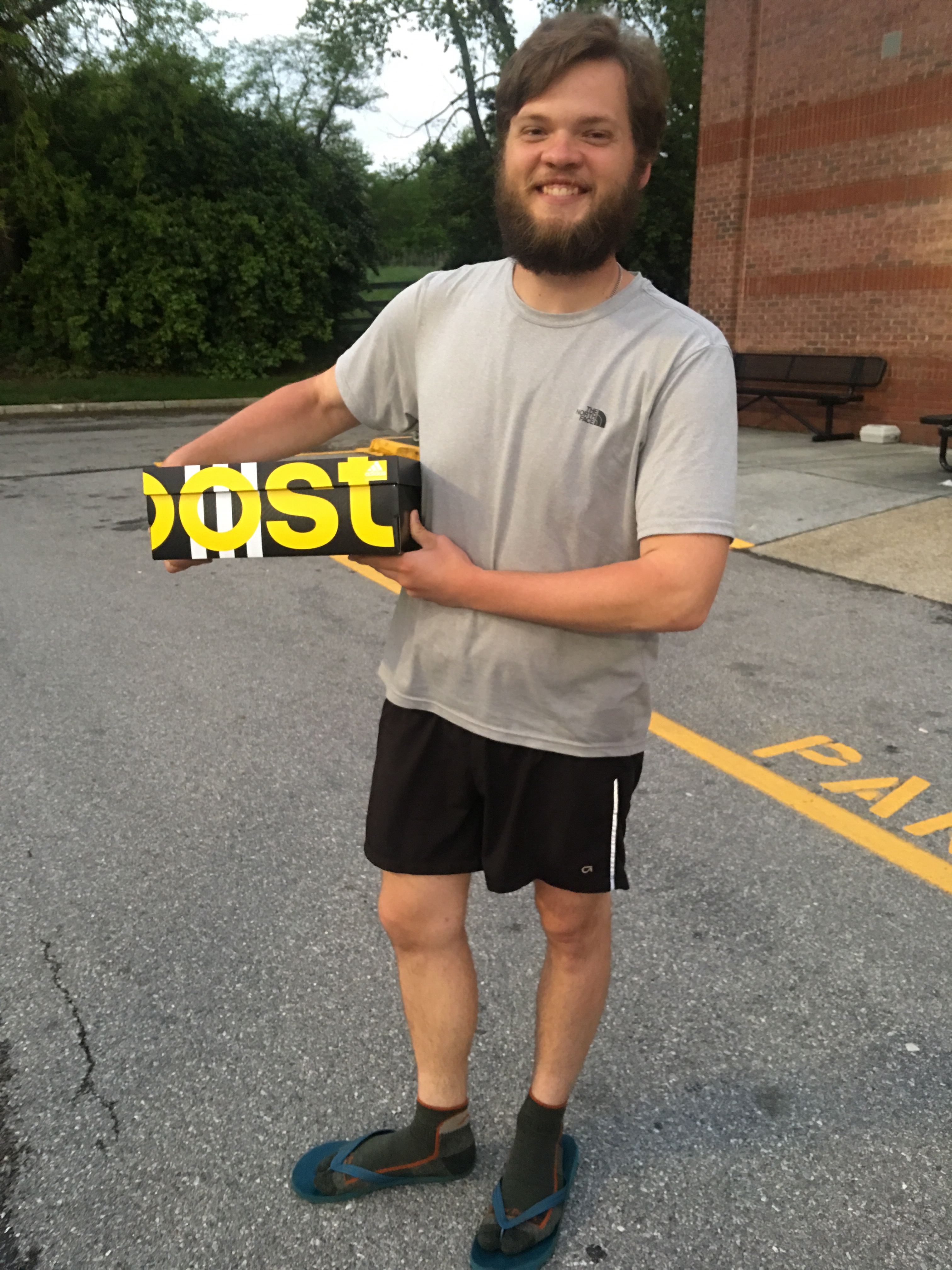 Rash with his new shoes

We woke up this morning to the loud squeaking of the AC unit. We lay in bed for a while on our phones before going down the long flight of outdoor stairs with pink flower petals littering the walkway to breakfast. The breakfast buffet was standard cereal, eggs, biscuits and gravy, waffles, and juice. Rash had an enormous plate of eggs and went back for more. I had a little of everything and went back for more cereal. I don’t think I’ve had cereal since leaving civilization 2 months ago.

We headed back to the room and like any hotel day, took forever to pack up. We enjoyed lounging around. Rash found the source of the stickiness in his multi pack: Bri’s plastic Easter egg filled with candy that got soaked in the recent rain. He cleaned everything out but almost left his credit card in his shoe box. I wrote a thank you note to Dean and Carol and packed everything up. We got checked out by 10:00 and got on the trail.

This section from the hotel I hiked with a group back in October. It was mostly flat early on with a couple bad climbs. We climbed to the first shelter and took a snack break. I called Louis and hearing his voice was long overdue. Someone left hammock tree straps so I took them, thinking maybe their owner would be at the shelter tonight.

We continued on, and later in the day we came across a stream that had no crossing. Rash and Pinata crossed it and got their feet a little wet, but I was sick of wet feet from the rain, so I took the time to take my shoes off and cross barefoot. I wanted to let me feet dry and rest a little, so I told Rash and Pinata to go ahead and I’d meet them at the shelter for lunch.

After my feet dried, I continued the hot climb to the shelter. There was another stream crossing, but I found a precariously perched log that I used to cross. I felt like I was walking a tight rope. I made it to the shelter for lunch and we were all exhausted. The heat was sucking the energy out of us. We slowly continued on. 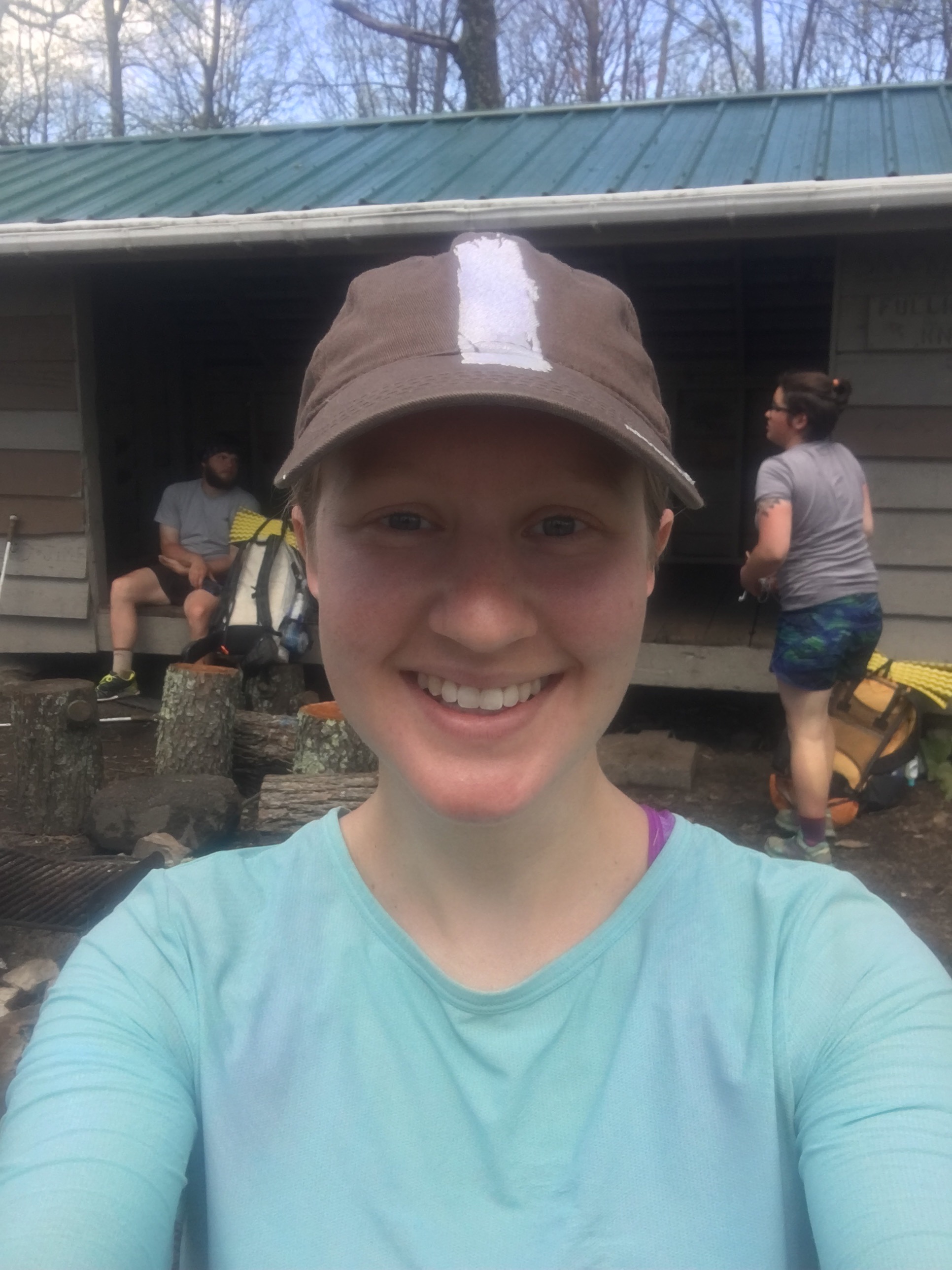 We were trying to get to the shelter before 8:00, but it was hot, and we were hiking slow. We crossed the Blue Ridge Parkway a few times, and climbed a few short but very steep hills. I remember this section from my hike in October, but the landscape then was dull and brown. Today, it was peppered with small, brightly colored deep purple, red, and yellow flowers. 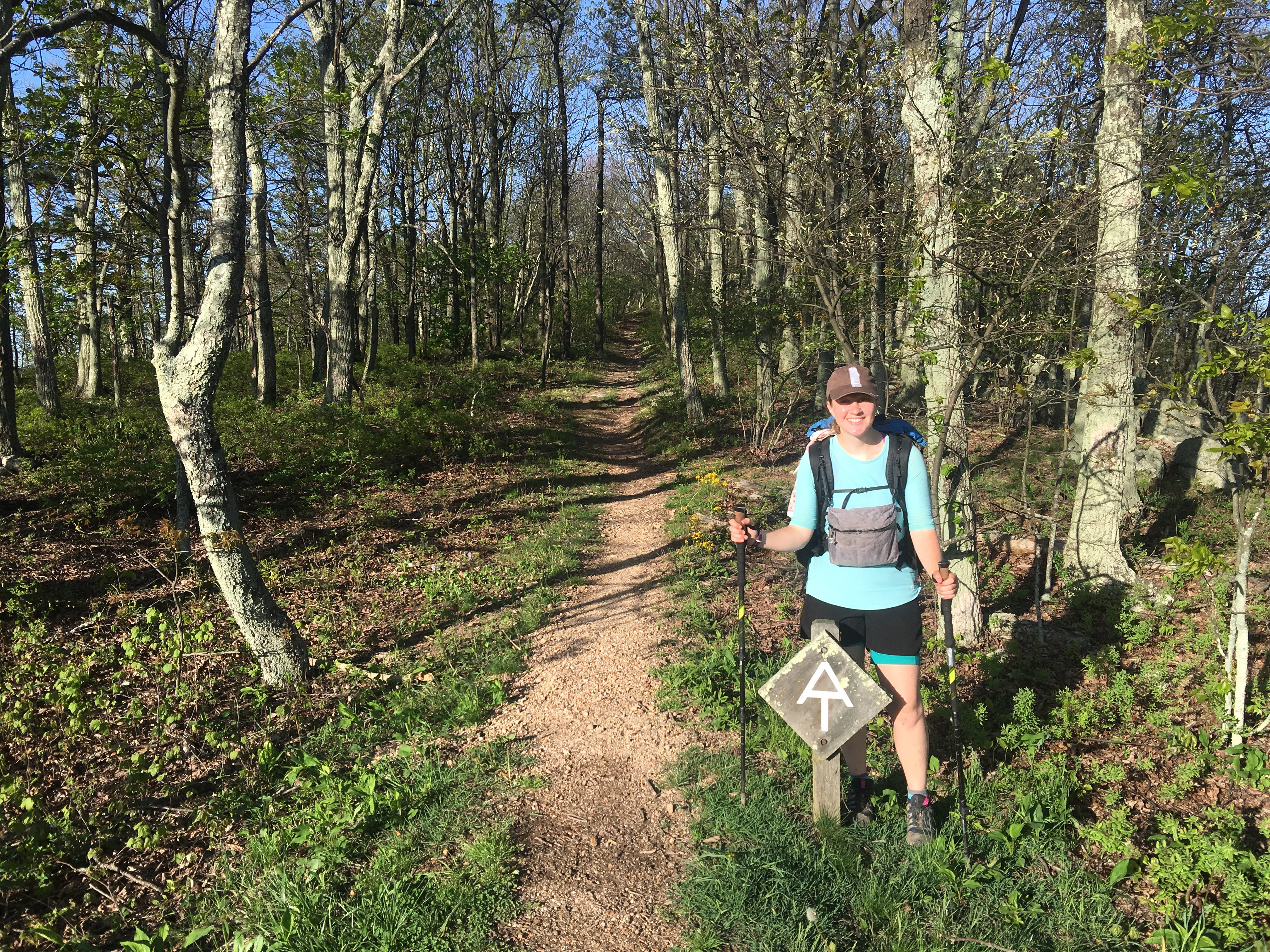 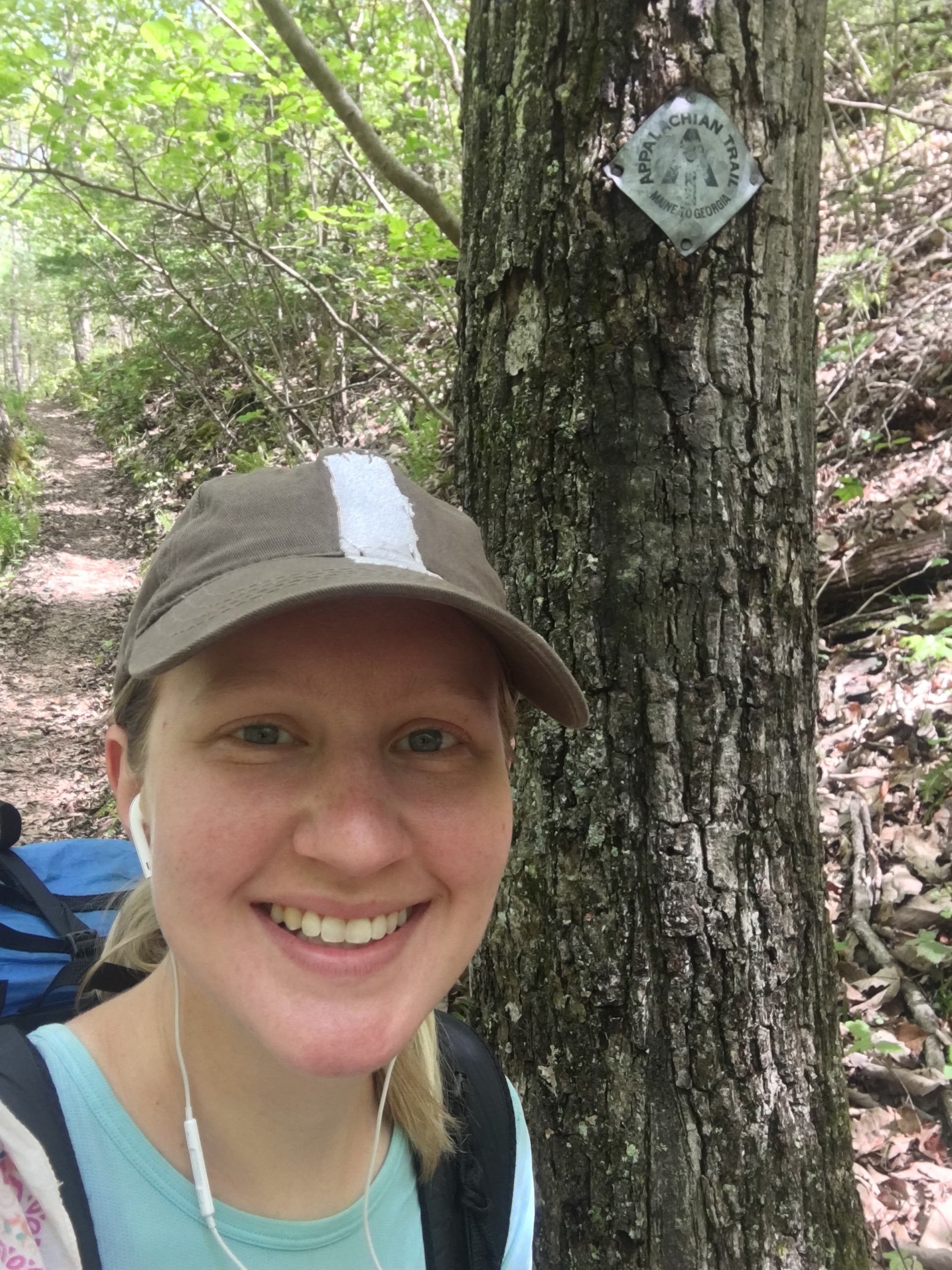 One of the rare, old metal AT markers

When we finally came to the shelter sign, we still had 0.2 miles to go down steep switchbacks. It felt more like 0.3 and was treacherous. Seeing the shelter was, as always, a wonderfully welcome sight. We got there a few minutes before 8, and there was one other hiker in the shelter in his sleeping bag. I was excited to set up my hammock for the first time, and since there was no rain in the forecast, I forewent the tarp. Rash hammocked next to me and Pinata decided to sleep in the shelter. 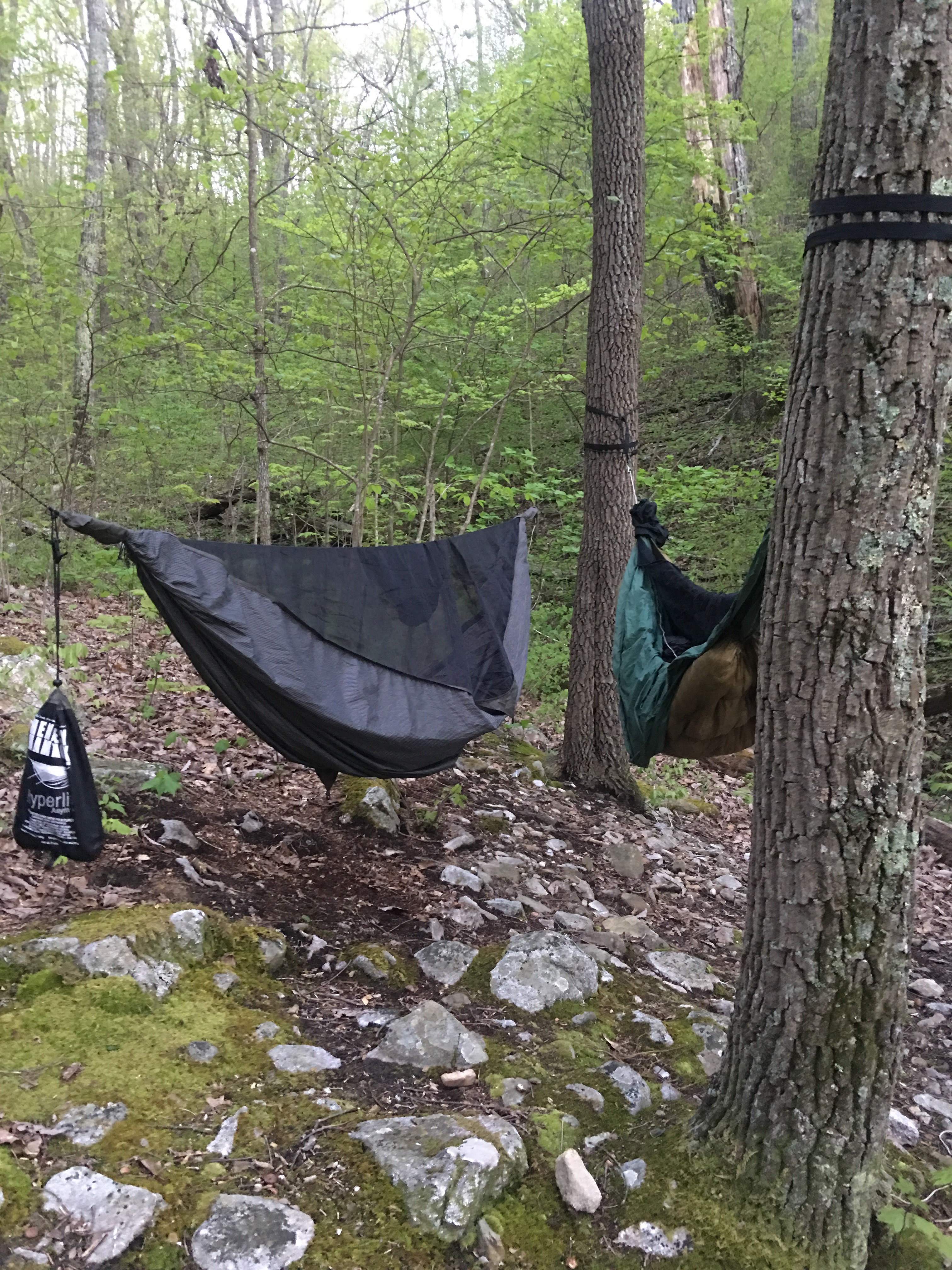 My and Rash’s hammocks

We all cooked in the shelter because the picnic table was insanely slanted. Everything we put on there rolled off. I ate my leftover BBQ sandwiched between bread toasted in butter. It tasted like a slider but better. I crawled into my hammock and since I didn’t put up the tarp, I had a view of a sky full of stars through the bug mesh.