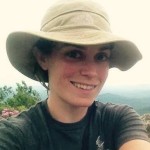 The Real Deal: My Encounter with the Triple Crowners

I’m not sure where I first encountered One Gallon, but it was sometime around Fontana Dam. I had been keeping mostly to myself; camping rather than hitting the shelters and avoiding the spring-break hiker-bubble vibe. He was an unpresuming hiker, I only noticed that he was hiking in shorts and a sleeveless t-shirt and wasn’t weighed down with all the Osprey-this and Leki-that which 99 percent of us were sporting. Quiet but friendly, with wire glasses and a slightly rolling gait; you’d miss him on a Trail full of dyed hair, kilts and shenanigans. We ate dinner, chatted, and called it a night at the usual hiker time of 8 pm.

The next day I hiked with another first time trekker; Stick in the Woods. We were entering the Smoky Mountains with enthusiasm and a little apprehension. Stick had a schedule to keep and needed to hot foot it through. I just wanted to make it without stopping for a resupply. About midday we bumped into One Gallon who was meeting some friends at Russell Field Shelter. He easily strolled ahead of us as we huffed up the hills though. When we got to Mollies Ridge, we decided to push on to Russell Field to get a jump on the next day’s walk. Little did I know what a treat we were in for! 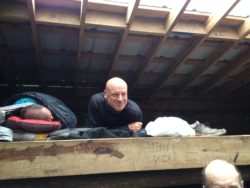 One Gallon staying dry on a rainy AT.

We came around a bend and ran across a tall blond guy collecting firewood. He introduced himself as Woodford (yes, after the bourbon), and told us that a bunch of Triple Crowners were meeting up at the shelter, that he was with them, and that they’d brought plenty of food they’d be happy to share. The food info was all I needed to cruise the final stretch over to the shelter. Once there, we found the party underway. Woodford and two seasoned hikers, Ed and John, were keeping a fire going in the shelter.Wildcat was playing the role of host; as it turns out he lives close by and built the porch and helped renovate the shelter awhile back.  I told him I had heard he was a Triple Crown hiker; he leaned forward and (tipsily) informed me that there was a “Triple, Triple Crowner here”. When he told me he was talking about One Gallon, it caught me by surprise; he’d mentioned paddling canoes and bikes but not that he was such a veteran hiker! The evening was chaotic with food and drink, mud and rain; then the sky really opened up. Tired from the day’s hike I retreated to my tent as the party went on in the shelter. 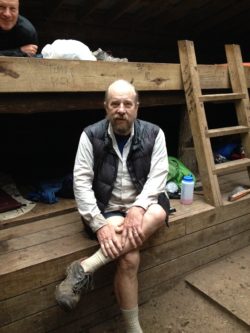 Wildcat in his natural habitat.

In the morning, I got up to a flooded tent and rain still falling. It was going to be a nasty, cold, wet day. I packed up my soggy gear and headed over to the shelter. One Gallon, Wildcat, Ed, and John were inside doing what smart hikers do on days like that; staying in their sleeping bags. As they started to stir, I asked them if I could do a short interview for this blog. N.B. This interview has been edited for conciseness and clarity.

How did you get your trail names?

One Gallon: When I hiked the AT in 1982 and got to Harper’s Ferry, there’s the half gallon challenge. I ate a whole gallon and walked 8 miles.

Wildcat: The Kansas City mascot. It was my CB handle; I drove Jeeps off-road.

What trails have you hiked; what’s your ‘trail resume’ like?

What got you into hiking? When did you start?

OG: In 1980 I got into bicycling. August of 1979 I started bike commuting and was in a club, then in 1980 I did RAGBRAI. I did a cycling trip I tell people I started in Des Moines and went to Dallas but crossed 33 states! That started my fascination with self propelled transportation.

How did you guys meet?

OG: In 2004 we both hiked the PCT. You (WC) were hiking with Super Dave at the time? Anyways, we were in Southern California and Wildcat was eating this cinnamon roll; he was going to pack one out. I remember I wanted to eat that cinnamon roll!

In your opinion, what is the best trail to hike?

OG: In 1984 I hiked the PCT and got hooked on the scenery. An Iowa farm boy had never seen scenery like that!

OG: Well, I eat a lot of peanut butter… it’s a love/hate thing with the ice cream. I crave dairy on the trail… I’m going to have to go with peanut butter; sad to say that’s my favorite food!

Sort of a philosophical question: why do you hike?

WC: I enjoy getting out and getting close to nature.

OG: It’s a passion? Inner peace? The rhythm; it’s mesmerizing, like looking into a fire… you get into the zone.

Have you seen trail life change? How?

OG: It’s changed a lot, some of it good, some of it not. There’s a lot of younger kids; what I call the convenient and comfortable age.

Do you have a favorite trail story?

WC: In 2007 I was hiking the CDT with One Gallon, I got off (trail) for my son’s wedding in New Hampshire. I was the last SOBO and it was solo hiking for 3 months. It started snowing… 30 inches of snow in the Gila Wilderness. All 10 toes got frostbite. I had to get in my sleeping bag to thaw them out. One Gallon was waiting at Doc Campbell’s Post and I didn’t show up. He called my wife; she’s not worried to not hear from me, but when he called she got worried. I walked out 40 miles and came to a ghost town, but there was a forest road. I got a ride into a real town. They said only 2 people have walked out of the wilderness once the snow started; Geronimo and Wildcat!

OG: The whole time I was sitting in a hot tub at Doc Campbell’s. I soaked for three days waiting for Wildcat; that’s how long it takes to get the old dead skin off from walking. I told Wildcat when he got there ‘I finally got clean!’ (laughs).

How do you balance trail and home life?

WC: I live close to the AT.

OG: I guess I don’t… I keep a lot of stuff at my folks’ house like collapsible boats.

Do you have any advice for people interested in getting into long distance hiking?

OG: Well, maybe not; it’s getting pretty crowded up here. Oh, tell the comfortable and convenient generation to get off their ass (laughs)!

Hey, I'm Katie and I'm thru hiking the Appalachian Trail in 2017. I enjoy long walks through the mud and eating dessert first. In my spare time I like to nerd out on nature and occasionally shoot things.