The Cold, Hard Facts of Finishing. And Now What?

I left Marion, Va., on Wednesday, Nov. 16, and arrived at Springer Mountain on Tuesday, Dec. 19. That’s 34 days, two of which were zeroes in Hampton, Tenn., and Hot Springs, N.C. That’s 532.6 miles, 15.67 miles per day average, or 16.64 on hiking days. I’m going with hard and fast details right now because I don’t really know how I feel about the last section. There is but one fact: I hiked that amount of days over that section in that amount of time. Other than that, everything is a mess in my mind: It was cold. I’m wearing T-shirts in my pictures. It felt endless. It felt like a minute and half and then I was back in New York, drinking with friends, wondering how my legs had gotten so jacked. I counted miles during breaks, aching to be done. I wondered if I could just turn around and hike back to Katahdin, wanting it to never end. 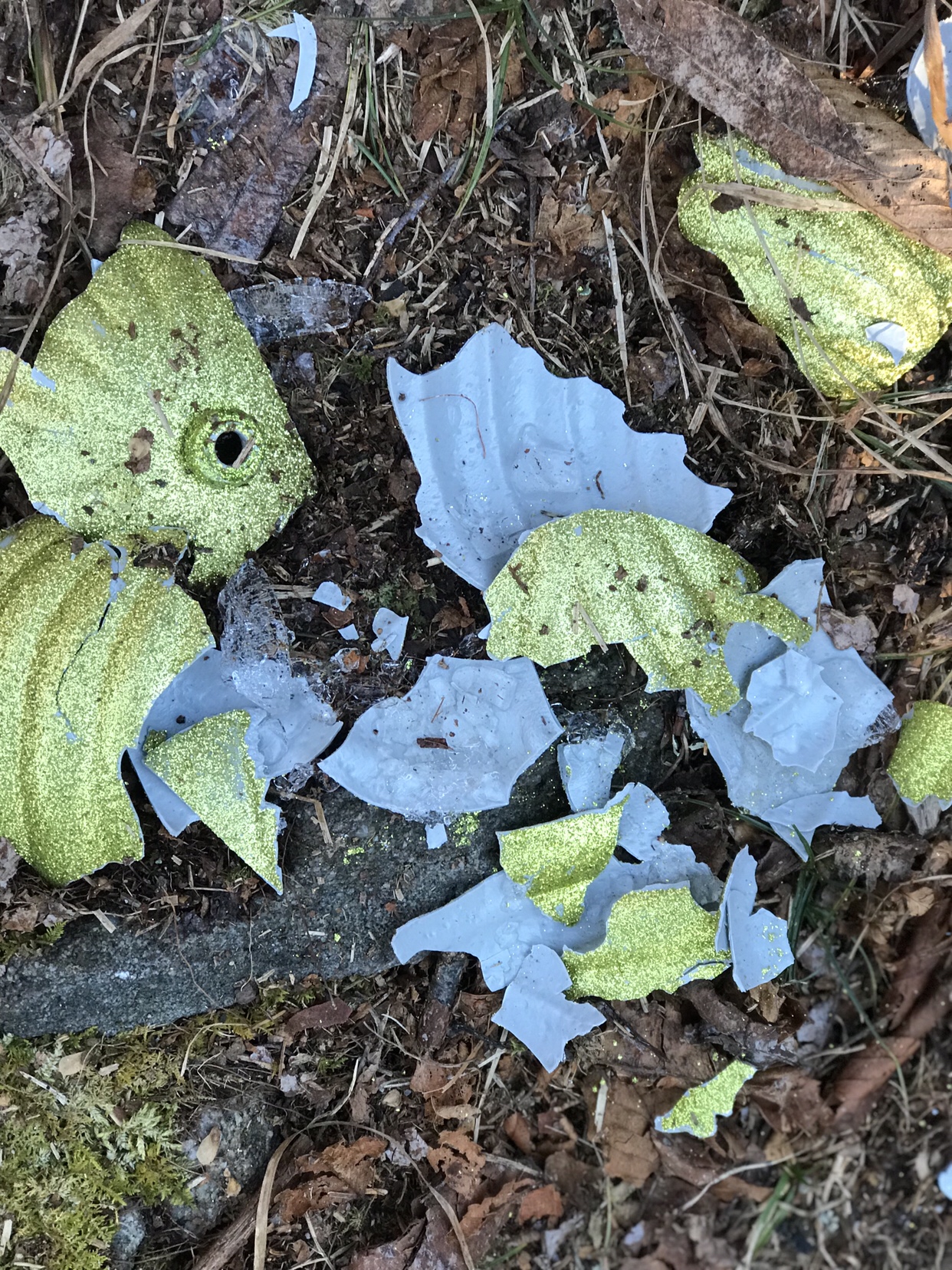 Beauty in the Breakdown.

What stands out to me most about Tennessee and North Carolina is the juxtaposition of beauty and misery. I walked into Tennessee, where a dusting of snow had fallen, and couldn’t believe I was sleeping outside.

I spent Thanksgiving in rhododendron bushes with no cellphone service and someone I barely knew, and I couldn’t remember what the point of the damn hike was. I crested the Roan Highlands and the Balds, and it was glaringly obvious: This. 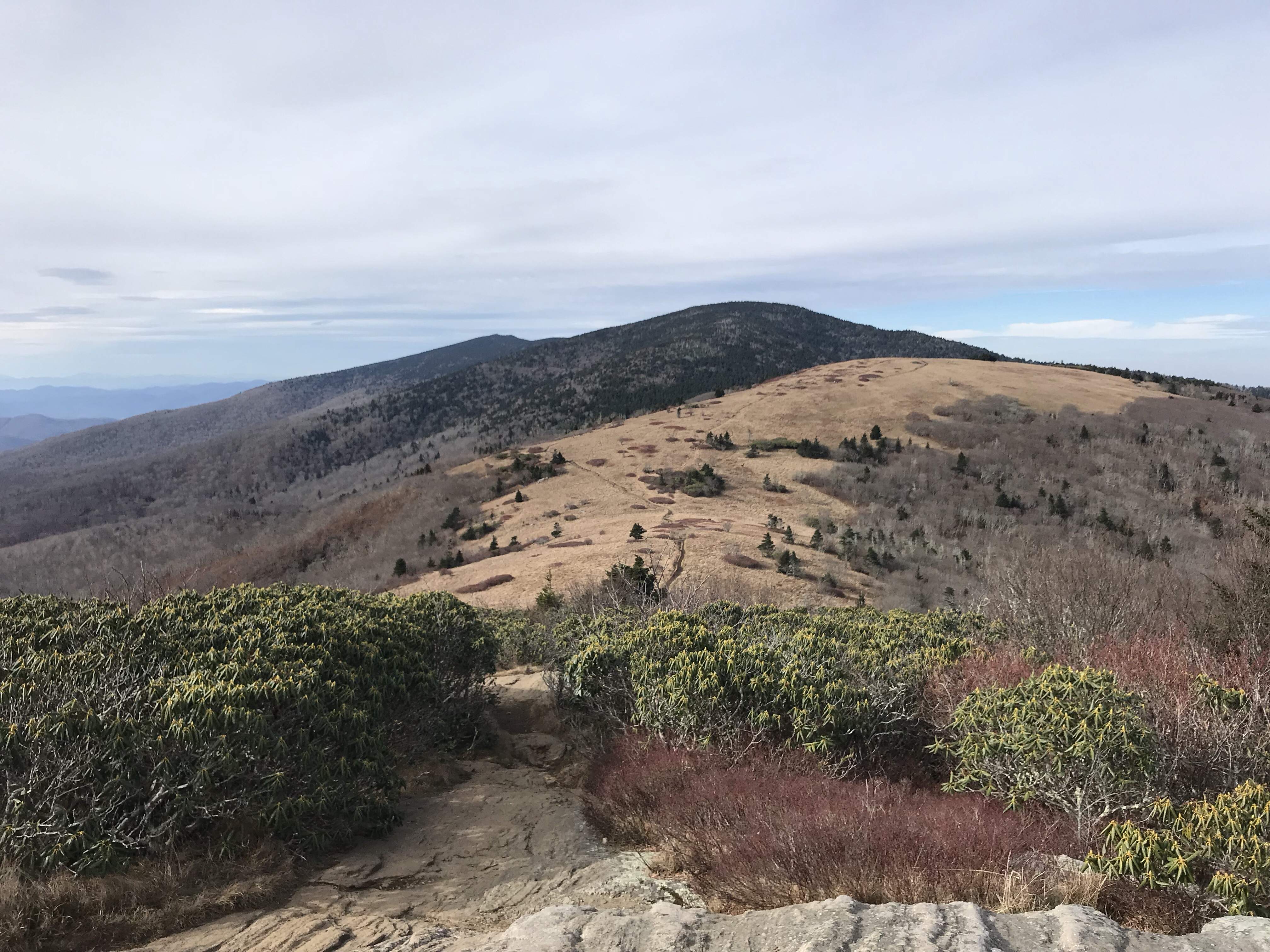 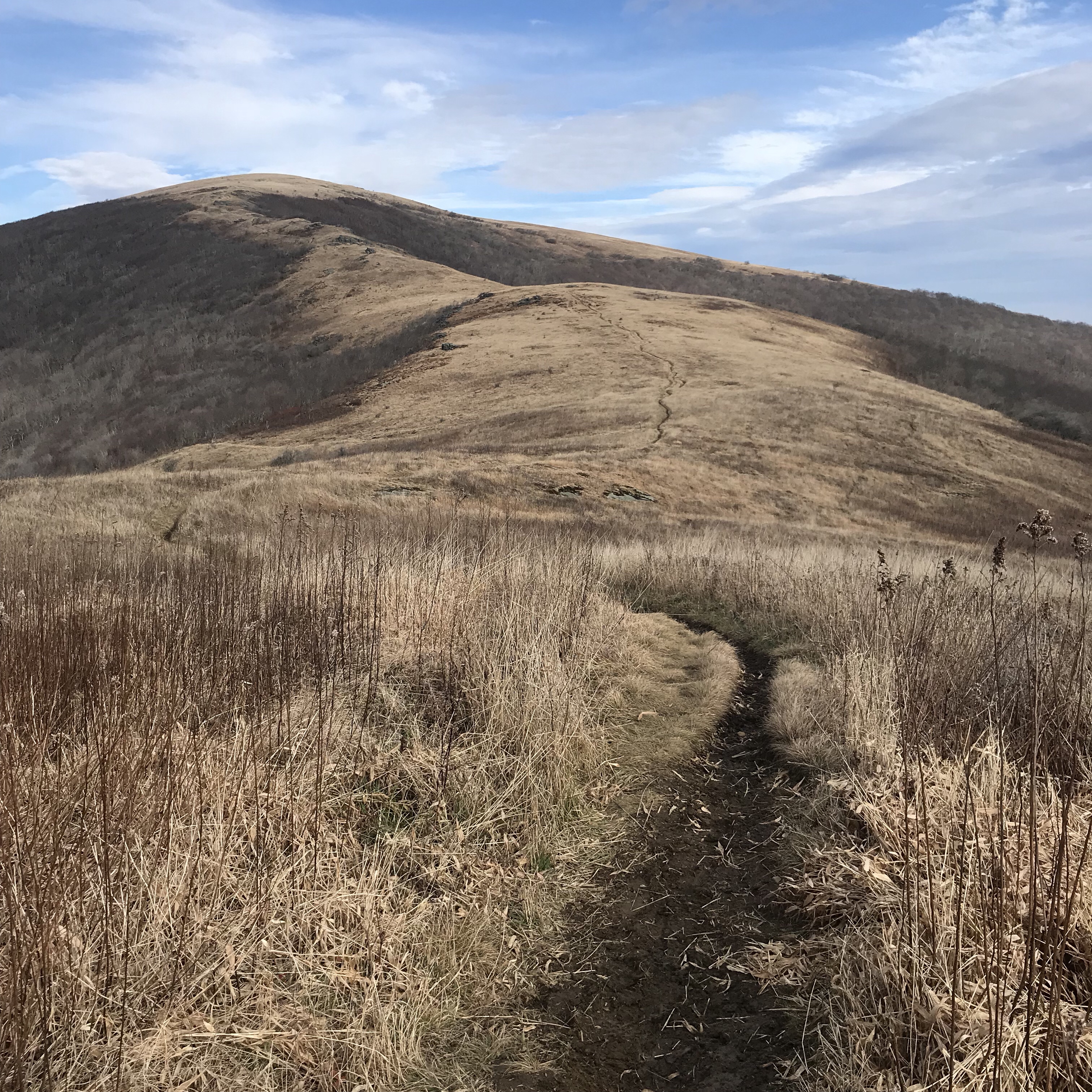 Tenting alone on Beauty Spot, I pushed thoughts of murders past to the back of my mind as I gasped audibly at the quickly streaking sky. A family of five was watching the sunset as well, and they gave me cashews, chocolate chip cookies, and congratulations. When you’re hiking, it’s easy to forget that not everyone else is hiking. It dawned on me that regular people thought this endeavor was impressive, and in that moment, I did too. 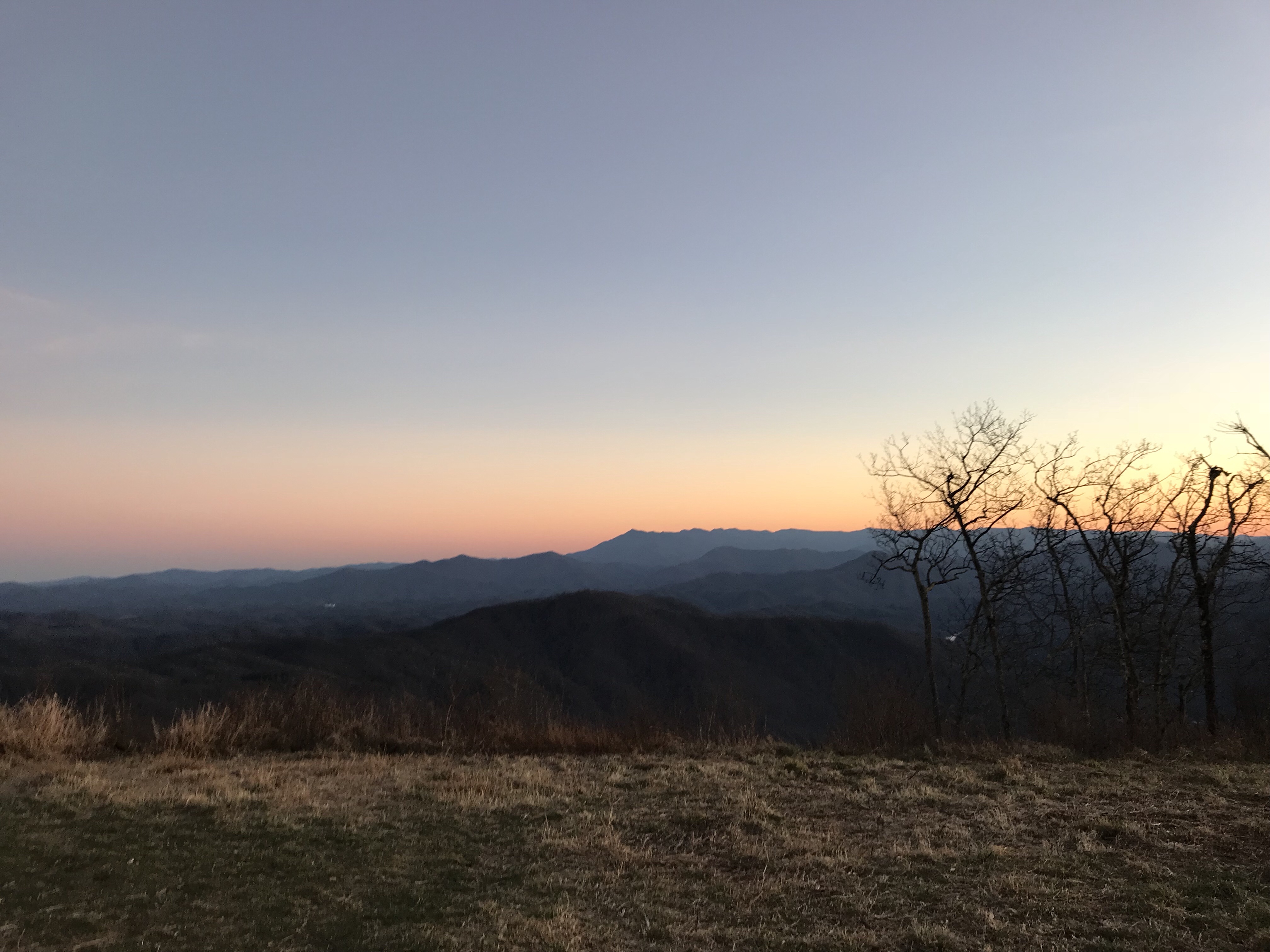 We hit Max Patch on the night of the super moon, and tented atop the grassy bald, the epicenter of a bowl in the mountains, surrounded by darkening peaks and streaky clouds. It was warm out, and brighter at night than it had been during the day. The subsequent endless, waterless ascent into the Smokies, collapsing at a trickle of a stream about a mile before the Mt. Cammerer lookout tower, dizzy, weak, and scrambling for headlamps because there was no way to pretend we weren’t night hiking anymore. 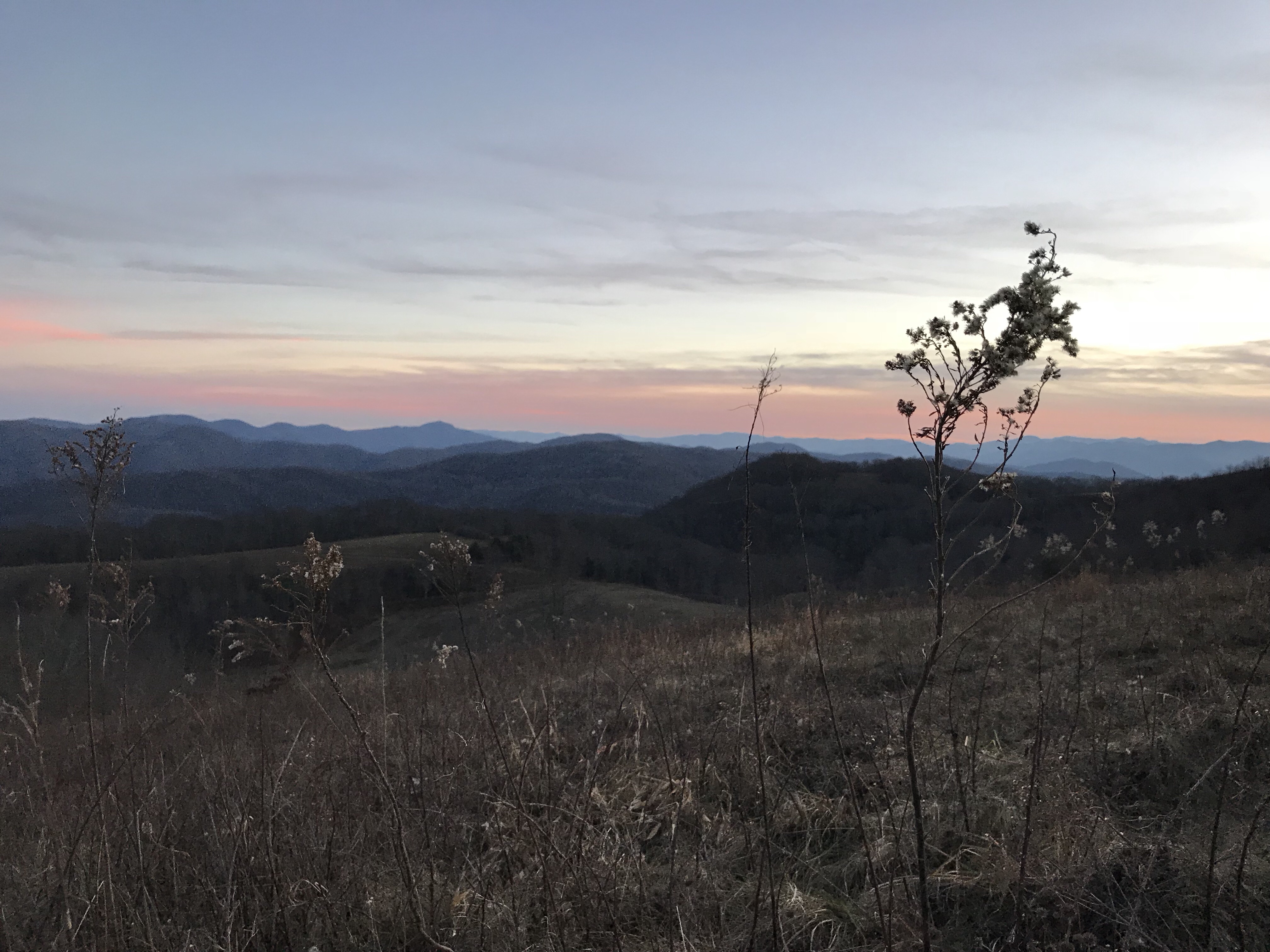 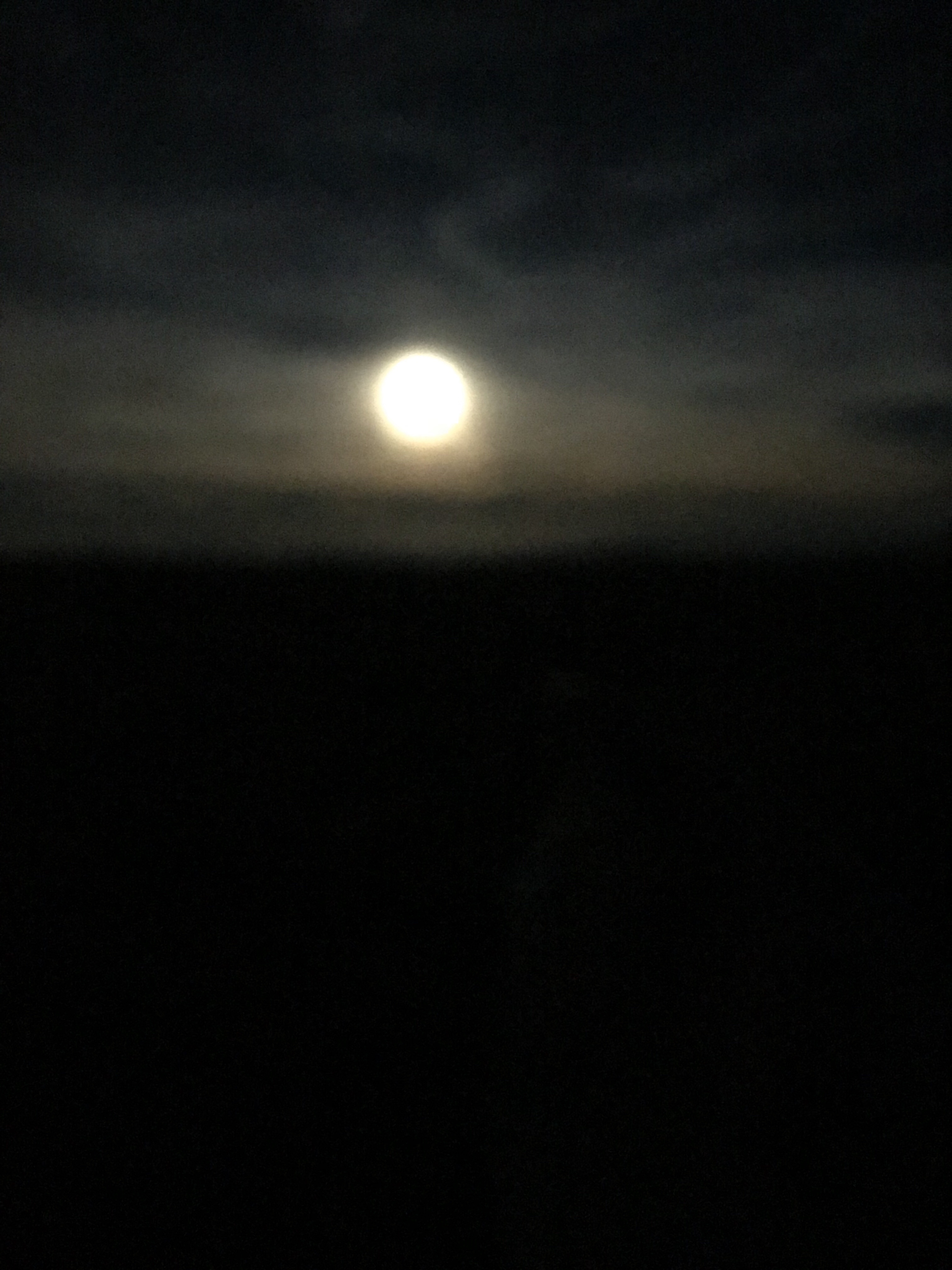 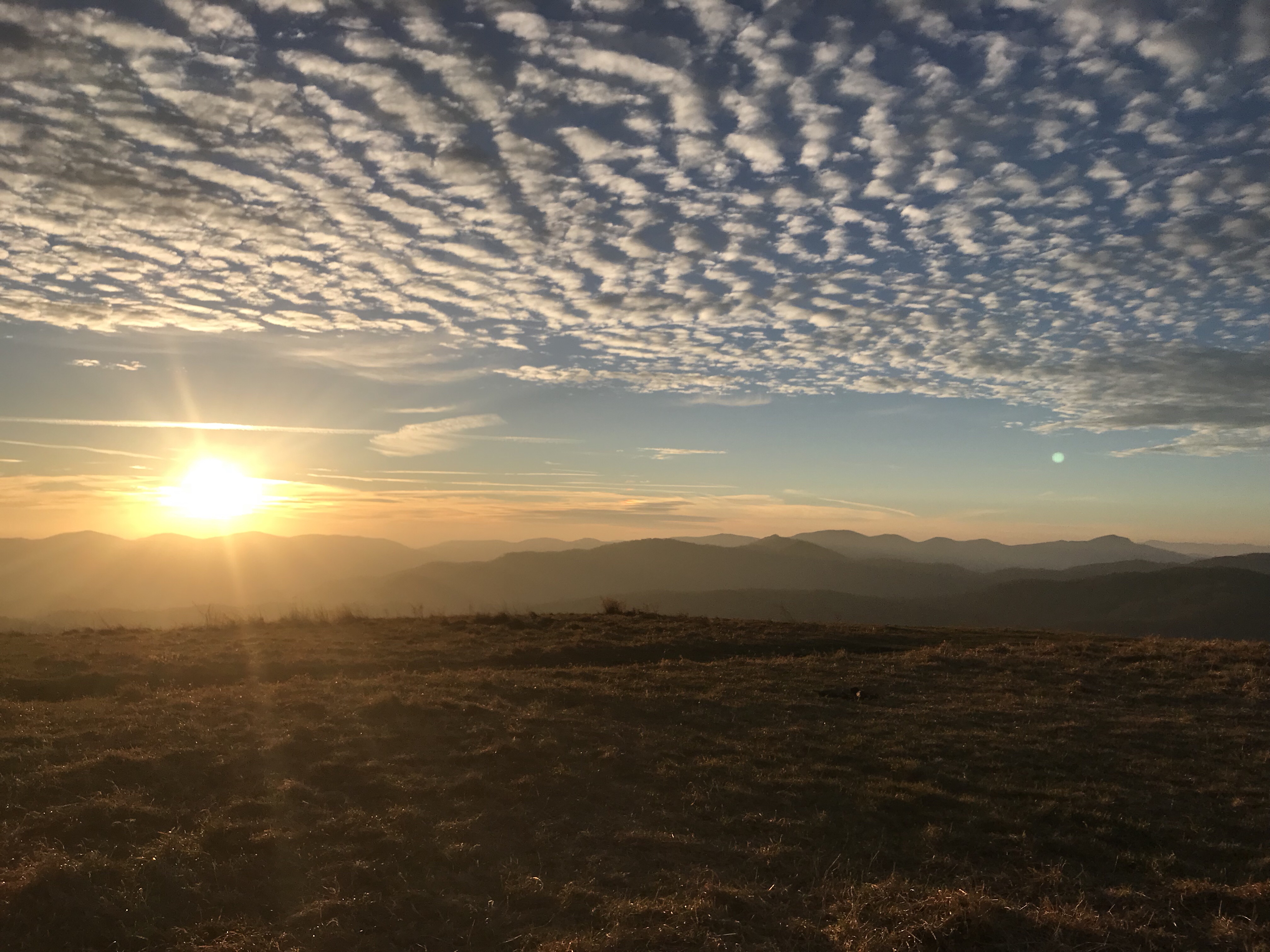 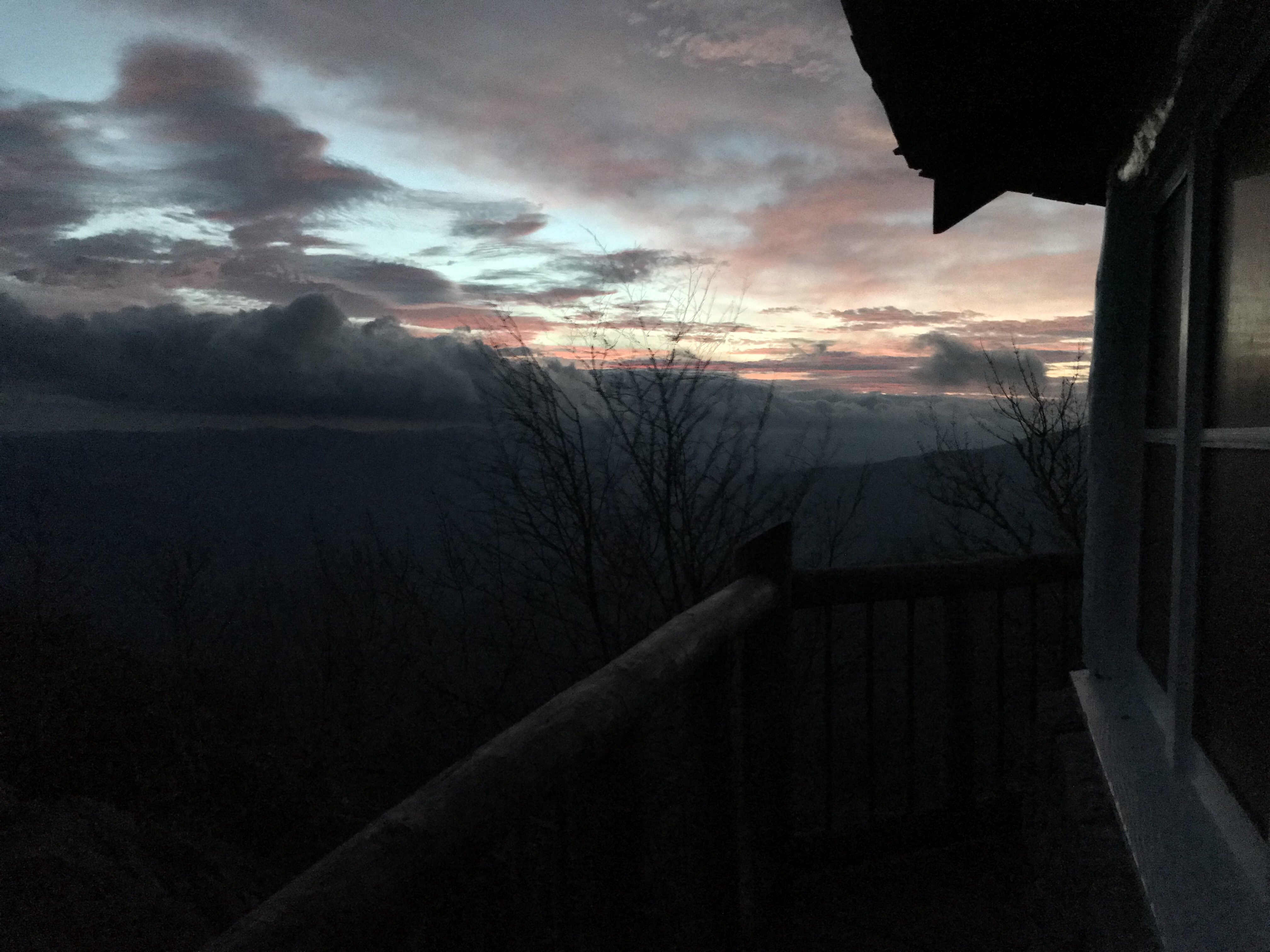 The lookout tower, for the record, was spectacular. In high spirits, we began our first full day in the Smokies – the much-anticipated Smokies! – only to be pushed into the Tricorner Knob Shelter after 10.6 miles of frigid ice rain. Trembling, we failed to build a fire with wet wood and that was the first time I was truly terrified. Shivering, shaking. Laughing hysterically because what is the other choice? Holding back tears as I shoved my feet into frozen boots at a shelter in the Smokies only to get to Newfound Gap and see an entire forest of trees coated with ice like something out of “Fantasia.” Falling asleep in every possible article of clothing, wrapped in my emergency blanket that shrieked with every movement, waking up to bone-chilling cold, terrifying and constant, that melted into a barely there ache as we frolicked through a snowstorm, grinding out 14 miles during winter storm Benji. 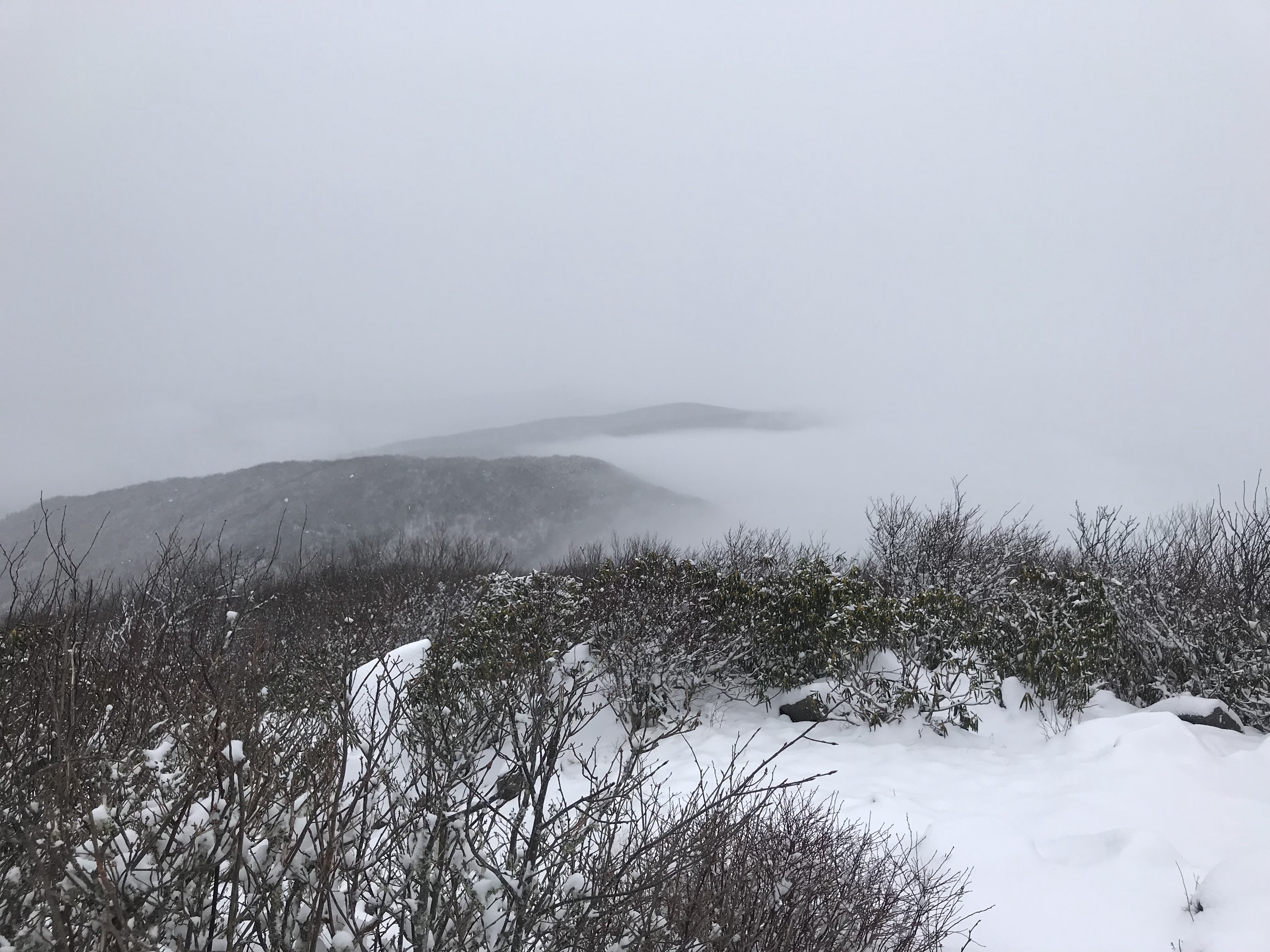 A casual jaunt during winter storm Benji, the jerk. 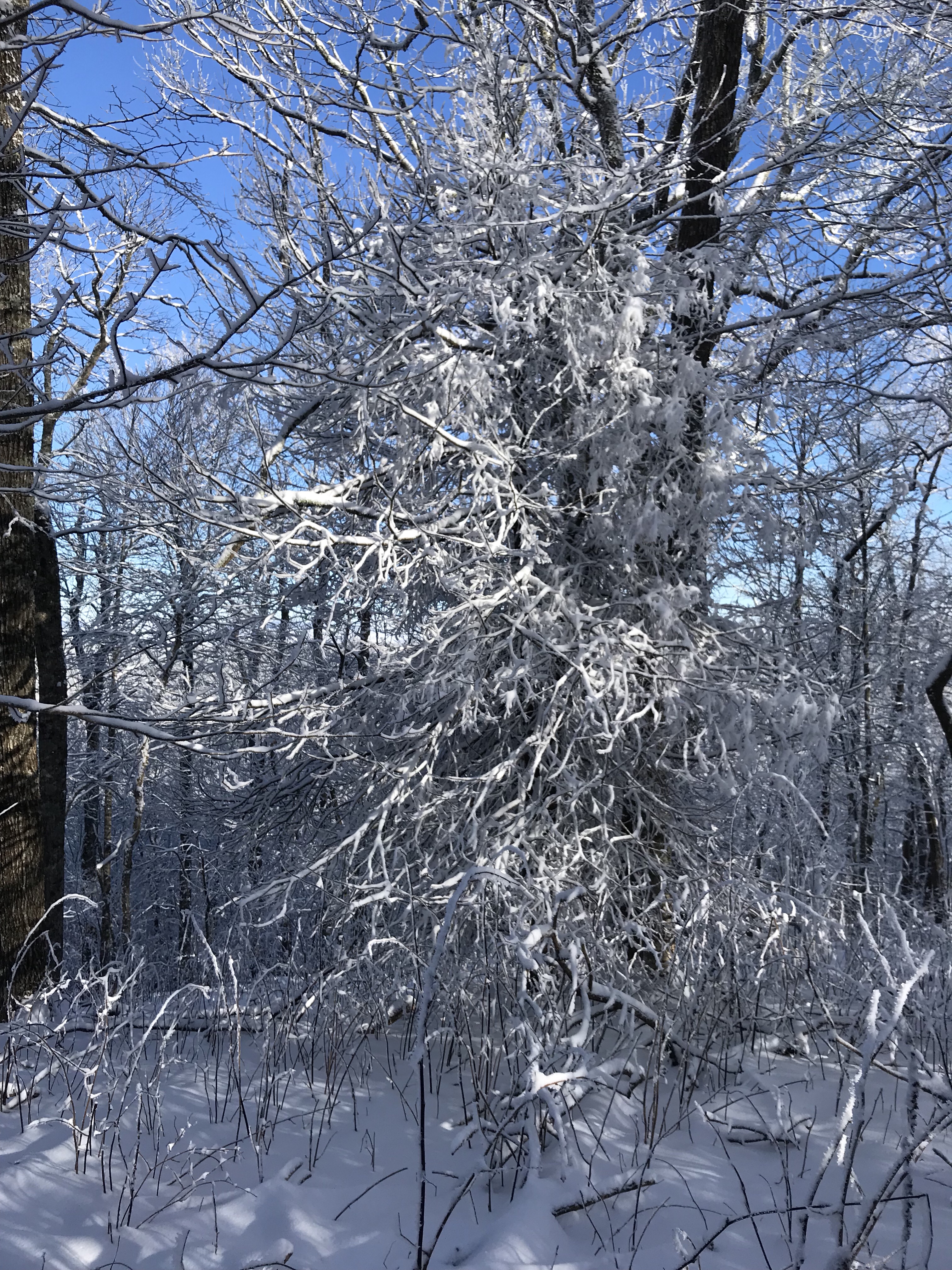 The joy of meeting new people; the sadness of a group disbanding; the sinking realization that we would not, as anticipated, all summit together.

Every town we entered was the best town I’d ever seen: Hampton, Roan Mountain, Irwin, Hot Springs, Gatlinburg, Franklin, Hiawassee. Let no one think I did not stop at any and every opportunity. Morale was low; being indoors brought it up. The happiness of pulling up to a hostel coupled with the guiltiness of sleeping inside again: Am I roughing it enough? Shouldn’t I be suffering more? I did not come out here to be inside… but I did not come out here to be miserable: A constant internal struggle. The only way to continue was to block any and all memories of a previous life with previous goals. The only reality had to be the rest of the Appalachian Trail. 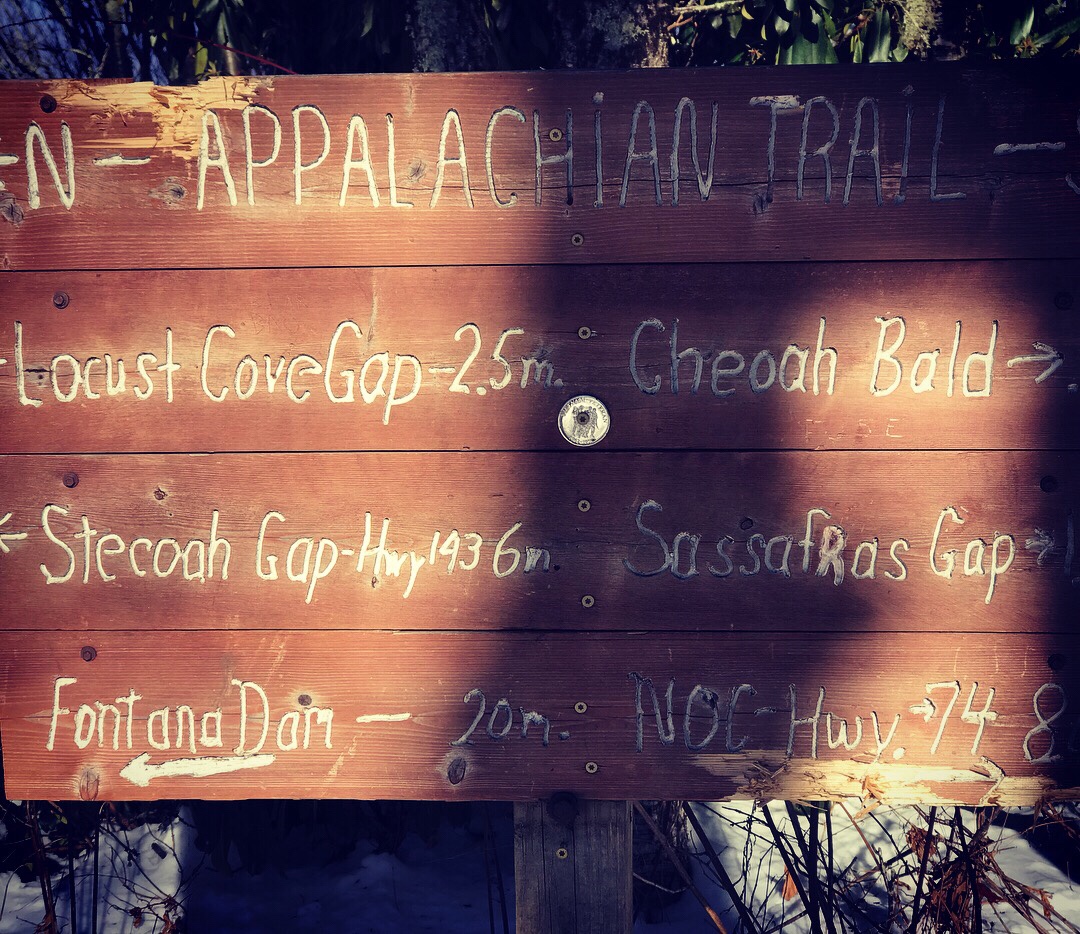 The snow had stopped falling, but had gone absolutely nowhere. I had never heard the term postholing before, yet was quickly becoming acquainted with the practice. The extra effort of hiking through snow that was frequently knee deep was physically and mentally draining; the rare spots of leaf-covered trail were glorious reunions with an old friend who we’d taken for granted for far too long. 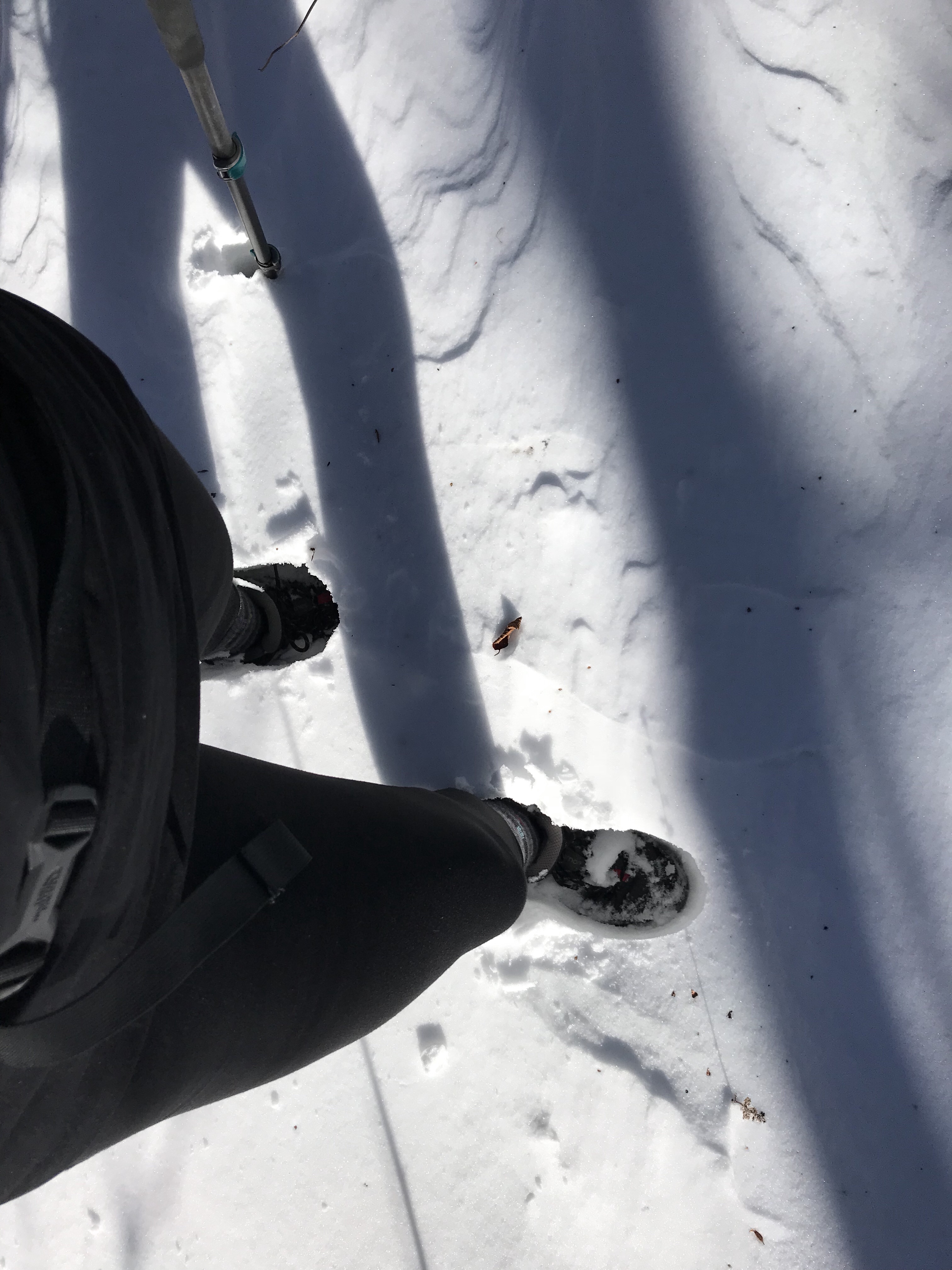 A physical and mental breakdown heading south from the NOC: It was too cold, too steep, and too far. My hiking partner’s shock: After all, I was supposed to be the happy one. But after 2,000 miles, it’s anyone’s game. The views were repetitive, the wind was relentless, the goal seemed ridiculous. Friends back home had begun posting pictures of holiday parties and sequined dresses.

The miles, somehow, reduced to a handful, and the snow slowly but surely melted away. Georgia. The last few days were warm, and after nearly a month of layering all my clothing, I finished the hike in shorts. Emotions were running high: What now? Can you believe this? I’m still cold! What are you going to eat when you get home? I have to go Christmas shopping! Frissons of nervous excitement about the fact that in two days I was going to be running around downtown Manhattan, popping from store to store, an elf on a mission. An undercurrent of sadness: We may never cross paths again. We ran up Blood Mountain in less than an hour, elated by everything: We’re almost fucking done. I felt like a teenager, but worse. Every emotion happening in my head at the same exact time. Yelling at the trail: I hate you! I love you!

The last mile of the trail was, in true trail fashion, a hot mess. Shuttles were early, family members lost, and – surprise, surprise – it started raining. I’d envisioned myself slowly smoking my last cigarette next to the famous bronze-green sign, tears valiantly streaming down my face, a sigh of unadulterated accomplishment. The reality was that my cigarette was getting wet, and I cried less from the joy of finishing than because I was anxious that my shuttle had been waiting four hours. We barely snapped a picture. The trail provides. 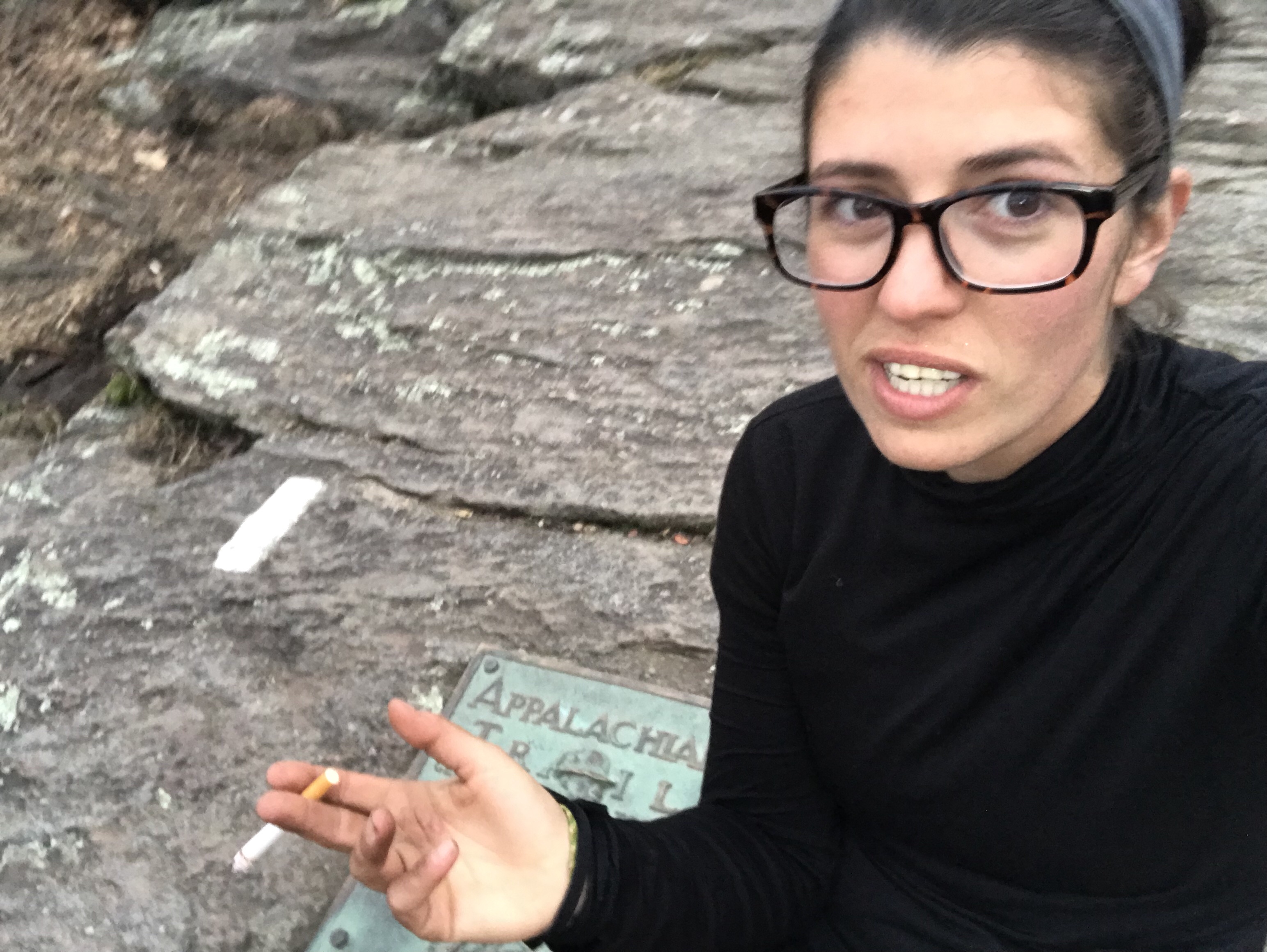 I sat at the bar of the restaurant in the Sheraton and had a bacon cheeseburger for my last/first meal. No one around me had just finished hiking the Appalachian Trail, nor did they care. The news was on, my beer was cold, and I didn’t know how to feel.

Six weeks later, I still don’t. I won’t attempt to crystallize six months into the last paragraph of a blog; however, it’s very difficult to hike for half a year and not come to some sort of realization about yourself and the life you want to have. The easy way out would be to compartmentalize the experience, find a job, and peruse my pictures, remembering this time I did this cool thing. After everything, though, I don’t believe that would be an honest reaction to my experience. The honest reaction – and this is gonna get a little emo – is that I felt more like myself while struggling through knee-deep snow, making lewd jokes to improve morale, chain smoking to reduce boredom, and living day-to-day in strange and often unpleasant conditions.

So what now? I’ve spent the last six weeks moping around, texting my trail friends ad nauseam, going on day hikes, and plotting ways to keep on keeping on. Purchasing airplane tickets generally works. For now, let us drink to the perils of having a penchant for peripatetic self-discovery! 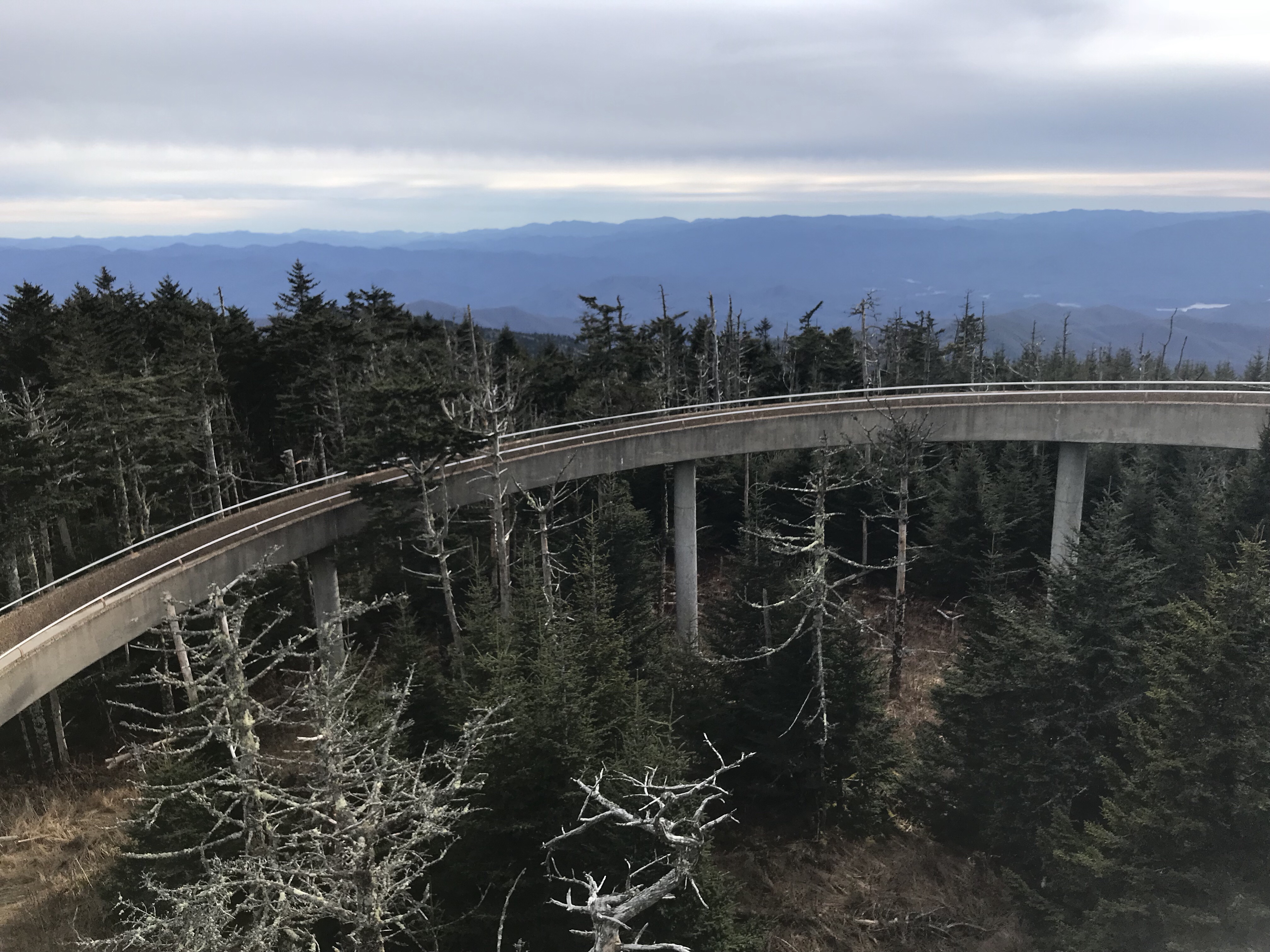 Salutations! My name is Lily, and I hiked the AT from July 1st to December 19th of 2017. I'm currently back in my home state of New York, freezing to death and plotting future expeditions!