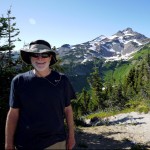 Leaving home in less than 3 weeks which means after 14 months of planning and preparatory activity it is almost time for the main event! Last year did some get ready backpack trips, one of which was with my brother. We backpacked the first week in May, 40 miles or so in Shenandoah National Park. It was the longest backpacking trip brother Paul had ever done. Just prior to the hike his wife told me “David, please stay close to your brother and keep your eye on him. He is like you know kinda old and should not be left alone in the woods.”

I tried to do as Susie asked but the very first night we ended up separated by a few miles.  I ended up at a shelter while Paul set up camp a couple miles further on in a clearing near the trail.  As there was no one else around to talk to he went to bed right after hanging his food bag.

Just before falling asleep he spotted a snickers bar but was too tired to hang it or eat it and was soon snoring away. Around midnight he was awaken by snorting nearby his tent and next thing he knew felt a forehead nudging him. The nudging quickly accelerated to he and his sleeping bag being shoved around. Realizing it must be a bear Paul grabbed his cell phone, found the dog bark signal and turned it on full blast. The bear then went galloping off but there was no sleep for brother the rest of the night. 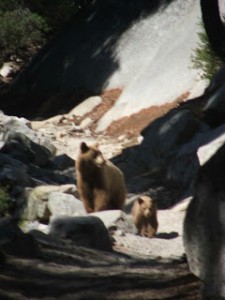 That turned out to be a good thing as he packed up his campsite long before dawn. Not much later after doing so a couple of forest service trucks came barrelling down through the fog over the same spot where his tent had been set up as he had done so on a forest road. Caught up with Paul early the next morning and after hearing his story realized that if something bad had happened like him getting eaten or run over by a truck his wife would have been very disappointed that I did not do as she requested!

The upcoming months on the AT I figure should be a good chance to fully redeem myself in Susie’s eyes as plan to make sure the two of us are not too far apart (at least most nights) the whole trip!

Hi Dave here from my home for the past 39 years, the windward side of O`ahu. The temperature outside right now is something like 75 with trades blowing from the NE while I look out our front room window at Mokoli`i island in Kaneohe Bay. So why in the heck would I be planning to leave here in a few short weeks to spend who knows how long hiking in the cold and rain and possibly snow? Besides the obvious that am kinda crazy, the main reason is because my big brother who lives out near the trail in Virginia is going and he wants me to go with him. Other reasons are that have been an avid hiker and backpacker for several years now and have always wanted to try and do a multi-month hike and now have the time to do so. We are starting March 16 from Damascus and after reach Maine plan to restart at Springer and head back north. Am so looking forward to meeting some of you on the trail, reading various blogs and making entries on this one. Alright that is all for now!