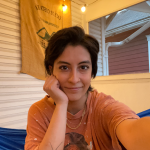 Reflections, a Trail Family, and a Fire Tower

A Turning Point and a Point of Reflection

The icy night past the border crossing into North Carolina proved to be fateful. It brought me to the friends with whom I would watch sunrises atop quiet balds, traverse the ridges of the Great Smokie Mountains, snake the NC/TN border, and share the ups and downs of the trail.

It was the hike down to Winding Stair where I got to know Gromit, named by his ability to throw back entire blocks of cheese as a quick trail-side snack. I was struck by his questions about my life outside the trail. Partly because I hadn’t hiked much with other hikers during the day, and partly because I was getting used to separating “real life” and “trail life”. There is a simple comfort in the anonymity one steps into out here. I am so used to being defined by work that it feels refreshing to only be known as how you show up on trail.

Frosty said it best on the Wesser Bald Tower: that it feels like the first week of college again, where the barriers to meeting new people and making friends are lowered by the collective shock of a new reality. I felt that the evening Sonic Boom, Bumblebee (formerly known as Hazmat) and I sat outside the Fontana Lodge and talked about the jobs we left or put on pause. We talked about the Great Resignation and being a part of a generation navigating student debt, climate change, and growing social inequity. Some folks are out here for that very reason— disillusioned by their industry or doubtful of the impact of the career path they’re on. Some are seeking inspiration or restoring energy for their work to continue. Others are out here for reasons completely separate from work. For one it’s the need to challenge oneself outside of a life they’ve grown too comfortable with. Another, it’s the opportunity to heal from the challenges life has presented.

We hold multiple reasons and realities for why we are on trail. There is a diversity in reason and resources amongst thru-hikers. I explained that to my Dad one morning, FaceTiming him the view. He asked about my observations of who is on the trail and why. There is much less however, and unsurprising, a diversity in race and ethnicity. I was reminded of this by a woman at a shelter whose jaw dropped in shock as she loudly exclaimed how she was certain I had a brother on trial and looked exactly like the man who had just left the shelter— a hiker I was familiar with as he was one of few hikers with a brown complexion I had seen.

Hummingbird and I looked at each other. “I’m not pushing on. Want to just pitch our tents here?” Coming out of the NOC was grueling. It was so steep that standing to rest overstretched my calves. Lt. Dangle joined us shortly after. “Hey, Dangle! How was your day?”

“It’s a long story. You’d better wait for the others to arrive.”

Bumblebee and I sat on the ground, attention turned to the exhausted Australian who had hiked in with Gromit and Gromit’s sister, Hobbit.

“So there I was. Saw the trekking poles but where’s the hiker?”

Australia regaled us with a tale of rescue. A participant in a charity event to raise money for a medical condition had fallen off a steep ridge down into a ravine. Our storyteller, a former French Legion Medic and adventurer of epic proportions in Australia had helped organize the extraction and transport of the badly injured hiker. Gromit, Hobbit, and Lieutenant Dangle helped as well and their support proved to be critical in getting them out in a timely manner. The hours and hours of assistance landed our friends in a hotel for the night and the next morning, at the closing ceremony for the charity event where they were thanked. The event coordinators proudly displayed their trail names on a PowerPoint slide, “Gromit, Hobbit, Australia, and Lieutenant Dingleberry”. Thus brought together these characters and simultaneously renamed Lt. Dangle in an unforgettably hilarious way.

So then there I was. Sonic Boom, Hummingbird, Lt. Dingleberry, Bumblebee, Australia (who would later be re-named High Route), Hobbit, Gromit, and I lined up to take the first shot of a game of mini golf at the Fontana Lodge. Still somewhat strangers, yet celebrating Hummingbird’s 25th birthday as if we were all longtime friends. We compared plans and mileage goals for the Smokies. It felt good to turn off my brain, put the spreadsheet down, and just be present with pals.

The climb up into the Smokies from Fontana Dam was filled with excitement and apprehension. The Great Smoky Mountains felt like the final checkpoint in the beginning trials of the Appalachian Trail. If you can make it through the Smokies, you’ve got this. The words of the Mountain Crossings employee rang through my head.

I saw on my AWOL guide that once we took on the ridgeline, there would be an old observation or fire tower close off the trail. Perfect spot for lunch. I took off my pack at the base of the tall, thin tower. “Heyyyy it’s like realllyyy sketch up there” a young hiker called out to me. “Like, even I was scared. So just warning you if you decide to try and go up there.” A fair warning. But I’m stubborn with a challenge, and even more stubborn when a guy warns me of something being too scary. “Yeah, I’m a climber so… I’m okay with heights.”

Right before I started, Bumblebee caught up to me. He threw off his pack and followed up after. The roaring wind on the gaping stairs added an element of spice but I felt secure. A little more than halfway up, Bumblebee stated, “yeah I’m good from here” and didn’t follow me into the creaky wooden shack on top. The loose floorboards squeaked and shifted under my feet. The wind shook the entire tower. Sketch for sure, but sick view. Back at the base Bumblebee and I ate lunch. I looked up at the tower and felt proud of myself for remaining so calm at the top. Then a memory popped into my mind.

It was August of 2020. And I was sitting alone, in the darkening woods at the base of a rock wall in Kentucky. Above me, my friends’ headlamps disappeared. I had been too scared to go up with them. So I sat there and waited.

It was a chill multipitch called Caver’s Route that many climbers soloed, that is, climbed without protection or ropes. Despite the easy climbing, I was mentally and emotionally in no condition to be navigating the risk of climbing without a rope. The spring and summer of 2020 had been tumultuous, to say the least. But I’ll never forget the feeling of sitting on a rock alone in the woods. You’re alone because you couldn’t do what your guy friends can do. You’re not brave enough or strong enough or tough enough.

I wasn’t sure why, at that moment, staring up at the fire tower brought me back to the evening looking up at Caver’s Route. But that afternoon as I frolicked across the high elevation meadows of the Smokies with a growing sense of weightless freedom, I became aware of how different my mentality was in this space compared to rock climbing. Rock climbing had been a college hobby turned temporary lifestyle when my inability to get a job after graduating during lockdown sent me to live in a climbing campground in West Virginia for a couple months. Climbing is beautiful and has brought me precious moments with lifelong friends in inexplicably special places. But climbing is also complex. And has for the most part, been fueled by my stubborn and ego-driven attempts to not be defined by fear. To prove that I can do what those around me can do despite moments of intense fight or flight response, 60 feet in the air, about to whip down on a thin rope. In a year defined by survival mode where everything seemed to implode, I was being hard on myself— on my body—  for not allowing me to fearlessly dangle from a cliff for fun.

I thought about what had fueled me to climb. I had to prove I could climb up there. I thought about what fueled me up the fire tower. I had to prove that I could go up there. I thought about what fueled this thru hike. The thought arrived and seemed to lift the weight of my pack off my shoulders. I didn’t feel like I was trying to prove anything to myself or anyone around me. I wasn’t being driven to hike far or fast by the deep need to prove that I can or I’m not scared or to force myself into the perceived standards of bravery of those around me. I was hiking because it made me feel good. Because it felt like healing even when the trail broke me down a little first.

I hiked hard and fast. I felt a new posture click into place. I hiked with a straighter back taking smaller, lighter steps. My limp was almost completely gone and downhills were less intimidating. It felt good to move in a powerful and efficient way. The sky was impossibly blue and I passed through a new landscape of wildflowers and wiry alpine shrubs.

What is up! My name is Callia and I'm thru hiking the AT NOBO '22. Follow my journey as I ~blog~ about my adventures and the cast of characters I'll meet; capture a visual pokedex of Appalachian views, critters, and shrooms; and probably learn some things.