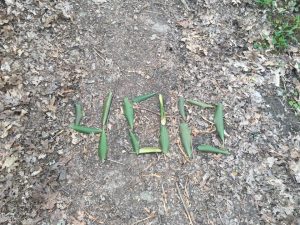 The next morning I got to eat what Frisbee called “the best breakfast on the trail”.  It was homemade southern cooking that consisted of biscuits and gravy, pancakes, egg casserole, pastries, cinnamon roles, meats, and lots of fruit.  I was really full after trying a sample of everything and hiking afterwards proved difficult.  To this point the weather has mostly been cool and today it was hot and humid and the walking was hard.  After just a bit I ran into some boys who were feeling the breakfast and heat too and we hung out for a bit.  Later on there was a really cool waterfall a little off the trail that I checked out.  The trail then followed Elk River for a bit and someone had put together rododendrum leaves as a 400 mile marker.  The boys appeared again and said there was another waterfall off an unmarked trail there so I checked it out as well.  As evening rolled around I made it to a shelter with 3 tiers and even though I hadn’t gone that far there were others in the same boat.  I had all my stuff cooked and hung and then the thunderstorm happened and it came down hard.  There was even hail and it made me glad I was in a shelter that night
Sleepy time 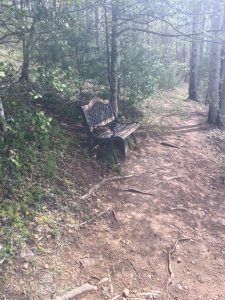 Well, I was happy, I was in the shelter till about 4 am (warning this might be a rant).  About half of the boys decided they were going to push to town and wake up early.  I awoke to the smell of cigarettes and someone’s phone alarm going off.  Typically early risers pack quietly and people don’t smoke inside the shelters.  I heard crumpling of things and talking for about an hour.  One kid was complaining about not wanting to use the facility’s (a hole) in the dark because it was “spooky”.   Then they all walked into the thunderstorm.  I slept about another hour and then sleepily packed up and talked to the folk who were still around about the boys.  It had stopped raining and was actually looking pretty nice.  In the morning we ran into a guy from Maine who had come down to meet some coworkers on the trail and he had fruit and Doritos.  When I left that I found a park bench that was randomly placed in the woods (it had a view).  I was going slow and decided to call it quits early and chill the afternoon out of the heat.  It was very peaceful and a few others like Lassy showed up later so I wasn’t alone.
Time to swim 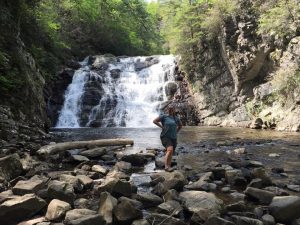 The next day I planned to end my day at a waterfall.  I felt rejuvenated from the long sleep and I strolled for quite some time taking a few stops to chug water because my previous laziness could of been caused by dehydration.  Towards late afternoon I got to Laurel falls.  It was magnificent and kind of reminded me of a waterfall that I’ve been to before.  The trail reminded me of the cascades and it had about the same popularity.  It was cool out but I decided it was time to be not as modest and went in for a quick swim.  It was cold but I felt a tad cleaner afterwards.  Afterwards I strolled for a few minutes till I found a campsite close to the water and settled in for a nice evening.
Spaghetti in a castle 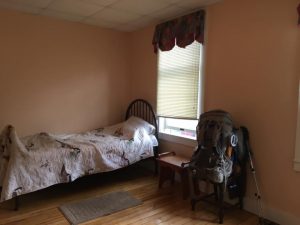 In the morning I found I had made one mistake.  I always leave my trekking poles under the rain fly on the ground and apparently I should not do that anymore.  My loops were chewed and gone courtesy of some not so friendly mouse who liked my sweat. After some disappointment I got moving and went up and down pond flats which I still don’t understand the point of.  It was a 2000 foot climb up and down and on top there was nothing.  After that I stuck out my arm with my thumb up and tried to get into Hampton TN.  There was a couple there who were trying as well but in the end I believe I got the ride.  A friendly couple in a pickup truck let us jump out back and drove us to Brown’s grocery which also hosts a hostel.  The hostel is in a castle building and I was going to do a bunk until the guy pointed out the private room was only 25 dollars.  That deal couldn’t be beat so I spoiled myself.  The guy who worked there gave us a lift to the diner in town where I enjoyed some fried okra and lots of sweat tea.  I grocery shopped at dollar general and walked back to the hostel.  Then I headed to Brown’s grocery where I picked up some ingredients to make spaghetti with chicken.  It turned out pretty well and it was super exciting cooking real food again.  An Australian couple made delicious cookies or what Gently made me call biscuits.  Then we watched the vcr of the jungle book and I’ve had that music stuck in my head since.
Muggy
We were driven back to the trail head and it immediately started raining.  Oh, I forgot to mention that I lost my rain cover so someone had given me a poncho but it didn’t go over my whole pack.  After struggling with that it stopped and became extremely muggy and the sweat was rolling into my eyes making them sting.  I took a break to eat my spaghetti leftovers and then collected enough water to last me till tomorrow and headed to the packed shelter.  There was a view there and some interesting folks who stayed up way past hiker midnight (9 pm) and woke up at the crack of dawn.
The grim truth
I was one of the last to leave camp the next day.  I felt pretty good (I usually do in the morning).  Then after checking the guide and the time I started feeling down.   The last few weeks have been difficult for me mentally.  People pass me a lot, I still am not making as many miles as I should, I’ve been lonely, and my feet have been killing me.  The terrain is some of the easiest we have walked on yet but thinking of a tiny hill when I’ve climbed mountains now makes me tired. I looked up feet soreness and one guy suggested propping ones feet on their backpack every two miles for a few minutes. That strategy seemed to work and whenever walking became unpleasant I would do that.  Somehow I was able to walk 14 miles that day and the thunderstorm that had been threatening since noon stayed away until my tent was set up and I was inside of it, Which is extremely lucky!  I have learned how to cook in my vestibule so I made some potatoes and added my new favorite thing – garlic salt.  I went to bed listening to the rain bounce off my tent happy to be dry and warm.
Chill day
The next day I had a similar rest policy while hiking and made it to the shelter in good time even with a little rain.  I could of gone almost all the way to Damascus but I ended up making a hot lunch (I like knorr rice sides) and boiling some water for some section hikers who’d forgotten their stove.  It was 4 so I decided I’d walk an hour so the next day if have a little less and 50 minutes in I found a campsite.  I set up camp and got in my sleeping bag early since it was getter I  chilly again.
Into my home state
I booked it down to Damascus the next day. I passed the Virginia border sign and took a few selfies and maybe made one other stop. A few miles later I was walking through town. My mom had booked a place at the hikers Inn so I showered and awaited her arrival. She’s here now and we have a lot of stuff to do, so till next time!
< Previous Post
Next Post >