Save The Best For Last…

The Katahdin Streams Campground was extremely busy on September 6th. I found myself checking in with the ranger at 7 a.m. She assigned me with number 454…. 454! I checked in at Harper’s Ferry at 804 and I was suddenly 454. Where did all of the others ahead of me go? 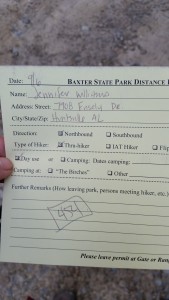 I put my pack in the ranger station and selected a day pack. This would be my very first time slack packing. I was always against it because my pack was my home and went everywhere I went. I really didn’t even know how to act with a day pack anymore. I filled it with snacks, a few sentimental items, my water filter, and a gatorade bottle. I put it on and my back felt naked. I took a deep breath and made my way back towards the white blazes. The sun was bright and beautiful. I was shaking. I felt nauseous from either excitement or fear. It was 7:30 by the time Durpadur and I started on our last steps of an incredible journey. 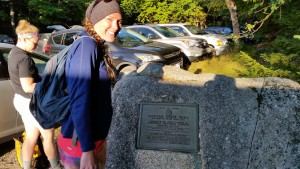 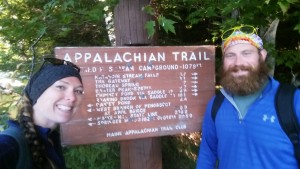 We admired how clear the water was. The terrain was soft on our feet. We cleared the first mile without even breaking a sweat or having to catch out breath. 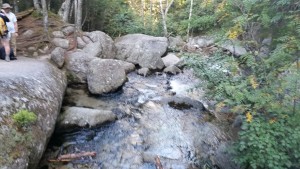 The 2nd mile greeted us with an amazing waterfall. The elevation gain shifted quickly. Day hikers started to make us pass them. We stopped for water and listened to everyone huff and puff as they walked by. 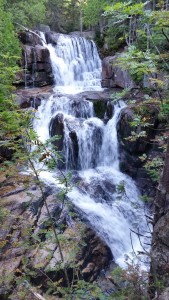 The boulder hopping started. For the first time in nearly 2,200 miles, I was flying across boulders since I didn’t have a 30lb pack throwing off my balance. I put away my trekking poles and pretended I was a monkey. I was a day and section hiker for such a long time, but I forgot what it was like to feel as light as a feather. I forgot what it was like to be able to squeeze through tight spots without my home getting in the way and snagged on nature. 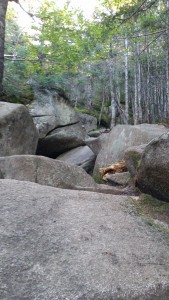 I heard nervous laughter. I saw people begin to freeze up. I froze up when I saw what was ahead of me. Once we got to Maine,  we started referring to some sections as “the vertical Mahoosuc Notch”…. this was definitely one that would fall into this category. I saw a day hiker turn around out of fear. I had to sit down. I had to breathe. I couldn’t back out. A boy and his father sat down near me to take care of a blister. We engaged in conversation and I found out that this boy was about to turn 12 and begged his father to take him on this mountain for his birthday. This made me so proud that I had tears in my eyes. This may be the reason I got a sudden adrenaline rush. I decided it was now or never, set my fear of heights aside, and started to climb the hardest part of this mountain. 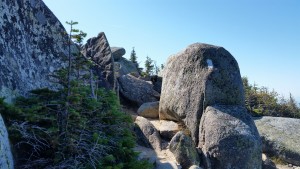 There were so many hikers climbing the mountain that it was causing an inch worm motion for everyone. We had to break often to not get caught in a traffic jam which would cause me to look below me. Anytime I would see a safe spot that wouldn’t scare me, we would stop. 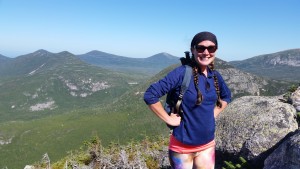 Two other thru-hikers stopped with us at one point. One of them was a brand new hiker starting his southbound trek. We shared pointers with him as he seemed like a nervous wreck. I really wanted to trail-name him Nervous Nelly, but didn’t want to offend him…. especially since I was battling nerves of my own. We continued on. 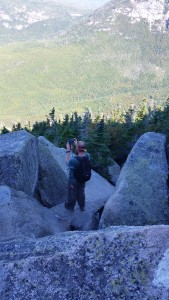 It kept going and going. It was a never ending rock climbing stretch. Despite how afraid I was, I couldn’t back out with less than 2 miles to go. I made it this far and had made leaps and bounds in dealing with my fear of heights. 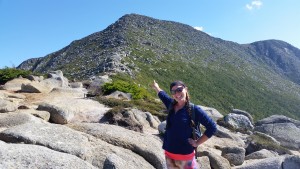 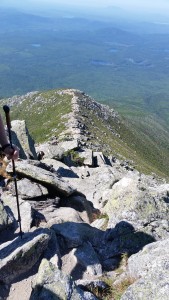 I never researched or read up on what to expect while climbing this mountain. I wanted it to be a mystery. I knew it wouldn’t be easy. Of course, there was a false summit. 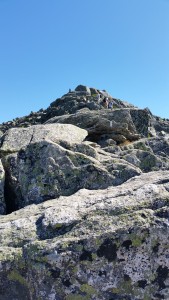 Once we reached the false summit, a whole new world opened it. I saw the final stretch in the distance which made every hiker look like tiny ants. 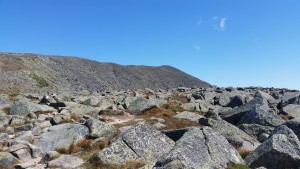 I can’t exactly describe what I was feeling in that last mile. I saw the boy who was hiking for his birthday. I saw what appeared to be 100 people on the summit. I started weeping. I kept turning around to make sure Durpadur was still behind me. I saw Nervous Nelly the southbounder way behind me. The night before, Durpadur and I went through pictures of our early days and all of those memories kept flashing in front of me. I heard conversations I had with others throughout my hike in my head. I saw miles and miles of beauty all around me, but everything seemed so fuzzy and blurry. 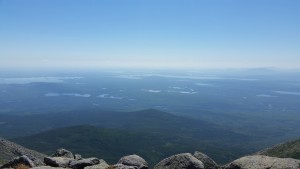 I saw my last white blaze…. 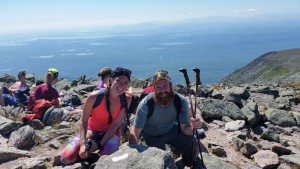 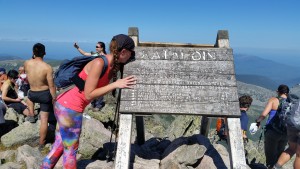 I was blinded by tears, but finally…. finally…. I summitted. I summitted and made my dream, my obsession for many years, come true. 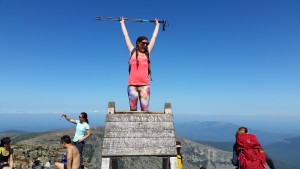 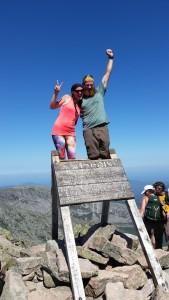 Back in Georgia,  2 sections hikers we became friends with, Ricky and Nolan, found a wind up radio in a shelter. They placed the burden of lugging this stupid radio around on Durpadur and made him promise that it would make it to Maine. As many times as he wanted to ditch that damn radio, it made it from Springer Mountain shelter to Katahdin. 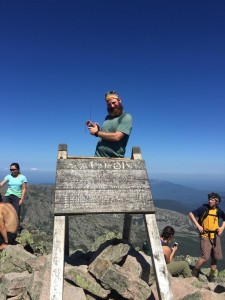 My son painted a rock to make it look like a lady bug and gave it to me for Mother’s Day back in North Carolina. It meant the world to me. Hikers joke a lot about putting rocks in each other’s packs,  but I actually really did carry a rock in my pack all the way to Katahdin. 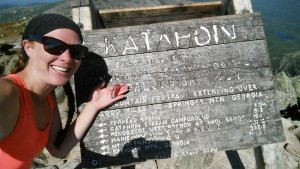 I have a friend who is in remission from testicular cancer at home. He gave me a snake puppet and I promised it would go to Katahdin with me… the green cobra made it to Katahdin. 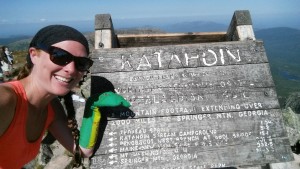 We found a quiet spot and just sat for a while. We really didn’t say much. I had no appetite. Was this real? Did I really just do this? What am I supposed to do now?

We decided to take a different route back down the mountain. We weren’t chasing white blazes anymore. We ended up on the Cathedral trail and it wasn’t until we were far enough in that we were committed to it that we found out that it is only recommended to take up, not down. Oops…. it was rough and I stayed on my butt the entire time. 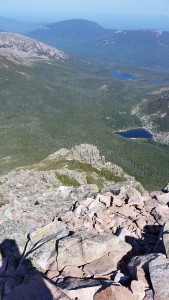 I wasn’t scared, though. Sure, there were parts that Durpadur had to help me down, but at that point I felt like I could do anything. After this journey,  I can do anything. We descended what felt like 3,000 feet in a mile. It was seriously straight down.

We finally made it to level land. And of course, after everything we had been through terrain wise, it was a wooden plank that took me down! I just climbed one of the hardest mountains in the country and a wooden plank got the best of me! I fell flat on my face, busted my chin, and got tangled up in my trekking poles. Go figure. It was only suiting, I guess.

That day is one I will never forget. The entire journey will never be forgotten. I’m not that little girl who is afraid of the dark and heights anymore. I’m a strong person who can battle weather elements, handle things that go bump in the night, and walk all the way from Georgia to Maine.

Did I get over my hiking bug? Absolutely not! This is only the beginning. While I will keep my thru-hikes way shorter for a long time, I am already planning 2 big hikes for next year. The John Muir Trail will definitely happen next August or September. I am torn between the Benton Mackaye and the Vermont Long Trail since I’ve already done half of it now. I will definitely entertain the idea of the Pacific Crest Trail, but I’ll let the publicity of the media calm down a little bit on that one. For now, I will write, give advice, and continue to section hike the Appalachian Trail in my free time. You may step foot on the same trail twice, but you never hike the exact same trail twice. It’s always different. 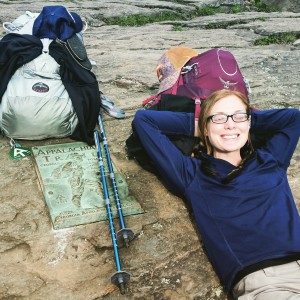