Saying goodbye to the trail

I’ve been putting off writing this post. This is the post where I tell everyone what it was like to finish the Appalachian Trail. Not to spoil the ending, but- on July 26, 2016, Limbo and I climbed Katahdin. That was…17 days ago? I’m already remembering how much faster the “real world” moves than the trail.

At the beginning of the hike, I rarely thought about Katahdin. It seemed too far away. At Harper’s Ferry, it started to become more possible that Katahdin might actually exist. In New England, I sometimes would tear up just thinking about the end. In southern Maine, I spitefully wished for the end. In the last few days of the hike, I felt peace bordering on denial.

The last few days of our hike were some of the best on the entire trail. We had insanely beautiful weather for the entire 100 mile wilderness. We camped right on Jo-Mary Lake and spent the evening on a large rock in the water, watching the entire sunset. We enjoyed perfectly ripe wild blueberries on the Rainbow Ledges with a view of Katahdin. We sat in a stream and got to watch two minks swimming and running around the shore. We took a nap just feet from Big Niagara Falls.

The day we summited was grey and cool. We woke early to dump our unnecessary gear at the ranger station but wore our ULA packs. It just didn’t seem right not to wear the packs that were on our backs for more than 2,000 miles. As we climbed and began to near tree line, the clouds swirled and parted to reveal breathtaking views of the valley and surrounding ridges. We climbed further until we were in the clouds and the wind picked up. It was quite foggy and we couldn’t see the sign until we were almost on top of it. And then, we were there. The moment I had so many mixed emotions about had arrived. Because of the weather, we had a few special moments totally alone on top. This was the greatest gift I could have asked for and I’m grateful for what most people would consider a less than perfect day to summit.

Our last goodbye to the trail was on our descent. We chose to take an alternative trail down, so when we reached the split we did something I learned from fellow hiker and Appalachian Trials writer Toast– we kissed the rock with the last white blaze we would pass.

We got a hitch from a helpful park employee. As we rode away from Katahdin in the bed of the pickup, Limbo pointed out that for the first time since February, our destination was no longer Katahdin. While the hike has almost always been about the journey and not the destination, the reality of an end point is inescapable. We spent almost five months on the trail working to get there, and it was a dream much before that. Now, everything we do takes us a little further away.

After leaving the trail, we rented a car and slowly made our way through Maine, New Hampshire, and Massachusetts. Our flight to Indiana departed from Boston, so we spent a couple days there. We walked the 2.5 mile Freedom Trail in Boston in full hiker gear and attire after dropping off the rental car. I enjoyed the funny looks we got, but mostly I just felt right at home with all my gear. Walking around Boston without our packs the following day just felt wrong. How could people tell we had just completed this totally life-changing event? Why doesn’t everyone just carry all their life essentials on their back all the time? 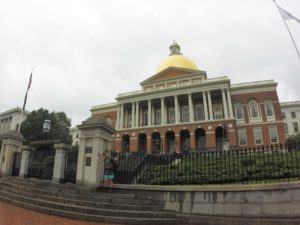 The trail taught me that I am a hiker. I was a hiker before the trail, but now I know I am a hiker, capable of more than I thought possible. I am already thinking about all the trails I want to do back home in Oregon, and plotting my purchase of Pacific Crest Trials so that I can begin thinking about a thru-hike of the PCT.

Our mantra on the trail was to “enjoy the walk”. I guess until we’re attempting to complete another long distance trail, “the walk” is just day to day life. In some ways that’s a pretty daunting challenge, but I think we’re up for it. Through hard times and good, we’re pretty good at walking now. So that’s what we’ll keep on doing. 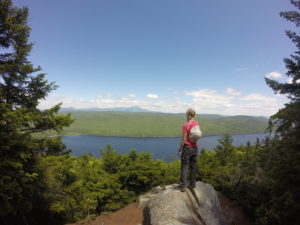 Taking in one of our first views of Katahdin 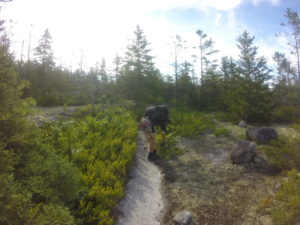 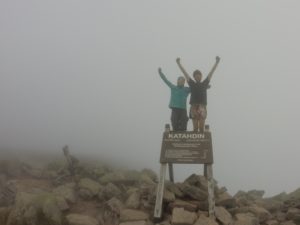