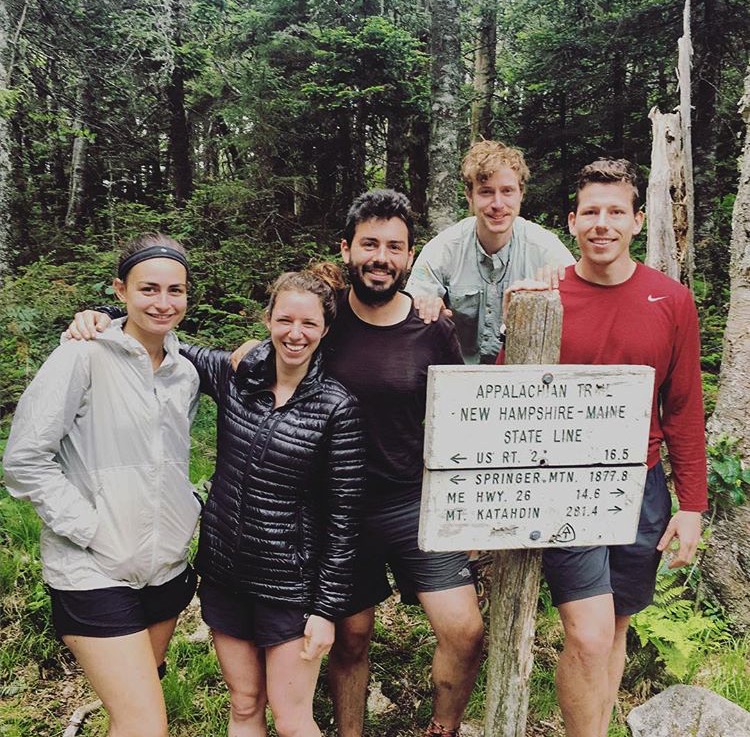 Just two days ago, we crossed our first state line! That’s right, we are officially in New Hampshire! Well, sort of. Actually, we missed Maine so much that we decided to come back. To clarify, our friend/ trail angel/ fellow thru-hiker/ trail maintainer, John (Zephyr), and his wife Patty have taken us in for a much-needed zero. We were picked up yesterday and taken back to their home in Maine where we showered and accompanied them to a family party. Everyone made us feel comfortable enough to not only show up sporting our crocs, but also to down a bunch of wine, red slaw dogs (it’s a Maine thing), and the best cake and chocolate covered strawberries I’ve ever tasted.

Clearly, I get excited when I enter a town. Let’s go back to the state line: We had waited 22 days for that moment and what I really mean by that is there was absolutely zero waiting involved. What we did over the course of those 22 days involved 100 miles without cellphone reception or connection to society (which I already wrote about in my previous post from Monson), a stop in Caratunk for a burger challenge and a hot tub, and an overnight in Rangeley for our first mail drop and a pizza pie for each of us hikers. I know, it doesn’t sound too rough. However, I think you’ll understand there has to be some sort of physical challenge resulting in caloric deficit when I tell you that I discovered the world’s best pizza and it’s in a town called Rangely, and the world’s best burger may be… everywhere in Maine that I’ve had a burger. After all, everything tastes better when you’re somewhere that stores their ingredients in a refrigerator and cooks their food in an oven (or deep fryer). Ugh, she’s ranting on about food and trail towns again.

Now that I’ve convinced you all that I may be a bit out of it, or at least my New Yorkers who are still hung up on my pizza comment, you’re probably wondering why I glorify the little things. It’s because without the little rewards, the pain would be all there was to talk about. The pain has found a home in my knees, the arches of my feet, and all over my scraped legs and black-fly-bitten ankles, elbows, and of course the unreachable spots on my back. The last few nights in the shelter, I was woken up by my throbbing knees and incredibly itchy skin. The worst part about it is that those are just the things that bother me during the night. If this happened during marathon training, for example, I would just take a recovery day or two or three, but that’s not an option out here. The closest I can get to something as simple as icing the pain is to put my whole leg in a cold stream, which is helpful, but I know after I emerge from the water, we’re going to keep walking. We have Vitamin I (ibuprofen) but I’m not trying to take that regularly.

Each day, I face climbs where I have to make the tough decision of whether I should power through the burning sensation in my legs and just get it over with, or whether I should take my time and stop for breaks. And then the mountain plays these games where I think I’m at the top and it winds up being a false peak. Or I’ll climb up only to find a steeper climb around the bend. The muscle pain is temporary, though. Believe it or not, it’s the downhills that are the most jarring. It’s the pain in my knees caused by the downhills that have kept me up at night.

It’s truly all worth it, though, and I say that because the pain hasn’t been emotional. It’s been extremely healing. I owe my mindfulness and contentment to the wildlife, as I would never be able to emotionally handle the physical pain if I weren’t in nature. Lupine, rhododendrons, and lady slippers are flowering and the colors are beautiful alongside all of the white and silver birch trees. The occasional black birches were a treat to come across, since cutting off a small branch to chew on was the closest we got to birch beer. Roots of other trees were exposed and provided a sort of stair case to either trip us or to help us move forward. Many of the summits are coated with rare alpines that didn’t block our view but only enhanced it. On the days where I packed dehydrated hummus and tortillas for lunch, I enjoyed foraging wood sorrel during the first half of the day and adding that to my wraps. Then there’s the potent scent of white pines that brought me back to my childhood vacations in Cape Cod. I felt inspired by all of the ferns and used those as a watercolor subject. In other words, every aspect of the wildlife has heightened my senses and evoked creativity that keeps me feeling aware and connected throughout the journey.

Each day is entire new hike. On Avery Peak, we were rewarded with 360° sights of where we had been days before and where we were headed in the next few days. We made our way through Mahoosuk Notch, a mile of rock scrambles noted in our guide as either “the most difficult or the most fun mile on the AT”. Leaping over 20 foot gaps to an uneven point on another boulder and crawling through caves wasn’t as much difficult as it was thrilling. Even when we entered New Hampshire and it started pouring rain, we threw in our rain gear and hiked on, singing “Build me up, Buttercup” as a group. Very few things have put a damper on the day. I get emotionally and physically exhausted, but it doesn’t prevent me from waking up and happily doing it over and over… and over.

Next up is the White Mountains. I’m a bit nervous after being at camp with about 15 northbounders who formed a bubble after being held up in the Whites during bad weather. One of those thru hikers had been on the news for saving the lives of two other hikers after finding them hypothermic on Franconia Ridge. That was just two weeks ago. I’m nervous because I know I can power through the heat and rain, but I’m not as confident in my ability to handle the cold. Anyone who knows me already knows this. Don’t worry, though. Once it’s over, I hope to warm up and write about it from another trail town. In the morning, it’s back to the trail and its struggles, wildlife, and rewards. In the meantime, I’m going to try and get some sleep. Thank you for being here on the other side of the screen and following my journey. Goodnight and happy trails!

Lauren (she/her) goes by Woodchuck on trail. She thru-hiked the AT southbound in 2016, flip flopped on the PCT in 2017, and thru-hiked the CDT southbound in 2021. When she's not on a long walk across the country, Lauren is a full time art therapist, an artist and an ultra runner. She is also a New York State licensed outdoor guide, and co-owns West Mountain Guide Co with her partner.