I am taking the mental preparation for this trip very seriously and have been working on my list of reasons for undertaking this adventure as advocated by Zach Davis in Appalachian Trials.  I’ll share my list in a future post once I am happy I’ve truly got all my reasons down.  Right now, I am going to share one item I had on my list of “I am hiking the Appalachian Trial because….”  The reason is, I realized it needs to be modified – a lot – or at least clarified a bit.

I had put down that I was going the thru-hike the AT because I want to see the “storied places” along the AT for myself.  I want to see Springer, Clingman’s Dome, Mahoosuc Notch, Fontana Dam, McAfee Knob, the ATC in Harpers Ferry.  (There are so many!)   I thought that this was a good motivational reason for spending about 6 months of 2015 out in the woods.

About two weeks ago, I watched a video that someone posted of McAfee Knob using a camera on a remote-controlled quad-copter.  The weather was beautiful and the shots from McAfee Knob were awesome.  And that was before the breathtaking views of the Knob itself filmed from the quad copter.  I must confess, I watched the video three of four times and showed it to anyone I could think of.

Then it hit me.

I am never going to see McAfee Knob any better than I saw it in that video sitting on my couch.  I also realized that I could see all of those “storied places” without subjecting myself to a 2,000-mile walk.  I could take a one-month vacation, drive to each of the sites, take some short hikes without carrying all my possessions on my back, see each place on my list and  still have a daily shower and sleep in a bed.  Clearly “seeing the storied places” by itself doesn’t cut it as a reason to thru-hike.

Either that or I meant a little more than can be conveyed by the word “see“.  The more I thought about it, the more I realized I just needed to expand on my reason, not drop it.  So now I’m going to try and explain what I mean by “seeing”.  To do so, I am going to use three past trips to the summit of Mt Washington as illustrations.

The first trip to the summit took place on a family vacation in August, 2009.  This was our first trip to the White Mountains, and we did all of the touristy things.  One beautiful 80-degree day, this included a ride up the cog railway to the summit of Mt Washington.  My kids were wearing shorts and t-shirts.  Two of them also  acquiesced to bring a sweatshirt because it might be “a little cooler” on the summit.  They laughed at me all the way up on the train as I was carrying ski-pants, a winter coat, a hat and gloves in a rather unwieldy bundle.  Until we got to the top….. 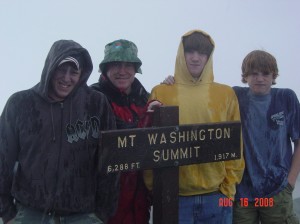 It was about 35 degrees and it was snowing.  Needless to say my children weren’t laughing at me any more.

That trip was enjoyable and we toured the top of Mt Washington – saw the observatory and Tip-Top House.  But it didn’t feel like a particularly great achievement (other than showing my children I’m smarter than I look….).  Now we’ll fast forward to 2010.

Linda and I took a long weekend trip back up to the White Mountains in September.  On Saturday, we decided to hike up the Tuckerman’s Ravine Trail to the summit of Washington again.  We got to the top and were very tired but very proud of ourselves.  Someone took a picture of us in front of the same sign again and we really, really enjoyed the view. 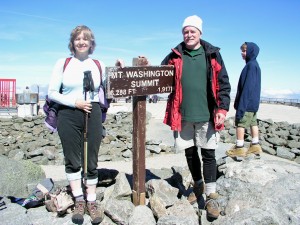 “Earning” the summit after hiking the Tuckerman’s Ravine Trail.

On the way down a set of stairs leading from the summit to the parking lot and the trail back down Tuckerman’s, we passed a rather heavyweight couple who were resting on their way up the stairs from their car.  The woman turned back and said, “Come on honey, we’re already halfway there.”  I smugly leaned close to Linda and whispered “We’ve been to halfway, and this ain’t it!”.  Of course later that evening, I was much less smug when we stood at the base of a stairway leading to the front door of the restaurant we had picked – and seriously considered driving someplace else so we didn’t have to attempt the walk up 5 steps on our tired and sore legs!

This second trip was much more enjoyable and “seeing” the summit of Washington was much more satisfactory and memorable than that first trip.  It felt like much more of a significant achievement.  When I was much younger, there was a commercial on television for a financial firm, and the tag line was “At Smith-Barney they make money the old fashioned way.  They earn it.”  Somehow the summit is much sweeter when you “earn it“.

Now I’m going to jump to 2012.  Ian and I took a four-day trip across the Presidential Range from Pinkham Notch to Crawford Notch.  We summited 11 peaks in 4 days, staying in the AMC huts each night.  Toward the end of the second day, we had just descended from Mt Clay and were sitting at a junction point of two trails.  To the left was the summit of Mt Washington, and to the right was the trail to the Lakes of the Clouds hut and dinner.  I was leaning heavily towards dinner.  After all, we’d been to the top of Mt Washington before and seen it all.  Besides, I was hungry.  And tired.

Ian was definitely leaning the other way.

After a few minutes of sitting there in silence, he said, “Dad, you really liked the band Cream, right?”

“What if you got tickets to a Cream reunion concert and they invited you backstage to meet Cream?  You’d be really excited, right?”

“Yeah?”  Where was he going with this?

“How would you feel if you got backstage and there was Ginger Baker and Jack Bruce? You’d be disappointed, right?”

“You’d be disappointed.  You’d say ‘Where’s Clapton?’  It wouldn’t be Cream with out Clapton.”

Ian then pointed at the summit of Mt Washington and said, “Dad, that’s Clapton.”

I know, it’s a bit over the top.  Of course, I never told Ian that while he was making his pitch.   Instead I was remembering that there was a slushy machine in the cafeteria and my stomach decided that a slushy was going to be the perfect appetizer before dinner.  So whether it was my desire to summit “Mt Clapton” or my stomach craving a slushy, we headed on up. 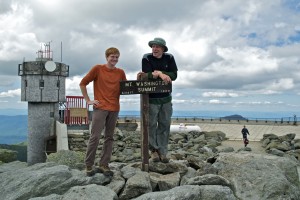 So there are three trips up Mt Washington.  Each one was better than the one before.  Each one had its own story – something that made it special.

I think that’s what I am trying to get at when I say I want to see the “storied places” on the AT.  It’s more than just seeing them, it’s being  a part of the story.  It’s adding my own personal story to the mix.  And you can only do that by going “all in“.  You’ve got to go for the whole experience.  You’ve got to “earn it”.   All 2,000 miles of it.

So come late next summer, Ian and I will hopefully be standing on McAfee Knob.  It may be raining.  It may be foggy.  We may barely be able to see each other  –  much less a spectacular view.  But that’s the only way to do it.  No matter how poor the visibility, we will “see” McAfee Knob in the best way possible and that storied landmark will become part of our story.

Seeing the “storied places” is going to stay on my list…….