I woke at Punchbowl Shelter to familiar voices. Sometime in the night 5 and Dessert Wrap had arrived, along with a hiker named Loon. It was great to run into some people I knew so quickly after losing a day. That morning I also met Hawk, possibly the fastest retired hiker on the trail and good company. Around noon 5, Dessert Wrap, and I had gathered for lunch at another shelter. The guidebook mentioned a swimming hole there but not finding it we just soaked our feet. Still, the day was hot, and the trail ahead promised a grueling climb. That’s when Dessert Wrap pulled out his travel set of Settlers of Catan, a popular boardgame that I love, except he had renamed his game Settlers of Katahdin. He had made paper versions of all the game pieces and drawn out a mini board. We played until the sun was well relaxed and then started up the mountain (Loon won).

But as we hiked it cooled off more and more. Clouds rolled in, some light rain, and then thunder like war drums. When I came up on the open, grassy balds the thunder beat on. Having seen no lightning, I took the risk and crossed through the high and open spaces. From the trees strange deer watched me like one watches a burning building. The trail kept turning back into the open but at last I made it down the ridge. All in all it was a beautiful storm. 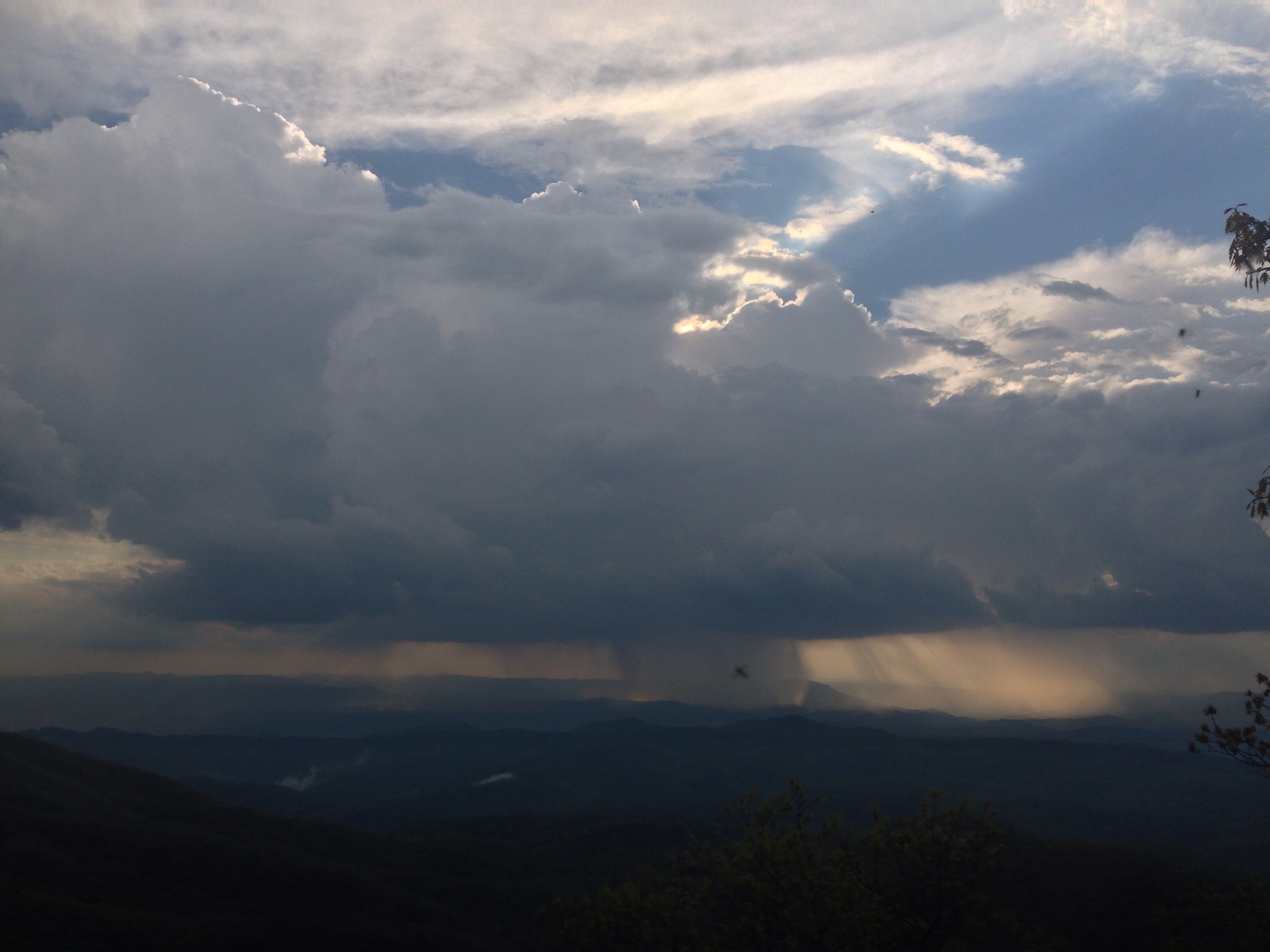 By the time I made it to camp there was a rainbow. Sadly I took very few pictures over these few days, I’m not sure why. We made a fire to hold off the night and cook our meals.

Day 66 we hiked up a mountain known as “The Priest.” At the top of the mountain is The Priest Shelter. In the logbook there, instead of writing the normal bit about the day’s condition, hikers confess their sins. It’s a fun read. If you want to know mine you’ll have to go find it.

I hiked most of the day with Loon, and learned that her brother had just transferred to my alma mater Middlebury College. Great coincidence!

A section hiker and Class of ’13 thru-hiker named Milo joined us for the day too. We made camp beside the Tye River Suspension Bridge. Unsurprisingly, we ended the day with another game of Settlers. At one point Loon jumped back and said, “There’s a snake!” pointing to a very small brown snake beside the fire ring. Since it was near our game we tried to pull it out but it burrowed in the ring. I lifted the rocks, revealed it. But as Loon lifted it up with hiking poles the poor snake slipped into the fire. It writhed and spasmed on the coals for seconds, then stiffened; the image is burned in my mind. We later realized it was a harmless worm snake and it turned into a joke. Because not only did Loon “accidentally” kill this snake, her confession at the priest had been about killing another one!

The next morning we climbed another big peak called “Three Ridges.” Afterward we caught a ride down the road to Devil’s Backbone Brewery. Though the food and beer was overpriced we enjoyed it, and then our waitress Aida offered us a ride into Waynesboro. Why not? Turned into a wilder ride than we thought after Aida took us full-speed on the windy roads she grew up on. We landed in the awesome Waynesboro hiker pavilion a day early. The thing even had solar powered outlets.

Next day we arranged a slackpack 20 miles back from the brewery into town. The hike was fast and fun, leaping weightess over all the rocks. On the way I met a hiker named Pumpkin Butt (named unfortunately by his sister who he started with, though he sometimes will offer to show people his “tattoo”). After the hike we went straight for the trail-legendary Ming’s Dynasty Chinese Buffet. Let me say that I’ve been to quite a few American Chinese buffets (and many real Chinese restaurants but that’s incomparably dissimilar) and Ming’s is by far the best. Massive selection and solid quality.Good sushi, chicken, seafood, and even fall-off-the-bone spare ribs. All for ten bucks! Hiker heaven!

It was at the restaurant when Loon and Dessert Wrap secured a ride to Trail Days, a huge hiker festival back in Damascus, VA. This would be a big turning point on the trail, where about half the hikers I knew would be losing at least three days while half would push on. Trail Days is considered a big moment in the “trail experience” and a centerpiece of the AT community. Despite all that it was an easy decision not to go. Though I love the community it’s not why I’m here, plus it would mess up my budget and schedule.

So the next day it was on into Shenendoah National Park to meet the hikers who’d stuck around.