Shakedown Hike, and Yeah, There Was a Deluge

The javelinas started calling shortly after nightfall. A chorus of EMS sirens grew faintly and then cut through the pine grove separating the Houston Mesa Horse Campground from Highway 87 out of Payson, Ariz. The squealing intensified to something terrible. It was like that sound around the corner in the other room at the haunted house during Halloween. An ambulance must sound like a javelina in heat with the ferocity of their sequels, equally desperate and wild. As the sirens passed, and the red lights vanished, quiet fell.  So too the rain.

The camp host drove up earlier that afternoon, and gave fair warning about the herd of javelina in the campground. “They love to mess up a campsite looking for garbage,” she cautioned. “Worse than a bunch a high school juniors with a fake ID on prom night.” Now if a raccoon is endearingly referred to as trash panda, a javelina could be likened to a steel-woolen Hoover vacuum. Herds up to 100 deep have been reported, and I imagined them kicking up dust in a small stampede as campers fell from their aluminum folding chairs clutching cans of Bud Light nestled in neoprene cozies. They charge, going for the knees, foam and snot dripping from their thick, bristled snouts. They’re my neighbors now, and I love them.

Everything in the desert is charged with unforgiving anger. The animals and insects come armed, some give warning while others strike in silence. The rocks match their sharp edges to the pricks of the cacti. All plants both near the ground and overhead sport needle point spines. The summers are unforgiving and will slowly drive the most steady of mind into madness. The storms come suddenly and with a fury. The desert, Arizona, is a land of contrasts with each opposite pushing the other toward the extreme. It is my home, and a land that has nurtured me. 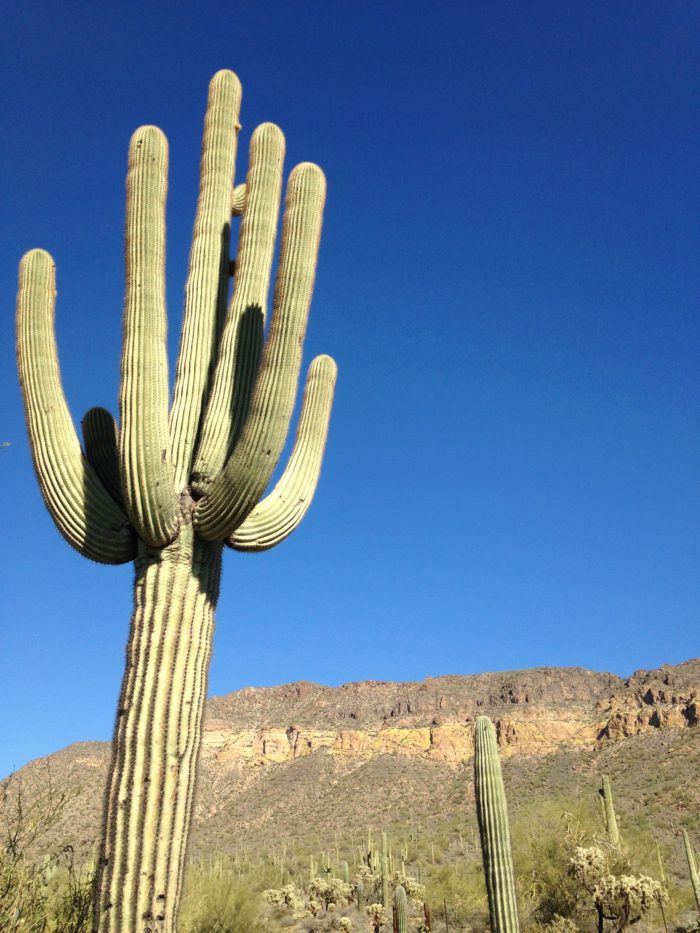 The Plan, The Changes

As I began researching this shakedown trip, it was a comfortable 40 degrees at night with an agreeable 65 during the day. These conditions would give me a good feel for what I would hope to find during the first couple weeks on the AT under favorable conditions. With fairly reliable water sources along the Highline Trail below the Mogollon Rim, which coincided with the Arizona National Scenic Trail, it seemed like a fitting route to stretch my legs and try a new setup. Despite the mildest of already mild Arizona winters the weather did not cooperate. With a loaded backpack and four days of food, I ended up deciding to turn back after a few hours on trail. I was concerned with the coming forecast of 30-mph-plus wind with freezing rain and snow ahead for a majority of this trip. On one hand, this could have been wonderful practice for a horrible day in the Smokies, and I figured I could deal with that when it arose. As for the task at hand, the goal was to try out a new setup and have some fun. As I quit my job literally the day prior I figured I could abandon my original aim and still accomplish what I needed. 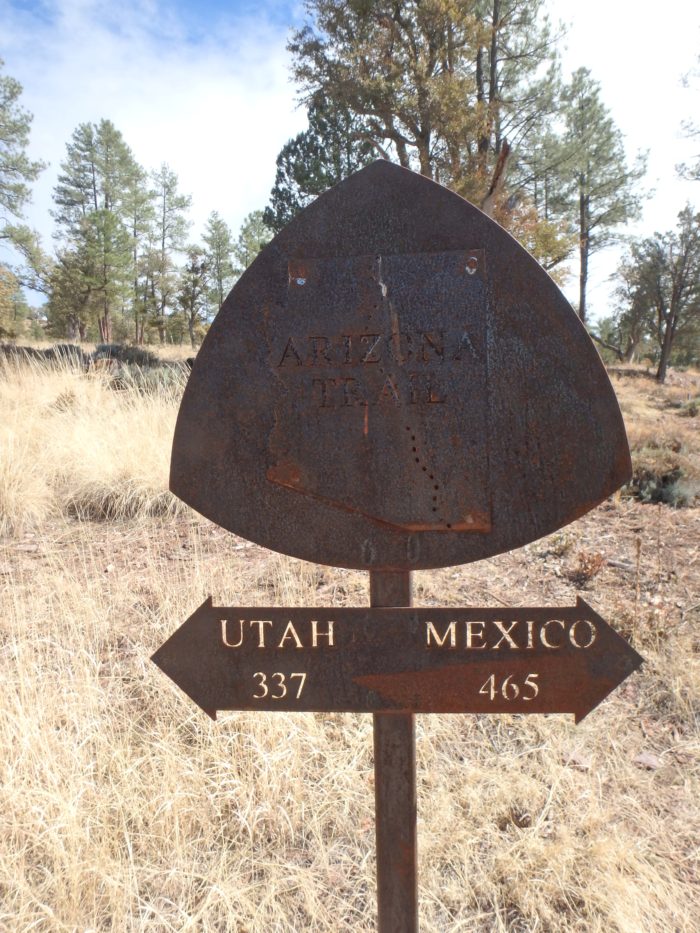 At Least I Got Some Rain Practice

The rain was light at first, and I was relieved when the wind stopped blowing in toward the foot end of my flat tarp. I had pitched the foot end low to the ground to deflect the wind and give me more of the storm mode low profile, which we will learn didn’t help me. The rain grew heavy and sounded like lead balls pinging the thin layer of silnylon protecting me from the deluge. This wasn’t the sweet, massaging noise of the Pacific Northwest precipitation where rain is a magical experience of existing within the environment of a cloud. This was mean rain, which I thought was hail, and I was certain it was going to impale me. The front end of my tarp was pretty wide open and I felt the splash at the head of my bivy. I deployed my trekking umbrella to make a tarp-umbrella-door with only minor reprieve. Otherwise I was comfortable making minor adjustments between convincing myself softball sized chunks of ice wouldn’t tear my shelter apart, killing me in the process and leaving me to be eating clean by desert boars with a taste for trash. 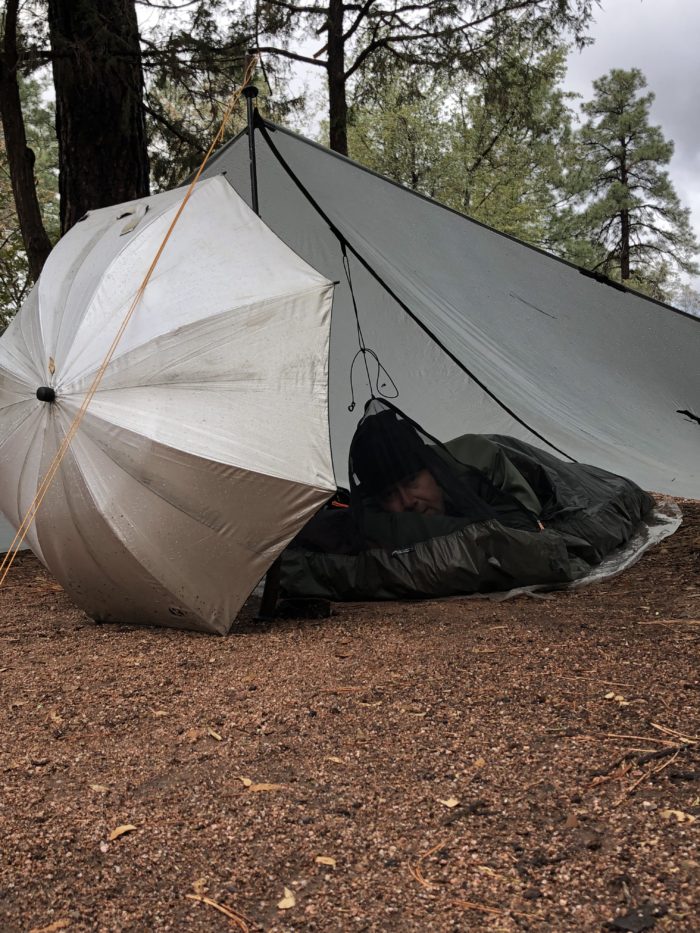 Now Everything Is Wrong

At 2 a.m. someone else in the campground got up to use the privy, and I heard the door slam shut and then the javelinas began squealing against the rain. I checked out my space under the tarp with a headlamp and could see a small stream forming near the foot end, running under the tarp, as well as my bivy and ground sheet. My pack was off to one side and that was now sitting in a puddle of water. I did my best to grab the pack and a few other things I had scattered about and to jam everything in a compactor bag. From what I could tell everything on the other side was relatively dry so I set it off to the side. I looked for where the water was coming from and tried to decide how bad the rest of my night might be. There was a pool of water to my right and at the head end of my shelter, with water pooling around the bivy, its source being somewhere outside the tarp and running under.

I lay for an hour listening to the rain and the sounds of sloshing water underneath me as I rocked back and forth. I did a mental checkup on myself, taking an examination from head to toe. Am I cold? Wet? Frustrated and a little worried but overall OK. No other obvious problems that could definitely make this whole experience that much worse.

The rain stopped long enough to look over my kit and pack up. The bug netting over my head on the bivy was speckled with mud and dirty, but dry. Small droplets of water clung to the nylon floor in that annoying way that it does. The same was true of the flat tarp. Little is more uncomfortable than jamming a wet and cold tarp into a stuff sack; it’s like putting one’s fist into a cold tub of sour cream. The plastic ground sheet was wet and covered in forest material. This I shook away before the rain began again.

Be flexible. There’s more to this story of where I went afterward. I went down to Aravaipa Canyon Wilderness in Southern Arizona. It was a very relaxed backpacking trip into a place with beautiful scenery. I previously researched this location and I didn’t know this was plan B until it was. I’m glad I came armed with options and a willingness to change and adapt. It’s good to have bailout options if the need arose.

Check weather regularly. I get the news I need from the weather report. It’s important to know what to expect weather wise. It’s a part of trip planing and integral to Leave No Trace practices.

Test gear in controlled environments. While it’s fun to set up camp in your backyard, things are different in the field.  On the AT I am using so many pieces of gear that are different than the ones I used on the PCT. This was really going to be the first time I tried much of it out. I think I made a better decision to turn around and camp at a Forest Service campground rather than being deep in the backcountry. Knowing that if it really came down to it, having the car right there was reassuring when it looked like everything was going bad.

Look at the big picture. This was important during my campsite selection. I was too concerned with finding a spot to pitch my shelter that was covered overhead that I failed to properly ready the topography, or the lay of the land. In the morning it was obvious I was right in the middle of a drainage and could have saved myself some trouble if I would have taken an extra minute to ready the lay of the land. This isn’t typically a skill folks in Arizona worry about, but I know I need to be more aware of campsites on the AT.

Bivy saves. The tarp sags when it gets wet and I didn’t bother to tighten it in the night. This sagging rested on the upper of the bivy and transferred a slight amount of moisture into the foot end, but nothing to be concerned about. To my surprise, with the level of water under the tarp, nothing seeped or wicked into the bivy via the seam between the floor and the upper. Judging by where the water was collecting, had I simply been cowboy camping under the tarp both my pad and bag would have been in the water, creating serious discomfort as well as a potential hazardous situation. While I will opt for a smaller tarp than my 10×10, the bivy is here to stay.

Have fun. If you ain’t having fun, what are you doing? 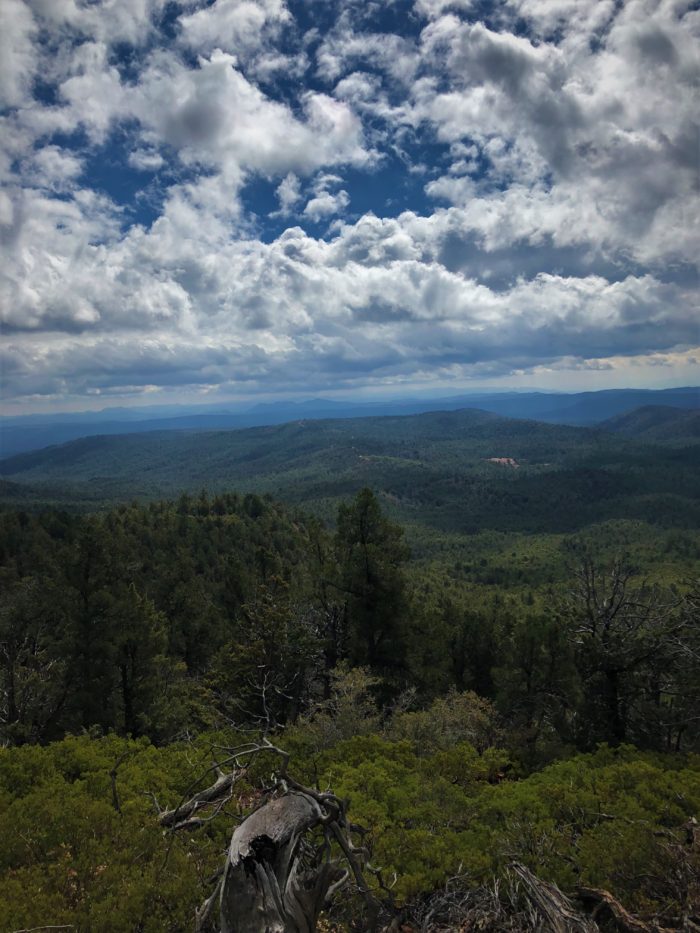