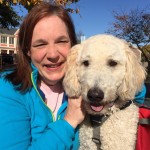 Shenandoah – The Good, the Bad and the Ugly

I started hiking with the Snail Brethren, a mother and son duo I met last year during my hike. They hiked over 1,400 miles last year until the son ended up with a stress fracture of his foot. The mother had knee surgery in February and was given the all clear to start hiking at the beginning of May. We met in Waynesboro, Va., and started hiking on May 7. The plan was to start with low miles, which I was OK with. 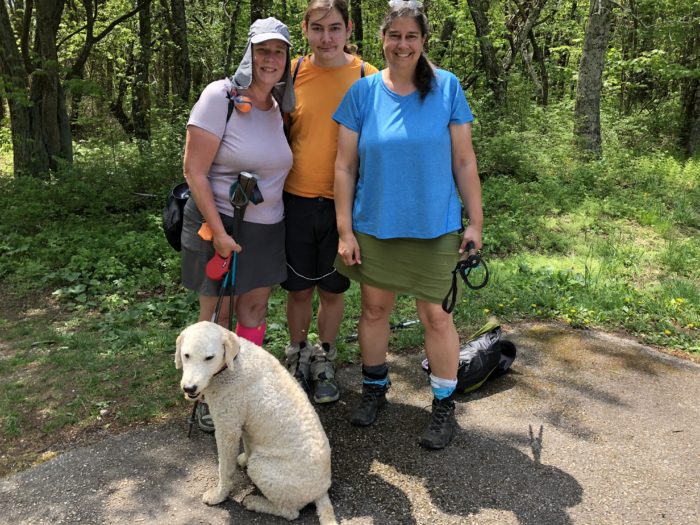 Through the AT women’s group, we were invited to stay at somebody’s house and she was going to slackpack us through the whole Shenandoah National Park. You cannot imagine how wonderful and generous this was. The park is split into three regions — south, central, and north — and Skyline Drive goes through all of it, about 100 miles. There are only a few ways to enter the park, reach Skyline Drive, and the speed limit is only 35 mph.

This wonderful trail angel lived in the northern part so she would drive two hours, drop us off, then pick us up again and drive back home. She is in the process of hiking the 500s of the Shenandoah; there are 500 miles of trail in the park. So while we hiked the AT, she would hike the trails she had not covered yet. She said that driving us all over the park was great for her since it forced her to hike some of the trails she would normally postpone and she had company on the drive back. All I know is that it was great for us.

Not only did she drive us, we got to stay in her house. It was a beautiful house, nestled in the woods with lots of land. She was also babysitting her son’s dog, Tpup, so Yankee had some company. We ate good food and slept comfortably every night. Who could ask for anything more. 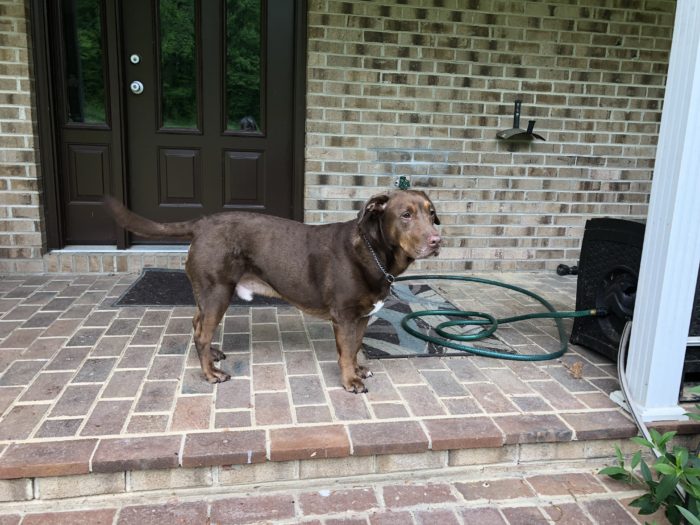 Since the park is traversed by Skyline Drive, which is geared for motorists, there were views galore. As the days passed, the greenery got greener and flowers bloomed. Beautiful! I also saw several bears as well as deer and other critters. The park also has waysides, campgrounds, and hotels, so there were plenty of opportunities to get extra food. The temps were hot so being able to buy a cold drink or eat ice cream without having to carry it was mmm good! Finally, there were still mountains to climb but they were not as tall as the previous ones, which definitely helped my pace. 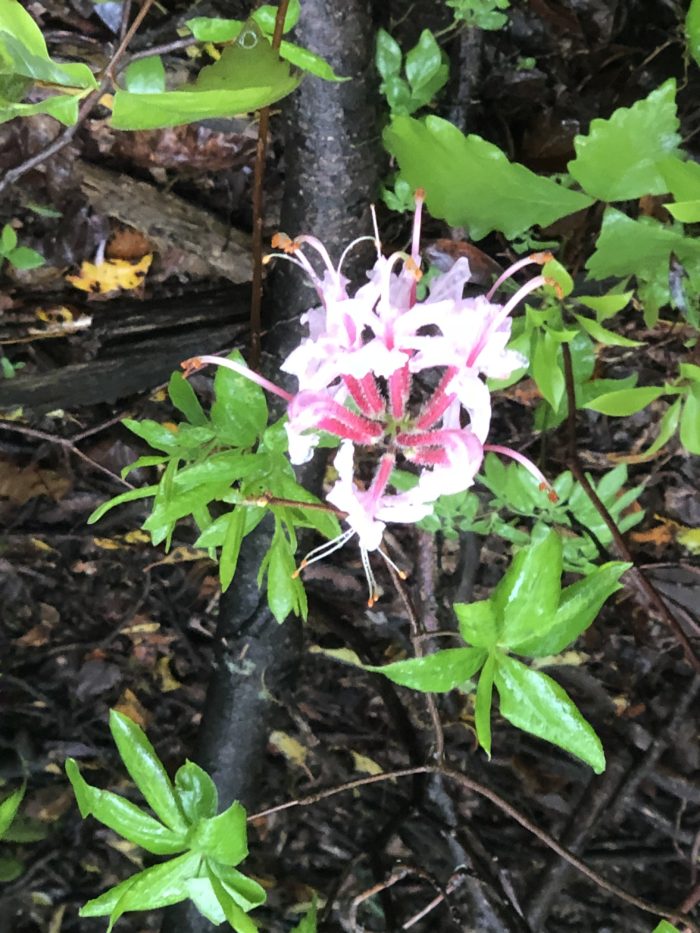 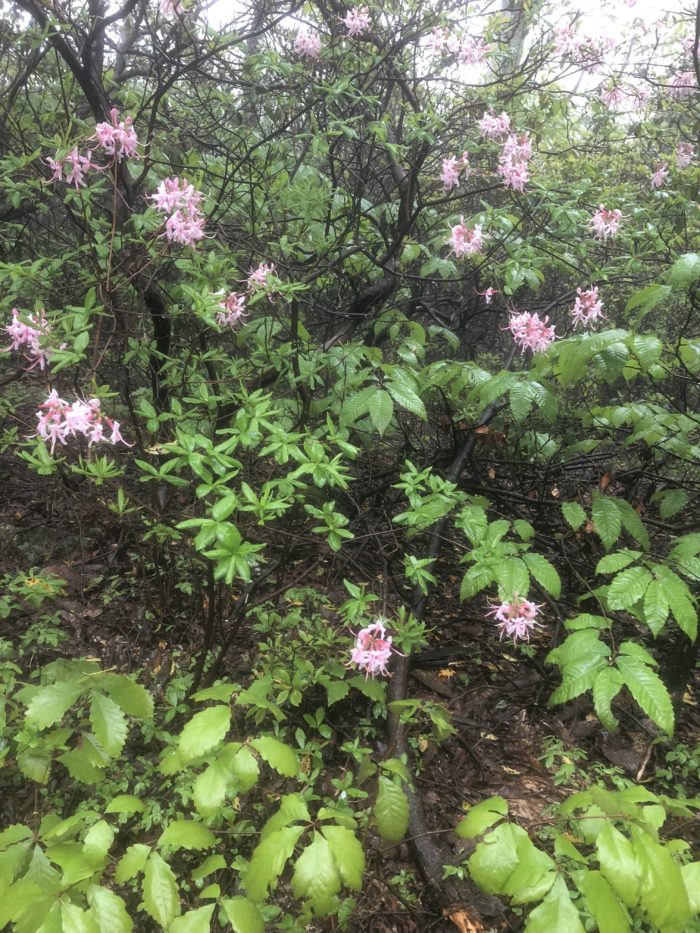 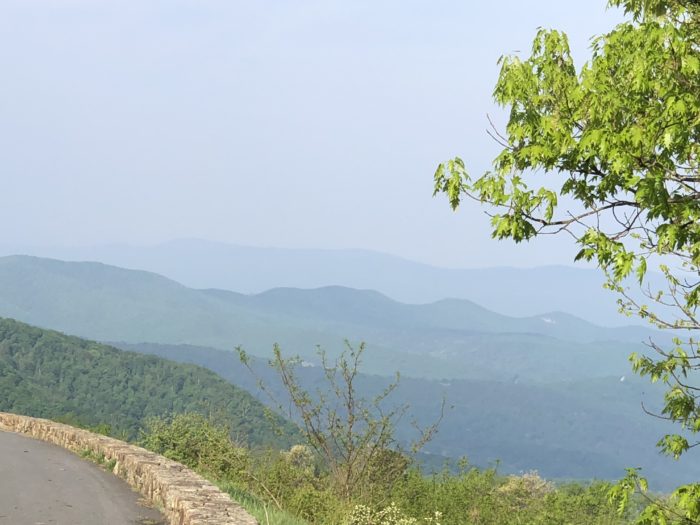 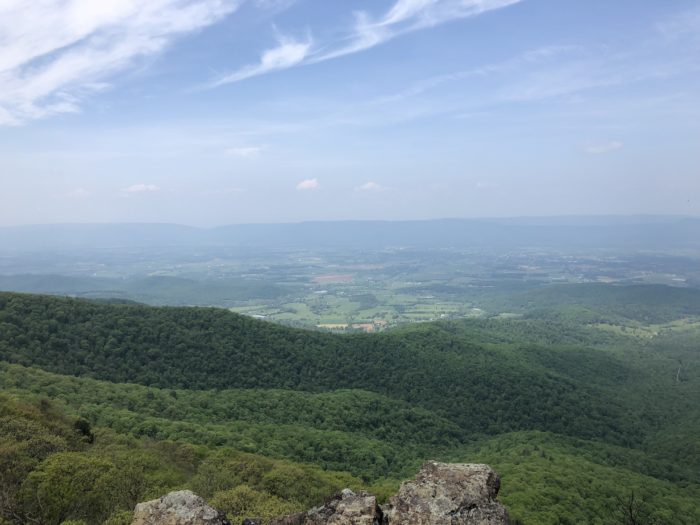 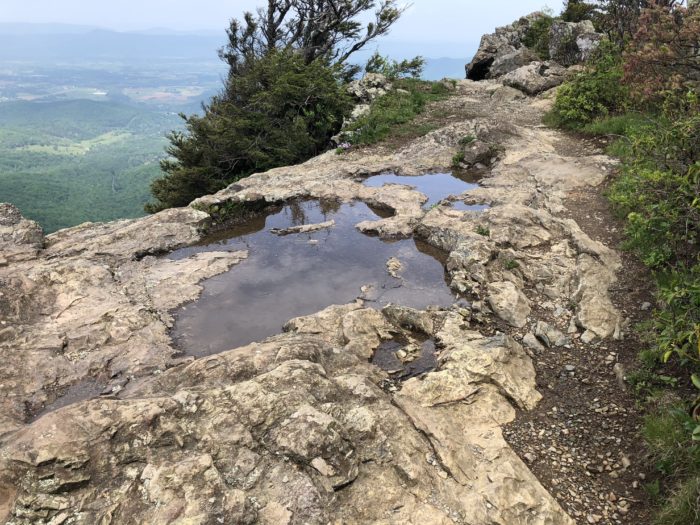 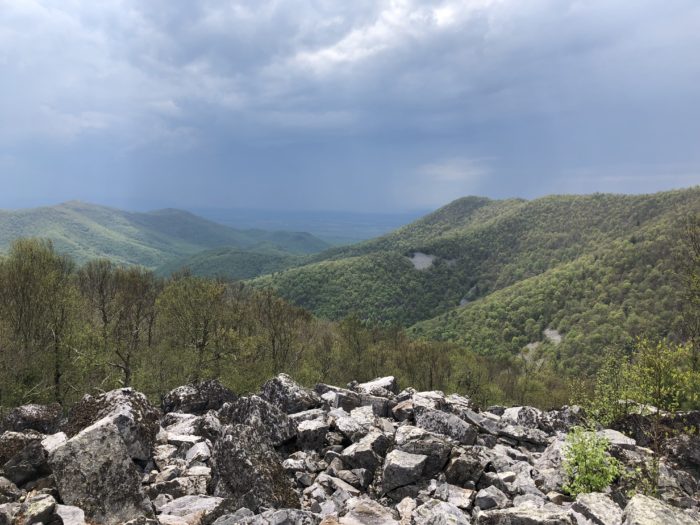 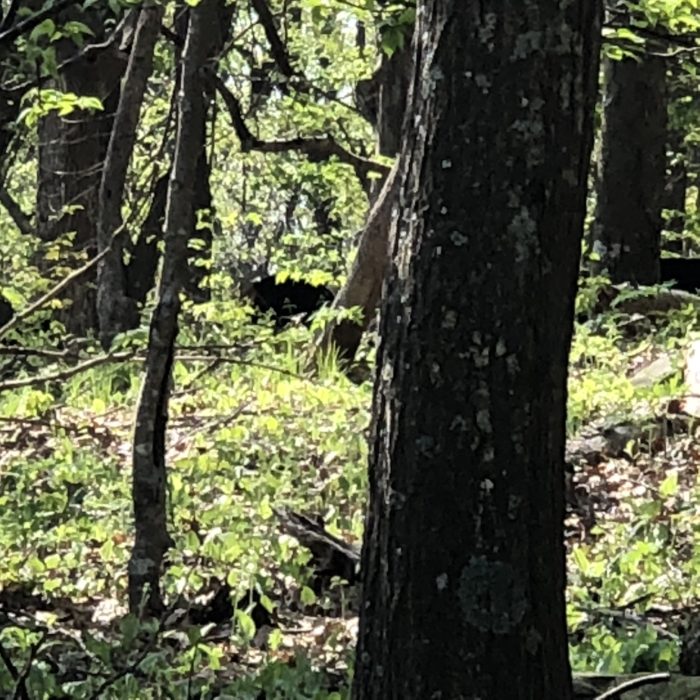 The black blob in the middle is a bear. I swear! 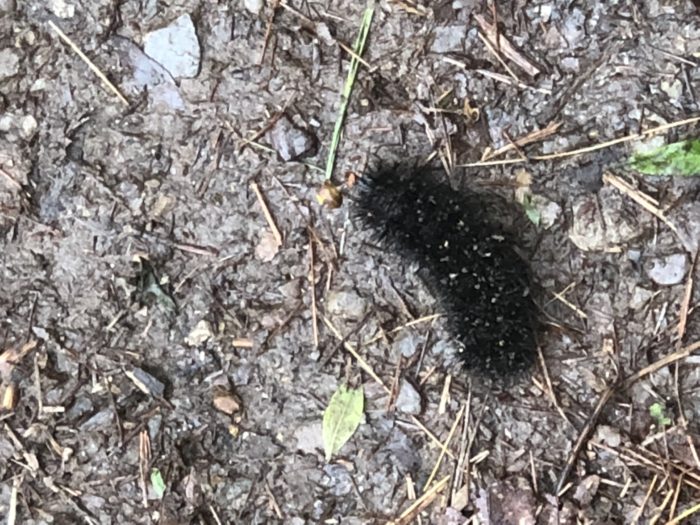 The first day in the park was difficult for me. The first hour was fine, and I was able to keep a good pace. Then I started to slow down. I was even slower than MooBear (mother of Snail Brethren) who had had surgery three months ago. I also had already hiked over 300 miles but had taken three zero days. I wondered if I had lost my mojo. Then the nausea started, followed by aches. I finally made it to the rendezvous point where we were meeting our trail angel and hostess. Unfortunately, I had to tell her to pull over a couple of times on the highway so I could upchuck. What great fun it is to throw up on the side of a highway with the cars speeding by and your hair whipping around your face, trying not to get vomit on your hair or self.

When I got to the house, I continued throwing up and also it was coming out the other end. Everybody was so nice and thoughtful. They made sure Yankee had food and water while I just crawled into bed, shivering and hurting. After I stopped vomiting, I was able to get some sleep and the fever broke in the middle of the night. I am pretty sure this was food poisoning from the Chinese buffet I ate the day before.

I did not hike the next day since I was so weak but I was feeling better. It took a couple of days for me to get back to full hiking mode.

As I mentioned previously, the weather was unseasonably hot. It often was in the 90s with the humidity. I also had to do more miles than the Snails since I needed to get to Front Royal by a certain date. I was scheduled to take a week off the trail and drive to Myrtle Beach for a friend’s birthday. Because I had been sick, that meant I had to push harder. Unfortunately, after several tough days, Yankee became exhausted. I could tell that he had had enough when he simply lay down in the shade and refused to move. Fortunately, we were not too far from our pickup spot so I simply dumped water on him, took a break, let him lie for a while, then continued. I decided to leave him for a few days back at the house where we were staying. It was strange hiking alone but I knew that it was the right thing to do. After that he was raring to go again. 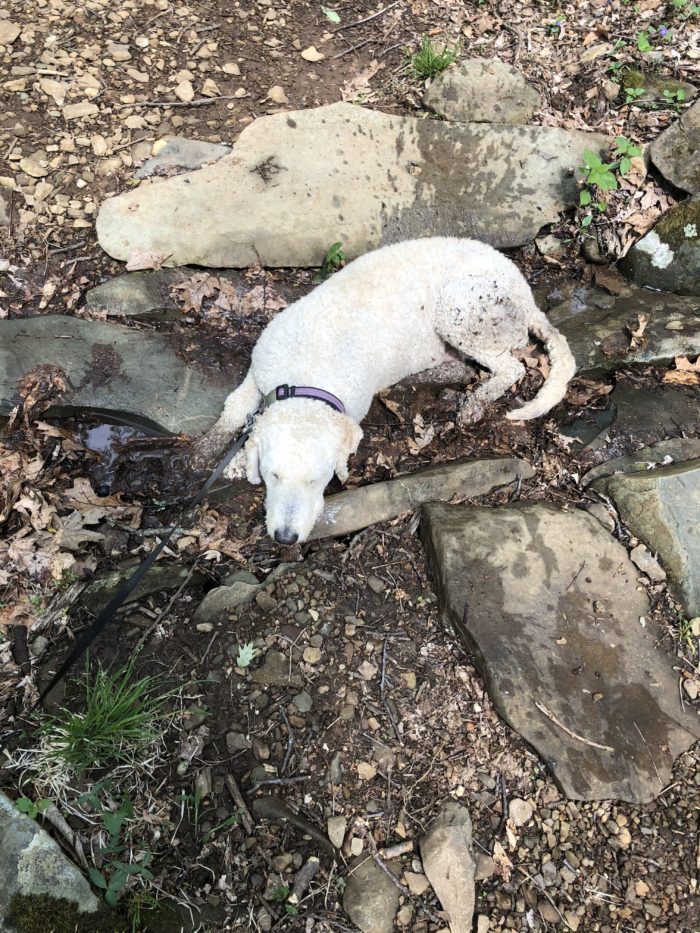 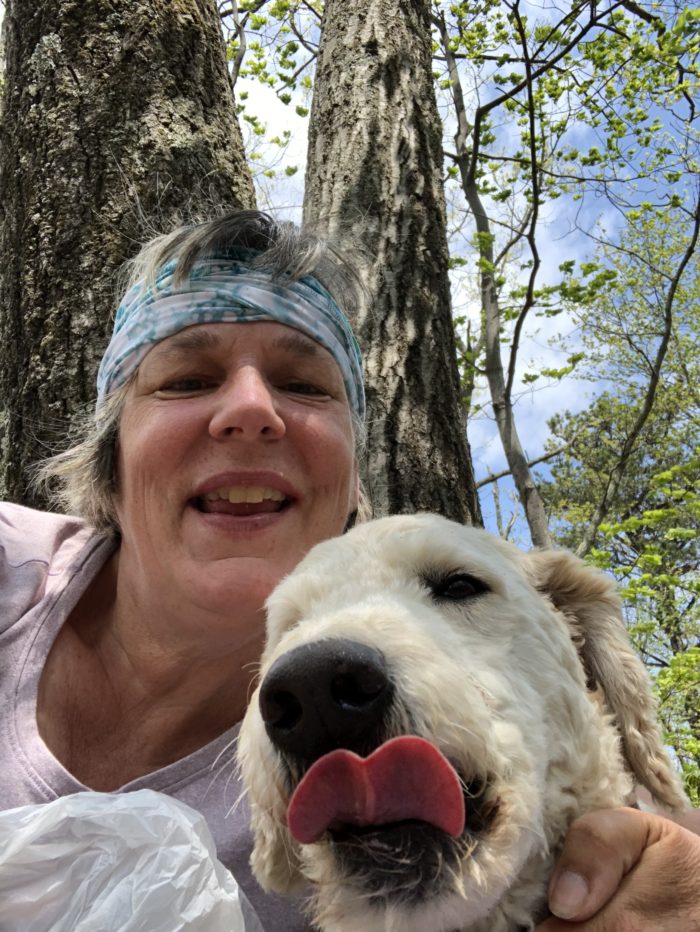 The last three days in the park were tough. It rained for three days straight. The trail got muddier and muddier, which meant slipperier and slipperier. I also tend not to eat or stop to rest when it is pouring. Yankee had a ball; the muddier the better. At first you are able to somewhat avoid the mud and puddles but after a while it is impossible. The last two days were also cooler so I had to be careful not to become hypothermic.

The last day was the worst. By then, the trail was often under water, which meant water was coming into my shoes from the top. The trail finally  came out of Shenandoah but I was faced with a very steep downhill over rocks and mud (scary!) and finally into a muddy field that meandered downhill. Oh what joy trying to keep from going splat every few seconds.

I was so muddy at the end of that final day, I simply jumped in the shower with all my clothes on. I figured it was the easiest way to clean them and myself without turning the hotel room into a disaster area.

As for Yankee, I waited until the next morning and took him to a dog grooming place where I proceeded to try to get him as clean as possible. 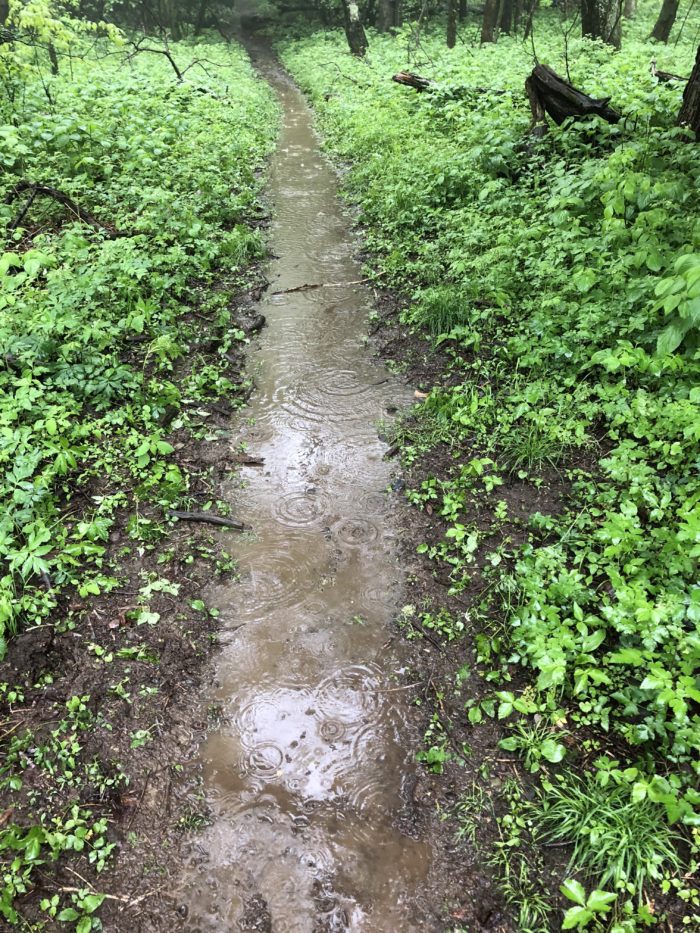 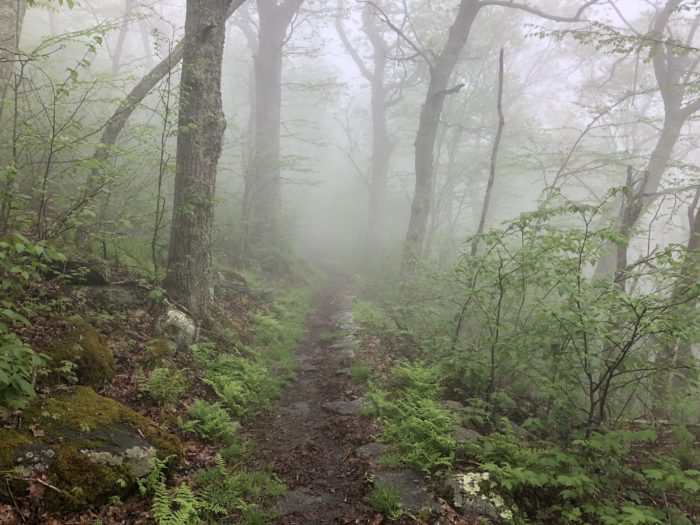 Next up, the end of Virginia!