As I climbed Cobble Hill while listening to Thirst by Heather “Anish” Anderson on Audible, I had my sights set on the next shelter where I planned to stop for lunch and to filter some water. When I came up on the side trail that led to the shelter, I met a hiker named Simon sitting on a log having lunch. I asked if he cared if I sat with him and ate as well. I learned that he was from Switzerland, and he came to the US for one month to do some exploring, and he was on day one of a week on the AT. He had plans to do a seven-mile day while I planned to hike a 13.6 mile day.

We parted ways and the miles pleasantly passed while I got completely absorbed in the audiobook. I walked past Sage’s Ravine, which was completely beautiful, and I wished I had the right stuff to be able to drop everything and take a swim in the gorgeous, clear, deep swimming holes. I looked around for Simon, who had said this was where he was staying, but didn’t notice him. 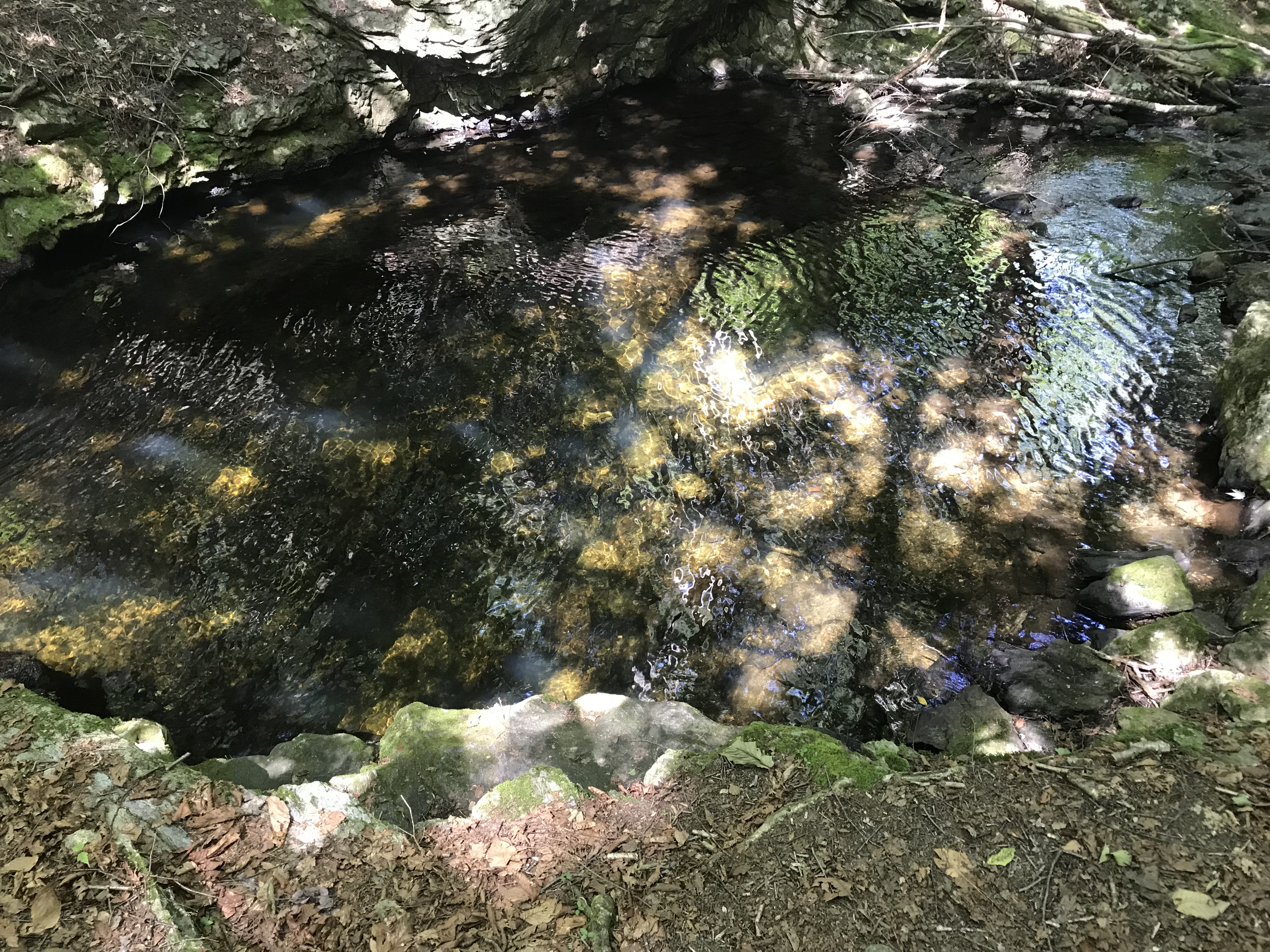 After crossing into Massachusetts, I climbed up Race Mountain and found a good overlook spot to have some snacks and filter some water. As I was sitting there enjoying the warm sunlight enveloping me, Simon came along the trail. “Hey!  You surpassed your goal!” I said encouragingly. He stopped to enjoy the view with me, and while we hung out there, another guy named Brad, from South Africa, came up and enjoyed the view and chatted with us.  I shared homemade cookies from my resupply box with them, and eventually we were all on our way. 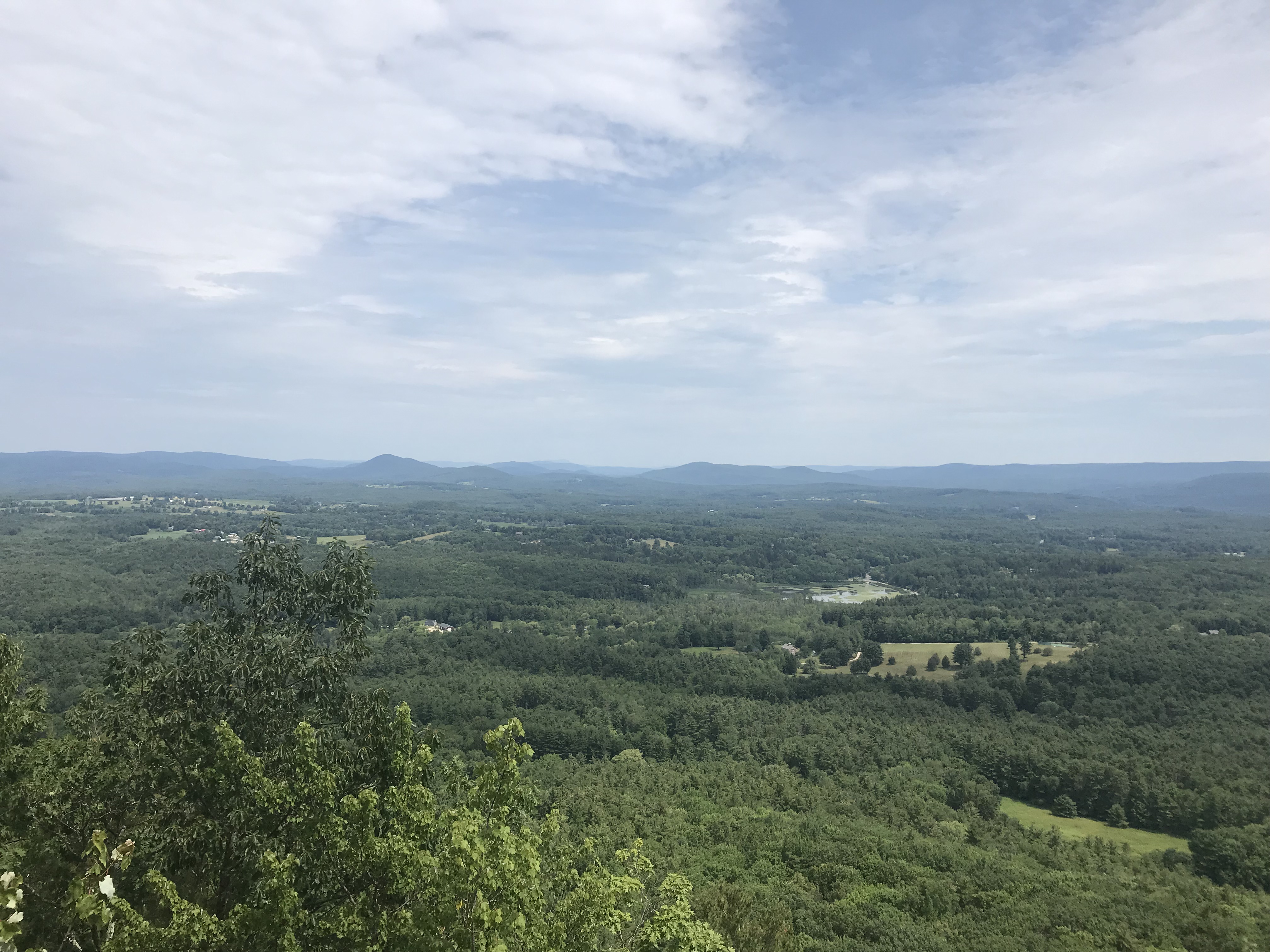 I camped alone that night at a shelter and set up just my hammock and bug net without my rainfly, which I rarely do, and watched the almost full moon make its way across the night sky.  I woke with the sun like I normally do and hiked a considerable distance up to the privy.  When I got back down to my camp, I was feeling extra tired so I decided to lay back down and snuggle into my sleeping bag.  This little cocoon of my hammock, underquilt, and bug net cradling me with my cozy sleeping bag felt like a snuggle palace, and from that morning on I have referred to my sleeping space as “Snuggle Palace.”

I left the shelter with four liters of water, having heard that a lot of the water sources coming up would likely be dry.  I drank my first liter as I normally would, but halfway through the second liter, I was getting cautious because every single marked water source has been bone dry all day.  It continued to get hotter, and I was beginning to get a headache.  I stopped to have lunch in the field that was home to the last battle of Shays’ Rebellion under the shade of one lone tree, and as I sat there baking in the heat, I became so sleepy that I had no other choice but to stretch out right there and set my alarm for a ten-minute nap. 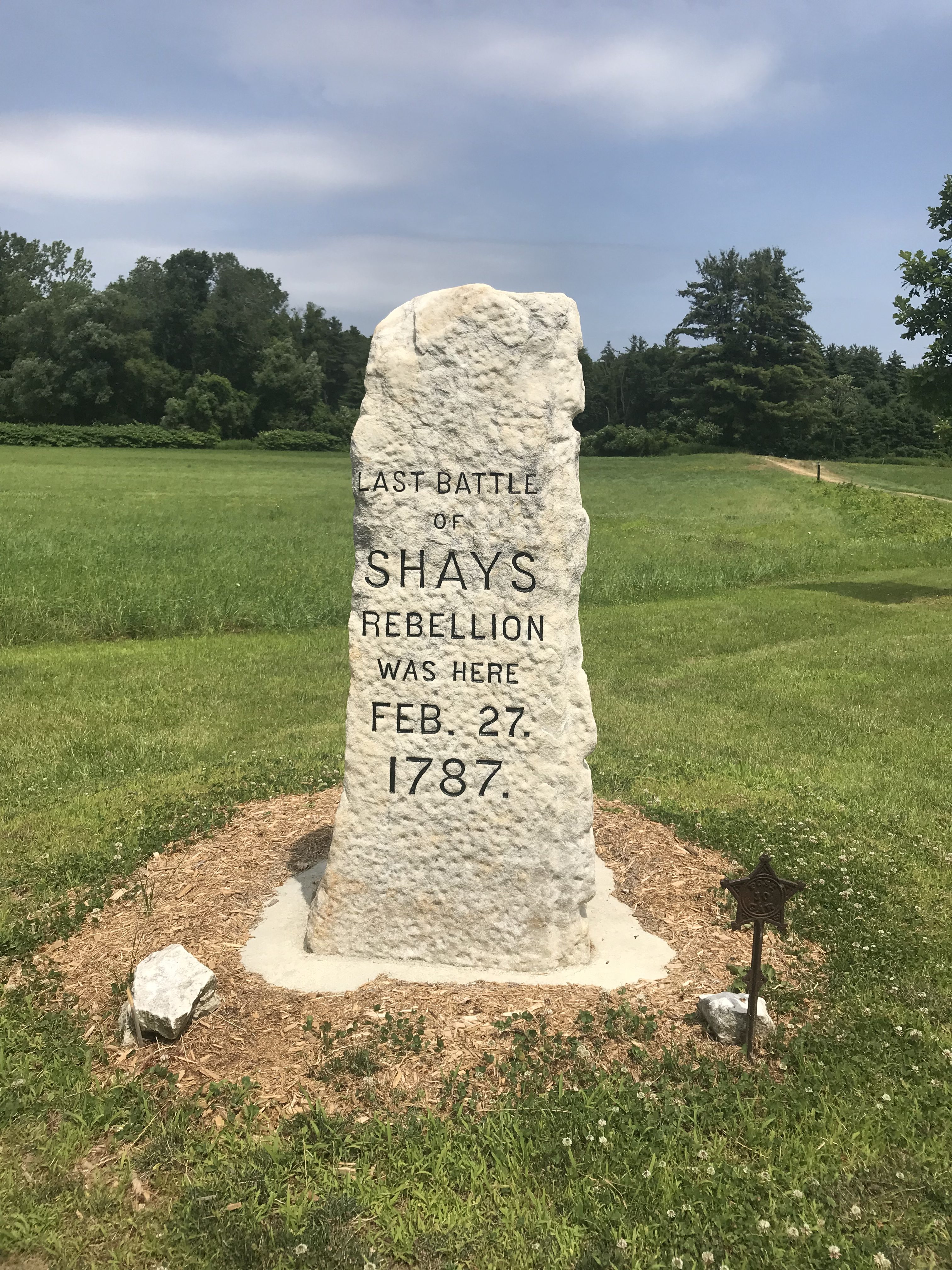 Walking through history. That dirt path you see on the right is the AT.

When I got up, feeling weary, I filtered my last two liters of water and took a sip, frowning at how warm it was.  I continued on, and eventually came to some water in an area that smelled terribly of cow patties.  The smell was obviously coming from the muck and water alongside the trail.  I still had five miles, all uphill in this heat, to the shelter that seemed to be my only chance for a guaranteed water source.  Feeling disgusted, I dipped one of my “dirty” bottles into the cow water, and hoped I wouldn’t need it.

At three miles left to the shelter, my head throbbing and one more sip of hot, clean water left, it was clear to me that I was going to have to drink the gross, just-in-case water.  I decided to be extra cautious by chemically treating it first, then also filtering it.  As I was sitting on a rock, watching the Aquamira tablet dissolve, Simon came puffing up the hill.  He raised his arms victoriously when he saw me, and I cheered for him until he slouched onto the rock across from me, red-faced and drenched in sweat.  Probably just like me.  I confessed to him about the nasty water I was about to drink, and we proceeded to lovingly refer to it as the shit water.

We continued walking together for what felt like the longest three miles. After 30 minutes, I stopped again to filter the now chemically treated shit water.  Simon sat with me and watched apprehensively as I squeezed a generous helping of Mio Sport into the chemically treated and now filtered liter of shit water, then took a sip.  I was so thirsty, I was just happy to feel liquid rushing across my dry tongue.  I shrugged and said “good enough!” And we kept going.

Once at the shelter, we really had to work for the water because the stream was .3 miles straight down the mountain, then we had to huff and puff it back up the mountain, carrying liters of heavy water back up to camp.  I was so thirsty, my dehydration headache nagging at me, my body sluggish and ready to rest.

It had been an exhausting day, so as soon as I tucked into Snuggle Palace, I fell deeply asleep.  At some point in the night, something woke me from a dead sleep.  Disoriented and drowsy, I thought for a split second that someone had said something to me to wake me up.  I laid perfectly still, not daring to breathe, trying to hear anything to give me a clue as to what the sound had been to wake me up.  When I heard the sound again, I knew for sure it was the same sound that had woken me up.  It was a weird, rhythmic grunting/whining type of a sound, clearly an animal, and it was happening directly at the opening of my tarp, right at the head of my hammock.

Instinctively, I clapped twice, and the thing ran a few steps away from me, making its whining/grunting sound as it went.  It was so pitch-black dark that I was just staring into a dark void, able to see nothing.  In the woods just across from me, I heard something much bigger meandering around while the smaller thing, making its whining/grunting sound, ran around more quickly and sporadically.  Petrified, I concluded it was a momma bear and her little cub.  With my eyes wide open, my ears sharply listening, I stayed awake for several hours as they helped themselves to completely exploring the campsite.

Somehow I managed to fall back asleep and make it through the night.  I completely changed my plans for the next day to avoid staying at a campsite marked with bear activity because the previous night had me pretty spooked.  One mile away from my destination for the day, I got caught in a rainstorm, then set up camp in the rain and got into Snuggle Palace at 5:30 p.m. and proceeded to sleep soundly for the next 13 hours.

In the morning I was excited to wake up because all I had to do was walk seven miles (in the rain, of course) to a road crossing where my sister was going to pick me up and take me to an Airbnb for a weekend off.  I saw Simon one more time at a trail stand selling snacks and drinks.  Several hikers were gathered around a picnic table eating chips and drinking Gatorade and sharing stories, Simon and myself included.  One guy, completely unprompted, starting going on a rant about how you should “never drink shit water.”

Simon looked at me wildly and we both burst into a fit of giggles.