Mailbag with Jennifer Pharr Davis: Should the Entire Crawford Family Have Been Allowed to Summit Katahdin?

Welcome to Mailbag with Jennifer Pharr Davis, where we take hikers’ questions and pass them off to the trail legend for her wisdom and analysis. JPD’s newest book, The Pursuit of Endurance is available now.

Have a question for an upcoming Mailbag? Email [email protected] and we’ll pass it on. If your question is chosen for our next Mailbag, we’ll send you a signed copy of JPD’s newest book.

How do you feel about the Crawford family hiking the Appalachian Trail and not being able to summit Katahdin at the end of their thru-hike? –Scott

The Crawfords have generated a strong reaction from the long-distance community, garnering strong supporters and vocal detractors. I did not closely follow the Crawford’s journey, but I heard about their adventure from other hikers. What I have come to understand is that a mom and dad with six kids, whose ages ranged from two to 17, traversed the entire Appalachian Trail only to be denied the path’s final summit at Katahdin. The rules at Baxter State Park do not permit children age six and under from climbing above treeline on the park’s highest mountain. And the park was unwilling to make an exception for the Crawford’s two-year-old son. 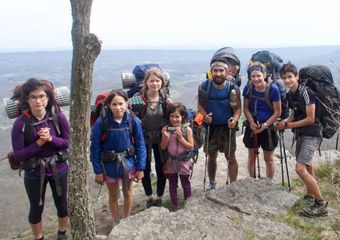 I don’t know enough about the Crawford family and their hike to have an opinion about whether it was responsible parenting, exemplary parenting, or a mom and dad who pushed their kids too hard and too far. If I had to guess, I’d say it was probably a swirl of all three. However, it’s misplaced for naysayers to suggest DSS should be alerted to an attentive mother and father who decided to take their children on a family adventure in the woods. 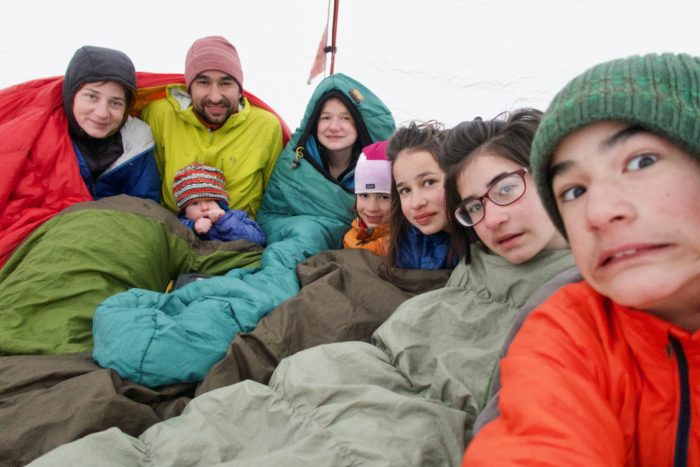 Throughout history, the majority of youth have spent hours of active outdoor time farming, apprenticing, and toiling alongside their families. Modern culture does a disservice to children by underestimating both their physical ability and emotional capacity. Most parents, myself included, could be just as easily accused of neglect for turning on the television or handing our children a tablet and directing our attention elsewhere.

I can’t imagine parenting without help from PBS Kids, or thru-hiking with my five-year-old daughter and one-year-old son. My daughter has more interest in dressing up like a princess and singing to squirrels, sitting by a creek and coloring, or strip-mining all the M&Ms out of our trail mix than she does in hiking down the trail. Even as a five year-old, her trail name remains: “Hold Me.”

Healthy, able-bodied children are less of a risk on the mountain than individuals with health concerns or lack of fitness and backcountry experience.

So no, I wouldn’t want to deal with my daughter’s bellyaching or my son’s diapers on a six-month thru-hike. But that doesn’t mean that my children are not capable of hiking the Appalachian Trail… or Katahdin.

There have been several young children who have completed the Appalachian Trail with their families. At five years old in 2012, Buddy Backpacker completed the AT, and now he’s a Triple Crowner. Lisa Murray, a single mom from Florida finished the AT in two summers hiking alongside her young twins. The twins started hiking when they were three years old and finished the trail when they were five years old. Last year, Bekah and Derrick Quirin carried their one year-old daughter the entire length of the trail. Thru-hiking with young children is not a new phenomenon. There is record of a six-year-old thru-hiking in 1980.

My understanding is that Buddy Backpacker and Lisa Murray’s family were both able to summit the mountain with “underage” hikers. The Crawfords, however, were not granted permission to climb above treeline. I’m not sure if the discrepancy has to do with a difference in the age of the children or Park administration. But if a child is able to traverse the entire Appalachian Trail—unassisted or in a carrier—they should be allowed to summit Katahdin.

Yes, Katahdin is a difficult and strenuous climb, but no more challenging or technical than Mahoosuc Notch, The Bigelows, or Mt. Moosilauke, to name a few. Healthy and able-bodied children are less of a risk on the mountain than individuals with health concerns or lack of fitness and backcountry experience. I would feel a lot more confident getting a four year old up and down that mountain than a fit 80 year old, a heart attack survivor, or a hiker with moderate to severe asthma. Yet, Katahdin’s summit and history are filled with these finishers and many far more extreme examples.

I’m not sure why Baxter State Park was unwilling to make an exception for the Crawford family. They might have a very good reason. I’m sure that the rule’s origin and essence is rooted in wanting to keep young children safe. The difference between a middle-aged obese smoker climbing the mountain and a mom carrying a toddler is that the middle-aged adventurer is able to assume their own risk while the child’s experience has been decided by his or her parent. Still, an important element of the wilderness experience—and a child’s development—is learning responsible risks through adventure.

I think it would be fair for Baxter State Park to require families with young children to sign a waiver, provide a doctor’s note of consent, or even pass a fitness standard or provide documentation of previous backcountry experience to gain access to Katahdin. But, ultimately, the decision about whether a child can summit a mountain should rest with the parents, not Baxter State Park.

In August 2016, I reached Baxter Peak on the top of Katahdin for the fourth time. The next month I gave birth to my second child.

I never considered it to be an extreme risk to hike the mountain pregnant. During my first pregnancy, I backpacked 500 miles through the Spanish Pyrenees that was capped off by a 50-mile Icelandic trek in my third trimester. I didn’t log quite as many miles with my second child, but I did summit Mount Saint Helens with an ice axe in June and I worked as a professional hiking guide on the Appalachian Trail and the Camino Santiago in July. On August 2nd, at 32 weeks pregnant, I climbed Katahdin as the culmination of several days spent canoeing, hiking, and picking blueberries in the backcountry of Maine with a group of teenagers. 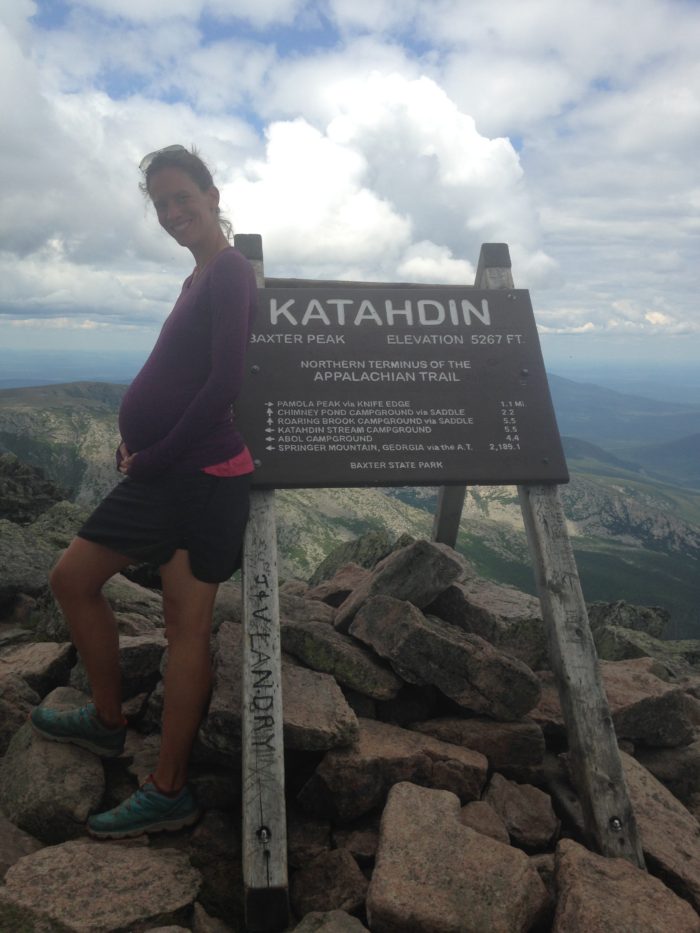 The next day, on our drive south, my husband and I stopped for a break in Freeport, Maine. I was excited to scope out the LL Bean Store and my husband was looking forward to visiting Maine Beer Company. When we arrived at the tasting room my husband ordered his drink and then turned to me and asked if I wanted anything. I looked at the bartender and ordered the lowest ABV beer on the menu. The bartender returned with one pint.

The woman behind the counter served my husband, but refused to serve me because I “looked pregnant.” So I turned to her with all the rage of a woman hopped up on hormones who had just spent the past week with a group of teenagers in the backcountry, and I said, “I am pregnant. And my decision to enjoy one or two drinks a week during my third trimester will be determined by my husband, our doctor, and me. It’s not up to you!”

My husband turned to me and asked, “We don’t get to stay, do we?”

Tackling a long-distance hike as a family, climbing Katahdin, or having a low-ABV beer in your third trimester is a personal decision that needs to be weighed deeply and discussed in depth by the family and with a family doctor. It shouldn’t be dictated by societal norms or discriminatory rules. And when and where family adventure is restricted, it deserves better answers than “that’s how it’s always been.”

I commend the Crawfords for turning around as a family at treeline on Katahdin. In doing so, they demonstrated their care as parents. They were unwilling to exploit their youngest child and turn him into an unwilling and unknowing activist. Katahdin is an incredible place. Its name is translated as “the greatest mountain,” but it’s summit—or lack thereof—does not define an Appalachian Trail thru-hike. Especially when you travel 2,188 miles to reach her crest and are told that you don’t belong there.