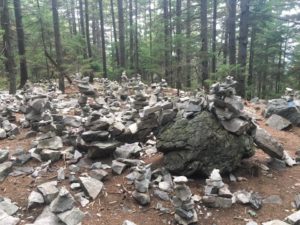 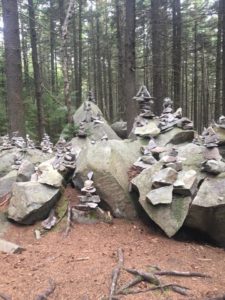 I had a delicious breakfast of eggs, bacon, home fries, and fruit at the Perry house in the morning. They dropped me off at the trail head , we said our fair wells, and I was off again. The first mountain kicked my butt because I was heavy after my latest resupply (I’d packed out two ears of fresh corn curtesy of Doris). As I was getting up from a break another hiker named Bean arrived and I decided to walk with her. We went at a nice steady pace for a few hours before finally stopping. Along the way we saw a really elaborate cairn garden with an AT symbol in it. I only had a few more miles planned out that day and was sure I’d make it to my destination. I ate lunch at a lovely lake and was gathering everything up when I realized I was itchy again. I tried to hike but I had to stop every thirty seconds to itch. I stopped at a shelter where I could rub on some anti-itch cream. The cream didn’t work but a day hiker had Benadryl spray which I tried out. The itch went away but as I hiked on I became extremely drowsy. I got to a shelter two miles short of where I was heading and decided to call it a day. No one else was there, it was going to rain that night, and I had a secure dry place to stay. I ate my corn with dinner and waited awhile for someone else to show up but no one ever did. So I curled up in my sleeping bag before the sun set and drifted into a long sleep.

Waiting out the Rain

I woke up to rain and decided to sit securely in my sleeping bag until it stopped. It started dying down and I began to pack. I had walked only a mile and a half when I felt the wind blowing and knew storm two was about to happen. Luckily, I was right next to a shelter so I stopped for an hour to wait out the second downpour. I was just leaving when I ran into one of my old NOBO friends, Goose. He had started the AT the same day as I had and like me has been taking his time on the trail because he likes to have a good time. We hung out for an hour and then I continued on. My options for the day had been big miles or very short miles because of a long dry stretch. With all the distractions I knew I wasn’t going to make the big miles so I relaxed for the rest of the day enjoying the sun that had popped up. I got to Peru shelter and only one other man, Tom, was there. He was doing the Long Trail to practice for the AT and I had fun telling him stories as we enjoyed the fire. I had a bigger day planned the next day so I went to sleep early again.

In and out of Manchester

I was feeling motivated the next morning and got a super early start. At the first view point I talked to my mother about getting winter gear shipped (it had been a cold night). I ran into some more NOBOs on my way up and then enjoyed a beautiful field on top of a ski slope. There was a man foraging for mushrooms and an AT hiker who was going from Canada to the Florida Keys (both very interesting). I headed down the hill and ran into Dugood and Midday again and walked the last mile to the road with them. Just as we arrived at the parking lot a pick up truck was leaving. I asked the driver if they were heading to Manchester and she said yes. I then asked if I could hop in the back and she asked me where I needed to go and I responded with “a grocery store”. I hopped out and thanked them when we arrived at Price Chopper-Grocery. After grabbing some extra food I headed over to a local pizza place where I got a calzone, beer, and icecream. I’d been in town for exactly an hour and a half and headed to the road where I threw up my thum. The fourth car that passed stopped ahead and it was a family who’d been at the pizza place and they were heading back past the trail. I thanked them for the ride, and hiked for half a mile before I ran into Dugood and Midday again. They had a fire going and I decided to camp with them that night. We stayed up past hiker midnight chatting about nonsense before finally falling asleep.

I woke up really sad for no reason early in the morning and didn’t want to move. I slowly gathered my stuff and hung with Dugood and Midday. I finally left close to noon and slowly drudged up the trail not feeling my best. I realized why some people refer to Vermont as “Vermud”; the trail ran through pure mud at times. As the day wore on my whole body seemed to ache and the book on tape I was listening to wasn’t cheering me up. I stopped at a beautiful view and ate lunch there trying to raise moral. It worked for a little but I was still dragging so I decided to call it a day early at a footbridge. I figured this way I’d have a goodnights sleep and hopefully wake up happier. 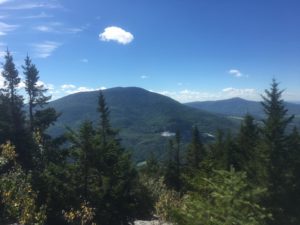 It was supposed to pour later in the afternoon so I woke and left early. My goal was to get to the top of Stratton mountain and down before the storm. I hiked fast and was pleased to have a view from the fire tower on top. This mountain is special because it is the place where Benton Mackey thought up the Appalachain Trail. I headed down the mountain and walked fast so I could camp before the rain, but it never came. By 3 I’d walked a lot and didn’t want to push on so I set up in a shelter with a few more folks. It was a lucky decision because the rain came half an hour after I arrived. There were at least 6 people staying there which was more then I’d seen in awhile so it was nice socializing that evening. 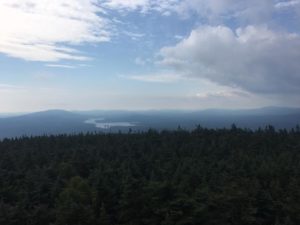 It was super chilly the next morning and I could not gather enough courage to get out of my sleeping bag for the longest time (others in the shelter had similar problems). As soon as my down jacket was packed I started walking to warm up. The terrain was some of the easiest I’ve experience so far and made it to the next shelter early. There was a beautiful view there and I ate an early lunch in the sun. I headed out and didn’t stop till I got to a fire tower which had one of the best views I’ve had this far in Vermont. The shelter was just a bit further on and a really nice one (porch and all). There were a few people doing the long trail there and to my surprise two NOBOs. We ended up having a campfire that night because it was super cold. 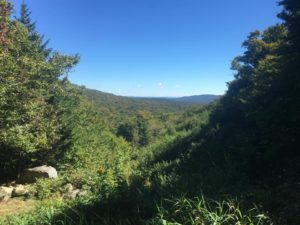 View from the Shelter

It was super cold for the second morning in a row and I left on my down jacket and leggings. I kept crossing paths with two woman named Julie and Alison who I’d seen at the past two shelters. The three of us arrived at the road at about the same time and after a few minutes of trying to hitch they told me their brother was coming to pick them up and could give me a lift as well.
When he arrived and they were discussing where to drop me off he said, “your looking for a bed? We have one more!” It was settled, I’d stay with them in town. We did laundry and then headed to the grocery store where I resupplied. We capped the night going to Madison Brewing Company which had a stellar watermelon beer and good comfort food. I had a lot of fun mingling with the three older siblings and watching the brothers reaction to all of our stinky gear.