I’ve read a lot of advice suggesting that it’s not necessary to send yourself mail drops for food on the AT except in a few particular spots because there are plenty of places to buy it along the way, and I’m sure that’s a good strategy for many people. However, as someone who’s 40 years old with particular dietary preferences that don’t include candy bars and pasta sides, I’ve decided to prepare all of my food in advance and have my partner, Ginger Dragon, ship it to me. It’s an intimidating undertaking.

In a general sense, I consider myself a planner, but when it comes to food I don’t tend to plan much past the current day.  I’m not at all the kind of person who plots out weekly meals ahead of time, so planning six months of food all at once is something I have no framework for. My usual routine is to go to the Farmers’ Market every Saturday and get whatever looks good, then pick up the rest of whatever I decide to make with my veggies on any given day when I walk past the local co-op grocery store on my way home from work.  (What can I say, living somewhere with excellent access to local produce has spoiled me.)  So, instead of driving myself crazy trying to do meal planning for everything all at once, I came up with a strategy that would allow me to adapt making trail meals to my style of food preparation. 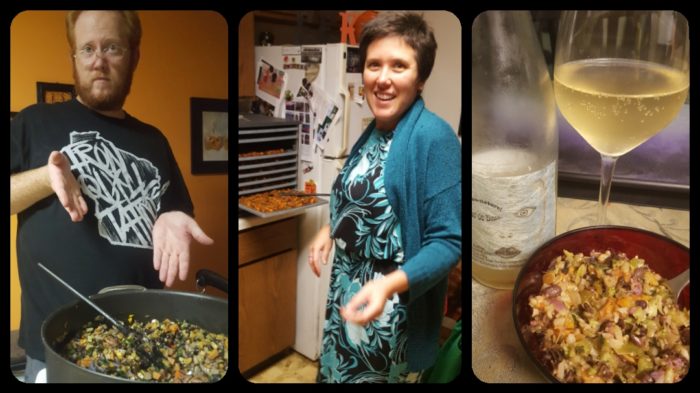 I started in August, when the Farmers’ Market was full of all the fresh produce I could possibly desire.  I realized that since I had more than 6 months before I left for my thru-hike that if I could dehydrate one week’s worth of dinners every week or so until I left, I would have what I need by the time I leave.  One night a week, my Ginger Dragon and I get out my largest pot and make a whole lot of dinner, enough for 10 servings so that there will still be 7 left after he and my Sweetie and I have eaten.  It’s a very time-consuming process due not only to the large quantities of vegetables that need to be chopped, but also to the fact that they need to be cut up much smaller than normal. 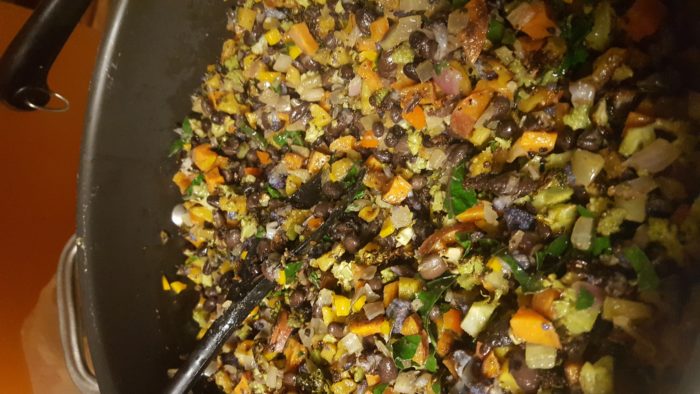 Cutting veggies into small, even, pieces is the key to dehydrating your dinners.  Other than that, I just cook the same sorts of things I normally cook with all of my favorite veggies.  I tend to do a lot of things that could generally be classed as chili or curry, but I’ve also been very happy with how ratatouille and a borscht-like stew turned out. 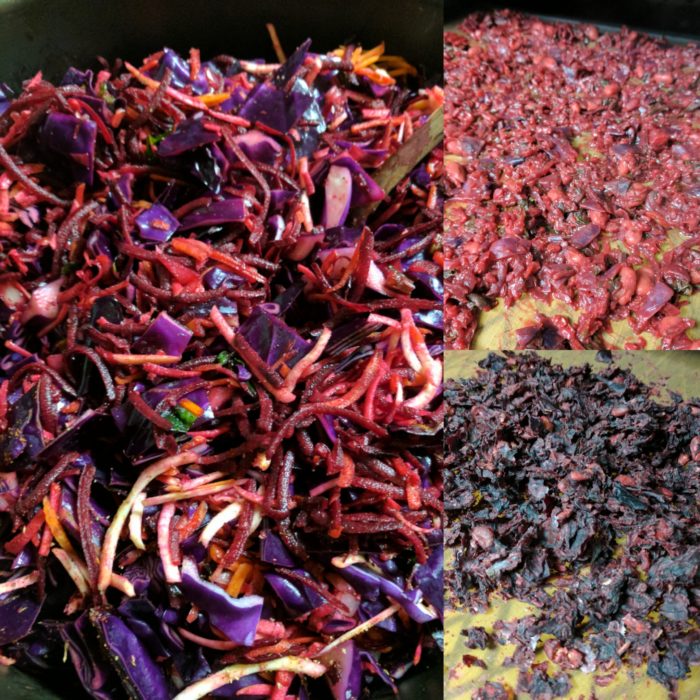 As of yesterday, we have 15 partly-full gallon bags of dehydrated dinners stored between our two freezers.  It’s really exciting to have more than half of my dinners for the trail made! 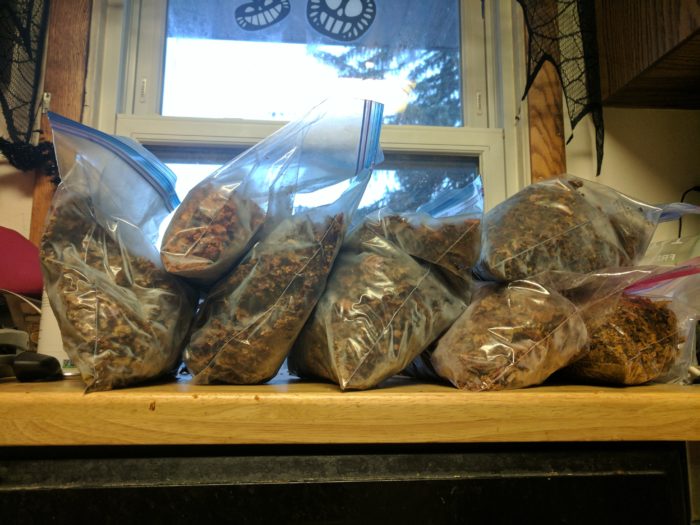 I highly recommend one who either really likes you or really likes cooking, because it’s a big undertaking and all they get out of it is a meal and some time with you.  I really don’t know if I would still be doing this week after week if it weren’t for Ginger Dragon’s help.  Every time I eat one of these dinners on the trail I can think of the time we spent together making them.

Meat and veggies need to be dried at different temperatures and take different amounts of time, so whatever you’re cooking up a big pot of should come only from plants.  If you want meat with your dinners, you can cook and dehydrate it separately (you should also go easy on the oil- you can take additional oil packets with you on the trail to add some calories).   I eat mostly plant-based foods in my daily life and I’m planning to do the same for my hike with a little fish thrown in sometimes, so that makes it easy for me.  I generally include some kind of legume (I mostly use black beans, lentils, pinto beans, and chickpeas) and some kind of grain (I have used brown basmati rice, hulled barley, rice noodles, and millet) or quinoa.  I haven’t tried dehydrating tofu yet, but I’ll probably experiment with it before I’m done.

Include special ingredients from home 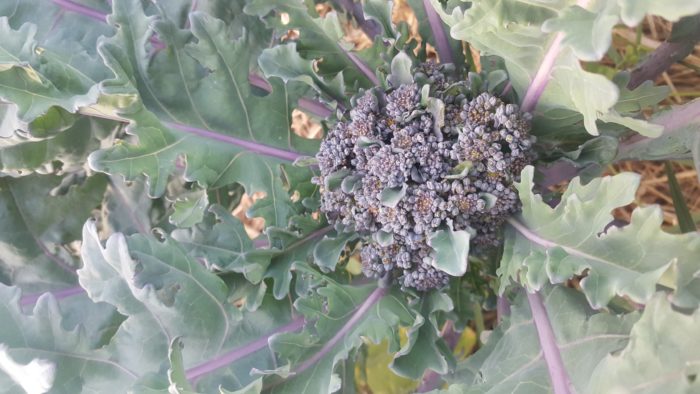 I used not only a lot of Farmers’ Market produce from my favorite local farms, but also broccoli, kale, tomatillos and garlic that I grew in my own garden.  Going to the Farmers’ Market with my best friend The Muffin Queen and gardening are two of my favorite things about summer that I’ll be missing next year when I’m on the trail.  When I eat these meals, I’ll think fondly of the market trips and garden visits that helped me produce them.  It doesn’t have to be just local produce, it could be a jar of a favorite restaurant’s salsa or a pasta you can only get in your area that goes into one of your dinners.

Certain foods, especially sweet potatoes, along with other root vegetables, and both summer and winter squash, dehydrate much better and faster when they are grated rather than chopped.  After doing it the hard way on a handheld microplane grater for months, last week we finally borrowed my friend’s food processor with a shredding blade and it was amazing how much easier it made grating up a whole bag of beets.  It is going to make the texture of your dishes different, but what we’re going for here is good dehydration and rehydration and the texture is going to wind up a little mushy compared to fresh no matter what you do.

Make sure you have space

Since these meals are being dehydrated months before they will be consumed, the freezer is the safest place to store them (we also put a pouch or two of food grade silica gel in each bag to protect against moisture).  15 weeks is pretty much what we’ve discovered the capacity of two freezers is for us since we still want to keep other things in there as well.  Ginger Dragon has a chest freezer we’re going to start using from here on out.

I don’t have a particular formula for how much water to add to any given dinner, I just boil what my Jetboil can handle and then add an amount that seems right to me.  I usually rehydrate for about 15 minutes and check on it partway through so I can add more if it seems necessary.  If you add too much, you have soup, which is still good.    Testing out rehydrating will give you a good idea of how much to put in a serving, and also a good idea of how much more delicious your homemade food is than the packaged brands.  Enjoy! 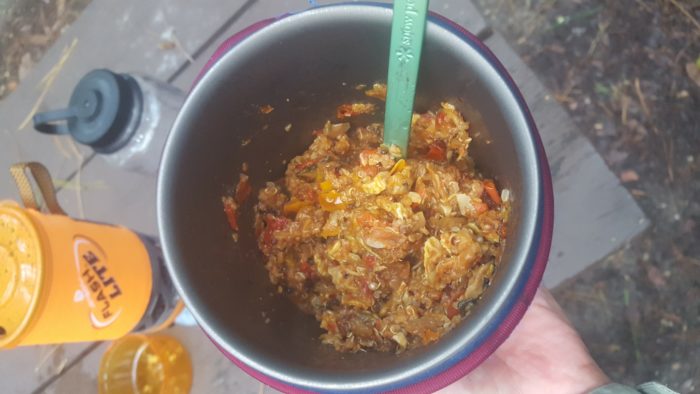