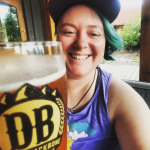 Curious about dropping pack weight with different gear choices? Peep the deets on how I eliminated pounds from my base weight!

I switched things out from five areas to streamline and save maximum weight. These categories include pack, tent, sleeping bag(s), sleeping pad, and cook system. A few gear upgrades were acquired recently and I haven’t tested them out yet, but I’m rolling with it and feeling confident. Read on to find out exactly what’s changed between 2015 and now. Plus, learn how I shaved eight to ten POUNDS off my base weight…yeahhh buddyyyyy! 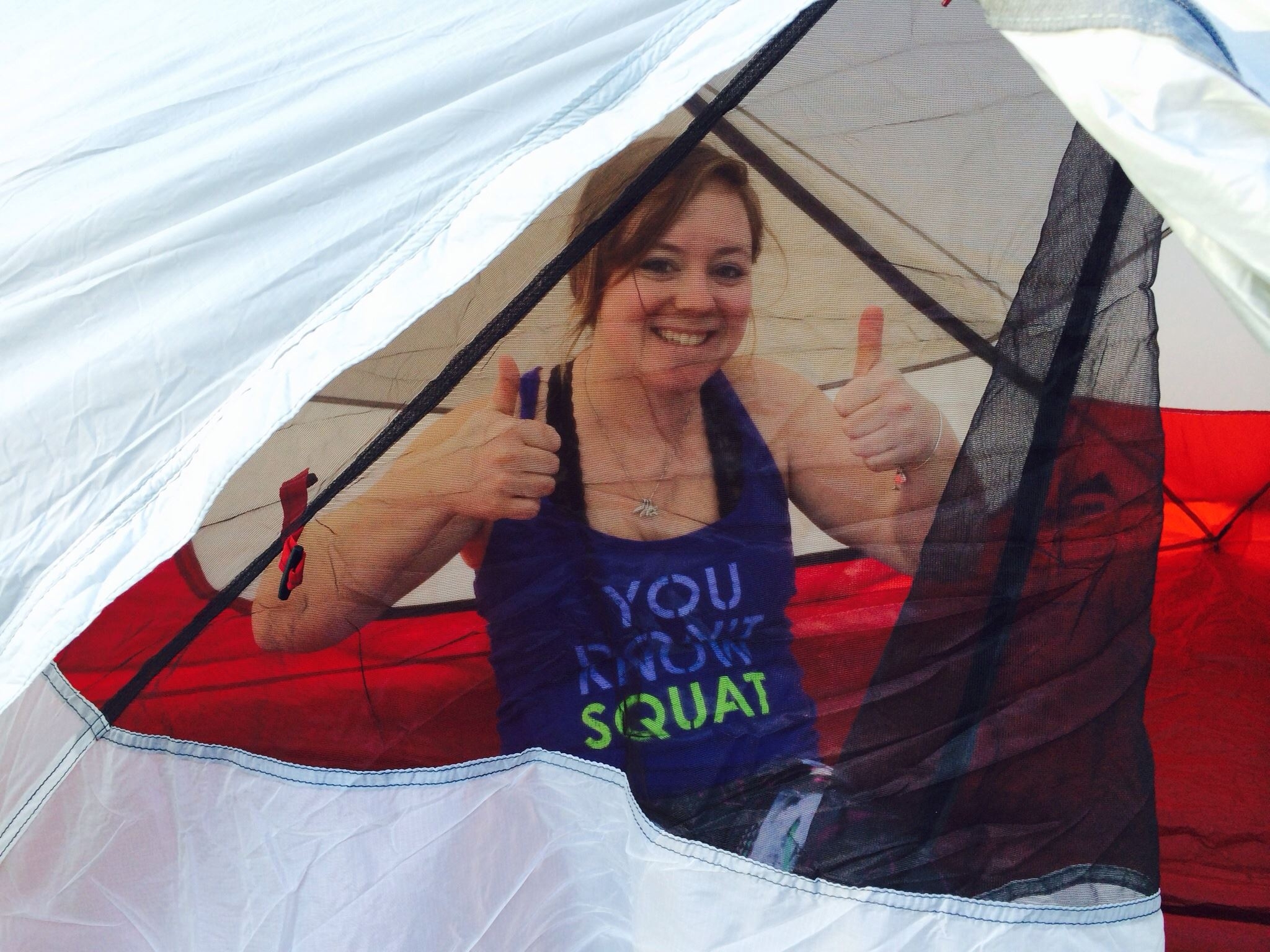 What a goober. Let’s do this!

All About that Pack Life

I’ve tried several packs since starting the AT in ’15 with my good ole Osprey Ariel 65L (comfy, over-sized, heavy). Out of desperation to cut pack weight when I flipped to Maine, I tagged in the Hyperlite 2400 Windrider. Ultimately unsuccessful, I struggled to fit enough food for longer stretches between resupplies. My back paid the price for my naivete with subsequent overloads and a very uncomfortable carry.

A few years later I found Superior Wilderness Designs (SWD), creating a customized Long Haul 50L pack. I’ve loved using this awesome pack, and it would’ve served me well in our initial plans for a PCT thru-hike. Switching plans to the AT, with the gear I have and our plans to resupply every few days, it has more capacity than necessary. Cue my final decision to go for the Mountainsmith Zerk 40L. This pack is in production currently, as a result of collaborative field testing and tweaking by The Real Hiking Viking, set to be mailed out mid-April. Can’t wait to get my little paws on it! 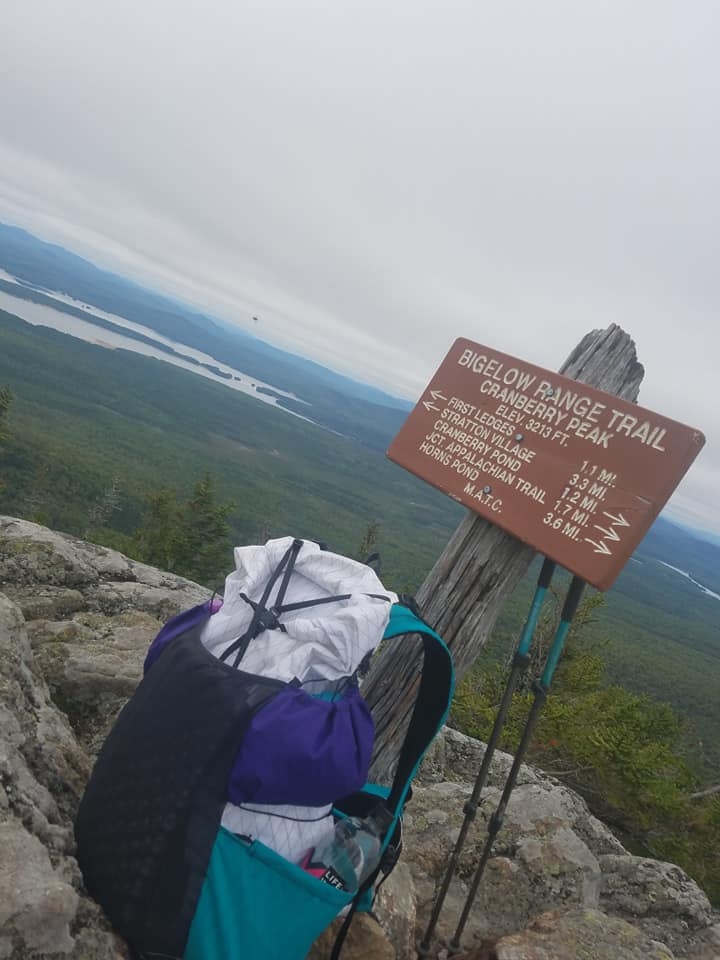 This is my SWD in slender day hike form — also an over-qualified back-up in case the Zerk doesn’t work out for some reason.

The Home Away from Home

Let’s talk about tents, baby! So, in ’15 I carried the MSR Hubba Hubba NX two-person tent, which I shared with me, myself, and my gear. I particularly enjoyed extra space inside where I could explode my pack at night, chill for a bit, and pass the F out after a long day of hiking. While researching shelter options early on, I never really considered a one-person tent. The narrow tube-like shape always seemed slightly ridiculous. Also, I’d rather carry the weight of a bigger tent so my stuff can live inside with me instead of having to leave gear at the mercy of the elements and critters. 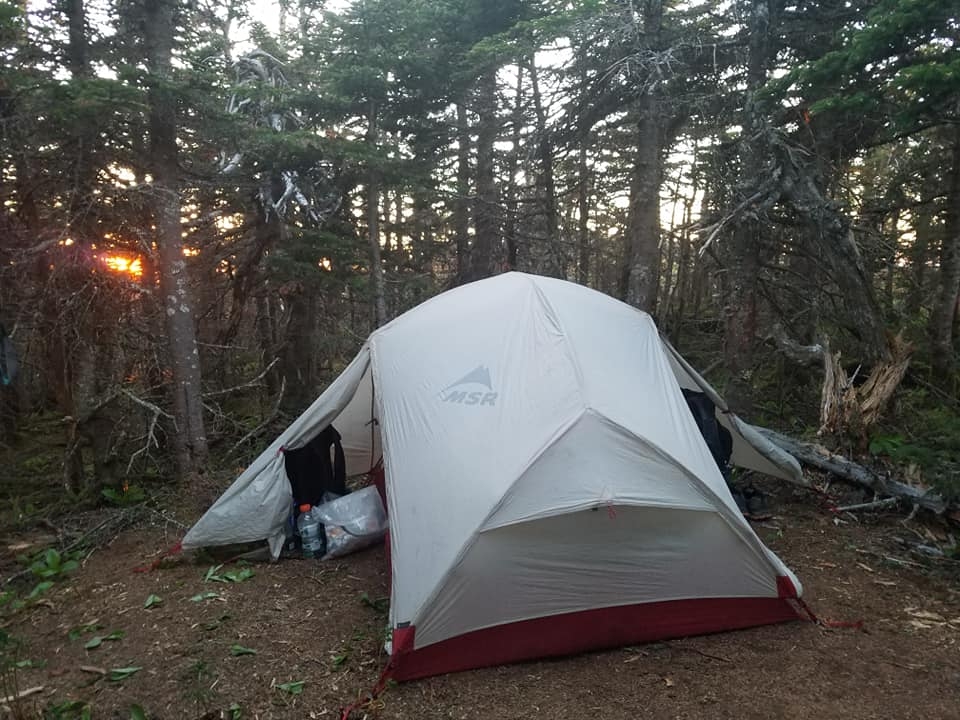 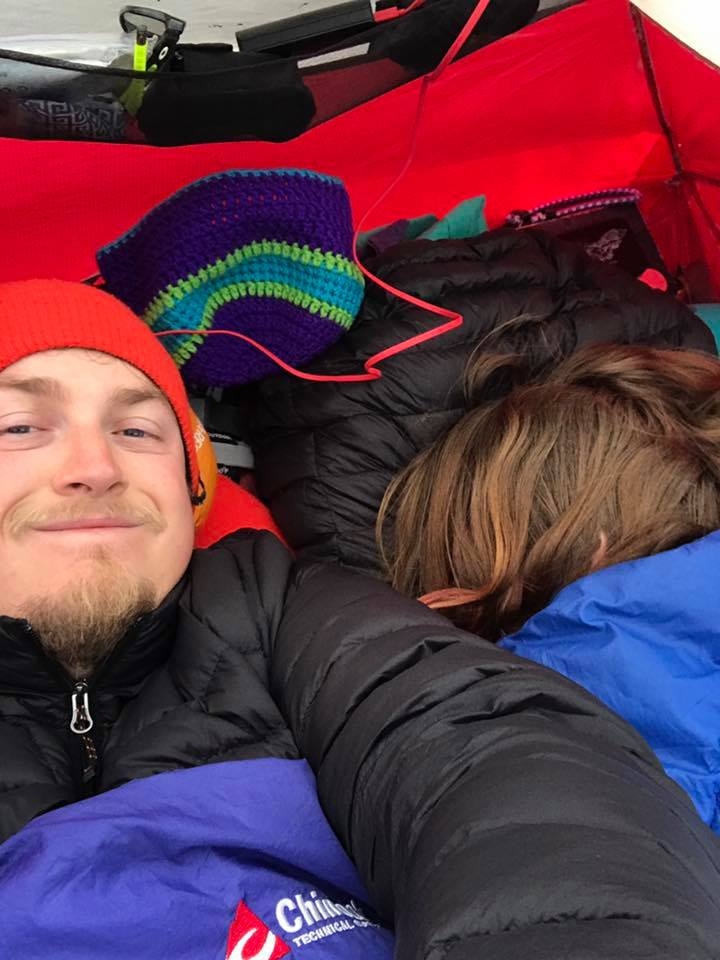 Like Jonah Hill’s Superbad character squeezed into clothes that are too small, this tent is way too tight….Photo cred: Garrett

From the outset of our relationship in 2017, Garrett and I have camped out a few times in my MSR tent, though we quickly realized space was seriously limited with us both inside. Gear ended up shoved at our feet, by our heads, and in the two vestibules. Investigating some other tents led us to the LightHeart Gear Duo, another two-person tent that weighed less and had more interior square footage than the MSR while also being reasonably priced.

Initially finding a lot of love for the Duo and hopes of taking it on the AT this year, a few overnights and a 40+ mile shakedown on the Arizona Trail (AZT) proved that it would not be an ideal setup for a thru-hike with both of us and our gear tucked inside.

The material of the tent, ripstop nylon coated with silicone, retains moisture rather easily. A consequence of this is a heavier carry and a potentially soggy place to sleep if we were unable to dry it out during the day. Excess condensation on the interior walls also became a deal-breaker when we woke up to dank down sleeping bags/quilts each morning, a big no-no since down loses its ability to preserve warmth when wet.

Being quite familiar with the dampness of the east coast and the AT overall, I pushed for finding another tent option that was larger and could stand up to increased weather demands, and Garrett agreed. Not today, hypothermia! 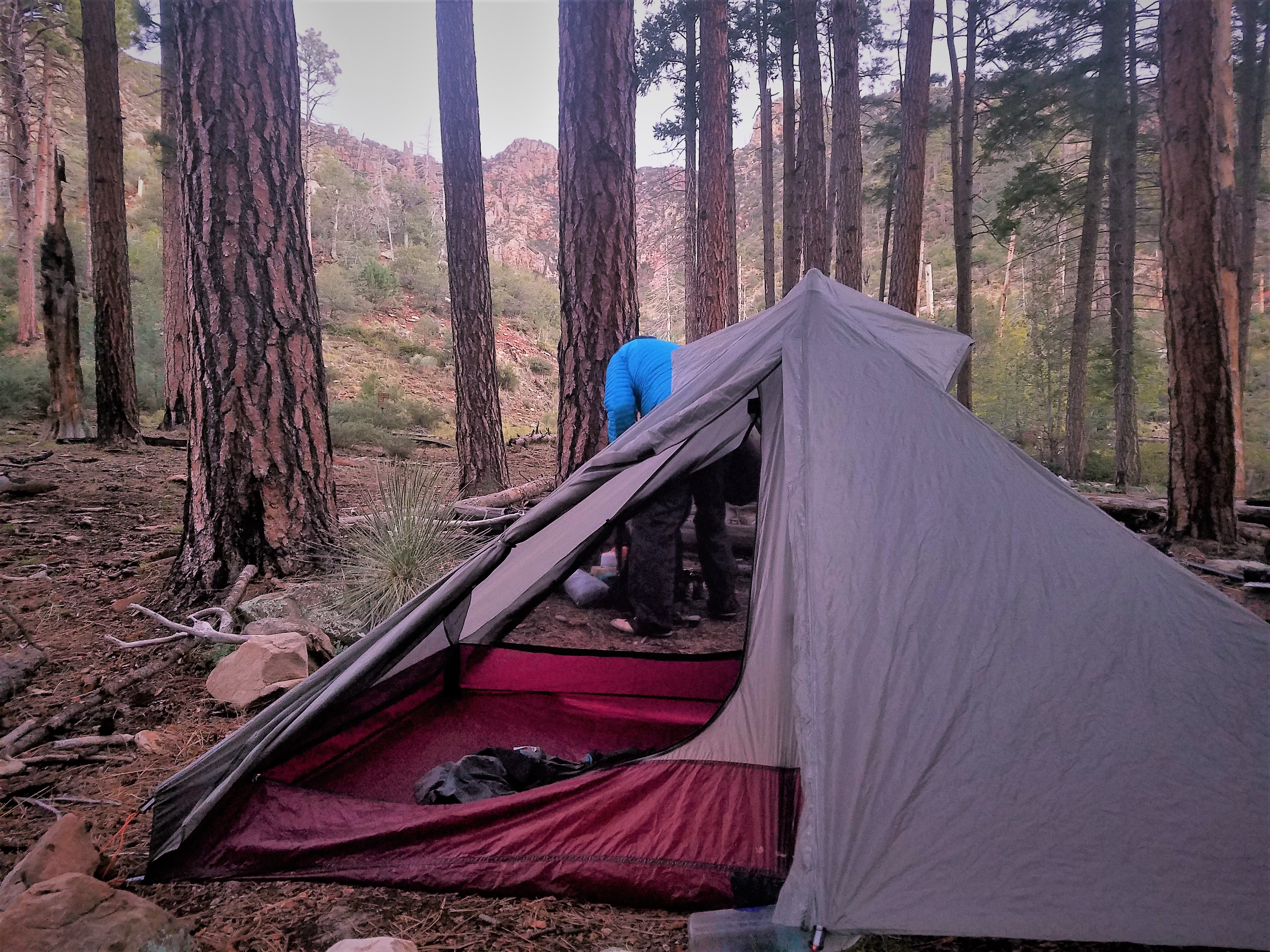 Close-up view of the LightHeart Duo on the AZT.

This leads to our new-in-the-stuff-sack tent – the Zpacks Triplex, a freaking waterproof woods castle if I’ve ever seen one. Unable to set this thing up due to the Maine tundra outside (our dirt driveway is frozen and several feet of snow border that on all sides…), I cannot wait to get going with it on the AT! A three-person tent larger than anything we’ve used before, we’re expecting ample space for us and our gear. (And of course, room to throw down with some rummy tournaments, ’cause we all know that’s really why hikers go to the trail for months on end!)

The Triplex consists of Dyneema composite fabric, a naturally waterproof material that sheds rain and condensation (a mesh screen between the tent wall and bathtub floor allows interior condensation to run out instead of pooling on the floor). The last big draw for this tent, aside from the size and material, is that it only weighs 22.5 oz., or 1 lb., 6.5 oz., which saves us over a pound from the LightHeart Duo, and about two and a half pounds from my MSR Hubba Hubba NX.

**Important financial sidenote: Garrett and I dog-sat over the past year and a half for a German Shepherd named Apollo. We put aside all money raised from watching him into a separate hiking fund for joint lodging/meals/transport/etc. while on the trail. In considering the Zpacks Triplex, we struggled to decide due to one teensy tiny detail…this tent costs $700 – HOLY SCHNIKES!! The main reason we finally bit the bullet and snagged it was the fact that we had this little fund going on the side, so neither of our shabby seasonal job bank accounts took a hit. 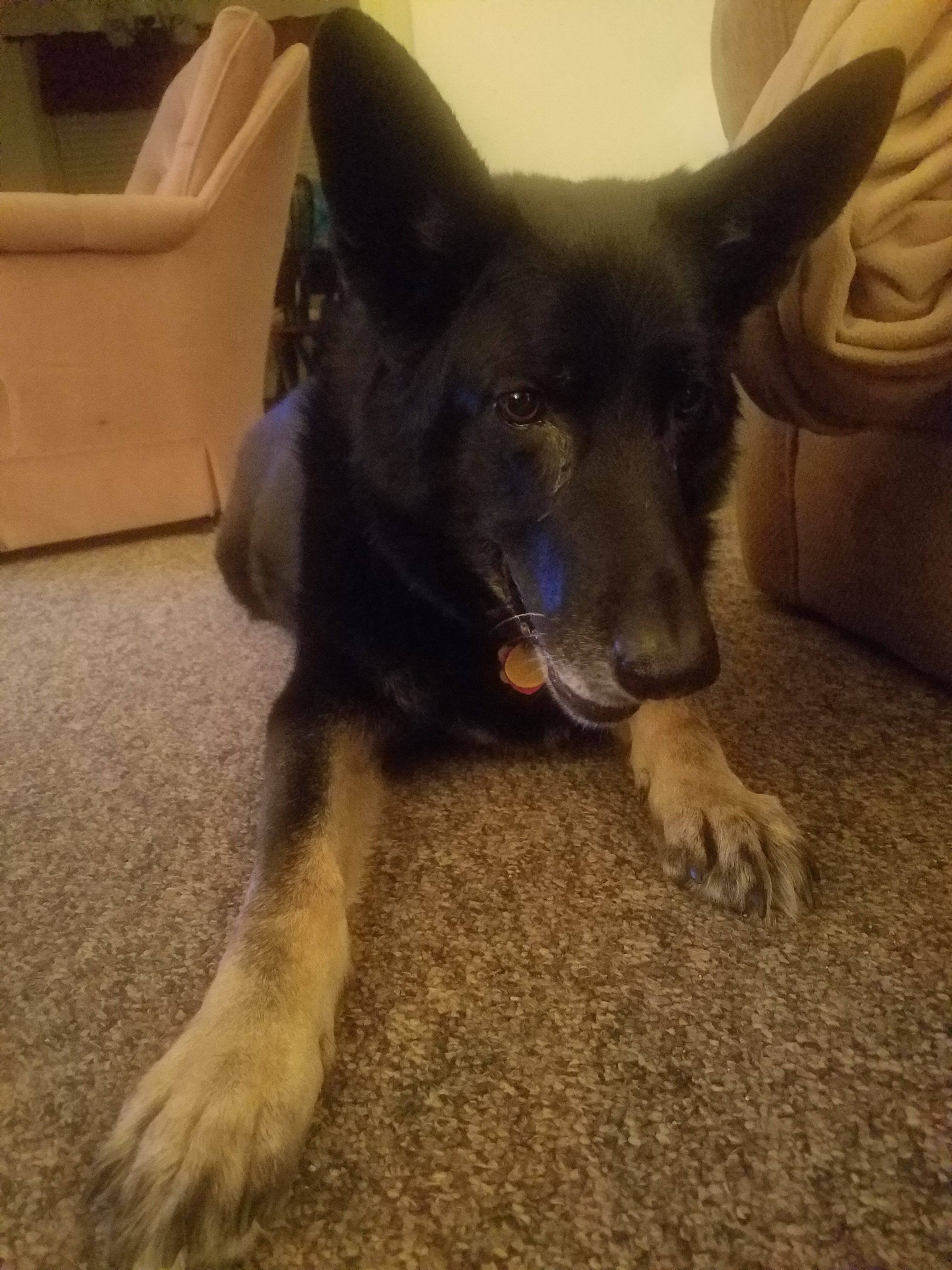 This is Apollo. Thanks for helping us out on the AT buddy!

A good sleep system in the wilderness or on any camping adventure is priceless – gotta get the zzz’s to get the smiles and make the miles! Going for comfort in 2015, I settled on some items that worked but weren’t really suited for keeping up with lightweight gear trends. (Shocker, I was a total noob back then! Research gets you out there, but field experience is paramount to learning what works on a personal level.)

My backpacking endeavors launched with the Big Agnes Q-Core SL sleeping pad and Big Agnes Lulu 15-degree synthetic bag. The Lulu lacks any fill material underneath, instead utilizing a sleeve on the backside where a pad slides in for insulation against the ground. Semi-worried about rolling off of my sleeping pad, I thought this combo would eliminate that concern. It did, though eventually I got tired of blowing up the pad. Out of curiosity I switched to a closed-cell foam pad, the Therm-a-rest Z lite Sol. Less cushion underneath me as a side sleeper led to some resultant cold nights and sore hips. Can you say struggle bus?

During warmer months I became frustrated with the Lulu 15-degree, and in Damascus, VA, snatched up a Montbell Burrow #5. This 40-ish-degree synthetic bag lightened up my base weight a tad and didn’t make me sweat at night. (Must’ve skipped over a warm weather bag in my preparations, whoops!)

Holy cow, anyway, I learned my lesson and returned to an insulated, inflatable pad option this time around. The Therm-a-rest Neoair X-Lite keeps me toasty and comfortable, plus the women’s version weighs less than both the Q-Core SL and the Z Lite Sol. The only minor issue I encountered happens while lying on my back on the Neoair – my arms want to slide off the narrow, mummy-shaped pad. Not a deal-breaker since I either side-sleep or burrow down on my stomach when chilled. Plus, I haven’t fallen off the pad in my sleep yet…WINNING! 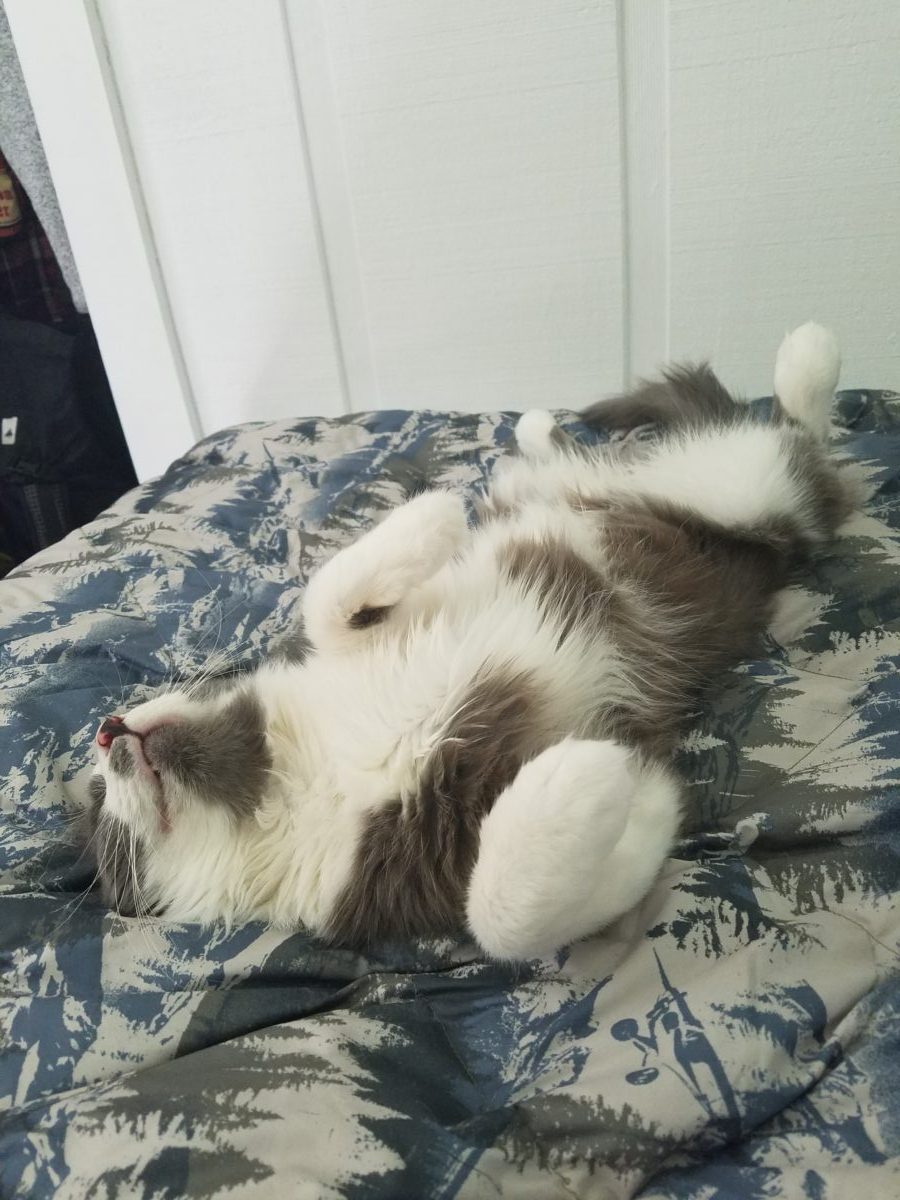 If only sleeping in the woods was this easy….(I don’t have any pictures of my sleeping gear, so you get to see my cat Quill instead!)

Strapped to the Neoair pad will be an Enlightened Equipment (EE) Enigma 10-degree down quilt for colder climes, or an as-yet-untested EE Apex 40-degree synthetic quilt for warmer months. The Enigma encourages a mini learning curve as you adapt to key differences from a more conventional, mummy-style bag. You’re not fully encased as with a bag, but rather lay underneath it like a blanket, using a sleeping pad as insulation from the ground.

Backpacking quilts nowadays have many features you can customize, such as temperature ratings, down or synthetic insulation, enclosed foot box or non-enclosed foot box, etc. Quilts also tend to weigh less than traditional bags due to less overall material.

I chose the Enigma primarily for its enclosed foot box. I’m a cold sleeper and my toes freeze when it’s drafty down there, yo! To combat heat loss from my head I’ve added a Goosefeet Gear down balaclava for those colder nights. Totally worth it since it only weighs between one and two ounces.

When initially investigating camp kitchens, the variety and options out there seemed intimidating. I still have no desire to try out an alcohol stove or Esbit tabs. Finding happiness with a simple setup, I went with the Jetboil MiniMo for my 2015 hike. With an easy attachment of cook pot-to-stove-to-fuel canister and fast boil time with simmer option, I was hooked. This was an awesome little camp cooking apparatus, and I have nothing bad to say about it. The only reason why I’m changing it up is the weight factor. 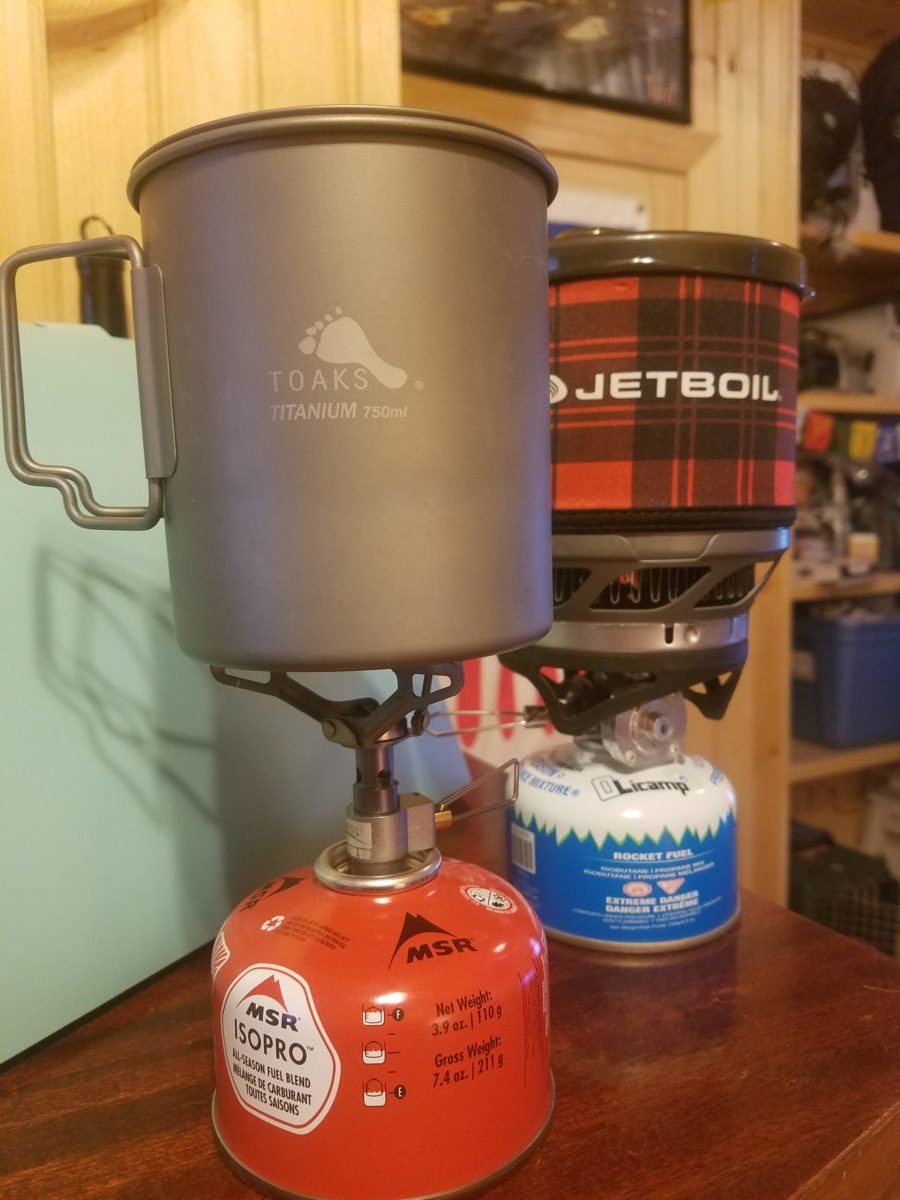 I’ve used a combination of the TOAKS 750mL titanium pot, tiny BRS 3000T titanium stove, and canister fuel over the last year or so. The 750mL pot seems a bit on the small side for cooking meals in the pot itself. However, it works perfectly for boiling water I need to re-hydrate meals in freezer bags with an insulated pouch.

Look below to see totals for these gear swaps. I love seeing major poundage lost with my new choices! Totals only reflect the gear I’ve mentioned above. They don’t include other pack items like clothing, hygiene and first aid, electronics, food, etc. My numbers below for 2019 do not include the tent, as Garrett will be carrying it on this journey.

**Note: even carrying our tent, I’d still be saving between seven and nine pounds switching out these major items…SWEEEETTTT!**