Oh, hi, class of 2018! Notebook here. Congratulations on your decision to take the plunge and make a thru-hike attempt! That took a lot of guts!

One thing you might be wondering about is sheltering versus tenting, and hosteling versus hoteling, so I thought I’d put together a little guide to help you consider your options and decide what will be best for you. In Part I, today, we’ll discuss shelters versus tenting. 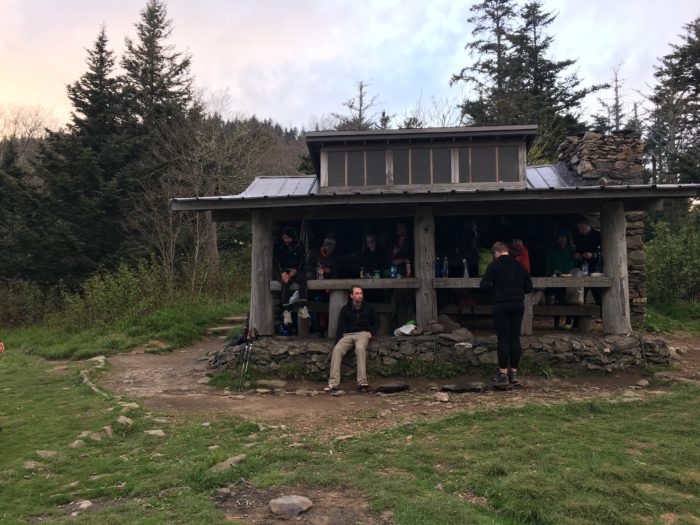 You have probably heard the rumors already or experienced yourself some of the less-savory aspects of shelter sleeping. Snakes! Snoring. Stench. Smoke. Spreading. Shouting. While I never encountered a snake in a shelter myself, I know people have. As for the other five, yes, yes, yes, yes, and yes. Let’s take them separately:

Inevitably, someone will snore. Earplugs are your friend. I know, I know, earplug sentiment runs strong: anti-earplug people “need to hear everything.” I.e. they need to hear any threat. If that’s you, I doubt I’ll change your mind. However, I will ask you to at least TRY it once or twice. You might find the improvement in your sleep quality is worth sacrificing a little (dubious, IMO) peace of mind. Usually (of course there are exceptions), bears don’t come into shelters, so if you’ve left your ears open to hear their approach, instead you’ll most likely hear rustling out there, which your imagination will turn into a bear but which is in all likelihood a deer, squirrel, or mouse. So you’ll not only lose sleep unnecessarily due to sound, you’ll lose it due to unfounded fears.

If you aren’t anti-earplug but rather simply don’t think they work that well, I encourage you to get the foam kind and to practice with them. There’s a trick to them. Here’s what you have to do. 1) Roll and compress them, one at a time, into little cylinders. Don’t rush this step! The more uniform the cylinders are the better the sound blockage will be. Take your time. As you’re doing this, the foam will warm up from the heat of your fingers, and this is important for full expansion. 2) Then, quickly grab the cartilage at the back of your ear and tug it away from your head to straighten your ear canal. 3) Insert. As soon as you stop compressing the foam, it will start to expand, so this might take a couple tries. Be patient. If needed, take the foam back out and re-compress. Try again. 4) Once you feel like the plug is in there pretty well, hold it there a few seconds so your ear doesn’t push it back out as it starts expanding and taking on the shape of your ear canal.

Okay, let’s address stench briefly (because there’s not much you can do about it). Yes, someone in the shelter will probably stink worse than you do. Given that you’re exhausted, though, this probably will be a minor unpleasantness more than a sleep-preventer. You can always flip your bag around so your head is on the opposite end of theirs (most thru-hikers sleep heads out). At least that way, you’ll be sniffing the outside of their sleeping bag, not the top of their greasy head.

If you’re a nonsmoker, you are most likely out of luck most of the time. Many smokers are considerate and smoke at least 25-50 feet away from the shelter, but most merely try to be considerate and smoke 5-10 feet away from the shelter. (I won’t even talk about the assholes who smoke in the shelter except to say: shame on you guys.) If you’re a smoker who isn’t an asshole, please believe me when I say that 5-10 feet doesn’t cut it. The smoke will blow into the shelter and make the nonsmokers miserable. They probably won’t say anything, but you are making their evening significantly worse than it has to be. 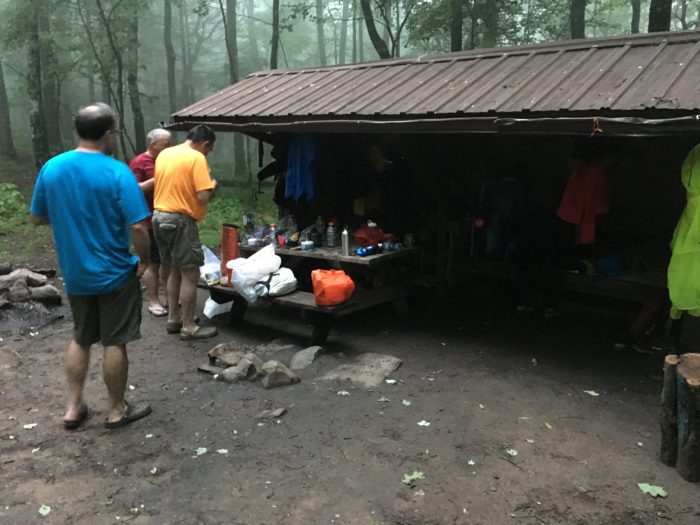 Some people (I’m looking at some of you, weekenders and section hikers) will spread their stuff all over the shelter and picnic table. You just have to be direct with them: “Hi, looks like there’s enough room for one (or two or three) more. Would you mind moving your things?” One time, I got pushback from a group of section hikers who said their two friends were on their way. I simply gave them an are-you-even-serious, bitchy-aggressive face from hell, and they started muttering and sliding their bags together to make room for Sunshine and me.

Okay, I said “shouting” for the fifth shelter inconvenience instead of talking because I liked the alliteration. But talking and other loud human-generated sounds are really the issue. People are on different schedules, and sometimes they aren’t considerate coming in late or packing up early. That really sucks, but, as with snoring, can be mitigated by earplugs. (I have found the are-you-even-serious, bitchy-aggressive face useful here, too.) Your air mattress and stove and backpack are going to make noise; they’re not that controllable. Your voice is. Keep it down if it’s late (past hiker midnight, i.e. 9 p.m.) or early (before 7).

By the way, I’ve heard lots of thru-hikers complain about early risers, even when the risers aren’t talking. I disagree with this. Everyone’s allowed to come in as late as they want or leave as early as they want; we all have different circadian rhythms. Packing stuff up (or unpacking) makes noise you can’t do anything about. Again: earplugs.

Shelter sleeping isn’t all trouble, though. It’s certainly a lot easier—and faster—than setting up your tent, plus there’s a feeling of camaraderie and a chance to socialize. In the rain, of course, it’s pure money. 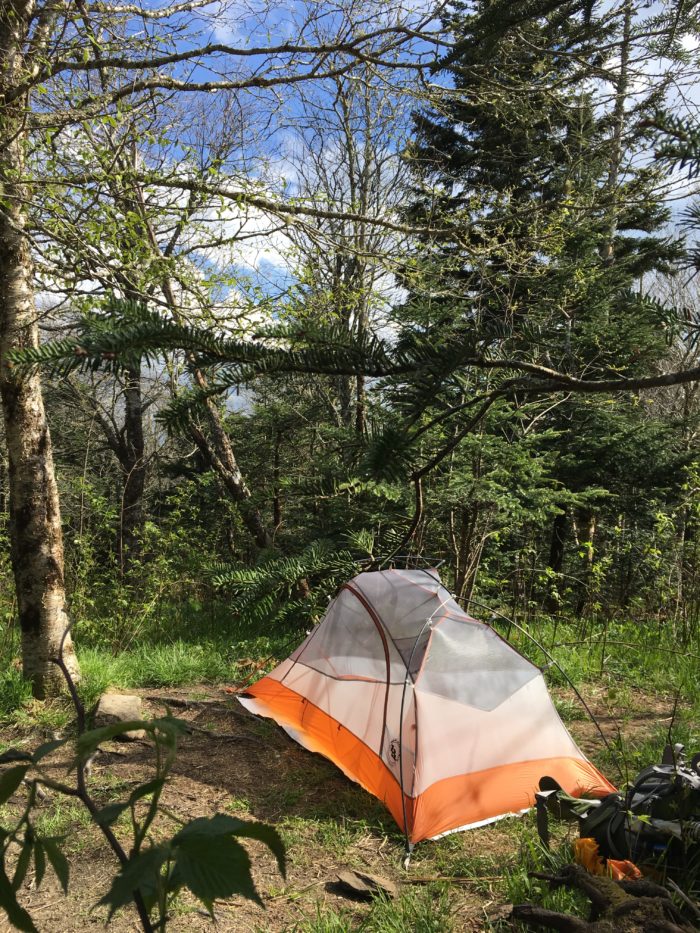 Me, for all the negative reasons described above, I loved the tent life. Even though I was lonely on the trail all afternoon, after a little chit-chat over dinner and across the evening, I was ready again for privacy and solitude. I even chose on several occasions to tent in the rain when ample shelter space was available, because my air mattress is especially noisy, I got up especially often to pee, and I liked to get an especially early start in the mornings. Trying to minimize my noisemaking to be considerate of my bunk mates usually made for a poor night’s sleep for me, so I mostly picked tenting.

Naturally,  though, tenting does have some disadvantages.

You will need to find a flat spot to set it up, and if you tend to arrive at shelter sites on the later side, you might be out of luck. Sleeping on a slant is no fun. I tried stuffing clothes and shoes under one side of my air mattress to stop myself rolling off, but this really doesn’t work. Really, the best you can do on a slope is orient your tent so the slope flows down the length of your body. I found it easier to put my pack under the end of my air mattress to even things out somewhat, stop myself sliding down, than to stop rolling off sideways.

Of course if it rains, you will have to carry extra weight in the form of water the next day (and possibly for a few days—at least until you have some sun and time to hang it out in. Trust me when I say this can be demoralizing AF. And it’s not just water, but leaves and duff sticking to your tent, and mud. UGH.

Sleeping in a tent doesn’t negate all the disadvantages of sheltering—depending how far you set up from the shelter and other tents, you could wind up still dealing with snoring or other human-generated sounds, and of course, if you forgo earplugs, you’ll still hear that rustling.

But tenting is generally considered warmer than sheltering—especially if your tent is tiny, because that thin film of material does block wind and trap some of your body heat—great in the early and late months. Of course, this means it’s also hotter than sheltering, when the threat of thunderstorms makes leaving your rain fly off a dicey proposition—not so great in July and August.

A tent can also be a great source of comfort—your packable home—on the trail. You’ll develop little setting-up routines, your mesh pockets where you keep things, your pen and journal right there, your electronics in arm’s reach and in no danger of being knocked off the shelter deck into a mud puddle. It feels homey.

I hope this has given you some helpful insights about what’s in store for you out there! As with any thru-hiking decision, it really depends on you and your priorities and habits. If ease and speed are important to you and you can sleep through almost anything—shelters are your way to go. If you don’t mind working a little bit for privacy, solitude, and comfort—it’s tents all the way.

Tune in next time for a post about hosteling versus hoteling!