We woke up earlier than usual because today was a town day. It rained a little early this morning, and it was the first time I’ve heard the pitter patter against my tarp while cozy inside my hammock. Rash and I had shared a dead tree for our hammock, and I was glad it didn’t fall over on us overnight. We left the campsite and got on the trail before 8, and I was feeling good hiking in the morning. The weather was beautiful. It was slightly warm with the occasional peek of sunshine.

The morning hiking went by nicely with the 3 of us talking and laughing. My headphone were in my puffy jacket pocket buried in the bottom of my pack in the dry/compression bag, so I played music and listened to The Moth on speaker. We stopped for lunch, and as we were leaving I got a call from Louis that they found my stolen computer at a pawn shop. It was wiped but all in one piece, and I was so relieved.

We stopped for water at a semi stagnant stream, and I thought about skipping it because it looked questionable, but I was completely out of water. I took the risk, and figured if I get sick in the next few days I’ll know where I most likely got it from. I played an episode from My Brother, My Brother, and Me (a podcast recommended by Van Grizzle) and Rash and I laughed hysterically as we hiked along.

The hike was going smoothly despite the varying sizes of rocks embedded in the trail. We were excited to go into town and see Rash and Piñata’s mom, not to mention get a shower and eat real food. Around 3 miles before town, the rocks became bigger and more prevalent. We were climbing over seemingly never ending boulder fields intermixed with small fields of rocks. The small rocks felt like knives going through my shoes, and trying to balance on the boulder fields made my knees feel like they were going to break. 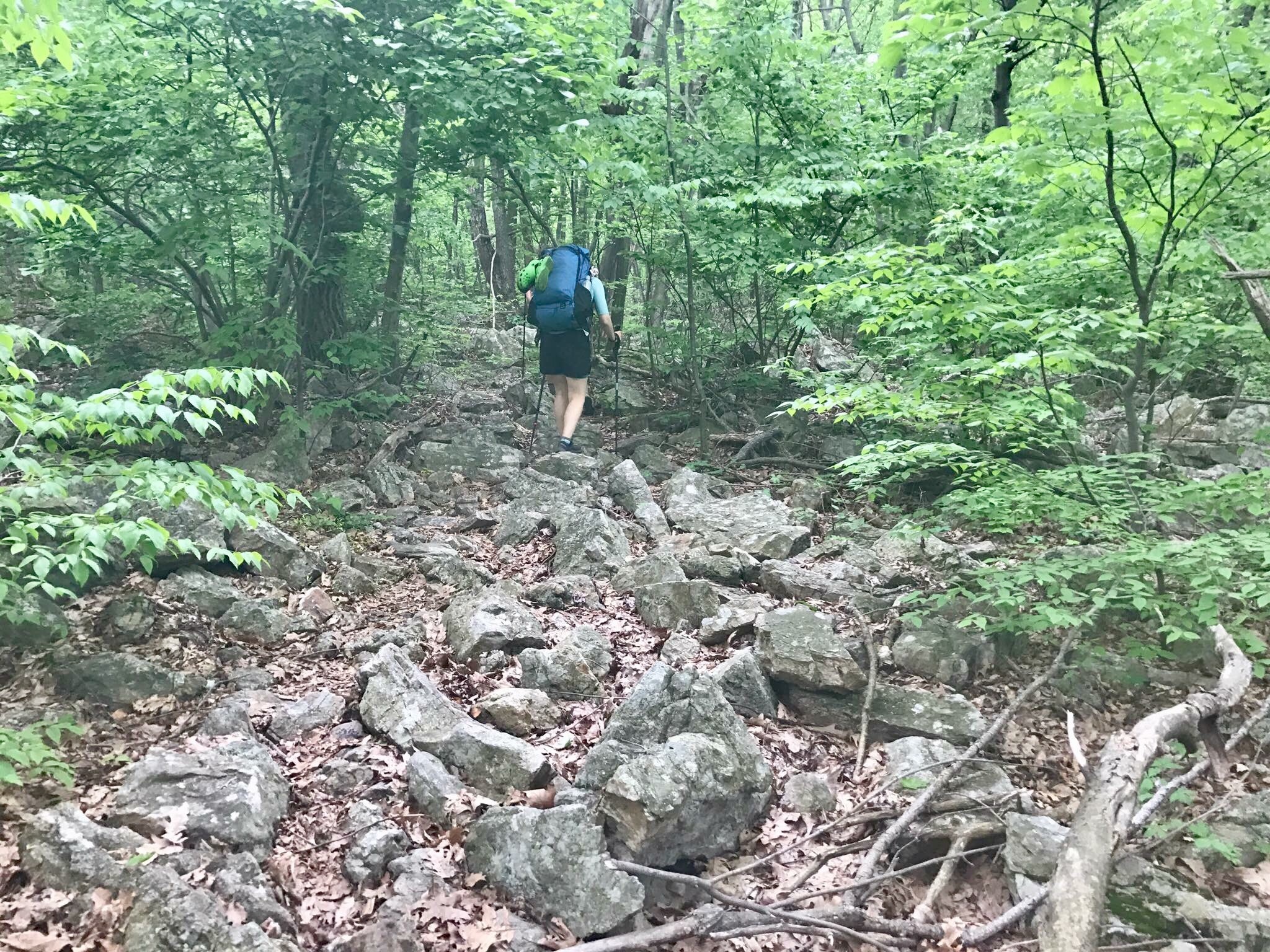 Even though we were so close to town, we had to sit down to give our tired feet a break. When we continued, we went down the steepest part of the trail I’ve seen yet. It was 0.7 miles of steep descent that was almost comical it was so steep. I can’t imagine the SOBOers trying to go up the hill. If our knees didn’t feel like they were broken before, the steep descent did them in. The combination rocks and steep hills really did me in. I was sore all over and very tired. 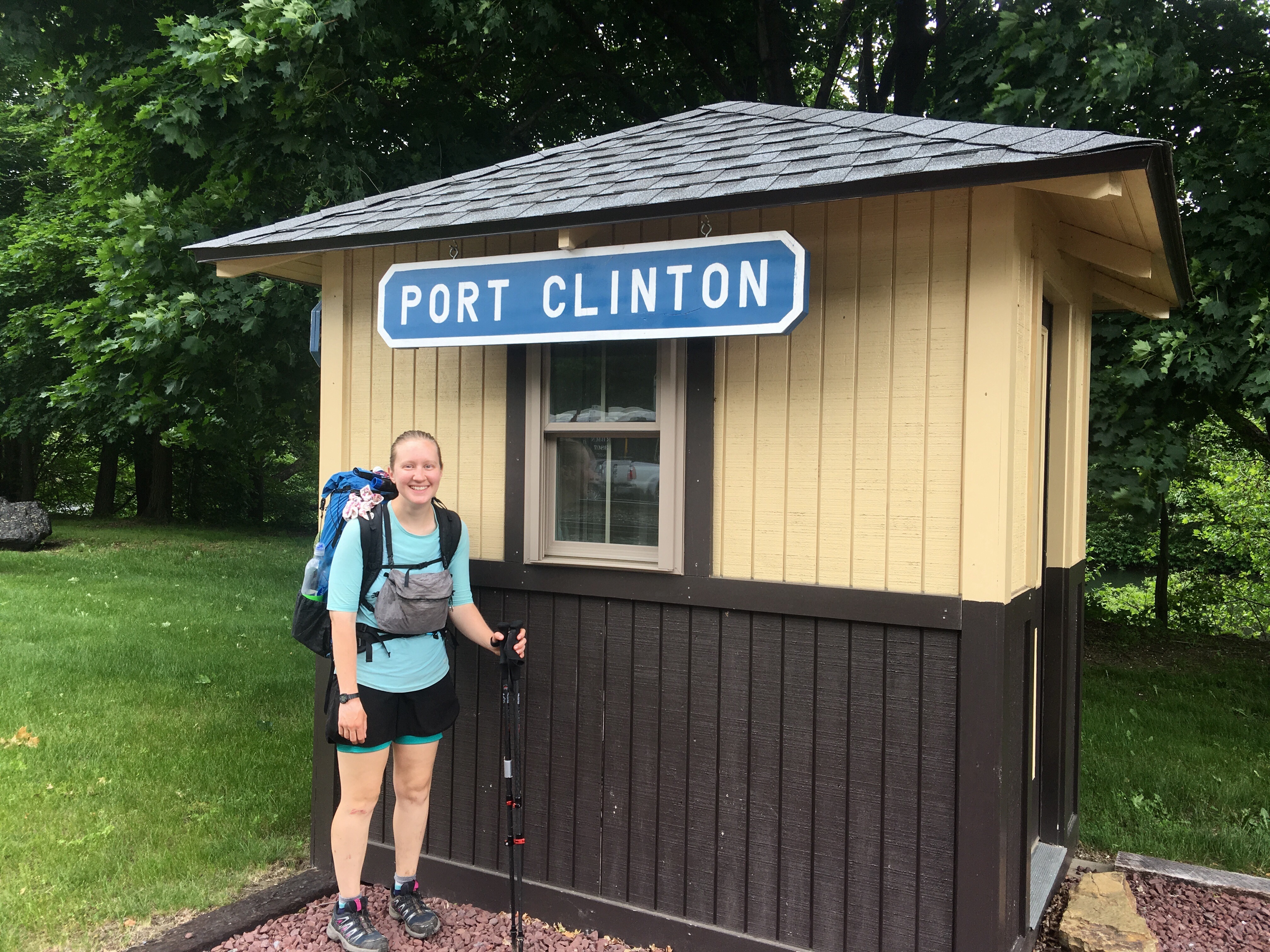 We walked to the peanut shop and I met Cindi (Mast, Rash and Piñata’s mom). It was great to finally meet her after talking through Facebook posts. We all piled in her car and she drove us to Wawa for subs, which we had been craving all day. After Cindi treated us to our dinner, we piled back in the car and went to the hotel. 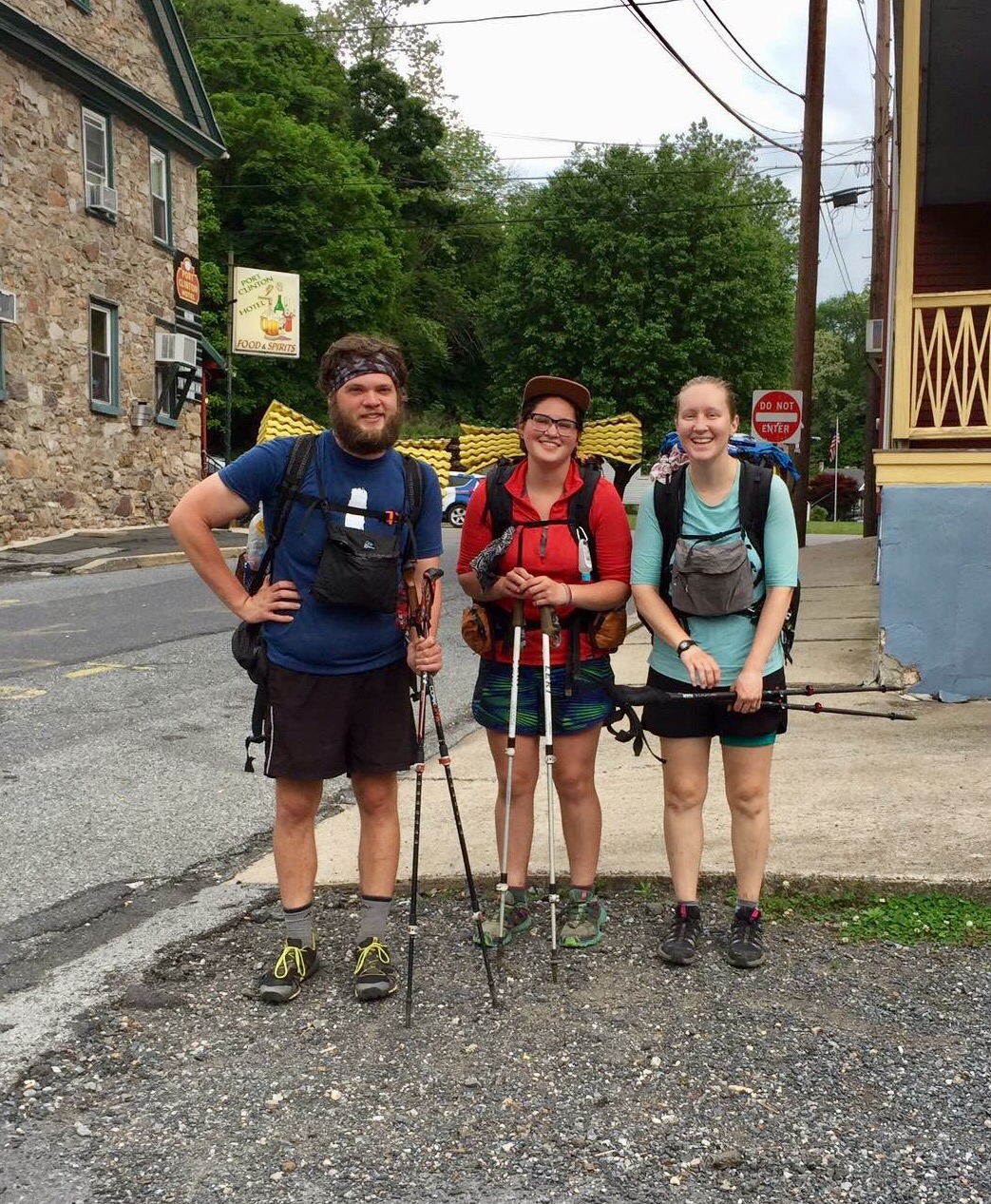 We unloaded everything and showered while Cindi helped us with laundry. During my shower, I found a tiny tick attached to my left chest. It was smaller than a poppy seed and fairly easy to pull off. I showed it to the others and I got the award of the first one in our group to find an attached tick. 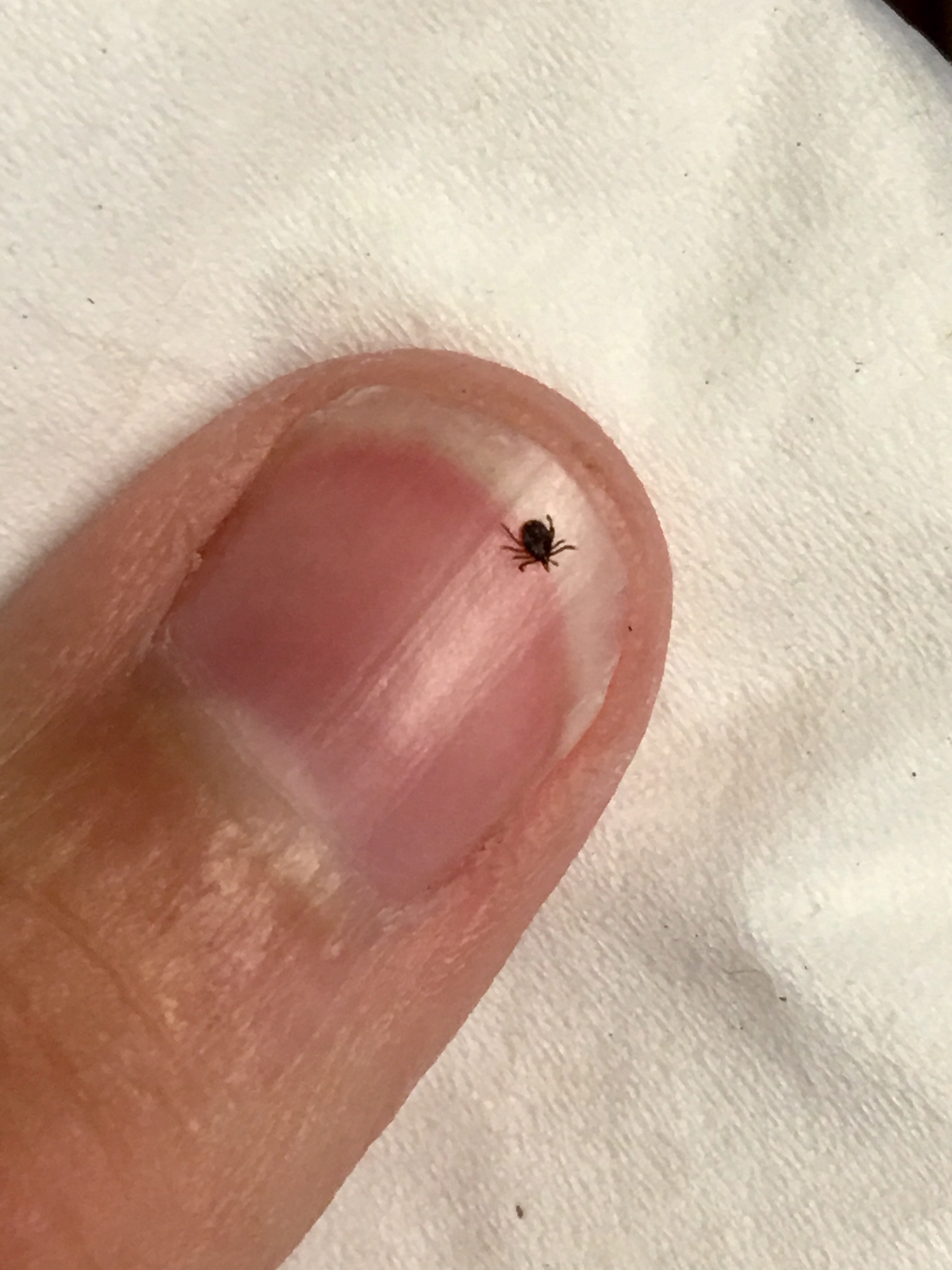 Tiny tick trying to make a meal of me

We then went to Cabelas where Rash and Piñata both got new shoes (Piñata got the same shoes she had and Rash got Salomon, so we’re now a Salomon tramily). We made a quick Walmart run for resupply and then back to the hotel, where we ate Cindi’s brownies and relaxed. 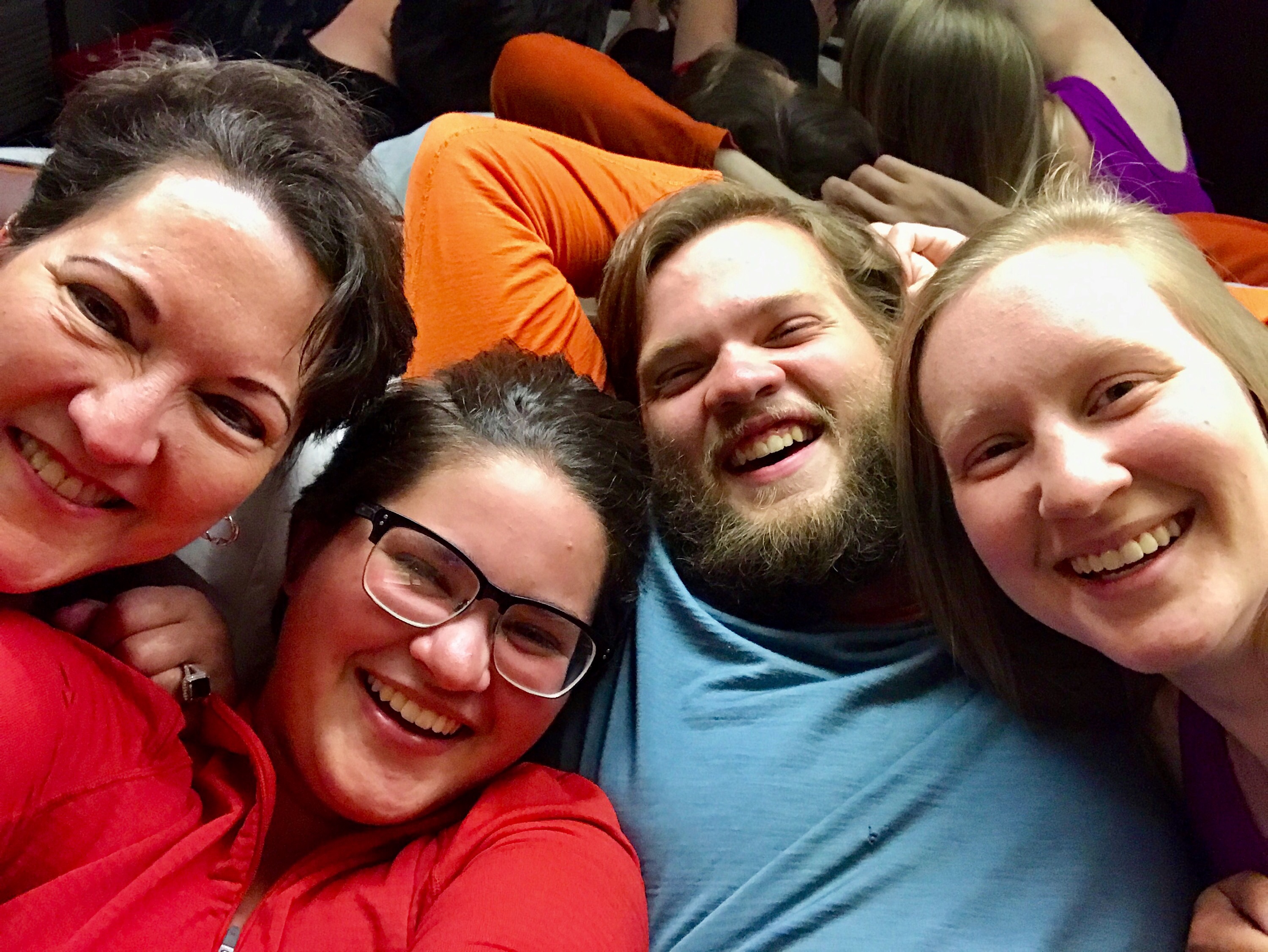 We woke up early, even though we went to bed late. The forecast was calling for thunderstorms and rain all day, and since Rash and Piñata have hiked this section before, they knew we had more rocks in our future. Hiking over wet rocks, like when we did Dragon’s Tooth, is dangerous and takes twice as much energy. I was emotionally and physically drained. The trail was wearing on me and I was sick of hiking. It had been 12 days since my last zero, so I ran by Rash and Piñata the idea of taking a zero today. Rash wasn’t thrilled at first, but Piñata had been talking about zeroing today for ages, so she was on board. We decided to eat breakfast, talk to the front desk to see if a room was available, and then make our decision.

While at breakfast, we saw 5 other hikers who had our same idea of not hiking out in the crappy weather. By this point it was raining in sheets and looked miserable to go out into. We decided to get a room for another night, but we had to switch to another room down the hall. We finished our large breakfast and headed upstairs to pack up. 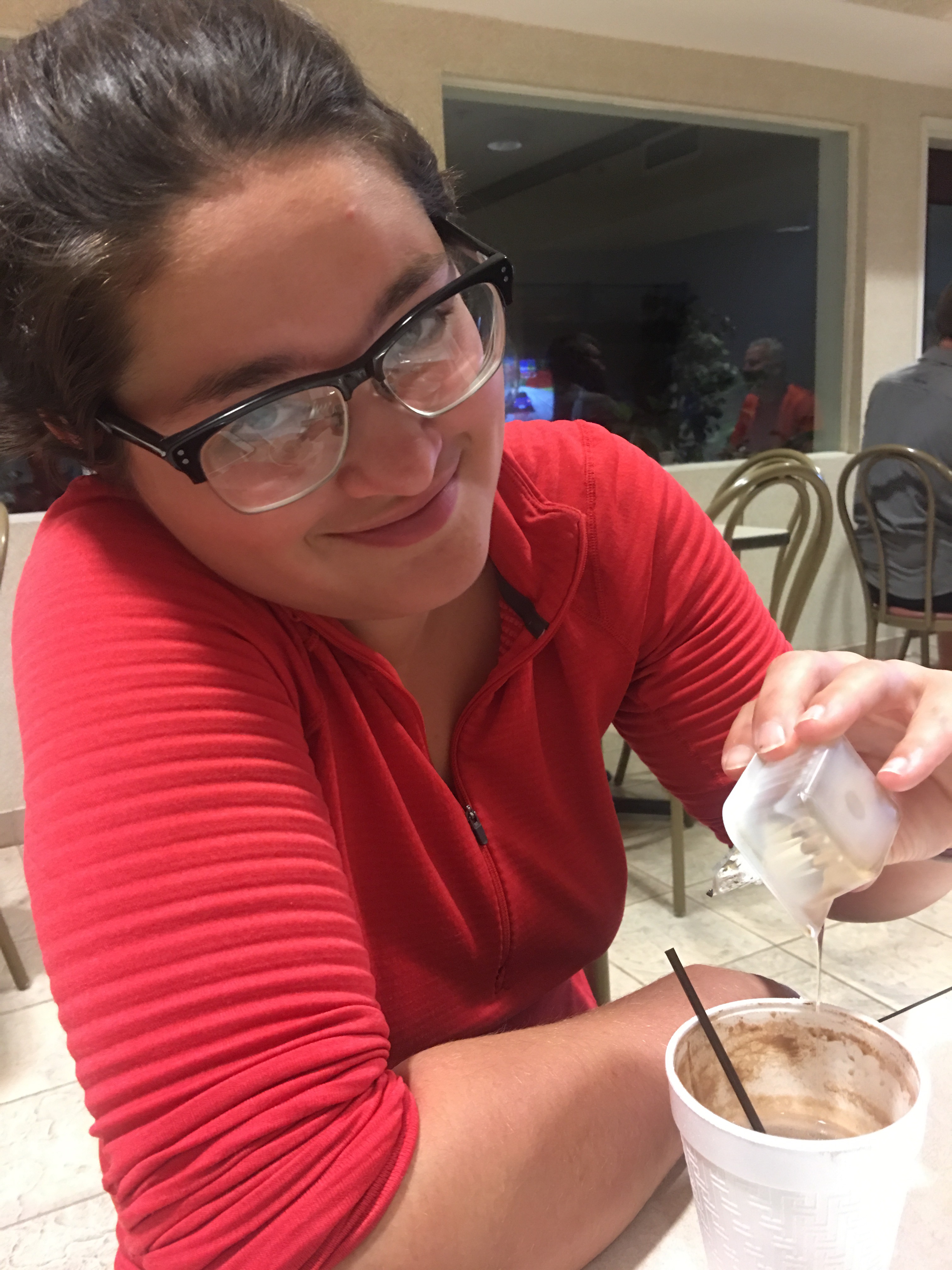 We lounged around until our deadline of noon to pack up and get downstairs to change rooms. Once in our new room, we ordered delivery from a local pizza shop. I got a veggie stromboli which was just ok and taco wrap which was amazing. Food delivery, where someone brings food to your door, is the best thing ever invented. 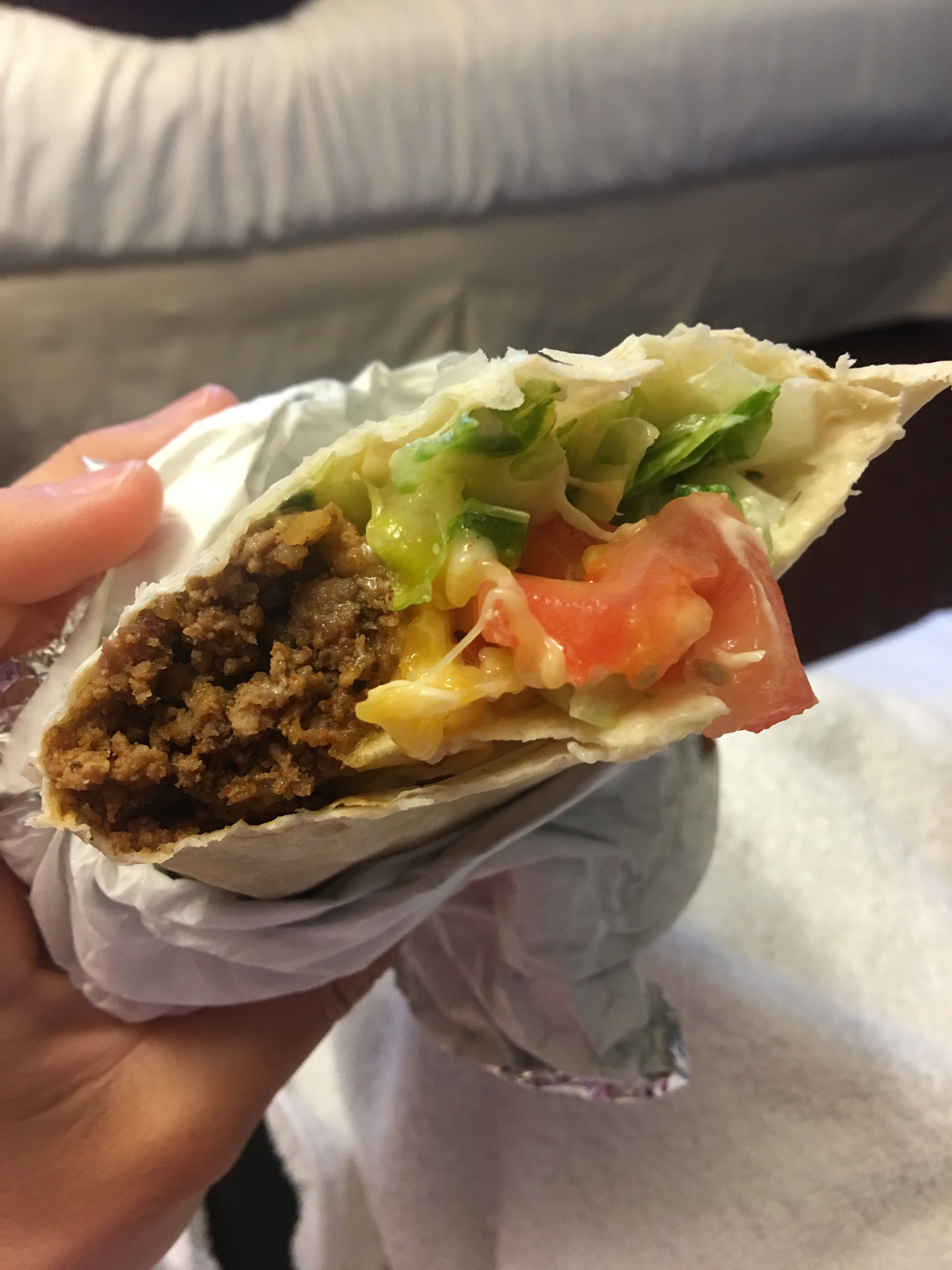 We didn’t moved the rest of the day. We watched hours of TV including Family Feud, American Dad, and even small parts of CSPAN. I still feel a little guilty lounging around this much, but this is how a true zero should be taken. My feet and knees still hurt by the evening, but they don’t feel like they’re in danger of falling off.

After resting all day yesterday, I woke up to Pinata’s 7am alarm rested. I stayed up late last night publishing my journals and cruising Facebook. We got our stuff together which didn’t take long, and headed downstairs to breakfast. We found Butterfeet and 44 at breakfast, and they said Rookie was also in the hotel. We ate a large breakfast and planned out our itinerary for the next 4 days until we reach Delaware Water Gap.

We went upstairs to grab our stuff and then headed down the road to hitch the 2 miles to the trailhead. While we were walking to the main road, a car pulls off onto the shoulder. 44 comes out and asks if we want a ride. He rented a car to visit his cousin, which was a lucky break for us. He said this should make up for playing dead on the trail a few days ago. I told him we were square. 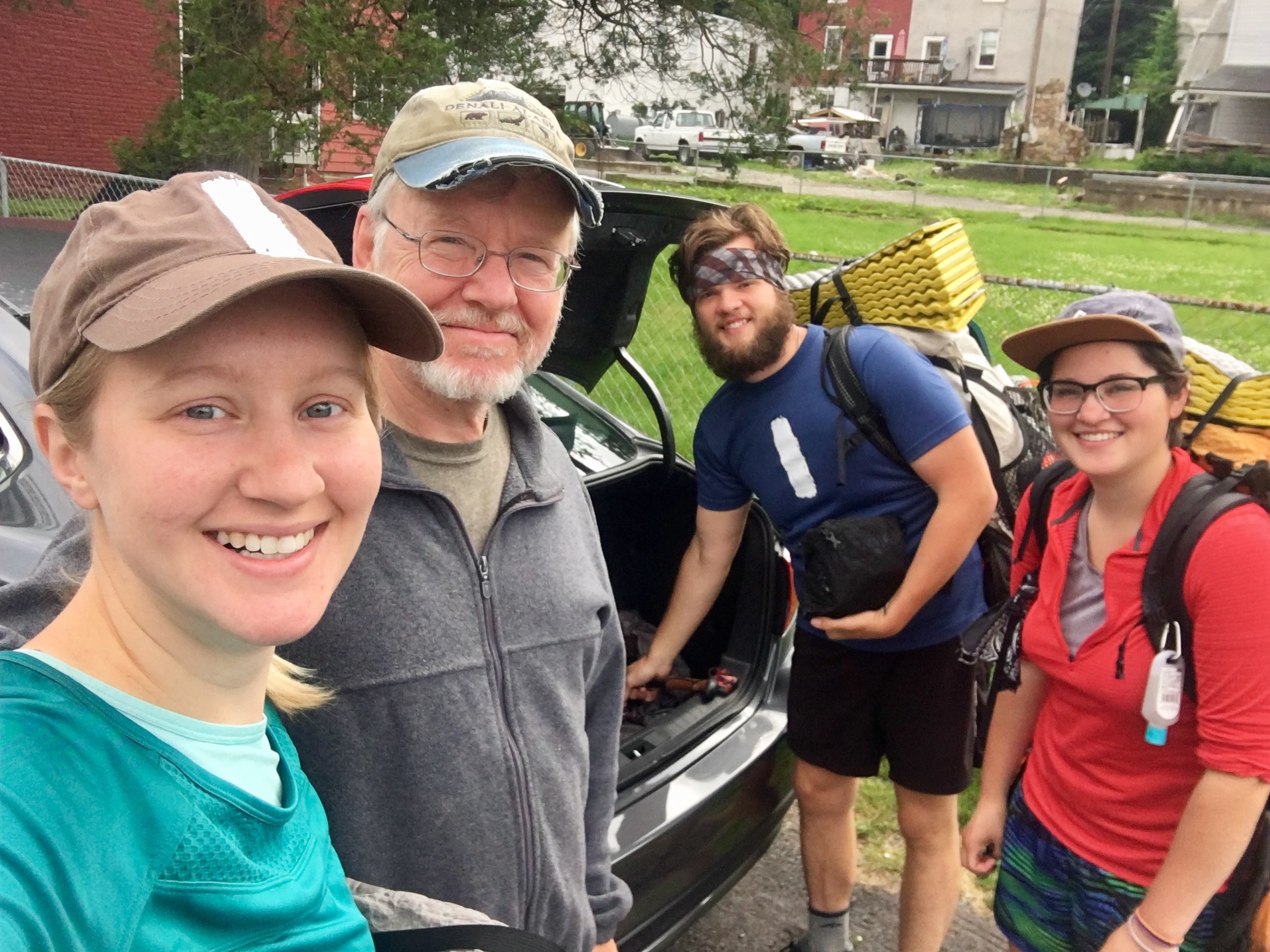 We headed into the forest, and while the ground was wet, the weather was nice. We had a steep climb out of town which made us huff and puff. We got to the top and the terrain leveled out, but it was covered in various sizes of rocks. The rocks were just wet enough to be dangerous, and we slid around quite a bit. 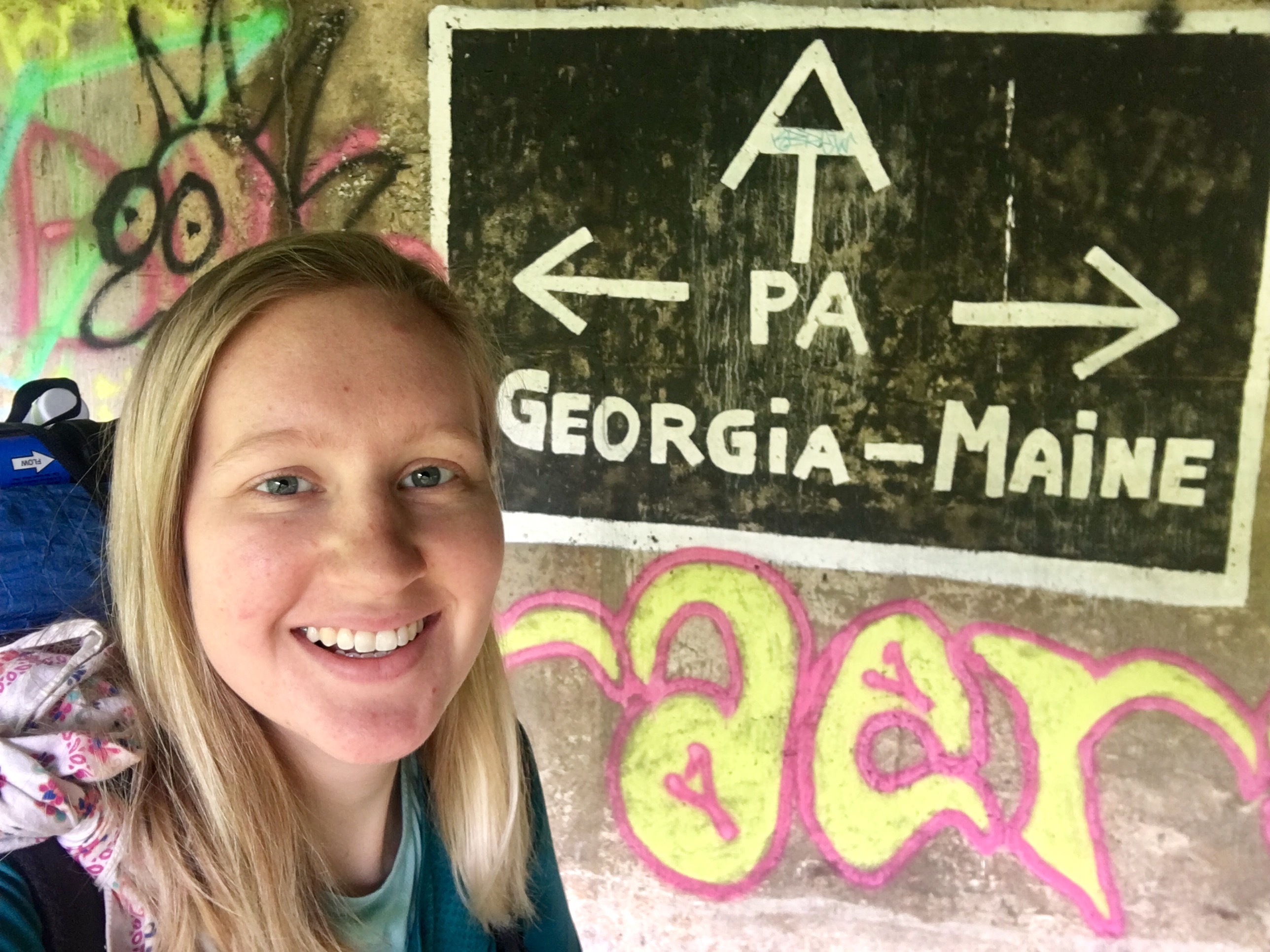 Graffiti under the bridge out of town

The morning hike was hard, but the weather was nice. It was occasionally sunny but mostly overcast. Rash and Piñata were excited to see landmarks they recognized from hiking in the area. We came to Pulpit Rock and stopped for a quick lunch, then we came to the Pinnacle, which had an outstanding view. 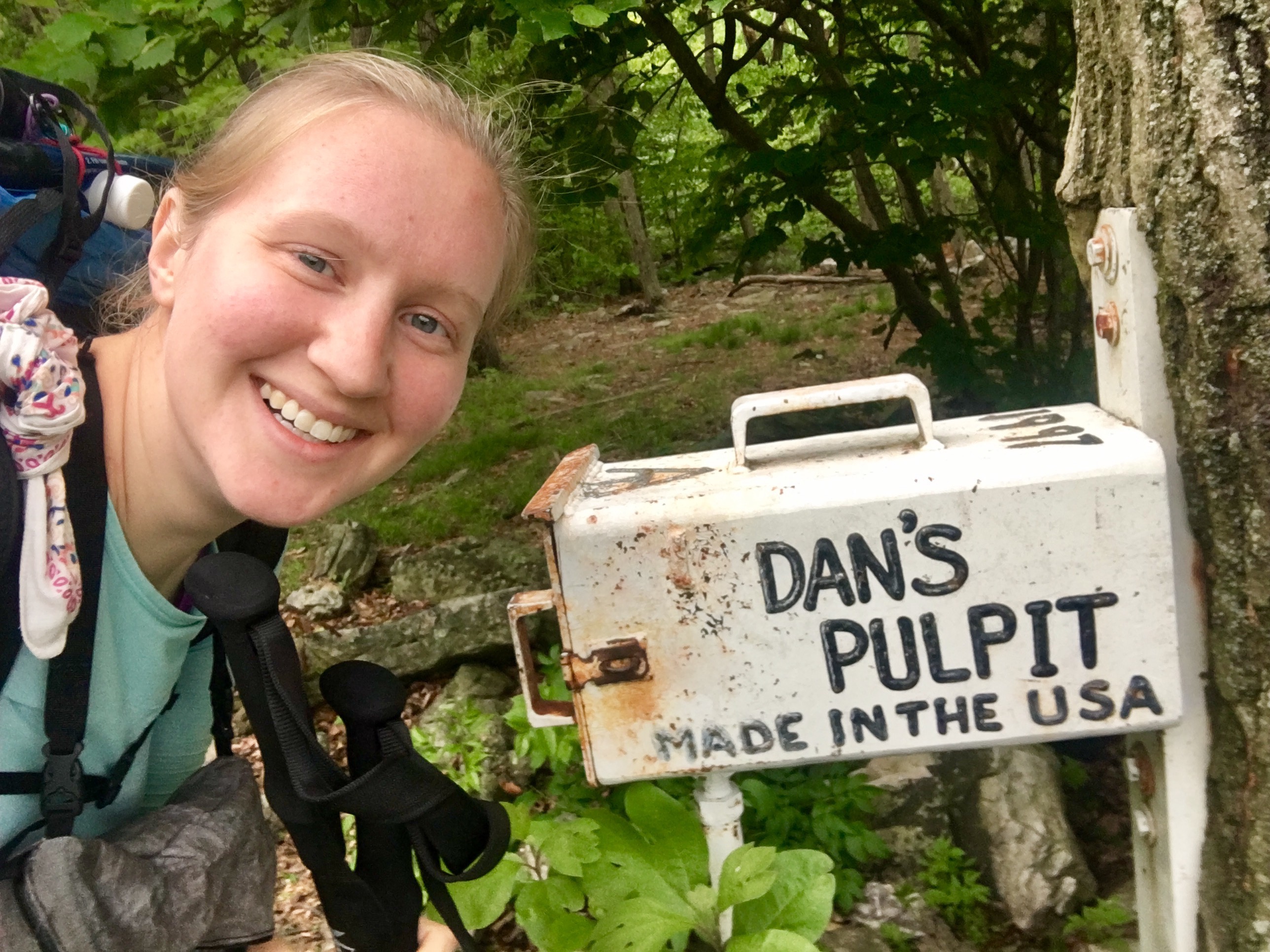 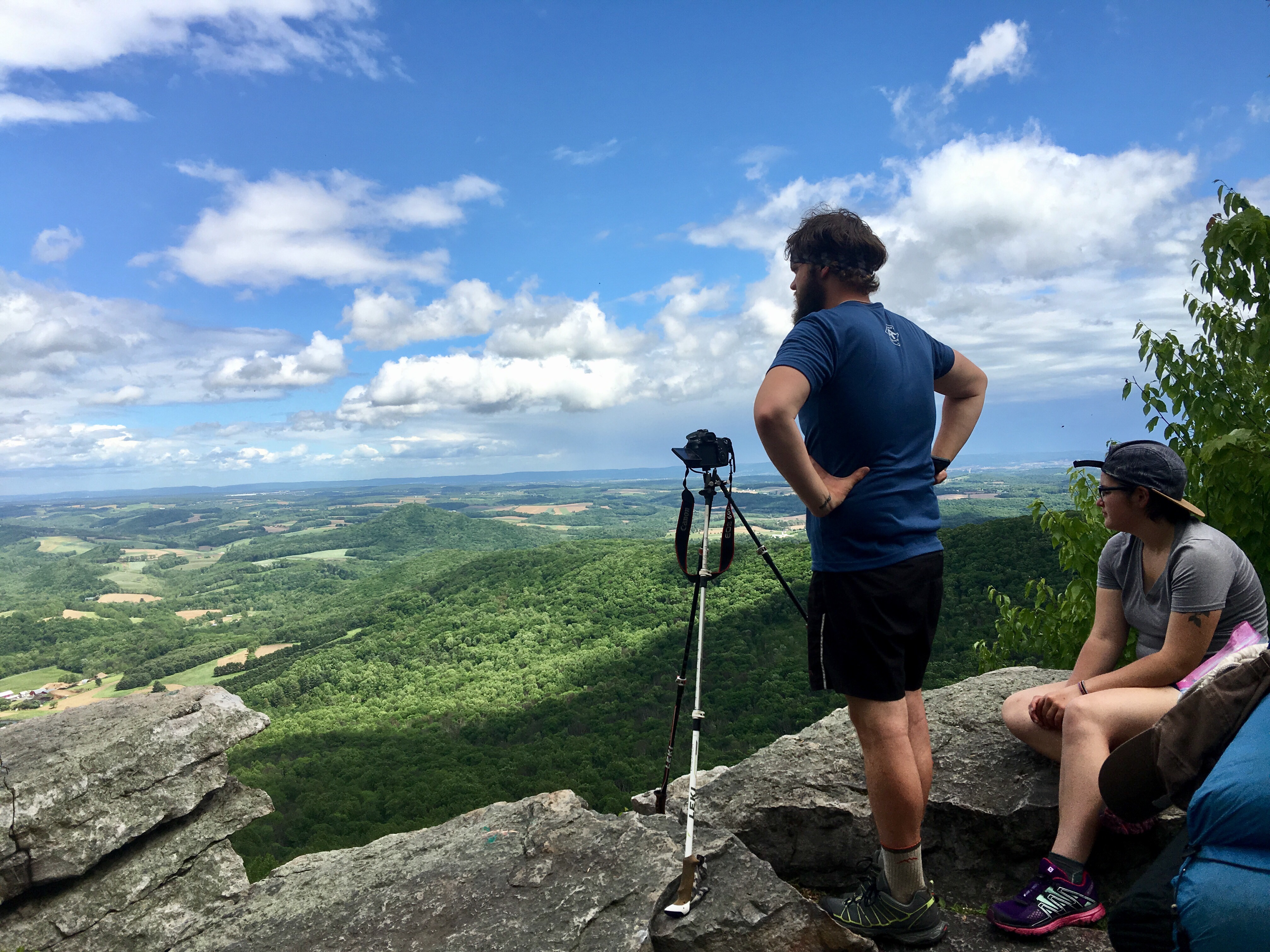 Rash taking a time lapse off the Pinnacle

The hike out of the Pinnacle was amazingly flat and wasn’t too rocky. Rash was leading doing over 3 mph and Piñata and I were struggling to keep up. We came to a large group of little boys with a few adults and I stopped to talk to one of the little boys in a tent. Rash, Piñata, and I took a break on a nearby log. We continued onto the campsite, and crossed over large boulder fields. One boulder field was a huge pile of rocks we had to scale down it. 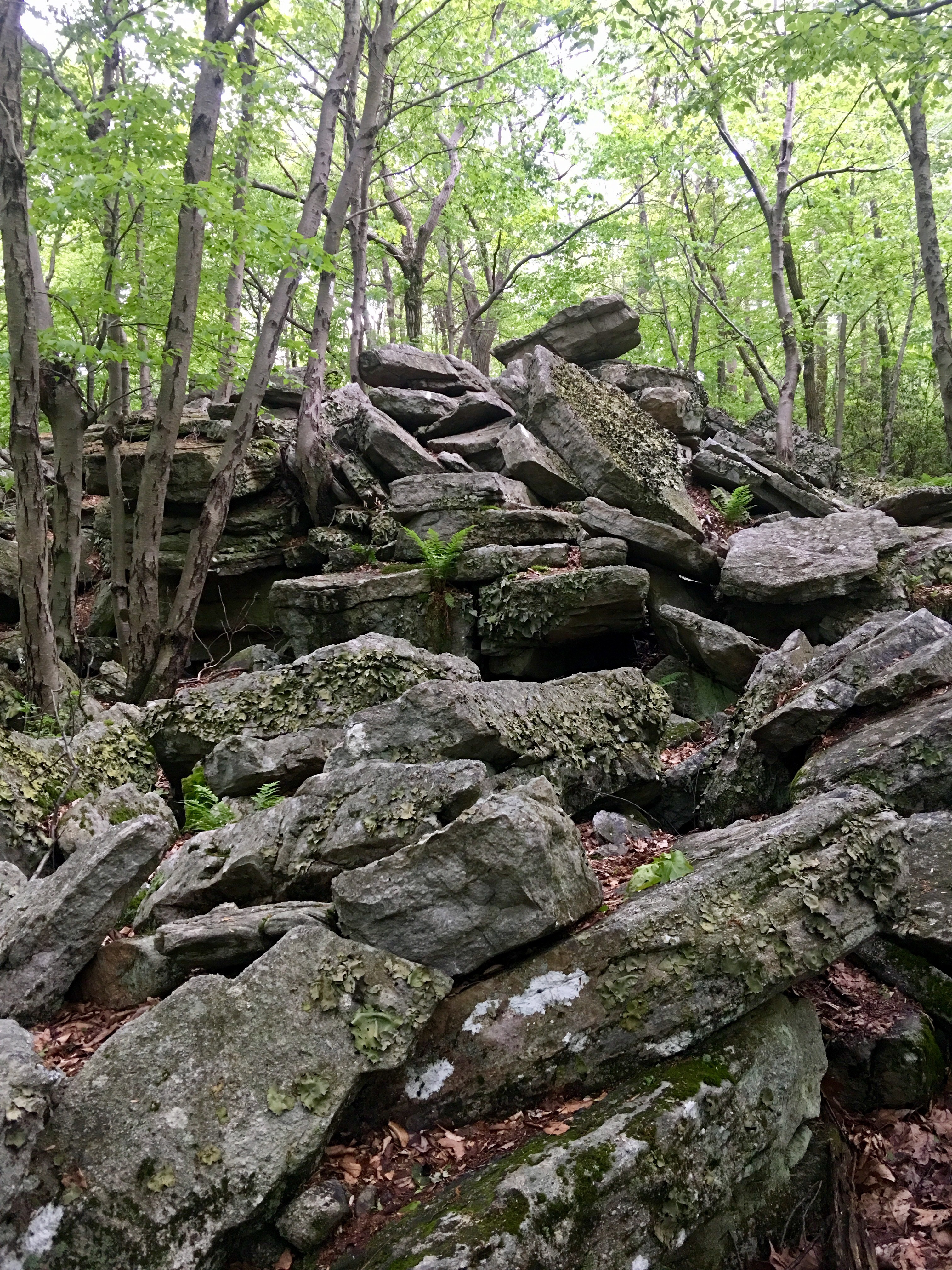 When we had 0.6 miles to the campsite, we came across a clearing with a fire pit and a blue blaze trail off to the side. The blue blaze trail was marked with 3 blazes, which none of us had seen before. We figured the map must be a little off and this must be our campsite. The map listed the water as 0.1 miles down a steep blue blaze, and this blue blaze was steep. We grabbed our water gear and headed down the trail.

After walking for 17 minutes and going down the whole time, we aborted the mission. There wasn’t a drop of water in sight, which meant we were probably at the wrong campsite. We had to go back up the steep hill, and the sun was setting fast. We grabbed our stuff and hiked the 0.6 miles to the actual campsite, and found the water was marked with a sign. 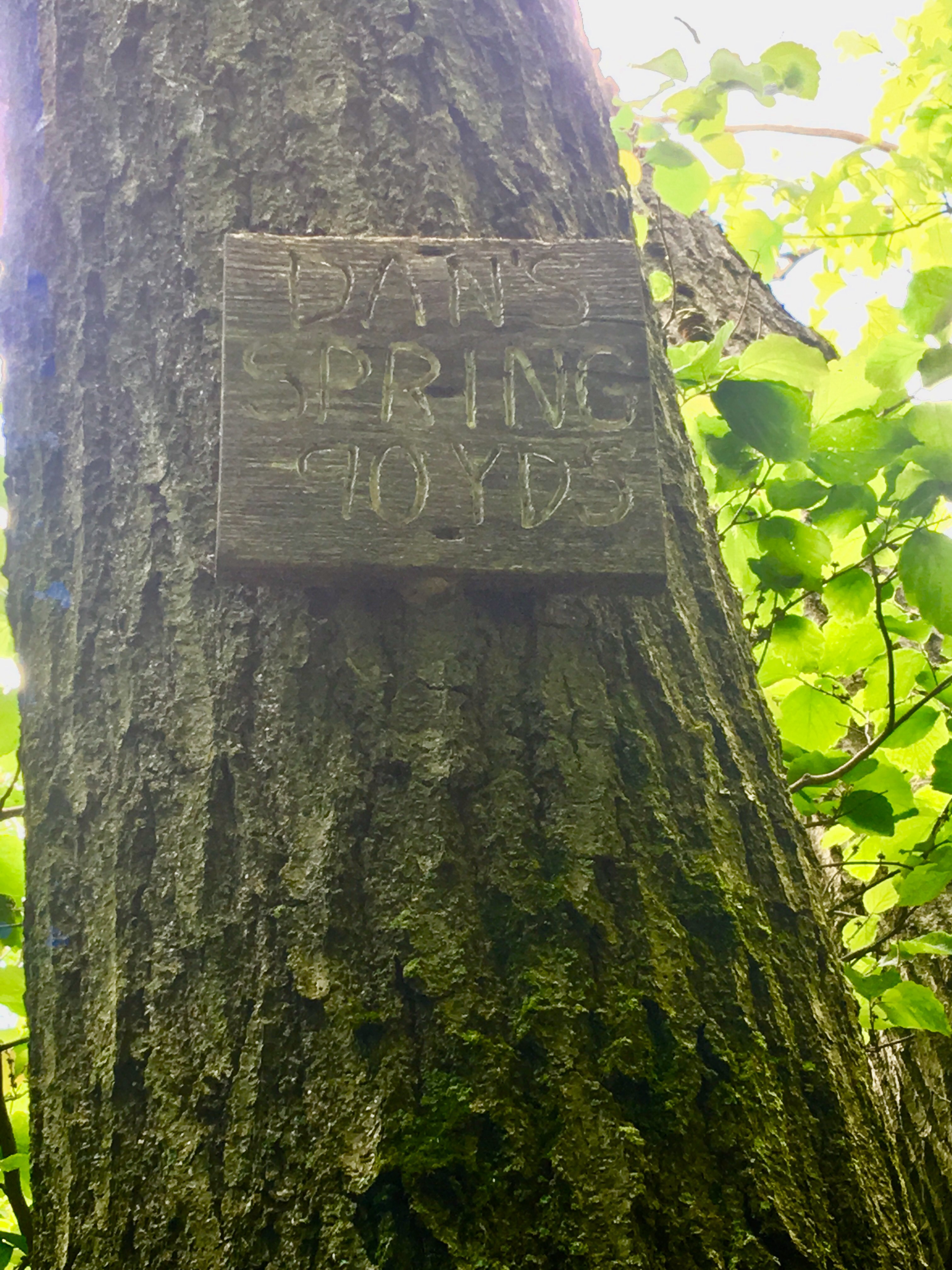 The water was indeed down a steep 0.1 mile trail. I carried up 3 L and quickly threw together dinner so it could rehydrate while I set up my hammock. Once our hammocks and tarps were all situated, we ate and turned in, listening to the occasional pitter patter of rain on our tarps.