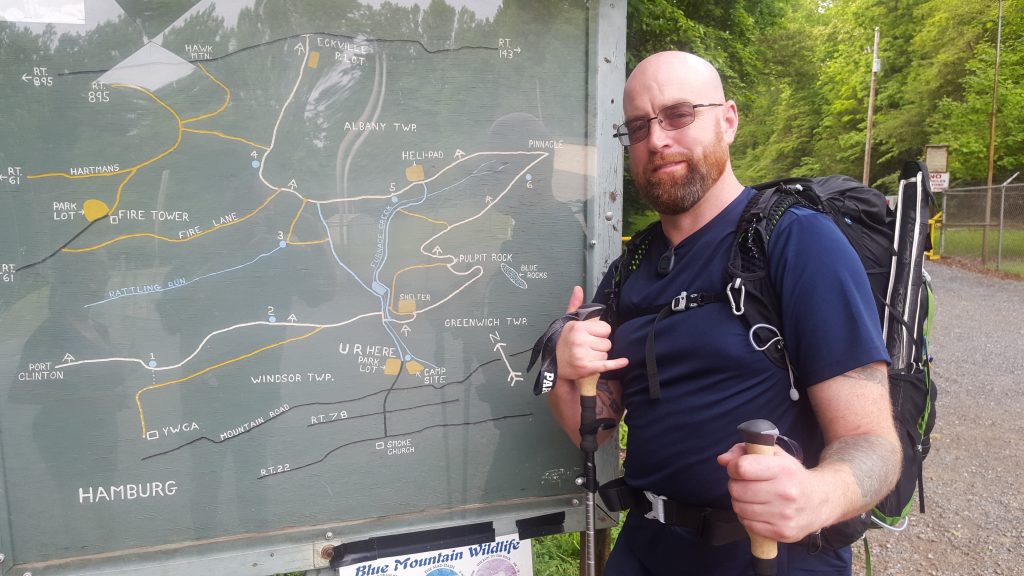 It’s been a long wait, but I’m finally back on the trail. It’s been four days and I’ve only made it 34.5 miles. My trail legs are toothpicks. Within 2 weeks I’m hoping to get up to an average of 18. Here is a quick breakdown of my adventure thus far.

Two of my best friends (J and B) picked me up and took me out to breakfast. I destroyed a large tub of sausage gravy and biscuits and filled my gut with goodness. I hung out with them for most of the afternoon and frantically rechecked everything in my pack for the bajillionith time. After doing GA to PA, I don’t know why I haven’t learned by now that as long as you have the basics and food nothing else really matters. You can always pick stuff up along the trail if needed. The trail provides. Karma is real. Later in the afternoon we headed off to Cabelas near Port Clinton so I could pick up a few last minute supplies. Afterwards we hit up Red Baron and they treated me to dinner. They really are the bestest. I shoveled one of the largest burgers I’ve ever seen into my mouth and topped it off with 2 vanilla milkshakes. I felt gluttonous and bloated…. the only way to start a long distance hike. They dropped me off at Windsor Furnace shelter around 5:30 pm and it was a short .4 to the shelter. Being my first night back on the trail, I didn’t sleep very well. 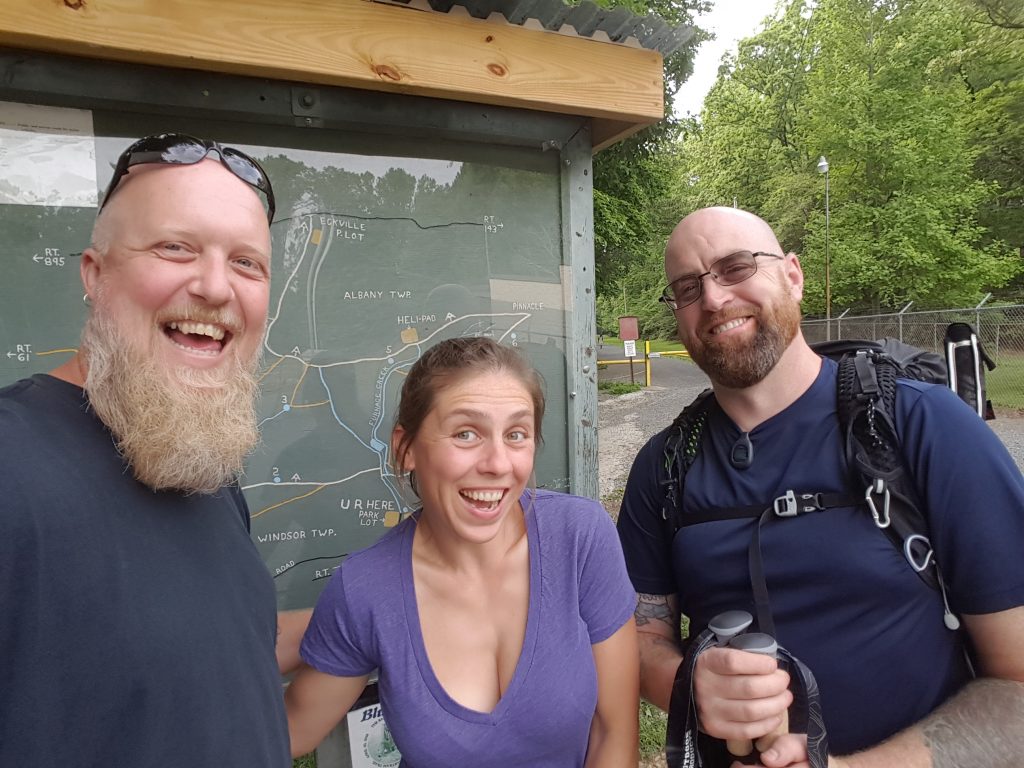 I awoke feeling sluggish and slow. The first 3 miles I struggled. The weather didn’t help as it rained all day. Not a torrential downpour, but that drizzle on and off type of day with the occasional gust of wind. The rocks of Pennsylvania can easily end a thru hike when dry…imagine what they’re like wet!  I busted my ass once . Just once. I should have fallen about ten times. I attribute this low fall on ass rate to the fact that I am part cat, ninja, and also a master log roller. My goal was Eckville shelter which was only 9.1 miles. After 7 miles or so, My calves were burned. After being off the trail for so long, I had forgotten how long it can take to get the trail legs back. I hobbled into Eckville shelter around 3:30 and decided not to push it. This would be my home for the night. It was a pretty good home too. Not only was there a solar shower, but there was an actual flushing toilet! After getting out of the shower, it started dumping buckets of rain. I didn’t have my umbrella on me so I did what any normal man would do. I sat on the toilet and waited it out. I didn’t even have to drop anything. I just sat and thought. This has always been where I do my best thinking. I think every song lyric I’ve ever written has been while I’m on the toilet. Okay, enough potty talk. The thunder and lightening finally died off and though I got to sleep early, it was another night of tossing and turning. I’ve never slept well in shelters….or hostels for that matter. A hotel room is a different story. Maybe in New York. 🙂 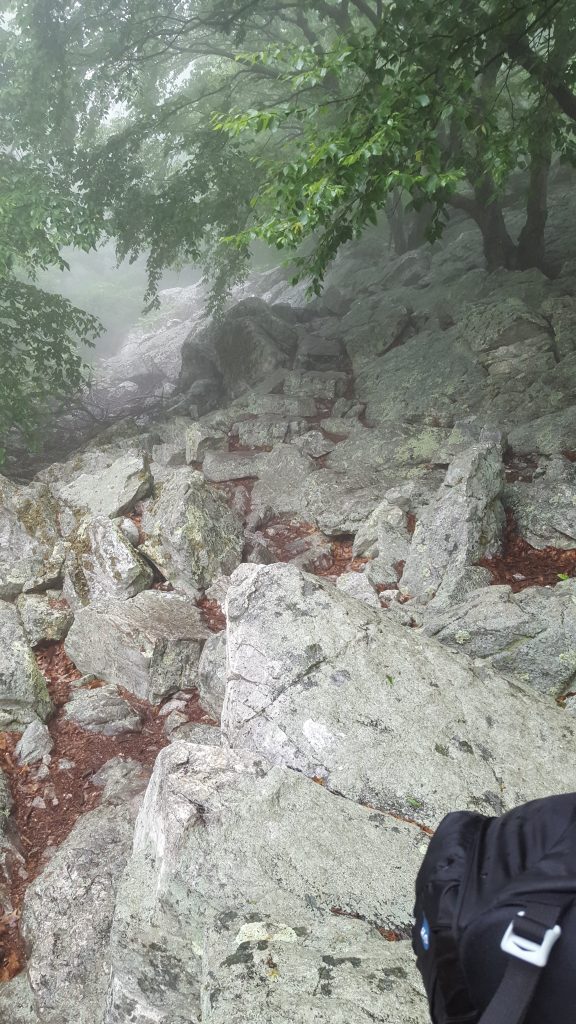 SUNSHINE!!! I awoke to sunshine and blue skies. There’s nothing like walking through a forest right after a good rain and seeing sunlight glisten off of every plant while steam rises from the ground as the sun warms the world. Smiles. Big smiles. Inhalation brought the scents of spring and I couldn’t get enough. Then the rocks came. They slowed me to a snails pace. I’m not gonna lie. It was not only time consuming, but EXTREMELY difficult. The rocks were still wet from the night before and despite my love for the sun earlier in the day, I was upset that it hadn’t yet finished it’s job. My ninja/cat reflexes weren’t on point this day. While walking and talking to another hiker, I slipped and fell into about 3 inches of mud. Woohoo! Fun times! It took me 2 hours longer than the previous day to complete just 7.4 miles. To top it off, we got more light showers later in the afternoon. I slept very well. I found a really nice place to pitch my tent and fell asleep around 7:30. No tossing and turning, but boy was it chilly! 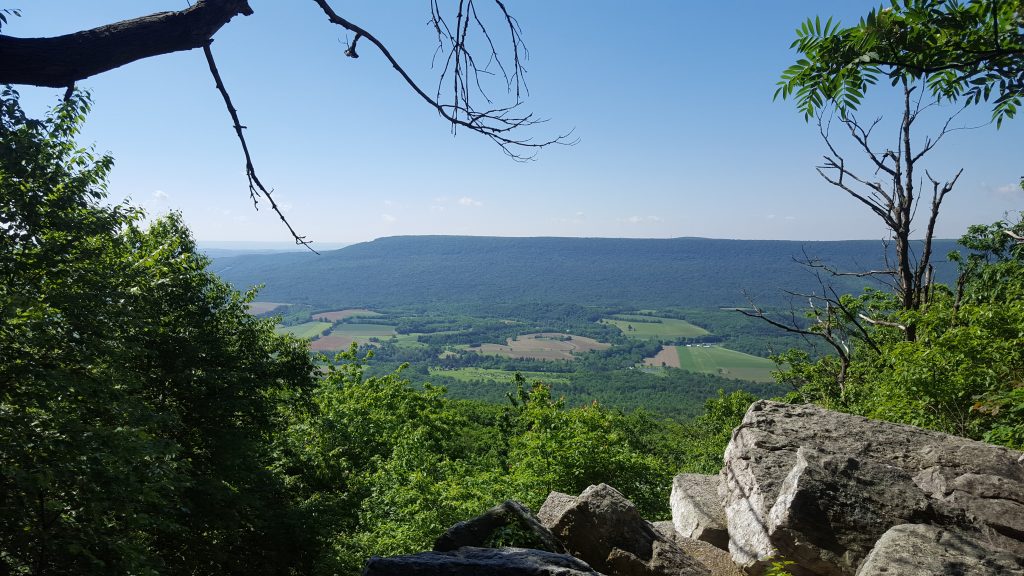 I was up at 5 am and had eaten breakfast and had my bag packed by 6am. I hung out and met 3 NOBOs at the shelter and finally got out of camp around 7am. The weather was absolutely beautiful. Once again I was feeling the life that Spring injects into my mood. I got off to a strong start and covered over 3 miles in the first hour. That’s pretty damn fast for a hicker. I hit some rocks that weren’t too bad and then bam… another rock maze. This maze soon led to Blue Mountain, Knife Edge, Bear Rocks, and Bake oven Knob. While the rocks were a pain in the ass, the views made it all totally worth it. I can sometimes forget how beautiful my home state is. This section reminded me. There were some stunning views. Shortly after summiting Bake Oven Knob, I came upon the shelter. I had hiked 10 miles and my feet felt like someone had been pounding on them with hammers. Two other thru hikers came up to the shelter and we started talking story. Suds and Sudsman started in GA back in February and after several injuries are making their way north again. They said they were going to push on another 6.8 to the next shelter. I remembered something that I had discovered somewhere around North Carolina. A 10 mile day hurts no more than a 15-20 mile day. I may as well just bang it out. I hit about a mile and a half of tricky rocks and then it was smooth sailing for the next three. I walked up a gradual incline and at the top it was magnificent. To my left was a long row of trees placed almost in rows by nature herself and to my right was knee high grass with sparse patches of brush and small trees. I heard something jump about 5 feet to my right and it was a young deer. We scared the isht out of each other. Once she realized I wasn’t a threat, she just chilled and allowed me to get a snapchat vid of her and a couple pics. That was the highlight of my day. I’ve seen thousands of deer in my lifetime. They’re all over Valley Forge which is right by where I grew up. It’s totally different when I’m out on the trail. I look at them as majestic creatures instead of the pests I was taught they were growing up.I finally pulled into the shelter around 6:30. It was a long day, But I pulled 16.8 miles. Including walks to water sources and camp walking, my Fitbit said 19.8 miles. That’s a pretty good day. After rating and hanging my bear bag, I laid down at 8pm. I was just about to fall asleep and heard a hiker approaching. “Any thru hikers here?” All three of us jumped up. “I have some trail magic for you.” This amazing guy Icarus hiked up the mountain with cheesesteaks, onion rings, chili cheese fries,  chicken fingers, and cokes for all three of us. Totally blew my mind. Stuff like that just shows how tight the A.T. community is. Everyone looks out for each other and helps one another. If only the rest of the world could adopt that attitude it would be a much better place. I hope someday I’m able to pay forward some of this magic. That guy was awesome. He works at the REI in Conshohocken so if you happen to stop in and see a guy with the trail name Icarus, please tell him Griz says thank you again. I’m still smiling about last night.  I shelter slept so once again it was a restless night. 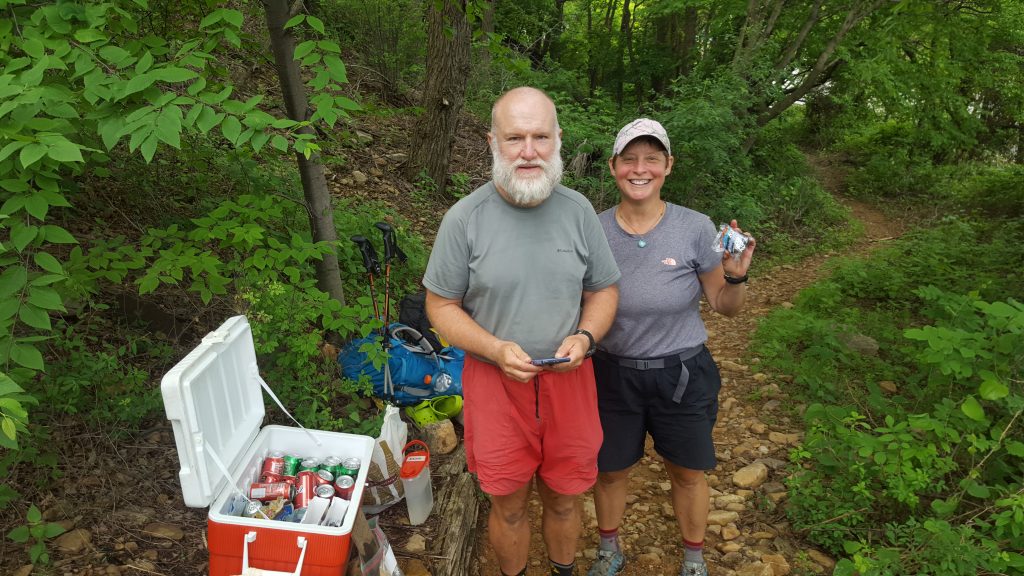 I had to order a new bear bag from REI. My old one busted at one of the seams so I parted ways with Suds and Sudsman and headed into Palmerton to pick it up from the post office. More Trail Magic!!!  Sodas, wters, cupcakes, and oranges woohoo! I had planned on just taking a NERO (near zero) but realized the “jailhouse” hostel was closed. I decided to do some laundry and was going to hike out after the storms rolled through. I was dreading the hike because Lehigh gap is all rocks and after a rain they can be treacherous. It’s not an easy climb. While doing laundry, a girl I had met at Eckville shelter rolled in. She (Ranger) told me there was a new hostel called Burts garage and it was right next to the laundromat . It also had a shower! I was sold. Nero time. Quick resupply, blog post, and rest day. Tomorrow I conquer Lehigh gap when it’s dry and I should be out of PA in another 2-3 days. 🙂

Thanks for reading. Stay tuned! Next week I’ll have some more updates!

Check me out on social media too! 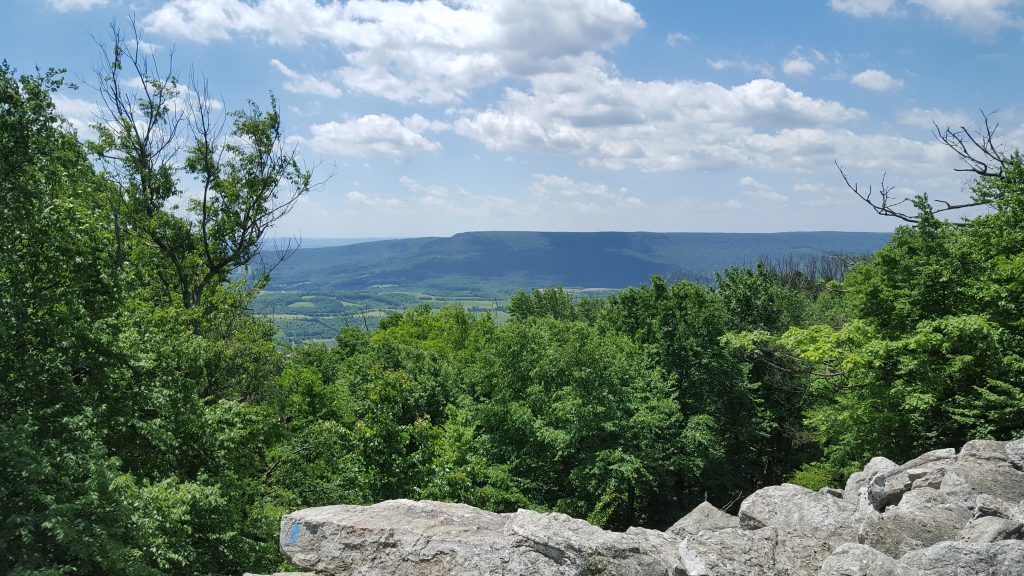