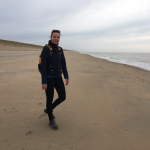 Snow, Blood, and Lost Electronics: The Misadventures of Snow Angel

About two weeks ago I spent a zero day in NOC, which besides the white water rafting, was quite uneventful and to be honest a little boring. Only one restaurant, a very, very limited general store (with no fresh food), and an outfitter. That is just not enough for me to keep myself entertained. Maybe it was also the lonely bunkroom I inhabited (only person in a four-person room), maybe it was my mood, but I was genuinely happy to get going the next day. Of course I did see the bad weather prediction and the warnings about them, but hey, it could not be that bad. Besides, the predictions always seemed a little off anyway. So I took off the next morning, enjoying the cute little snow fluff falling around me. I was mostly dreading the long climb, even when I met some people camping a little uphill who were saying they were going to wait out the storm. Slowly the snowflakes started getting bigger, but I was still just admiring the beautiful surroundings and excited about seeing snow in the woods in March. 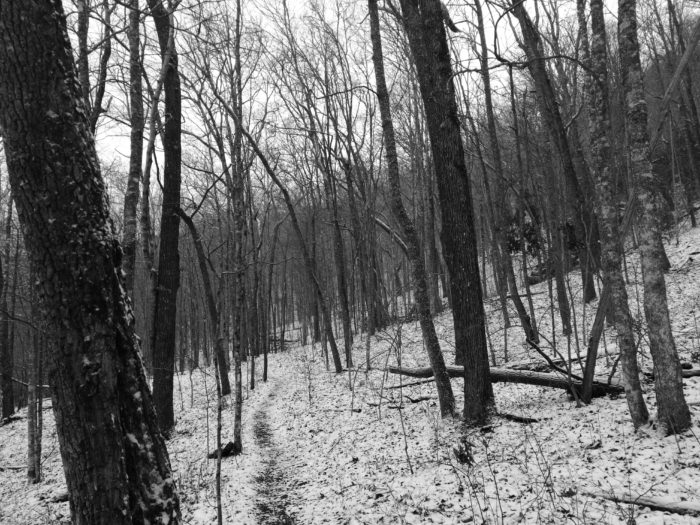 But at one point not only was there a growing layer of snow around me, but also on the trail. Still excited, I made a video of me walking in the snow, thinking about how many inches I could report that  I trudged through on my hike. I should not have worried about that. It grew from sole deep, ankle deep, calf deep, to unfortunately knee deep. Because the higher I got, the more exposed it started to be. On the ridges the snow had fallen full force, which together with the very strong harsh winds, made for large snow dunes. I would turn a mountain, get hit in the face with more snow and wind, and would sink pretty deep in those snow dunes, which would look suspiciously smooth. Slowly the trail started to disappear, and most of it seemed just like a beautiful smooth snow mass. But with a lot of focus on minor indicators and my GPS (my mom feels so vindicated that she gave me that thing to carry) I plowed through the snow, hoping to see the sign of the shelter very soon. And finally I did. 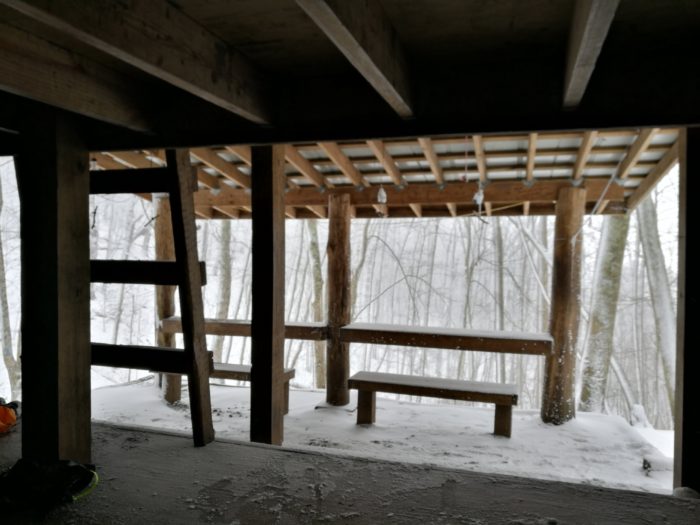 I slid down the invisible path, saw that there was no one inside, and quickly started to get out my sleeping gear so I could get into my warm quilt asap. But it was still early. And I got so cold that I just had to prepare some hot food and drinks, just to get a tiny little warmer. Suddenly there was another girl, Laurel (aka Duracell, named later). She said she was so happy that she could follow my footsteps since she lost the path at some points too. But she was thinking to herself, I’m really trusting this person in front of me. I was just really, really happy to not be alone in that cold shelter that night. An hour later, Power Chicken showed up. Again saying how happy he was he could follow the footsteps of the person before him, thinking for sure he would have gotten lost. And finally Slacker (now named Odd Job) showed up, regaling the stories of the difficult way up, almost losing the trail, but oh so happy to follow someone’s footsteps. Our quartet had a long, cold night, but we did survive to see the absolutely breathtaking landscape, the snow glittering in the sun the next morning. 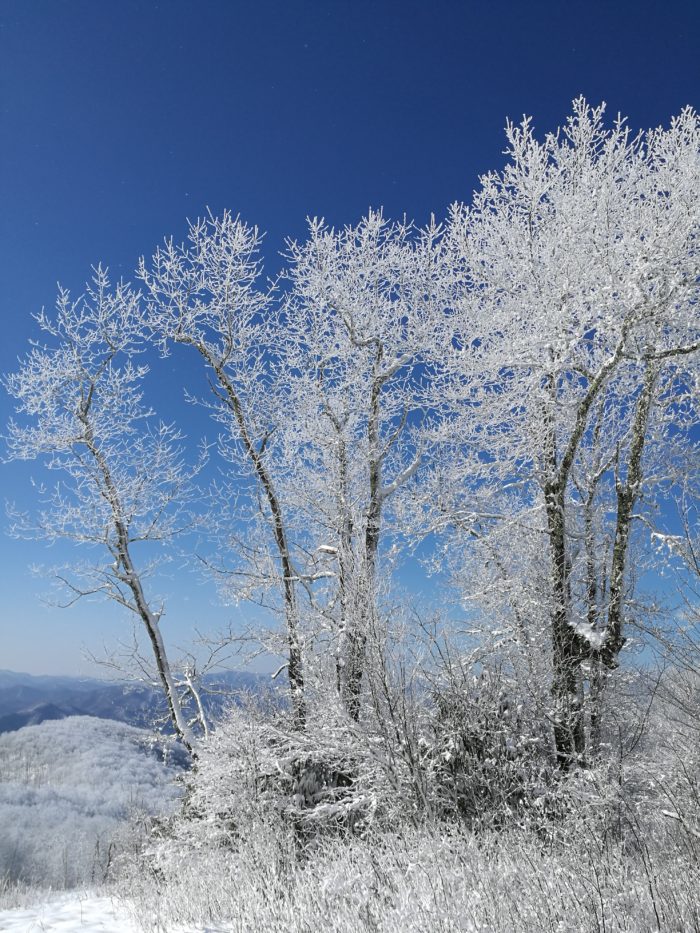 Duracell, Slacker, and I decided to stick together to trudge through the snow and to make sure we found and actually followed the trail over and off the mountain. Treating ourselves to a cabin in the next gap, we looked back on it as a great adventure. And since I was the one leading the group to the shelter, being the first footsteps in the snow to follow, I got named Snow Angel (secretly I most like it because it is such a pretty name, don’t know how it will hold up in the scorching weather conditions of this summer though ;).

How I lost my precious, aka phone and e-reader

So about a week later, after a very relaxing, entertaining but mostly delicious zero in Gatlinburg (that place had a good salad bar and so many interesting snacks), I started hiking the second part of the Smokies. Duck and I got a free shuttle to Newfound Gap, the weather was pretty nice, the planned mileage not too long; all in all a pretty good day. I got there quite on time, put my sleeping gear on the bottom level of the elevated floor, all the way in the corner, so I would not have too many people bother me and I would be near the fire. The shelter filled up pretty quickly, mostly with people I had not seen before. Slowly it got colder, I had done all my chores and decided it was time to hang out near my bed. Put my e-reader on my sleeping bag, my phone on my electronics bag, and slid into my quilt. Of course it went not as smoothly as that; I heard my phone slide off the bag and hit the wooden floorboard. But when I went to grab it, it was gone! Turned everything upside down, got some help from other people, but nothing. Then I saw the space between the stone wall and the wooden floorboard. Big enough for something to slide in, not big enough to put your hand in (far enough anyway)  to shine your lamp in. We tried everything. Tried to  crack open the floorboard with a shovel head, walk around the shelter checking for an opening to the crawl space, reach down with our hands, take a flash picture with a phone (so we could see it, not). But the attempt supreme was trying to cut and shave the wood away with a knife. In all the confusion I hold the knife the wrong way around and cut my finger right open. Blood everywhere, people grabbing their first aid kits, putting loads of gauze on it, still bleeding through all of it. Then even more people showed up trying to sleep in the shelter and I decided to let it go, there was just nothing we could do anymore. It was a weird night of thinking about ways to get them back, thinking of what data I had lost or could get back, mentally writing an email to my family so I could get new replacements quickly. It was hard to leave that shelter the next day. RIP.

So now a week later I have new electronics that my awesome boyfriend ordered overnight, once he got the physical email that I was finally able to send on a trail angel’s phone (out of the Smokies). And I am mostly happy about having books and podcasts again. Podcasts for the last push on those long-mileage days and the books for relaxation at night. Because yes, I am that slightly strange introvert who just desperately needs some mental distraction every night in the shape of books.

Ow and my tent pole broke and my tent started leaking, but I will let you know how that turned out next time ;).

And the hiking? Still enjoying it, physically doing good, liking the people. 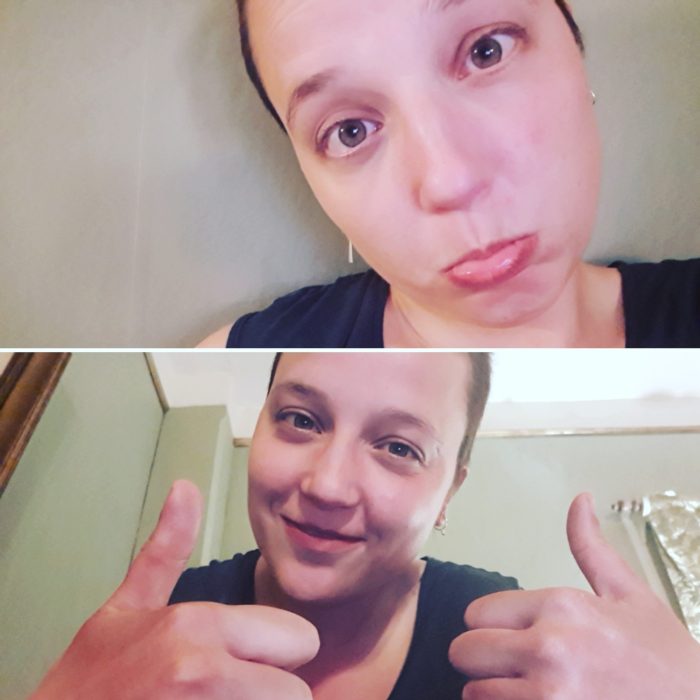 Yep, it is really happening! This 31 year old Dutch woman (girl?) from one of the flattest countries in the world is going to try and conquer the ancient mountains of the USA on the Appalachian Trail, starting in March of 2018. I still go by my real-life name of Esther, momentarily enjoying the sedentary life of a financial administration job, happily living in the big city of Amsterdam. Having studied Cultural Anthropology, I have an innate interest in other cultures and a craving for adventure, that I somehow also need to balance with my more introvert and careful character. But I love a challenge!