A week ago, I thought I’d left winter behind me in the Smokies. I’d had my taste of icy wind, and now it would be spring. I couldn’t have been more wrong.

When I checked the weather in Erwin, I knew a cold snap was coming. The weather said something about snow and freezing rain, which I didn’t quite believe. After all, it was 80 degrees outside, and I was resting in my tent to get out of the sun. How could it be snowing in two days? 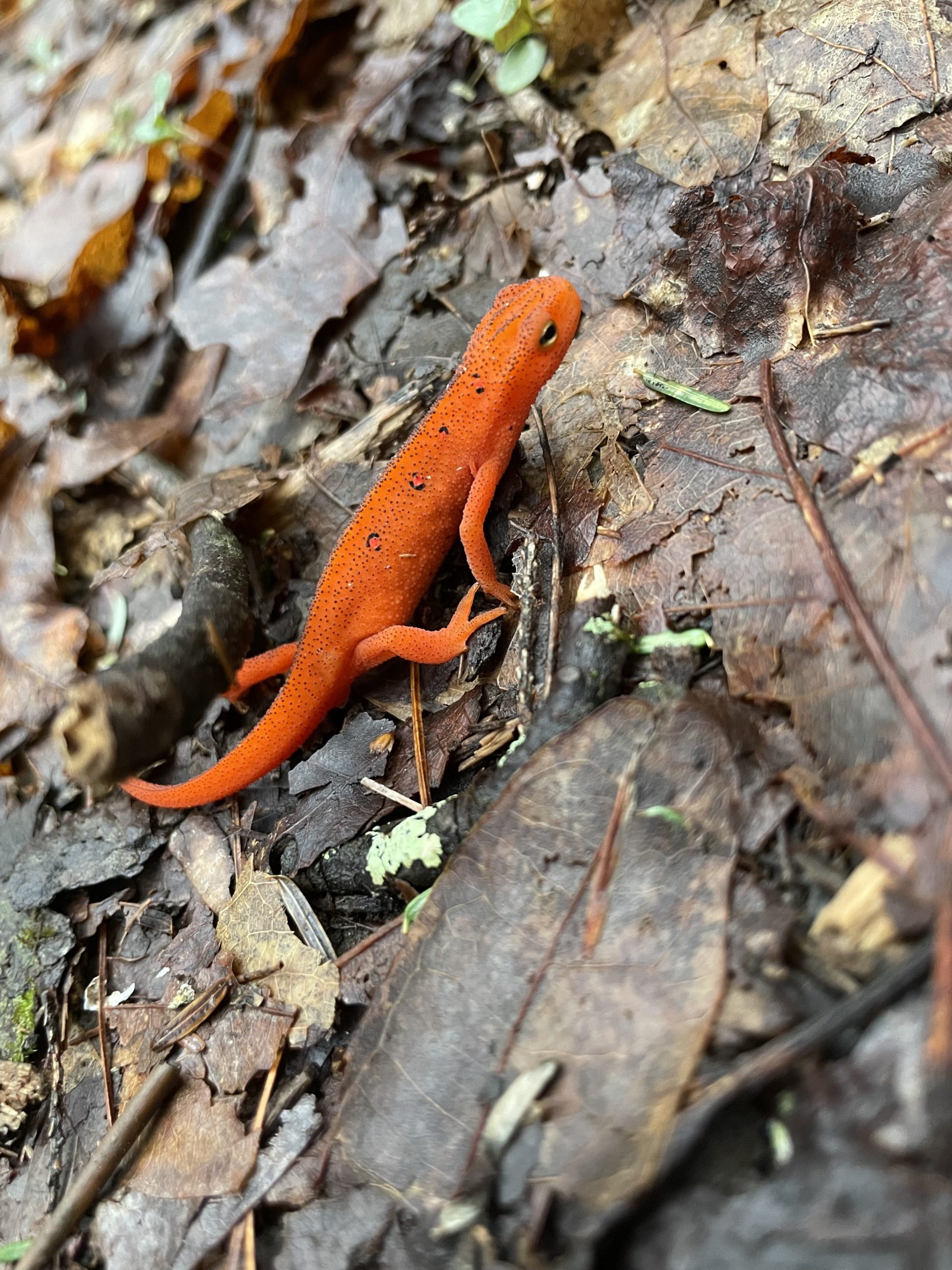 Signs of spring: a salamander ventures out onto the trail.

Just in case, I decided to get ahead of the weather and head to higher ground. My thinking was that the high peaks would be colder, with more powdery snow that wouldn’t melt and get me wet. I’d already had one bad experience with cold rain on the trail, and I didn’t want another. So I started out at 6am in the mist, up towards Unaka mountain.

The mist cleared in time for me to see the view from the ‘Beauty Spot,’ before climbing back into spruce-fir forest for the first time since the Smokies. There’s something magical about the change, as the open oak woodlands disappear and dense conifers close in, with knobbly roots covered with a carpet of needles and springy mosses that only seem to grow under spruce. You’re magically transported to New England for a few miles, and only the scattered rhododendron reminds you that you’re still in the South.

I pushed on past the next shelter, hoping to get close to Roan by nightfall. A mile and a half past Iron Mountain Gap is an old apple orchard with tenting and a spring, that also happens to be the one-sixth point if the trail going north. I stopped there and set up camp in a grassy field. 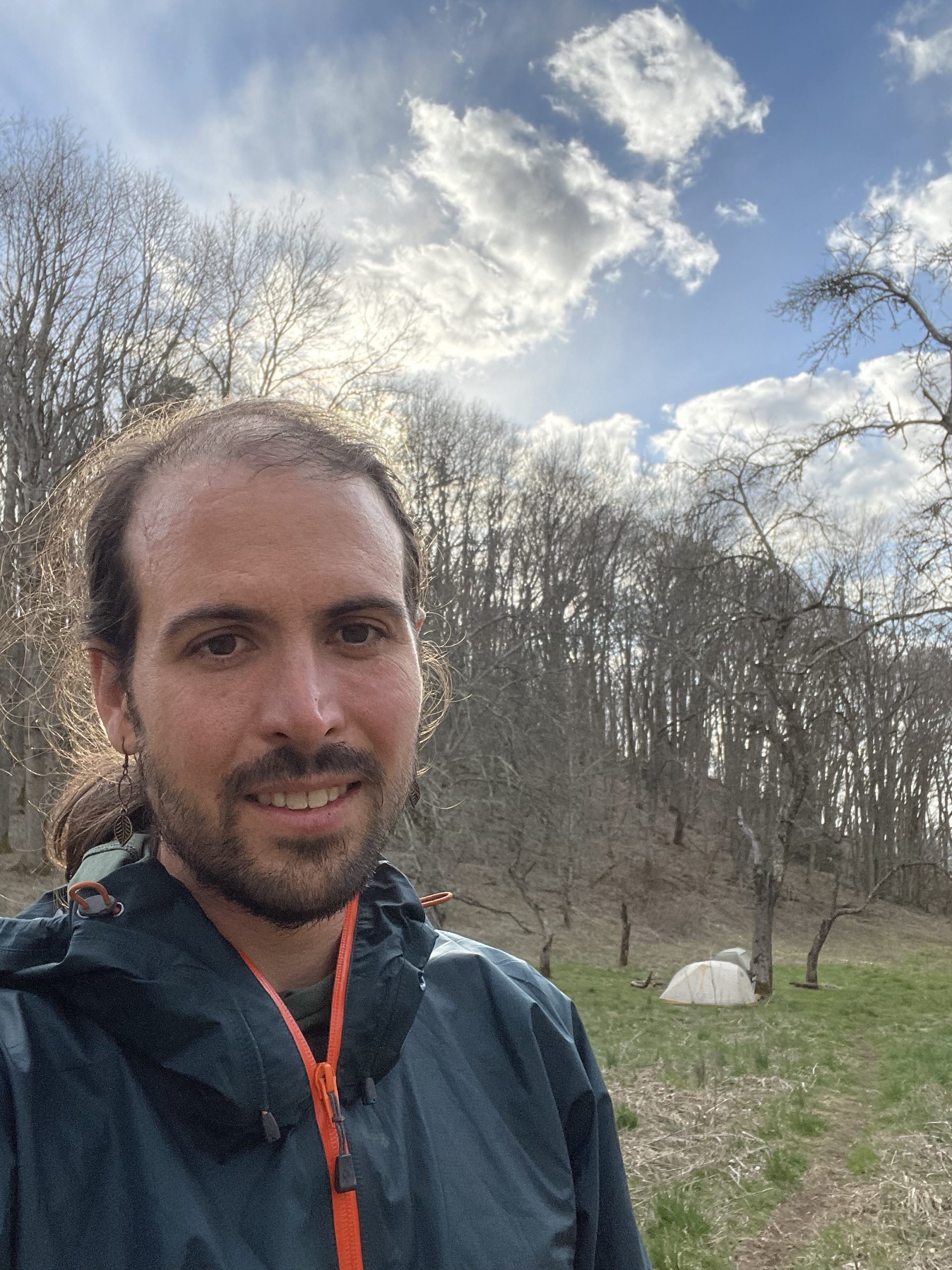 I’m happy because I only have to walk 366 miles five more times!

I had company that night. An older guy named Jukebox was there when I arrived, and a little later Woodstock and Lulu arrived. Woodstock is a younger guy from Pittsburgh who shares my love of foraging, and Lulu I can only describe as the most talkative person on the trail. She was from Maine and was just starting back on trail after catching norovirus. Woodstock was hiking with some friends, but had gone on ahead for the day. We spent a lively hour or two of trading stories, and settled in for the night.

I woke up early for a night hike before dawn. By the time the sun came up, I could see the huge bulk of Roan in front of me, and started the long climb up from 4000 feet at Hughes Gap. At 5400 feet on Beartown Mountain, I felt the first flakes of snow. By the time I reached 6000 feet, at the ruins of the Cloudland Hotel, that first band of showers had moved on, and I could see it blowing east across the Blue Ridge.

The next hour was another plunge into the firs. In early afternoon I climbed a side trail to the summit of Roan High Knob, where the highest shelter on the trail stands at 6200 feet.  It’s more a cabin than a shelter, with four walls and a door. As I wandered up to the pile of rocks that marks the summit, the snow started falling faster, and by the time I finished lunch the ground was coated in white. 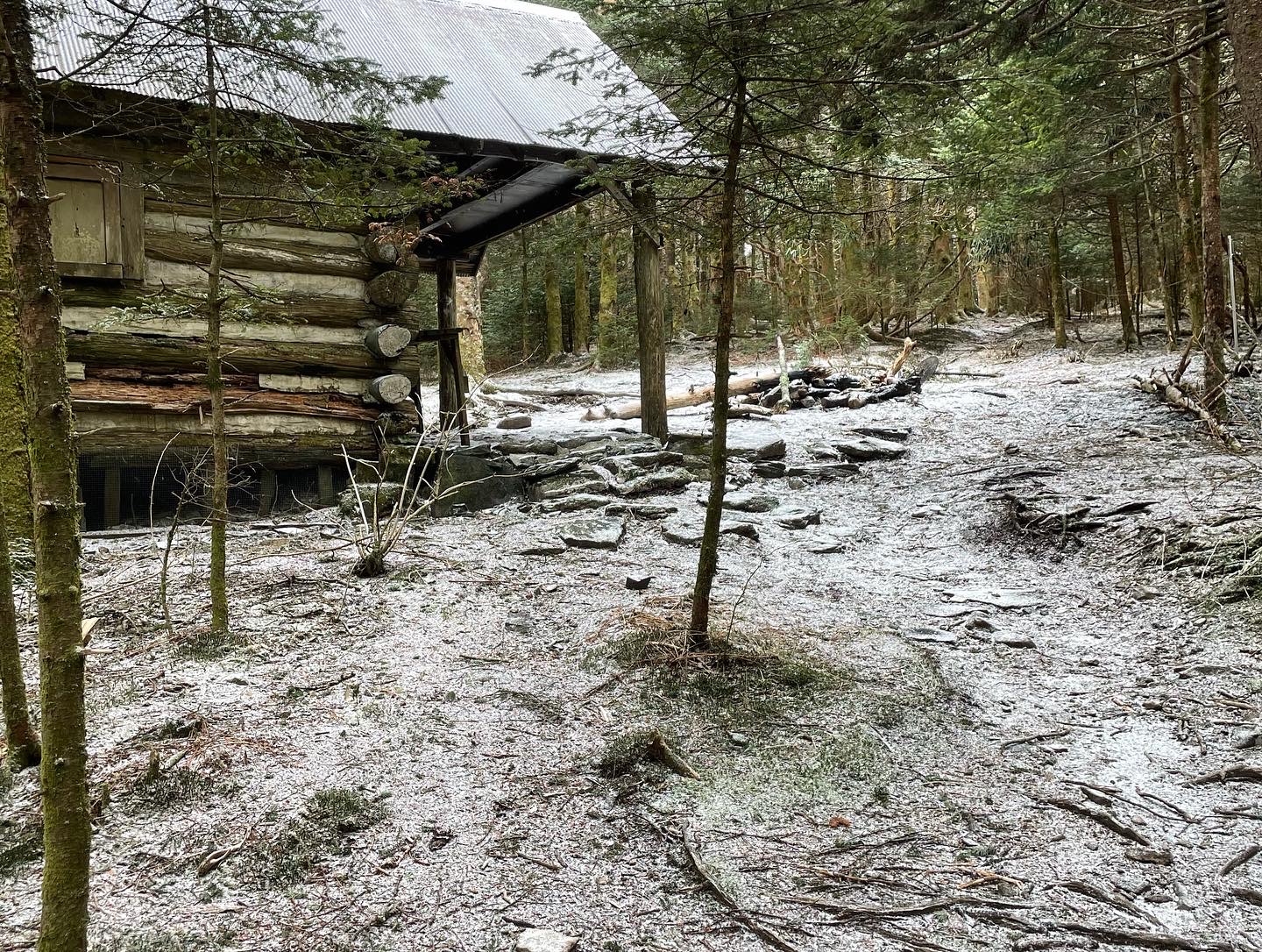 Roan High Knob in the snow.

The High Knob is only one part of Roan Mountain, and next I descended through the fir trees to Carver Gap, where the grassy bald begins. This is the Roan Highlands that all the hikers rave over, the flower-studded meadow where you camp in the fields and gaze out towards the horizon, the ‘most beautiful part of the trail.’

Well, maybe if you get here in May. During an April snowstorm, the highlands are beautiful in a very different way, a stark Rothko palette of brown and gray and white. The snow was still scattered when I arrived, and I could see far into the distance, where the white bands of showers obscured the mountains as they rolled through. On the ground, stubby brambles and dry stalks of grass stuck out of the barren ground, while massive granite boulders pushed up through the snow and the wind rushed through. It was beautiful, but also inhospitable. 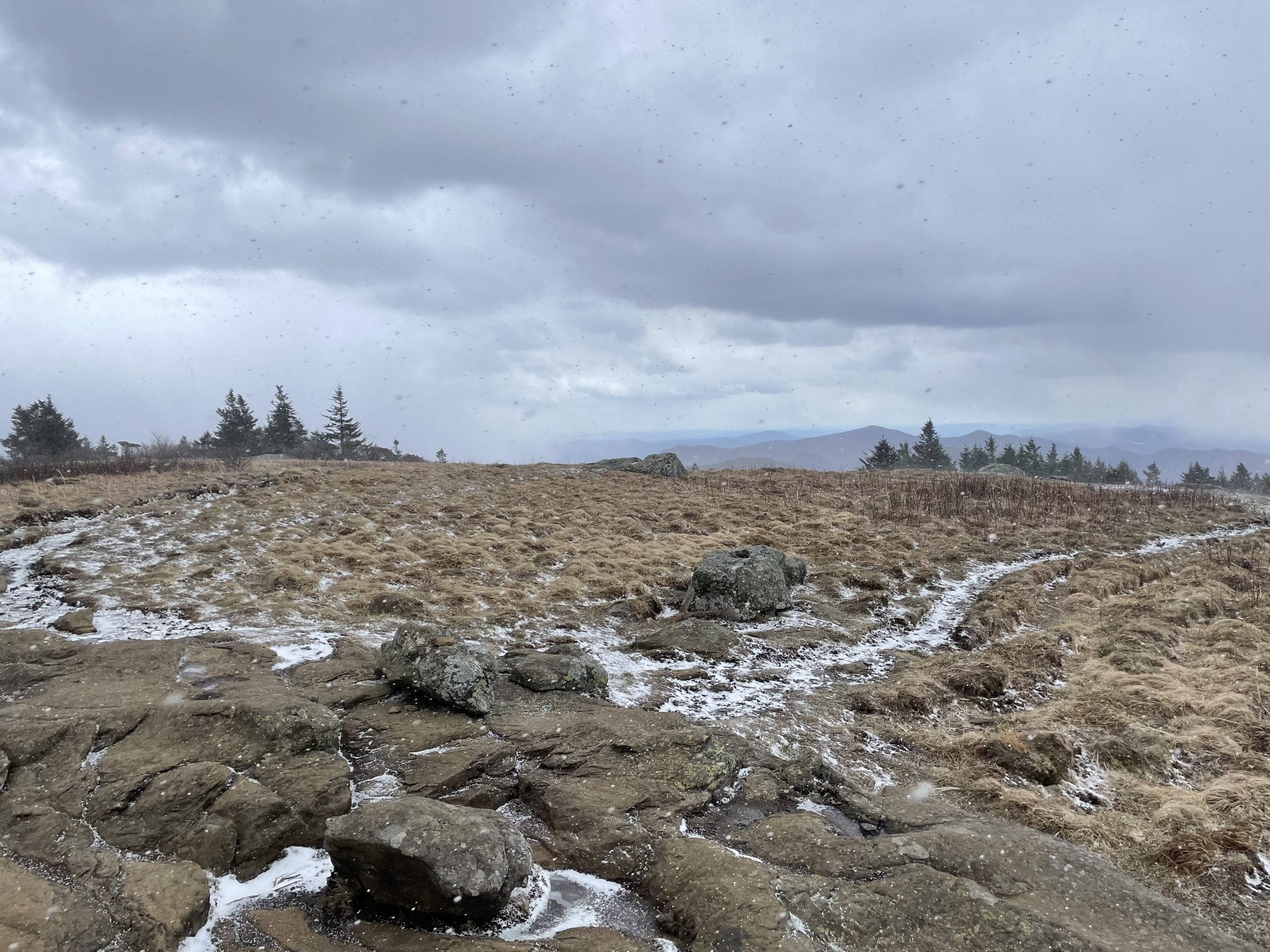 The view from Grassy Ridge Bald.

By the time I got off the bald, I was ready to stop at the next shelter. The snow was falling fast now, in big fluffy clumps. My boots were wet. I arrived at a ramshackle lean-to called the Stan Murray Shelter, where Woodstock was already set up in a tent. I was soon joined by his friends Goose Boots and Hummingbird, and all three of us set up tents inside the shelter. The wind was blowing snow in through every crevice, and every hour or two we had to sweep it off the floor. The temperature plummeted through the evening, and by the time we went to bed it was in the mid twenties. 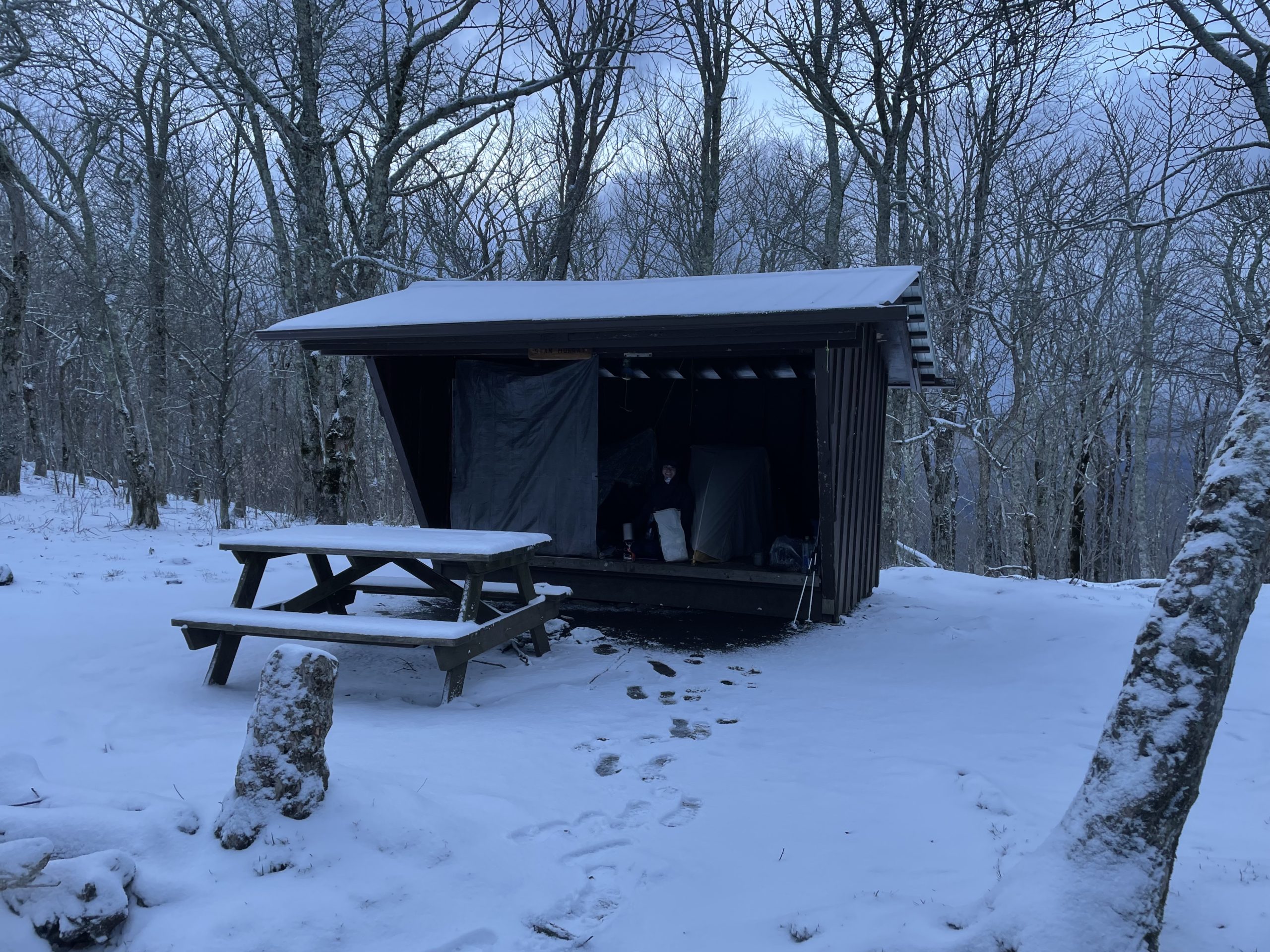 Settling in for the night. That’s Goose Boots in the shelter.

I left first in the morning, and trudged uphill through ankle-deep powdery snow. I was right about the effect of the cold — most snow fell off my boots and gaiters, and didn’t melt through. My boots were still frozen, though, and a little damp.

I was enjoying this wintry walk through the woods, and looking forward to a warm bed at the hostel I’d booked 11 miles ahead. There were just two small peaks ahead, Little Hump Mountain and Hump Mountain. I’d be over them in no time, I thought.

And then I came out on the bald. With no trees to block it, the wind roared across the open mountainside, pelting my face with heavy snow as it piled up drifts. The muddy ruts in the trail, which had merely been inconvenient the day before, now became hidden trenches of foot-deep snow. There was no view, only a surrounding haze of translucent gray, which shifted its hue as the snowfall ebbed and flowed. 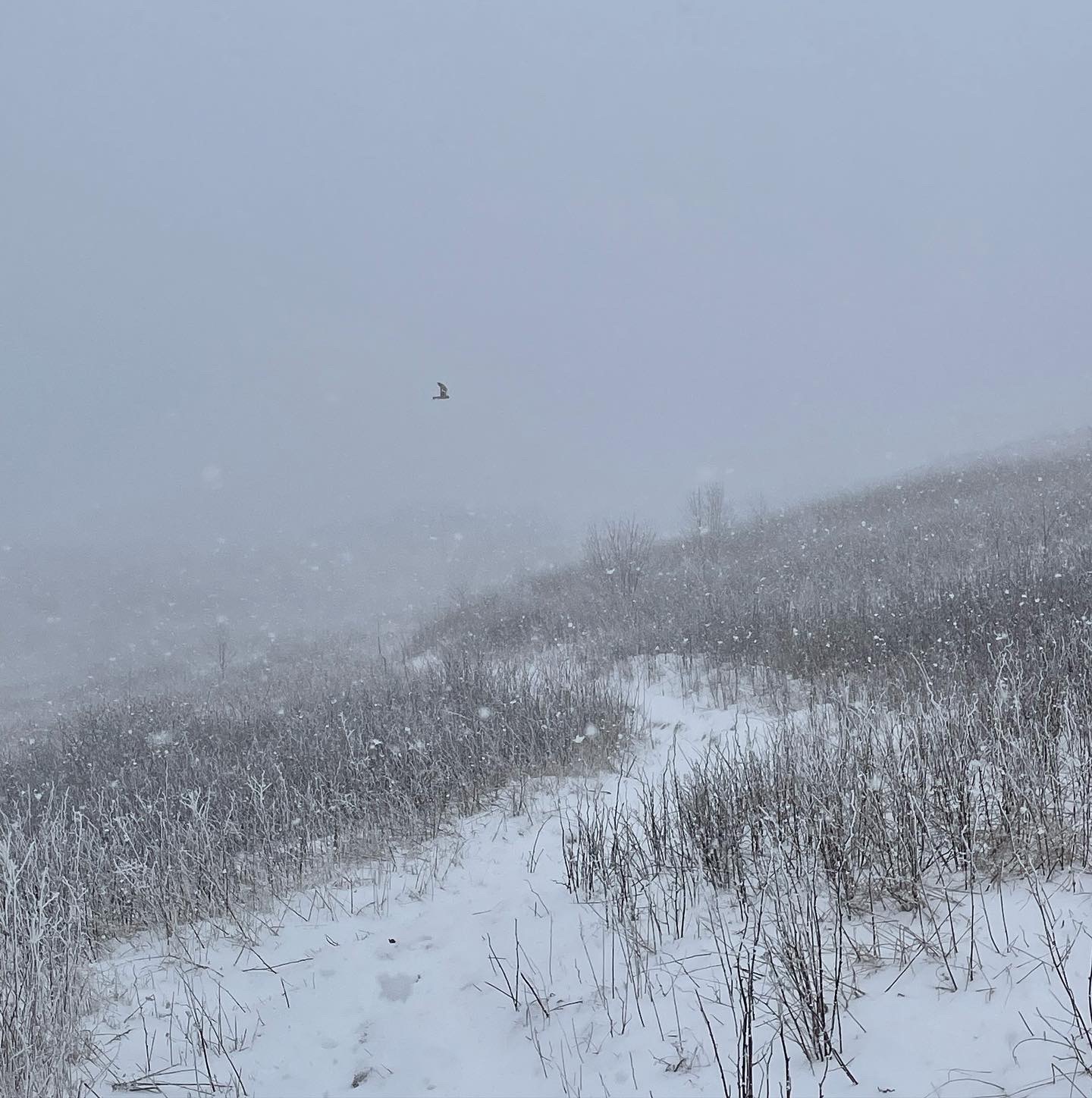 The hawk at Bradley Gap.

In the gap between the peaks, I startled a red-shouldered hawk, which circled and soared around me on the wind. At one point it seemed to hang motionless in the air while the snow blew around it and the stalks of grass bent against the breeze with their tails of ice. And then I started on the steep climb up Hump Mountain, pausing at every boulder at the edge of sight to catch my breath and take a moment out of the wind.

I was beyond relieved when I finally walked off the bald and back down into the trees. A few miles later, I reached the sign marking the last crossing of the NC/TN border, the ‘official’ start of the trail’s Tennessee section. I heard voices behind me, and saw Woodstock and his friends catching up behind me. They’d been following my tracks across the bald. Together we hiked down the slopes towards the road crossing, watching the snow thin on the ground until it vanished entirely at 3200 feet. The valleys were green. 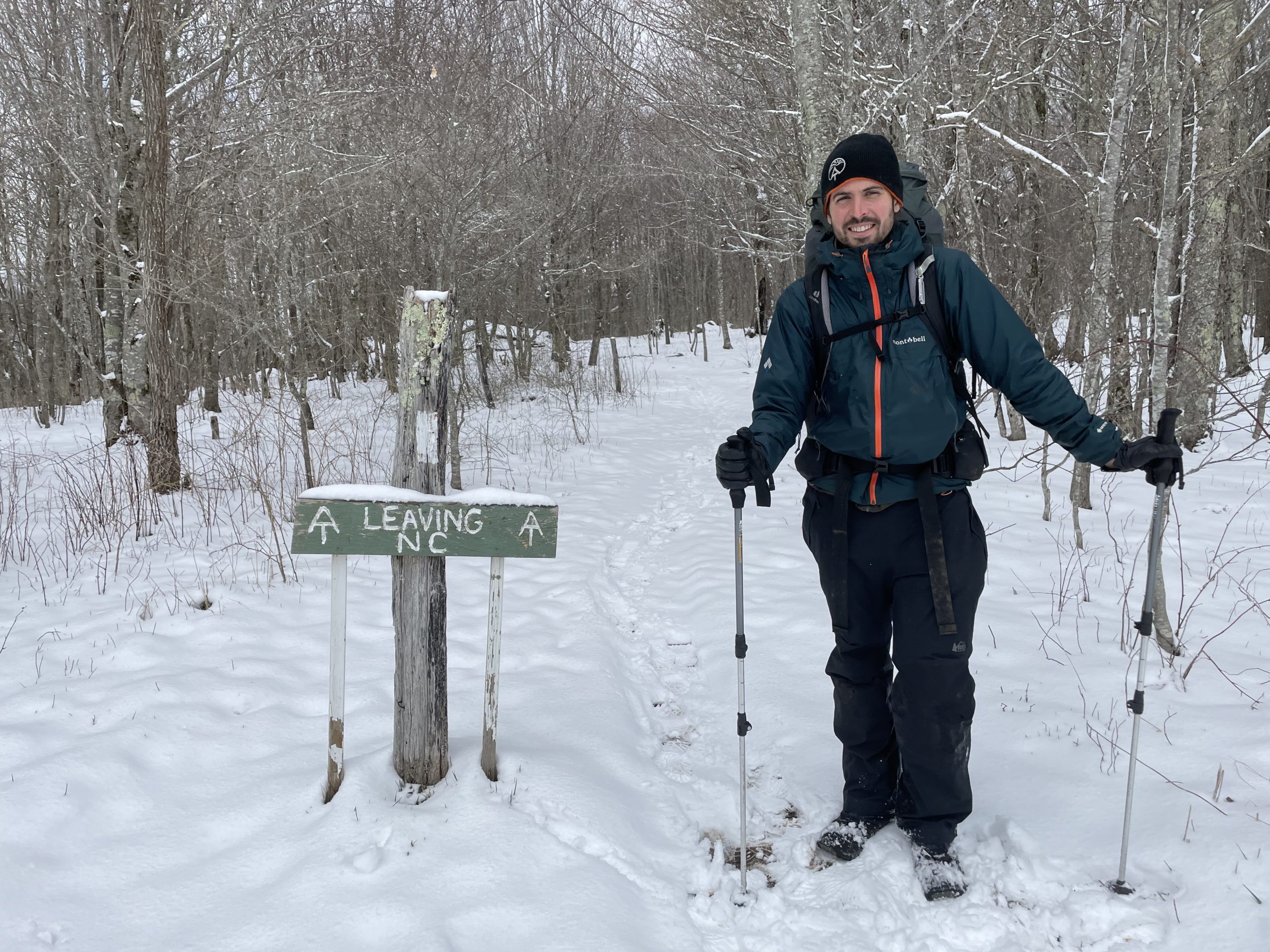 Leaving North Carolina behind for good. Photo by Goose Boots.

The others didn’t have a place reserved for the night, so they went over to The Station at 19E, which had converted its music hall into a hiker shelter for the night. I came along with them on the shuttle and got some hot food at the bar, before going over to my own stop for the night, Mountain Harbour B&B. This place is reputed to have the best breakfast on the trail, and I was looking forward to a warm bed and a meal.

I arrived to find a motley crew of hikers inside, collected from various points along the trail. Some of them had been shuttled from Carver Gap. Others were even further back, at Hughes Gap. They’d all come here for shelter from the winter storm. A few, but not many, had also spent the night in the highlands. 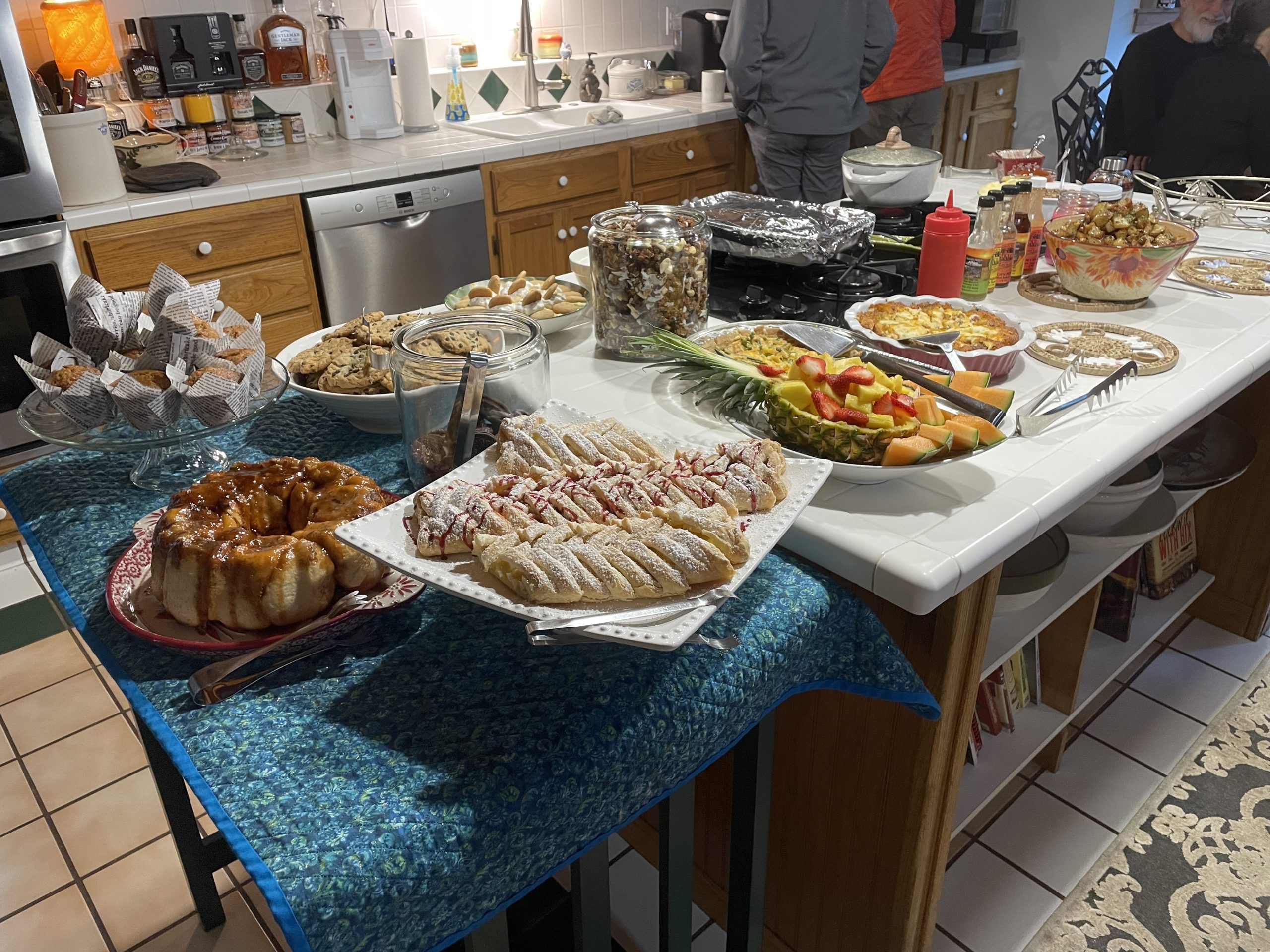 The ‘best breakfast on the trail’.

Breakfast the next morning was as good as advertised, though I did think they made too much of a fuss about it. I had a hash brown casserole, a slice of quiche, an egg and cheese casserole, and a truly extraordinary chocolate chip muffin. The only thing that was missing was fresh milk for the coffee. I left the Harbour feeling refreshed and ready to walk a long way. 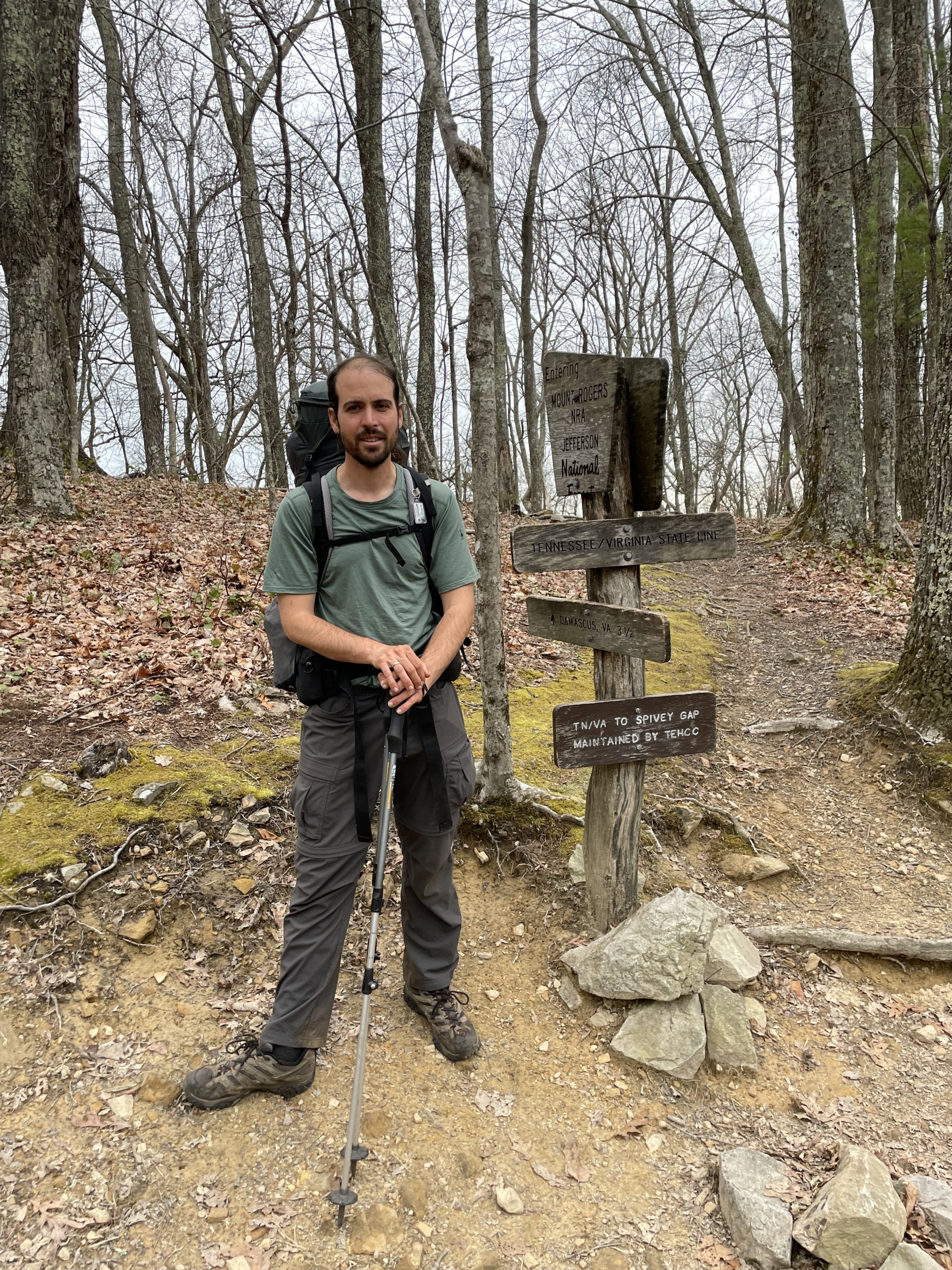 Three states down, eleven to go!

That was five days ago. The last 80 miles have been the easiest I’ve seen, as the steep southern highlands recede into the distance and the trail enters easier terrain. Roan Mountain is the last 6000-footer till New Hampshire, and the trail barely tops 5000 feet between here and there. Past Watauga Lake, I climbed onto a dry stony ridgetop called Iron Mountain where the trail heads straight for Virginia. A day and a half later, I arrived here in Damascus, a major milestone that marks the end of the beginning of the trail.

I’ve heard a lot of stories about the snow since it warmed back up. Lulu was shuttled to 19E at Hughes Gap, and got involved in an incident there that’s taken her off the trail for a few weeks. Another guy there got very drunk and walked five miles southbound up the mountain in the dead of night, setting up his tent at 4am on Hump Mountain. And Stomps, who I’d hoped to see soon on the Virginia trail, caught pneumonia in the storm and is off-trail recovering. This last blast of winter hit the hikers hard, and I’m glad to be down at 2000 feet where the leaves are coming out and the birds are singing. Next comes Mt Rogers and the long, straight, ridgetops of Virginia.