So People Are Thru-Hiking the Appalachian Trail Already?

In the moody depths of big city winter days, it comforts me to remember that someone is always hiking somewhere on the Appalachian Trail. It has come to my attention that there are already numerous persons attempting thru hikes as I write this. I would like to note two of them. The first hiker I shall mention briefly, but his hike is especially notable as he is attempting a southbound (SOBO) thru hike of the AT beginning in January. I’m sure someone out in the hikersphere will ask how he was able to start at Katahdin in January, but for my purposes I’m interested merely in noting the man’s existence on trail in New England so early in 2016. He goes by the handle of “The Real Hiking Viking” and is a former AT thru hiker and an American combat veteran, an alumnus of the Warrior Hiker organization’s “Walk off the War” program. I mention him because he has been posting some beautiful pictures of his (utterly frozen) SOBO hike on Facebook.

The other guy I know personally. His trail name is AK and he hails from Tampa, Florida. I met him on the trail in 2011 while he hiked with one of the most jovial and jocular hiking crews I’ve ever run across. While his 2011 trip ended halfway to Katahdin, he has returned with a vengeance in 2016 as he began a NOBO hike on January 6, according to his Appalachian Trail Journal, “AK’s 2016.” He contacted me from Neels Gap on January 8 and said he had made it there from Springer Mountain in “two and a half days.” From the comfort of my bed I watched the weather reports for the north Georgia mountains that week. There was rain and then some especially cold nights. AK checked in from Helen on January 9, where he waited out rain. I heard from him last from Hiawasee on January 12 where he planned to visit the famous buffet at Daniel’s Steakhouse. He said single digit nights had not kept him from “having a blast.”

The seemingly insane optimism of a January start to a thru hike constitutes a retaliation upon the assault of the gloomier emotions of the season. Most of us in North America are sealed tight indoors, logging extra screen time with the TV or smart phone, or otherwise absorbing phantoms by reading, but also, ruminating on death with the inevitable celebrity deaths in January. (RIP David Bowie). Or maybe we are indoors following the Presidential campaign, which is perhaps worse than ruminating on death. Having logged some days and weeks winter hiking, I can say honestly that the winter trail (at least in the southeast) is a great place to shake off the winter blues. That seems to be AK’s plan anyway. At the very least, there’s nothing like having a front row seat for the first tendril of spring. Some of us like to arrive early for the show.

I remember some of the guys hiking with AK in 2011: Bum Knee, Evergreen, Mainiac, and John Wayne. They always collaborated on a good fire every night. AK still talks to Bum Knee, who apparently is a holdout from social media. I am Facebook friends with Evergreen and Mainiac, and Ducky (who hiked the Smokies with me) guys who were pretty young when they hiked the trail and seem to have grown up a great deal in the last five years. I have been fortunate enough to experience the onset of middle age. All of us hikers are connected, as are so many other hikers from 2011, by John Wayne, a Bay Stater who died in a climbing accident a few months after completing his thru hike. In my text messages with AK, I asked him to “Say hi to John Wayne and Curtis from Standing Bear Farm” (both deceased). Then I cautioned him not to go looking for 2011 up in those mountains.

That my friends is January: cold and death. The stripping away of the last brown leaves of the Tree of Life and revealing the Void. The sun shines some days though, and the days get brighter. Remembering the spirits of our comrades, living and dead, we shoulder on because there is still desire to live inside our warm mammal bodies. There is no better cure for the winter blues than pumping the blood with a bracing saunter in the cold air. It is too shivering inside a sleeping bag on a single digit night to worry about the past. In other blog posts you can read my numerous cautious statements regarding the dangers of hypothermia. One should always be prepared for the conditions when visiting the back country, including iced over trail. I assume an extreme athlete like The Real Hiking Viking knows what he’s doing. AK is pushing his own limits with the cold in his hike. I can only hope these guys protect themselves and exercise caution relative to the risks of winter hiking. I am certain, despite the miseries of the conditions, they are absorbing the otherworldly beauty of the winter mountains. 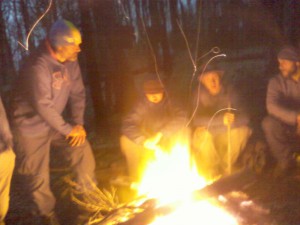 In 2011, AK started out hiking with an early bubble of hikers. I am curious how his January start this year provides a different experience. Fewer people, seasonal unavailability of services, and a greater ratio of harsh weather will necessarily make it a different kind of hike. His last two Trail Journal posts mention meeting other NOBOS– finally. So it seems the much anticipated 2016 Appalachian Trail thru hiking season is well under way with people attempting alternative hikes. Here’s wishing everyone safe travels and happy trails in 2016. Don’t forget to leave no trace.