Days 76 to 79   June 29 to July 2
After our Trail Angel dropped us off at the Walker Motel in Bland, the first thing we did was take off our stinky, nasty clothes and wash them in the sink so they would have time to dry overnight on the clothesline behind the motel. (Sadly, there was no Laundromat in Bland). We then put on our ‘sleeping clothes’ (shorts and shirts that aren’t as stinky as our trail clothes that we only wear to sleep in–or wear around town when our stinky clothes are wet) –so that we could go across the street to the DQ for something to eat. 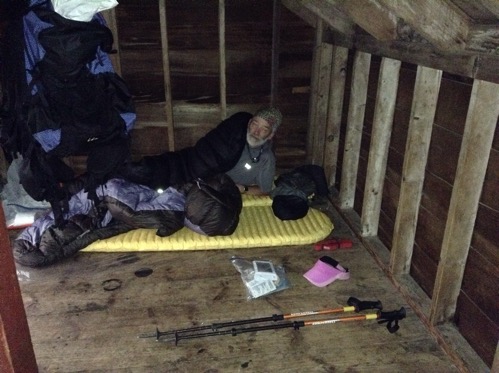 Sleeping in a shelter while our stinky tent airs out!

But before we could eat or shop, we had to look up recipes online for getting skunk smell out of clothing! The consensus seemed to be a combination of either vinegar or hydrogen peroxide, baking soda and Dawn detergent–all of which we would get at the Dollar General after lunch. 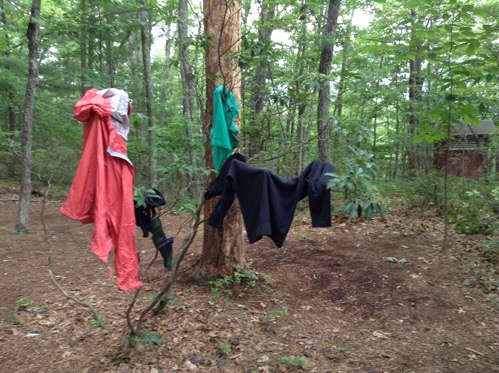 Airing out my wet, stinky clothes!

As we were ordering our lunch at the DQ, a kid behind the counter said, “Ewww, I smell a skunk!” (So much for thinking we had untainted clothes on). I think the smell was coming from the fleece jacket I had on–but it had been in the tent, in a mesh bag, inside my Buff that was acting as a pillowcase. The Buff didn’t stink so I didn’t expect that the fleece would stink. I felt like a social pariah! 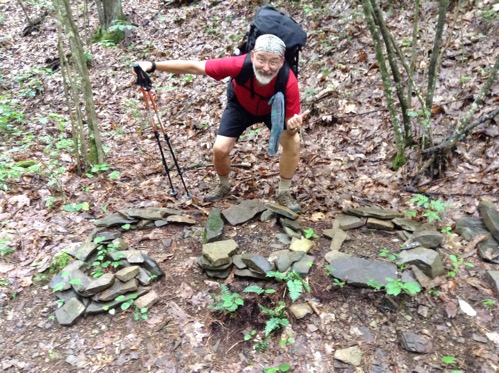 When we got back to the motel, Backfire and I looked on the internet for ‘characteristics of rabid skunks’. A rabid skunk, we learned, loses it’s fear of humans and may act aggressively. BINGO! That was our skunk. I’m glad Mel didn’t get bitten when he punched him in the face! 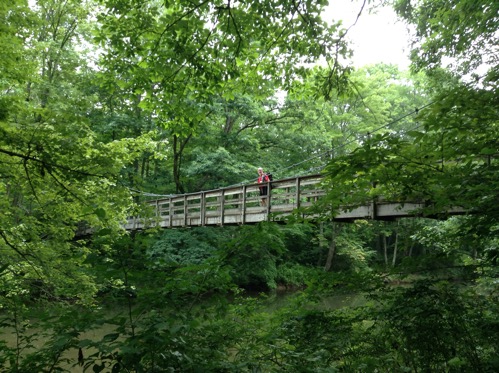 A beautiful bridge along the way.

After soaking my backpack and fleece jacket and other tainted items for hours in our ‘magic solution’, we were able to leave Bland the next morning smelling better than than when we arrived–but we were still stinky! Oh well, once we were back in the woods where everyone stinks, no one would notice!

Ten minutes back into the woods, two bear cubs crossed the trail about twenty yards ahead of us and scurried up a tree! We backtracked a bit, made some noise and waited for 15 minutes to give the cubs time to rejoin their mother –who surely must be close at hand. It was my first bear sighting!
An hour and a half later, Backfire and I were sitting on a big rock taking a snack break when we heard the loud crack of a limb about 50 yards away. At first we thought it might be just a branch falling from a tree–or, perhaps, a very large animal. When the second crack came, our senses were on high alert! 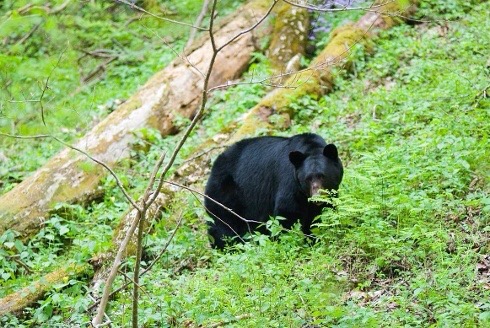 I did not take this picture, but it’s what I saw!

“IT’S A BEAR! AND IT’S REALLY BIG!” I said nervously.
“Make a lot of noise while I pack things up! Mel quickly instructed.
I scrambled up on the rock where we had just been sitting and waved my hiking poles while simultaneously yelling, “YOO-HOO! YOO-HOO!”

I know, I know. It sounded like I was inviting the bear to join us, but it was the only thing that came to mind when Mel said to make a lot of noise!
At any rate, the bear was sufficiently scared and it lumbered away. Mission accomplished!

After our two bear encounters, we had a bit further to go before coming to the road that would take us to Trent’s Grocery where we could get a fresh pizza for lunch! What a treat on the trail!

Backfire and I spent an hour or so eating and relaxing before returning to our backpacks on a bench outside the store. One of the hikers, who had been sitting near our packs, commented to his buddy, “Man, I keep smellin’ skunk! Do you smell it?” Social pariahs again! (I guess we needed to get back into the woods quickly where only the animals would appreciate our aroma!) 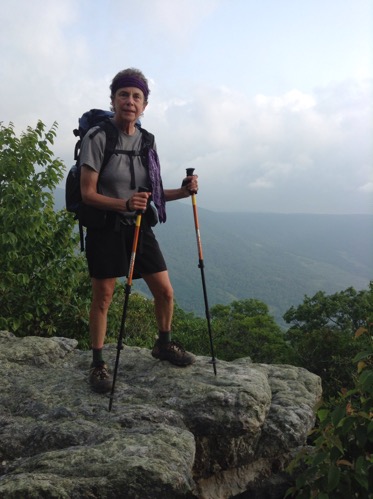 As we were walking back into the woods, a car pulled up beside us and the young man inside said, “You folks want some Gatorade?” We thanked him, but politely declined since we had just tanked up on soda at Trent’s Grocery. Then he said, “You want some candy?” (Uh-oh, candy from strangers in cars! Should we run?) He held out a large bag of bite sized chocolate bars and we both grabbed what we could before the car coming up the road rear ended our Trail Angel! We quickly thanked him for his kindness and walked away happy with our chocolates and pleased that he didn’t make any any inquiries as to the possibility of skunks in the area!

After all the stress of dealing with the skunk, it was nice to have some easy walking and pleasant weather on this section of the trail, plus, on our third night out, we would be staying at the Woods Hole Hostel! 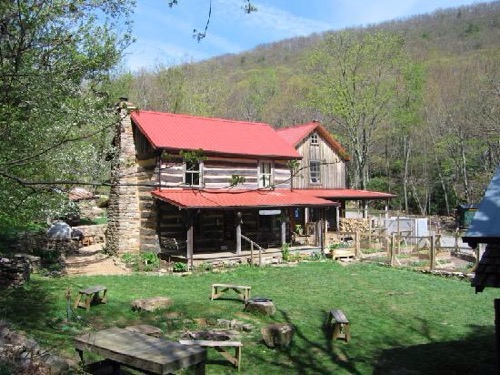 Woods Hole Hostel is a charming little mountain retreat that was built in the 1880s and has been used as a hostel since 1986. It’s only a 1/2 mile off the trail and very much worth the extra bit of walking it takes to get there. 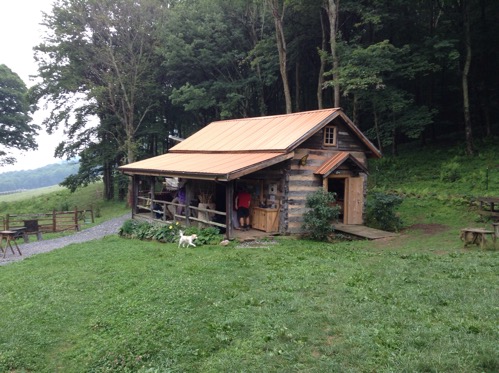 The bunkhouse at Woods Hole

It’s a restored farmhouse that was once owned by the present owner’s grandparents; a wonderful little place with raised bed gardens, pigs, goats, West Highland sheep and beehives. 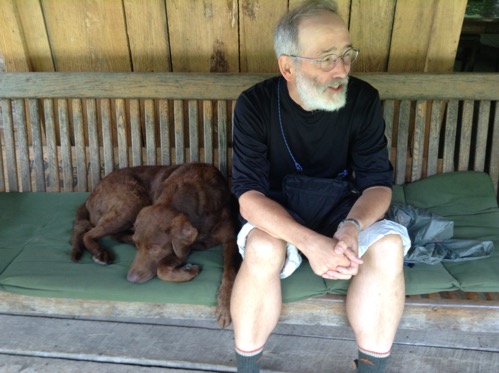 For dinner, everybody pitches in. It was amazing how Neville, the granddaughter of the original owners, orchestrates the whole affair. On the night we were there, two people were peeling boiled eggs for egg salad, one person was chopping onions, another was crushing garlic, while I chopped parsley, sliced mushrooms and cut the cheese! 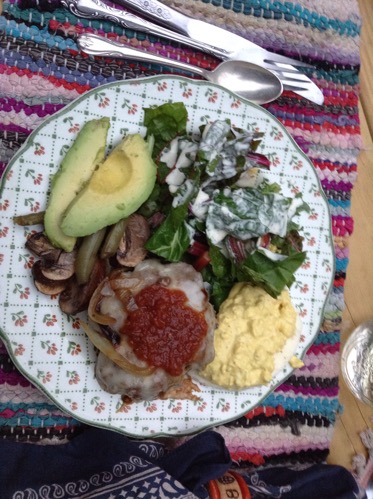 Dinner that night consisted of a beautiful salad made of fresh greens from Neville and Michael’s raised bed garden topped with homemade salad dressings. We also had freshly made egg salad, sauteed onions and mushrooms, burgers with baby swiss cheese and homemade ketchup; sliced avacado, homemade aioli and homemade bread. For dessert, there were homemade brownies with ice cream! It was all so delicious –and it was fun talking with all the hikers.
After dinner, we headed upstairs to our bed in the bunkhouse. 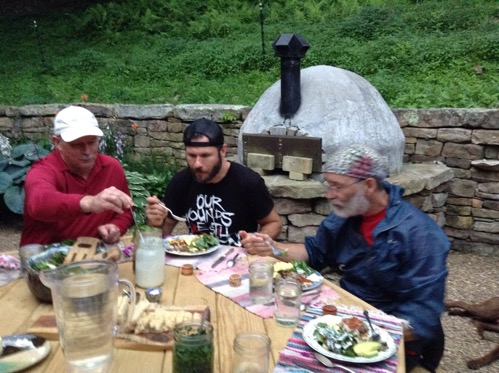 Sharing the bounty with fellow hikers

Fortunately, we didn’t have to pull anything out of our packs that smelled skunky. So, blessedly, no one had the opportunity to comment about the presence of skunks in the area. Backfire and I had the chance to make new friends without the fear of being shunned! 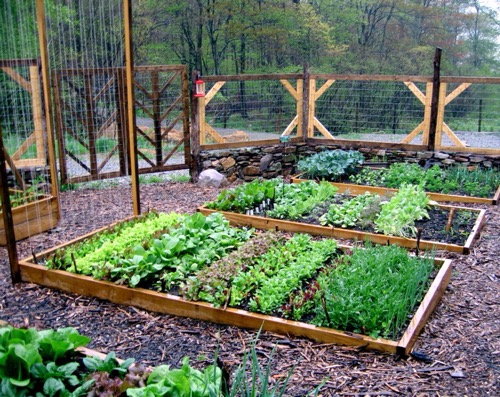 Our last day on the trail before reaching Pearisburg, VA, was pleasantly uneventful except for an hour or so of heavy rain and two miles of slippery downhills. Piece of cake! 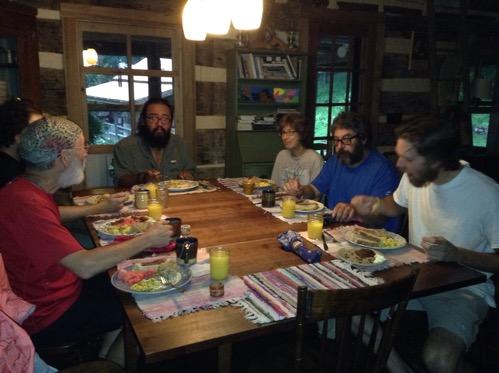