I started off the day bittersweet, saying goodbye to Louis. He hiked my first few days with me to see me off, but it was time for him to go home. On the drive to Hogpen, where I left off, I was panicking. The low for the night was in the low 20’s, making me rethink my whole adventure. Having Louis by my side during the craziness of the past couple days made even the worst times seem ok. I was tempted to tell him to not stop and drop me off at Hogpen and to drive straight back to Virginia… but quitting my adventure this early over a fear of one cold night would be silly. I talked through my fears with Louis and got the confidence to continue on my journey.

We said our goodbyes, Louis left some trail magic, and I was off. I had 12 miles ahead of me and while it was pretty flat, I had a late start so I was nervous about getting in before sunset. 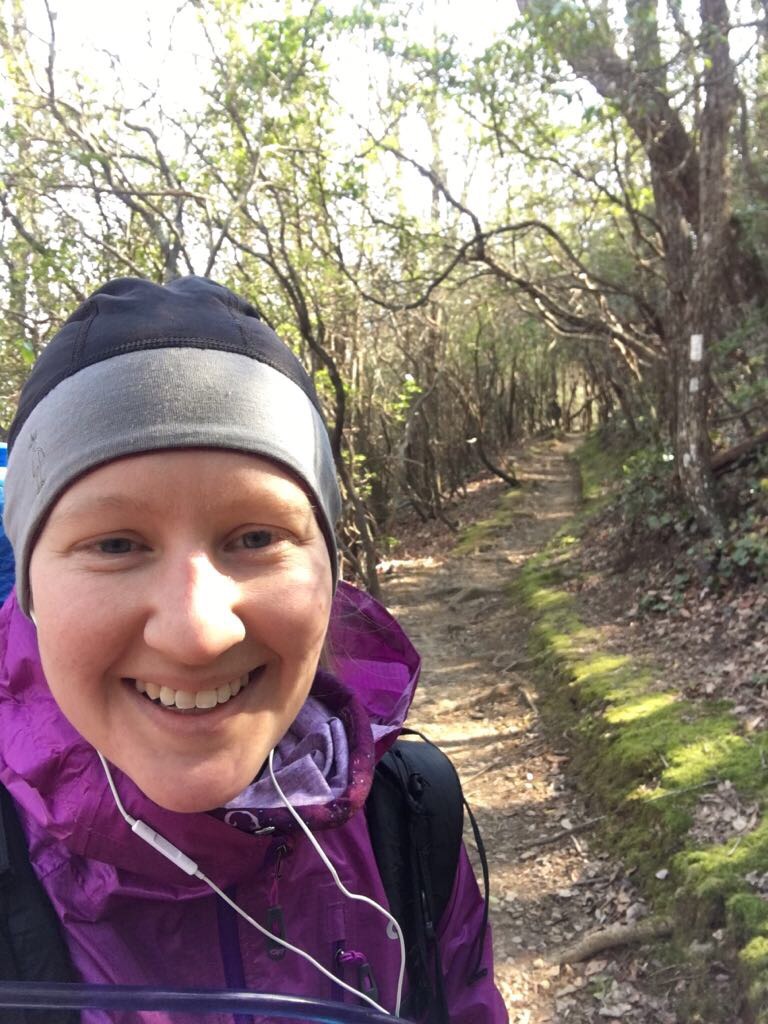 The wind was howling at the base of Hogpen and the temperature was in the 40’s. I was already layered up to my rain jacket for warmth even though the sun was out in full swing. Hiking up the mountains, the temperatures increased, but stepping into any shady tree patch felt like stepping into a freezer. It made me even more nervous for the weather tonight. 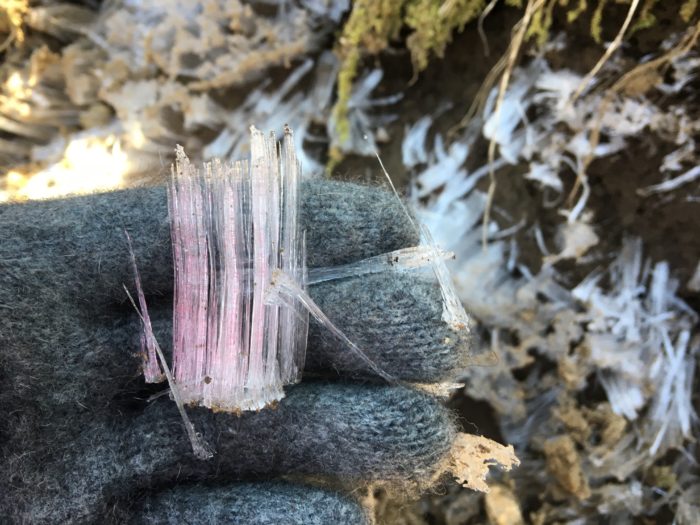 Around mile 10, I was starting to get emotionally and physically tired. I missed Louis and I just wanted to get to the shelter and get cozy in my sleeping bag. But the trail dragged on and around every bend where I thought I would find the shelter, it was nothing but trees. The terrain was rocky and uneven. I was leap frogging with a girl named Bottles, which thankfully made my misery less miserable. We chatted for a bit and my spirits lifted. After what felt like ages, we finally got to the shelter around 5 pm with some daylight left. Bottles then bravely continued on to Unicoi Gap to meet up with her friends. 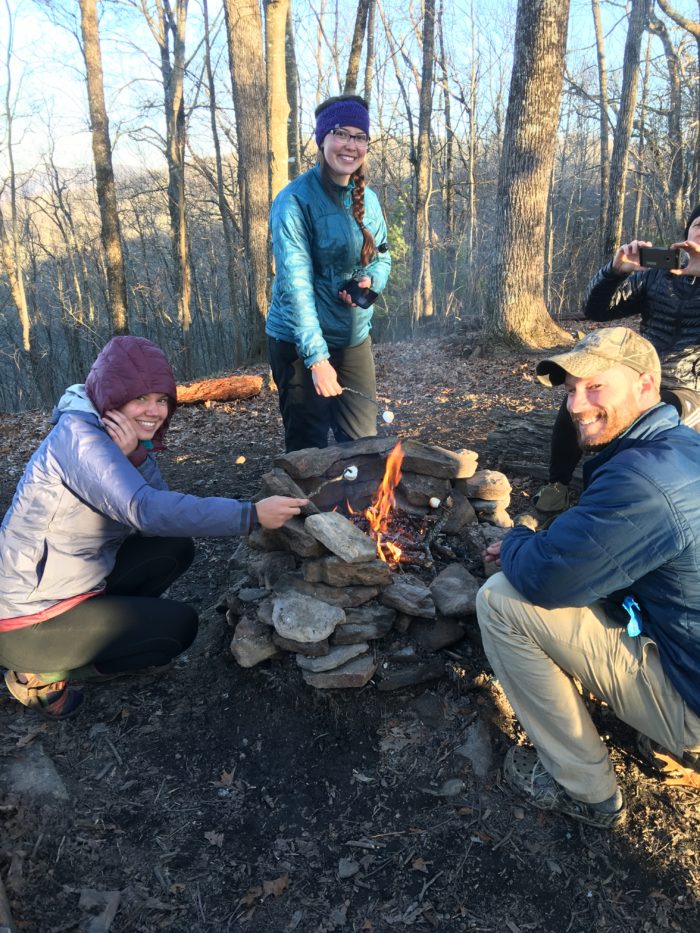 I ate mac and cheese and grumpily wished Louis was enjoying it with me. My mood perked up when I found out Sticks and Coffee were there, two hikers I met on my first day. Sticks made a fire and we hung out with another two hikers (a Canadian chef and a Hispanic man) who were doing 20-30 mile days already (they were on day 3). They only have 3 months to complete the trail. We all ooed and awed over their accomplishments. Sticks, Coffee, and Sarge are going into town tomorrow. My itinerary has me going 15.7 miles tomorrow to Deep Gap shelter, but there are a lot of climbs in that stretch so I might cut it short. 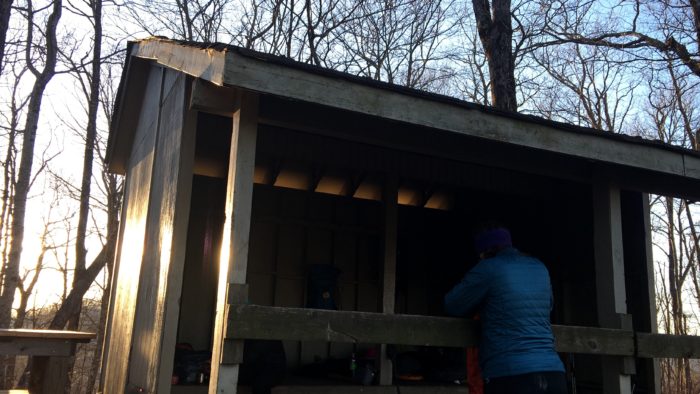 Blue Mountain Shelter, the first shelter I slept in

We all turned in, and I’ll have my first experience in a shelter tonight! Hopefully, we’ll all stay cozy. As I’m writing this, I hear either coyotes or wolves howling far away. It sounds like the ‘twilight bark off’ from 101 Dalmatians. I had no idea either of those animals existed in Georgia. If I remember tomorrow, I’ll ask Sticks about it. Hopefully, they don’t have a taste for tired hikers.

I woke up this morning feeling toasty warm. I was so proud of surviving the crazy temperatures of the night, even thinking to myself that it didn’t even feel as cold as the forecast was calling for. Well, that’s because it wasn’t. A fellow hiker, named Popcorn, had a thermometer that confirmed the overnight low was 29. A far cry from the low 20s it was calling for.

I had cracked open the hand warmers provided by our shuttle driver last night in anticipation for the frigid temperatures, and they were still warm when I woke up. It was awkward to hold them in my hands and grip my trekking poles, so I repurposed them as ear warmers. 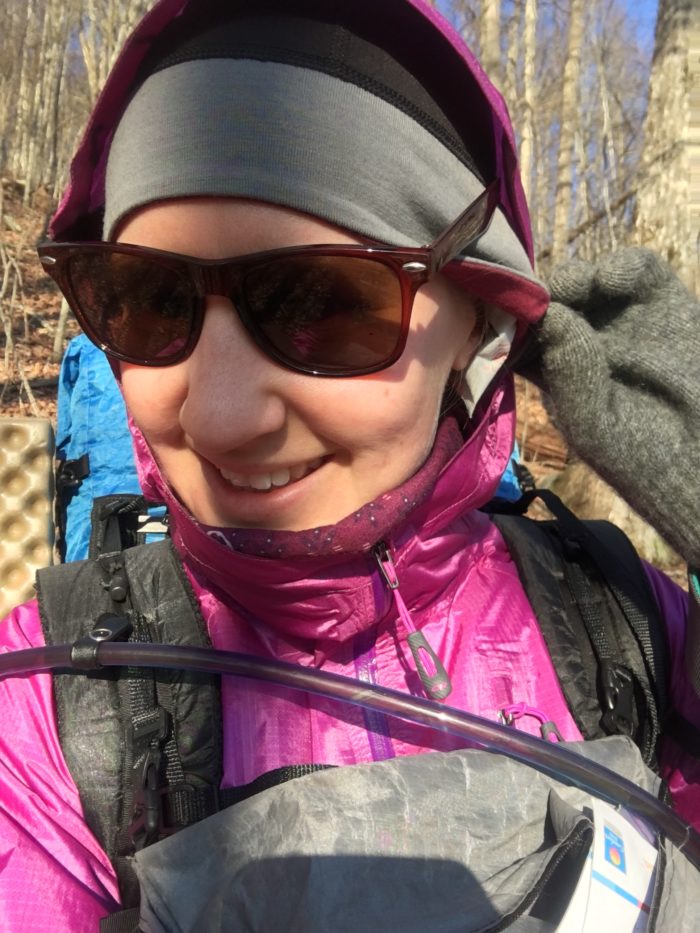 I was one of the first people out of the shelter and packed up my stuff quickly to head out. I said goodbye to Sticks and Coffee, which was sad because it would have been nice to have familiar faces to hike with. I had a rough day of hiking today. It was my first full day without seeing Louis and I hiked alone all day, just seeing the occasional hiker. The solitude wore on me emotionally.

I had a fall early on while walking on what I thought was a wet rock, but was actually a rock covered in a thin sheet of ice. It was difficult to get back up, and I felt like Bambi struggling to stand.

Luckily, I didn’t have any injuries from the fall but my pack was not so lucky. An upper strap on my chest pack broke, so I rigged it with a piece of strap until I could have time to sew it back on. I was fortunate considering more important things could have broken (like my bones). 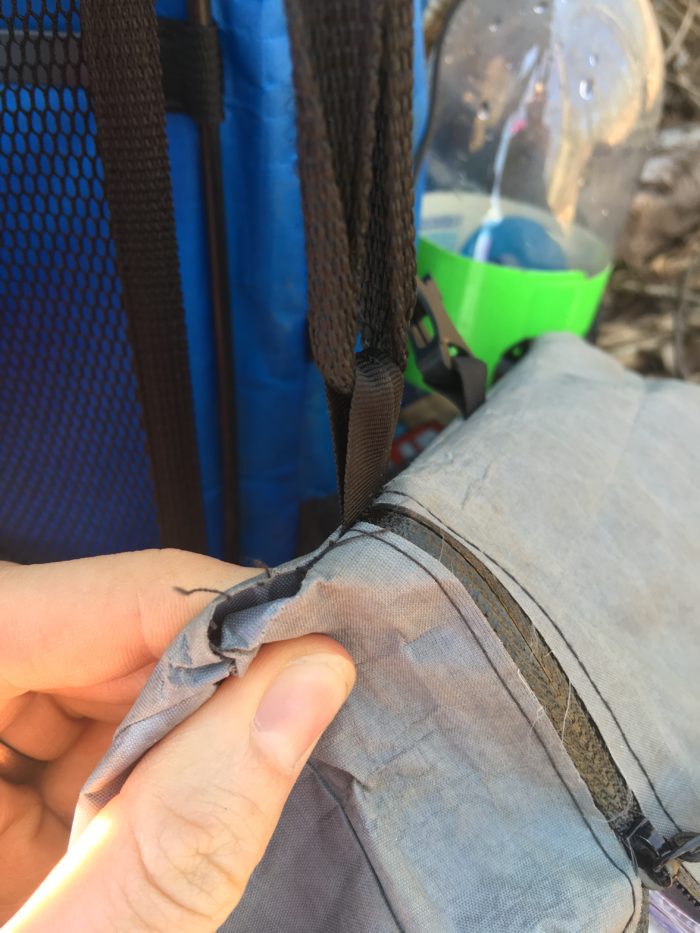 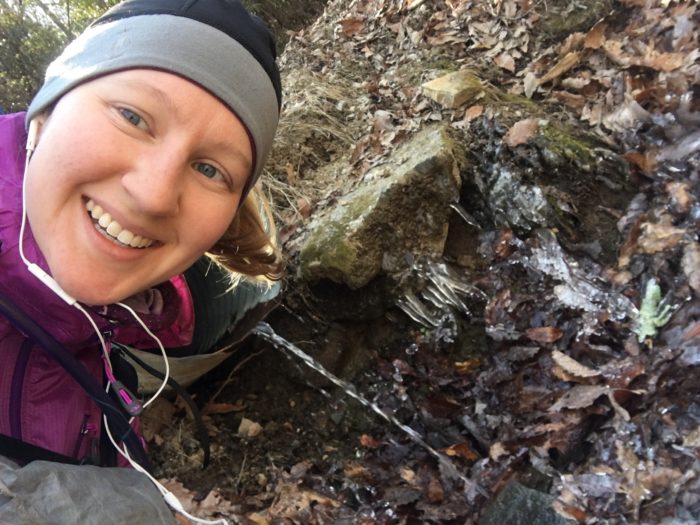 I had a couple steep climbs today. Initially, the physical aspect seemed to be getting slightly easier, and I felt like I’m getting slightly faster. On the second mountain, I started getting sharp, angry cramps in both my calves that hurt every time I walked and was worse every time I took a step down a rock. I stopped after the mountain descent, sat on the edge of the trail feeling tired, lonely, and defeated. I didn’t think I was going to make it to Deep Gap shelter like on my itinerary. I had done 8 miles but I still had 8 more to go and I was emotionally drained. I turned my phone on and used precious battery life to call Louis and text my family which lifted my spirits enough to keep trekking. 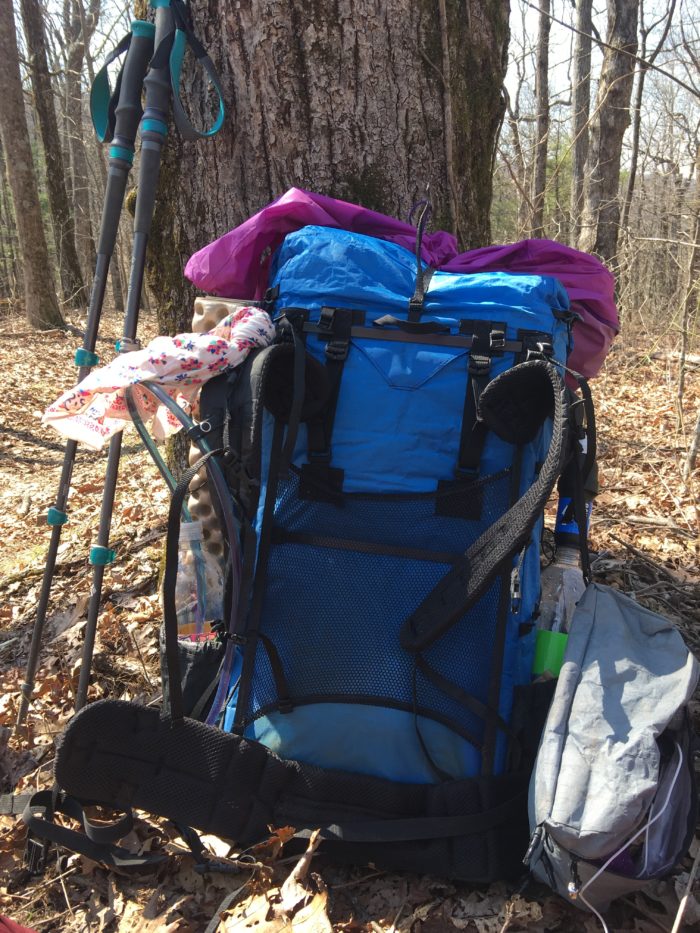 A little later down the trail, I saw a pair of bright blue nuthatches that stood out against all the brown, and watched them dig around the trees for a few minutes. So far, I’ve only seen dark eyed juncos, and seeing the nuthatches was a nice reminder to enjoy nature and beautiful scenery despite my fatigue!

I turned on some music even though my phone battery was running low because I needed a pick-me-up to keep going. Before reaching Deep Gap, I knew I had one more huge steep ascent to go, then a downhill before arriving. As I was plodding along thinking about the huge mountain I’d have to climb, I see a girl walking towards me with street clothes, no pack, drinking a corona. She looked very out of place in the middle of the woods. 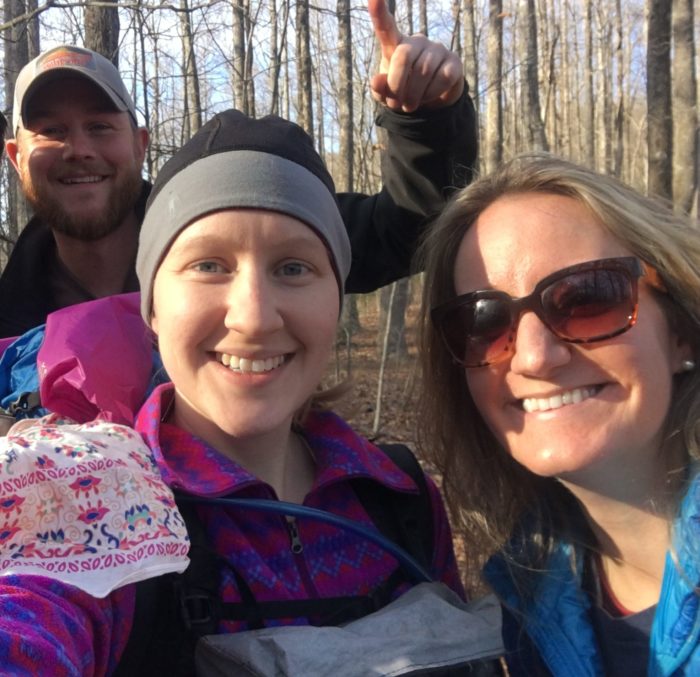 She introduced herself as Carrie and said her boyfriend was down the trail grilling hotdogs, and had snacks and drinks for thruhikers. If I didn’t smell so bad, I would have hugged her!! We walked down to the clearing together and another pair of hikers with a dog was there. I pet dogs like it’s my job so I immediately asked if it was friendly then snuggled the heck out of the pooch. I chatted with the boyfriend, who thruhiked the AT in 2012 (“class of 2012” in hiker speak). I didn’t have long to spend there if I wanted to make it to Deep Gap by sundown, which was coming quickly. I stayed long enough to eat a freshly grilled hotdog that tasted like it was made in heaven, snuggle the dog some more, and thanked them profusely for their trail-angeling. I took a handful of chips to go.

After a really terrible day of feeling defeated and wanting to go home, these trail-angels gave me motivation to hike on. 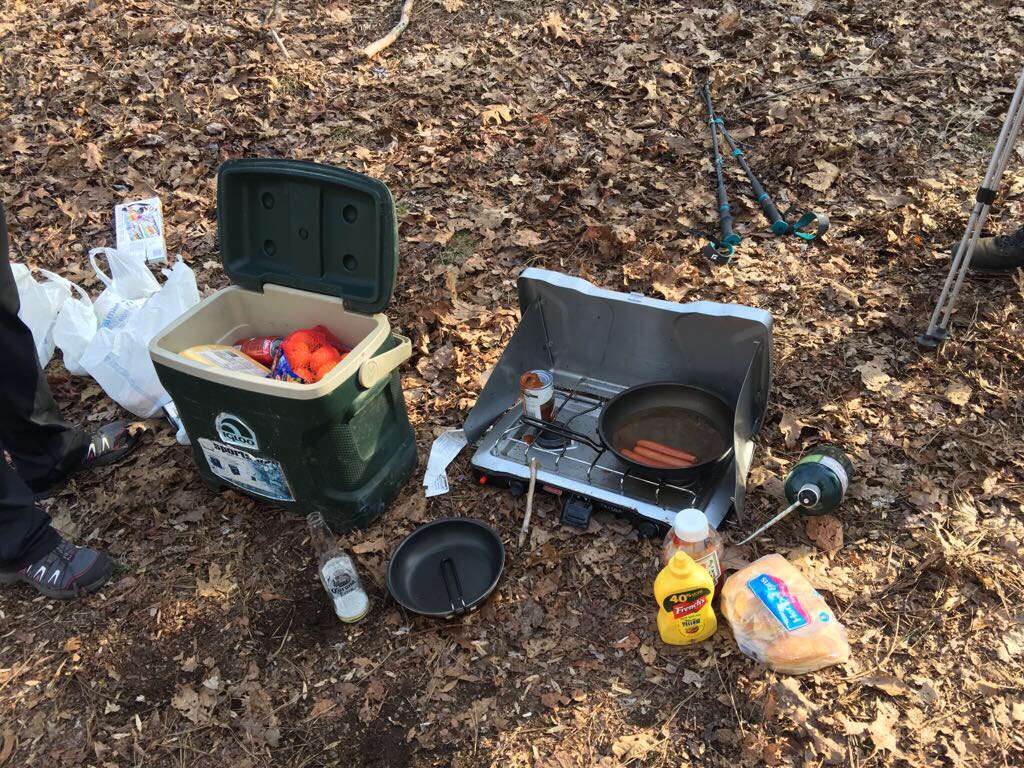 I started the climb and realized I was parched from the chips. My hydration hose that has my Gatorade was empty and I had a little less than 0.5 liters left in the smart water bottle hooked to the sawyer squeeze. By the time I was at the summit, I had finished my water and was still thirsty. When I came across the sign for the shelter, I was overjoyed. It had been a rough day. 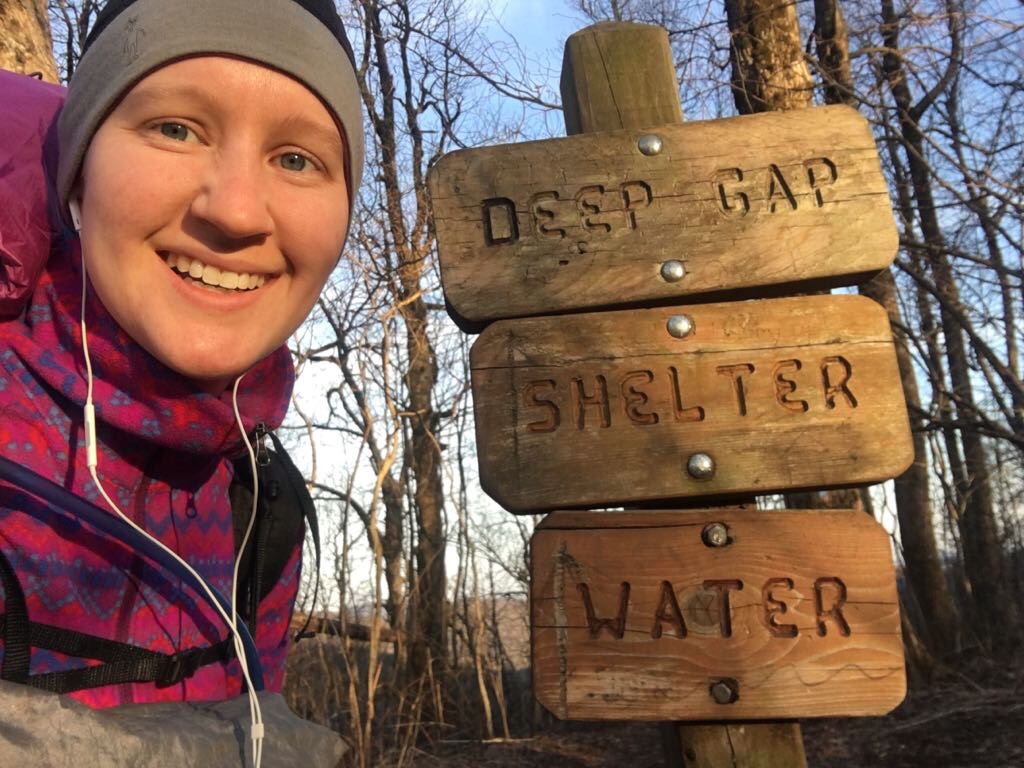 I was jogging the downhill to the shelter, in part because I was hungry, and in part to beat the sunset. I stopped at the spring on the way to fill up, all the while feeling overjoyed at the voices I could hear down the path. I needed human interaction after being in solitude most of the day. 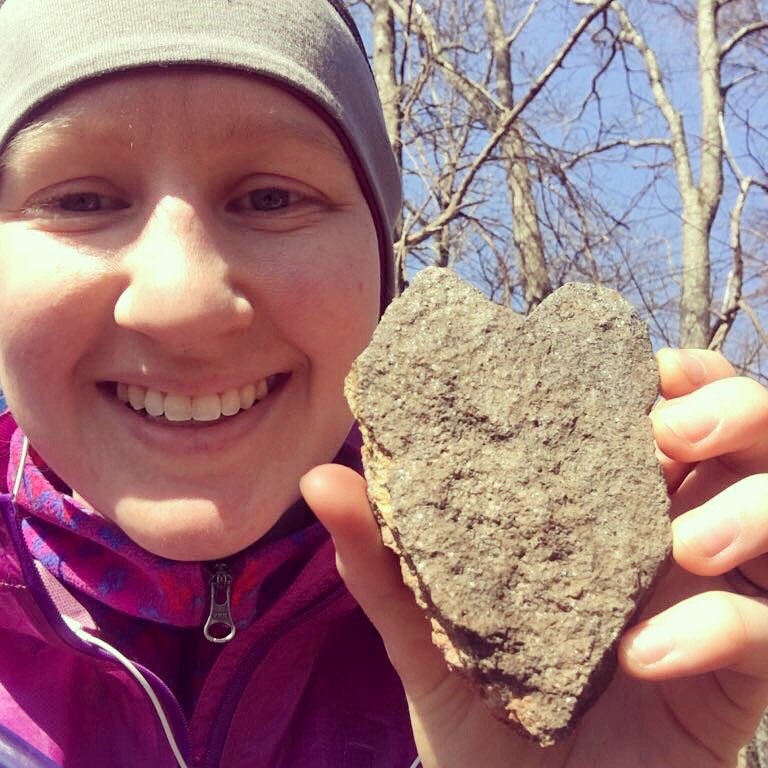 Trying to remind myself to love the trail

Arriving at camp I found Papa Smurf, Crow, Gismel, Homeward Bound, and 2 section hikers. We chatted, made dinner, and talked some more. I made a new daily record today of 15.7 miles! (15.5 plus 0.3 to the shelter). It’s supposed to be cold again tonight but I don’t feel as nervous as yesterday. I think I’m acclimating to the cold.