Some Sunshine in My Life

They tell you to hike your own hike. They warn against getting caught up in a pack of people too soon: You’ll compromise your own goals, they say. You’ll get injured, they say. You’ll miss out on the solitude and silence the AT experience can offer you. You’ll wind up spending more money than you planned to, whether it’s via peer pressure to drink in town or stay in town longer than you otherwise would.

What they don’t say is how desperately lonesome and creepy the woods are on the long afternoons after the morning rush hour has sorted itself out—early starters getting passed by fast-hiking late risers, the crowd thinning, the lunchtime shelter used and abandoned by everyone, one by one.

(Digression: Rhododendron rant. When I first started hiking, in April, I loved them because they and the mountain laurel were the only green to see. I even touted the rhododendron leaf’s advantages for pee-wiping, and let me tell you, compared with the withered brown oak and maples lying on the forest floor since the previous fall, they were winners. And yes, rhododendrons have big juicy blooms, but I must be in the exact wrong place at almost every single moment because I’ve only seen blooms in people’s gardens and in the Grayson Highlands. But my principal gripe about rhododendrons is their density and the frequency with which the trail insists on tunneling right through groves of them. The only bright note in a rhododendron grove is that it’s typically lower on the side of a mountain than not, which increases the likelihood of water-source plenty. But people need light, and rhododendrons grow thick as thieves. Creepy, depression-inducing, angst-provoking, despair-bringing thieves.)

But back to hiking your own hike. It’s definitely important. My first injury happened, I hypothesize, all because I was subconsciously trying to match someone else’s pace. What can I say? The previous night had been lonesome since no one I knew had stayed at the same shelter I did, and someone I did know came along that afternoon and, welp. I wanted needed a friend.

Look. I’m not a frail wallflower who can’t stand her own company. I don’t crowd my calendar to avoid solitude. I don’t fear alone time. I like doing things (writing, reading, thinking) that require there not be other people around. In other words, I’m good with me.

But being alone in the woods, with no cell phone signal, with no certainty of encountering another human at any time, with no knowledge whatsoever of the outside world nor any way to obtain it save walking up to as many as the next 70 miles (depending on where the next town is) … That is a whole other kind of lonesome, my friends.

Of course if you are thru-hiking on the AT in anything approaching proximity to the main bubble, that kind of lonesome will be pretty rare. In 72 days and 675 miles of hiking, I’d venture to guess the longest I’ve gone without any human contact is probably eight hours. I regularly went far, far longer than that in my “civilian” life. What intensifies the lonesomeness, though, what, frankly, intensifies most unpleasant feelings on the trail (hot, cold, wet, weary, homesick, exhausted) are two things: ignorance and powerlessness. You’re ignorant of when the unpleasantness will end, and you’re powerless in the moment to change it. SUCKS!

All of which preamble is to prepare you to deeply understand how much difference it made when I met my hiking buddy, Sunshine!

The first thing you notice about this woman is her spirit. She’s genuinely positive (privately she’ll concede she can be manipulative and two-faced, a la David Sedaris, but let’s leave that alone for the moment—not everyone’s lucky enough to get to know Sunshine on this level). She’s funny in an urbane and young way—we connect deeply despite a 16-year age difference because I’m immature and she’s got an old soul. She’s aggressively friendly, seeing and plugging in to whatever there is to like about anyone. Her radar is tuned to catch the slightest, remotely positive thing about a person. People I feel predisposed to dislike I’ll find her engaged in a genuine conversation with, and suddenly I see that indeed, they are human, too!

She likes herself, a quality that is rarer than you might think, not to be confused with self-absorption or any other brand of narcissism. Trust me, you want this trait in a friend; it frees you from reassurance duty (Sunshine would never ask if her hiking tights make her butt look big). This healthy self-regard manifests in the way she makes herself laugh when telling stories.

One of the ways she (not consciously, I’m certain) endears herself to me is by telling these stories about me. Her favorite theme is “Notebook locates and utilizes her inner bitch to solve problems.” The first time she told one of these stories it was at Partnership Shelter (from which you can order pizza) near Marion, VA. Our pizza had finally arrived, and Bear and I were sharing an extra large supreme; Shade was eating the first of her main courses, and Duracell was innocently eating a sandwich and a banana. I was drinking what little Knob Creek I had left over from Inti’s visit, and so I’m sure this was funnier to both Sunshine and me than to anyone else, but it made for a bright evening.

“So we had just hiked 17.5 miles, over the Grayson Highlands, and we were the only ones in the shelter,” she begins. When she gets to the part where I get out of my sleeping bag to confront the group of section hikers keeping us awake well past hiker midnight, I am smiling, awash in the good vibes of friendship and mutual appreciation. She’s quoting me: “‘Am I going to have to get my tent?’” She’s laughing so hard she almost cannot get the words out. Then she tells the part where I get back into my sleeping bag and the voices dim to murmurs and then die out completely.

Duracell finishes his banana and eyes Sunshine. “You’re funny,” he says. Then he turns to me. “You, too.”

I mean, we certainly entertain and amuse each other. This reminds me of one of the first times Sunshine and I truly connected, the first glimmer I had she might make a good hiking partner, you know, for the distance. We were in Erwin, TN, and had caught Uncle Johnny’s lunch shuttle to Pizza Plus. The rest of the shuttled hikers were next door doing resupply, but I was only on my third plate of salad bar goodness, and Sunshine was keeping me company while I shoveled in canned peaches and cottage cheese.

The table held a menu, which I picked up to peruse, wondering if it might have some dessert I’d like.

After a minute, I held the menu up. “This is an entirely pizza-crust-based menu,” I said. “Pizza. Pizza Stix. Garlic bread. Dessert pizza. Calzones. Dessert calzones. They even have Pepe bread,” I said, and looked up at her. She was smiling. “The fuck is Pepe bread?” I asked.

“Sounds like a Dominican specialty,” she said, mock seriousness, and we dissolved, helpless, united in our lighthearted disdain for Pepe bread. (We never did determine what it was.) I’m sure the situation was funny to absolutely no one else, but we gave over a good five minutes of belly laughs to it, to the absurdity of our being in Erwin, Tennessee, to the absurdity of eating three plates of salad bar, and to the joy of the fact that there existed in life a thing called Pepe bread.

Hiking with Sunshine makes all the difference her name (which I gave her!) suggests. We take our zeroes together, splitting hotel or hostel costs. We plan out legs together, deciding how far each day to go and where to stop for the night. We hike separately during the day but meet up each night, and to say that makes the difference between letting a rhododendron thicket defeat you and not is an understatement as subtle as any I’ve made. 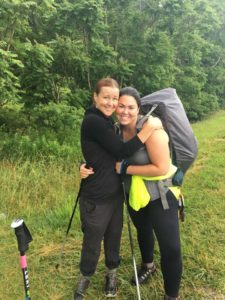 Our last hug … so far. Sunshine saw me through my last agonizing morning on my broken foot, cheering me the whole way and understanding I needed to get off for a while

Of course, when I got off trail to heal my foot, she kept going, and since she is a LASHer (long-ass section hiker) getting off at Harper’s Ferry, it’s unlikely we’ll get to join up again. But they say the trail makes lifelong friendships, and I have no doubt this is one of them. Sunshine, hurry up and get that pad in New York … I’m coming to visit you soon!