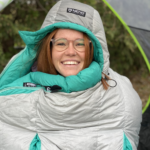 Ever thought about using baby butt cream to prevent chafing? Wondered which fanny pack you should take on your thru-hike? Are “big brands” worth the hype? Well, Sophia has thoughts on all of these things. In her gear video, she gives her unfiltered opinions about the gear she used on the AT, what worked best for her, which gear she sent back home, and what she would 100% use again. Whether you’re a new hiker looking for gear inspiration or a seasoned thru-hiker who shamelessly spends hours watching gear videos on YouTube, this one’s for you.

Check out Sophia’s gear breakdown below:

The ULA Circuit is a sturdy pack that served Sophia well while on trail. Though it isn’t the lightest pack on the market, she had no issues with it. If there was one thing she could change next time around, it would be choosing a funkier colour.

In Sophia’s opinion, she rates this tent a 10/10. The only time the Hornet 2P leaked was when Sophia “literally was in a puddle.” Safe to say you’ll keep dry when using this bad boy on trail.

Cold weather hiking had nothing on Sophia when it came to her quilt set-up. She originally started with a 20 degree quilt, which she kept zipped during the beginning of her hike. She later swapped the 20 degree quilt for a 30 degree quilt when the weather was warmer.

Sophia explains that Therm-A-Rest states that this liner adds 15 degrees, though in her experience, she doesn’t believe that to be true. She continued to use it as a sleeping bag liner throughout the colder sections of the trail. When it got warmer, she filled the liner with her clothes and used it as a pillow. She personally thought it was comfier than her Therm-A-Rest pillow: another item that she chose to send home.

This pump sack isn’t technically conducive with Therm-A-Rest pads, but Sophia cut the valve open a bit bigger to make it work. She highly recommends pump sacks because it saves you from having to blow anything up. During the day, she uses the pump sack as a bag to hold her clothes.

During cold weather hiking, rain pants were Sophia’s best friend. She liked having them as an extra barrier from the rain and the cold. But just like most people, she eventually sent these home.

Sophia originally started the trail with an old Marmot raincoat that she eventually sent home because it had too many holes. She swapped it out for a FROGG TOGGS jacket, which worked well in her opinion. The only downside was that it was “basically tissue paper.” It ripped as well, landing it in the trash bin once she arrived back home.

Who doesn’t love a good puffy? Sophia particularly loved how small her Monbtell puffy packed down. Sophia sent it back home during the warmer months, but says that she will definitely use it again on future hikes.

Sophia used these leggings mostly for sleeping but also busted them out on really cold days.

Sophia carried three pairs of socks, which she understands might be a bit overkill. Nonetheless, she didn’t care because she didn’t like having wet feet. Sophia also started the hike with a pair of waterproof socks, but sent those home as they were heavy and made her feet sweat.

Like many hikers, Sophia started her AT hike wearing Altra Lone Peak 4s. Unfortunately, she received a lot of shin pain that made her ankles swell. As a result, she swapped out the Altras for Brooks Cascadias. She wore them for the rest of her time trail and will wear them again for any other hike.

Sophia rates this fanny pack a 10/10. It had received a lot of love from Sophia over the years, resulting in a broken zipper while on the AT.

After her Cotopaxi fanny pack bit the dust, she swapped it out for a LifeAF fanny. She particularly loved that it was made out of dyneema. She used her fanny pack to hold all sorts of things like her phone, headphones, snacks, chapstick, and lighter.

Yeahhhh, this is technically meant for babies… but it worked great for Sophia (iykyk).

*  Sophia was a 2020 Thru-Hike Syndicate Ambassador: a program that supports North American thru-hikers by fully outfitting them during their time on trail. Some of the gear Sophia used on the AT was received through this sponsorship program.

World traveller. Thru-hiker. Aspiring writer & journalist. I thru-hiked the Bruce Trail in Ontario, Canada with my dad in the fall of 2020 after my PCT dreams had been crushed by the pandemic. Since then, we've been chasing trails and encouraging others to get outside.