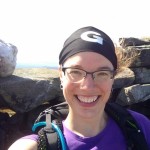 In Egyptian mythology, the god Ptah is the god of craftsmen, artists, and architects. It is said that he created all things in the world by thinking of them in his heart and speaking them aloud.

I tried to do this with thru-hiking the AT several times over the course of my life. Once, years ago, I said to my then-partner that it was something I wanted to do. At the time, we lived a tidy, white-picket-fence kind of life, and her patience with my lack of career stability always wore thin. Thru-hiking was one of those things that I could only conceivably talk about doing when I retired.

Years later, in a third-floor apartment in Pittsburgh, fresh off of leaving her, I said it to my mother, recently diagnosed with lung cancer. It felt sooner, more possible. But first: student loans. I was working a corporate job I didn’t much like but that paid well. Mom was full of concerns and worry but also immediately offered to do care packages and take in my cats and plants while I was gone. I promised myself—and her—that I would work the job until I could pay off my debts and save, and then I would hike the trail.

I imagined a year, perhaps two.

I mentioned it to a couple friends and the feedback I got was full of doubt and worry, of all the things that could go wrong.

Then the job deteriorated and even the promise of a thru-hike was not enough to make it bearable. So I looked for a new job, and ended up in DC working for a small software company. I got out for weekend day-hikes of the AT in Maryland and Pennsylvania. 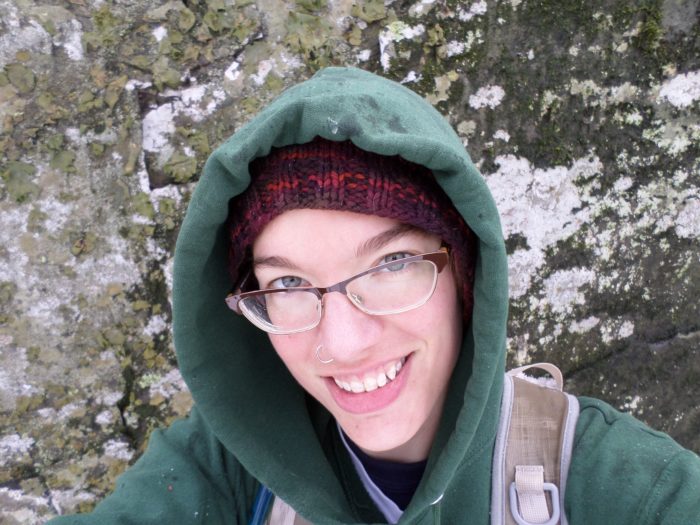 The first time I ever set foot on the AT, Thanksgiving, 2014

And I tried to pretend that this was enough. I paid my student loan debt off by spending as little money as possible. I bought only three pairs of new dress pants and otherwise only paid for food, rent, and utilities. Six months at that job and I was debt-free. But it was a decent job, with people I enjoyed. I didn’t feel like I should walk away from a good thing. It felt like spitting in fate’s eye.

We had a company retreat that summer in Virginia. One of my coworkers and I drove down and back together in my car. On the way back, near Skyline Drive, we saw a scrubby thru-hiker looking for a hitch. I said: “How do you feel about picking up hitchhikers?” And she considered it for a moment and said: “Let’s do it.”

So we picked him up and gave him a ride to a trail-crossing. He regaled us with tales of his life before the trail, most of which were absurd enough that we both concluded he was a pathological liar. But we listened as if we believed them. And after we dropped him off, I confided in her that the trail had been my plan, before I took this job. At the time, we were hoping our little company would be bought by a larger software company, and so I told her I’d put off the plan until we were sold.

And then I tried to put the idea away.

I stopped talking about it.

I planned a move to Maine, where I hoped to hike a lot more.

I took the call from my mom’s doctor that her cancer had metastasized while I was on a stretch of the AT in Maryland. How I had enough service for that call to come through, I have no idea.

But I knew she was dying. I went home to Illinois to be with her rather than finishing the remaining stretch of trail. 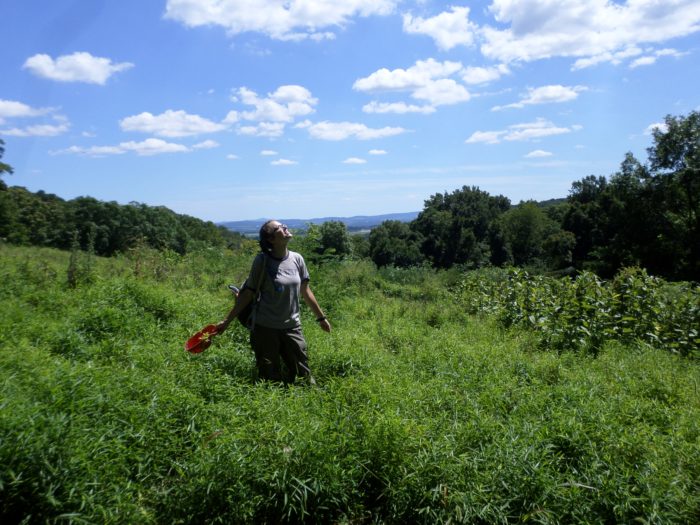 On a stretch of MD AT the day I learned my mom’s cancer had metastasized, August 2015

My mom lost her battle with lung cancer as I was moving to Maine. I hiked almost every weekend because I didn’t know what else to do, mostly small mountains in southern and western Maine and eastern New Hampshire. I walked the beach near my off-season beach rental every day. I felt an increasing sense of urgency, of wanting to do the things that mattered. 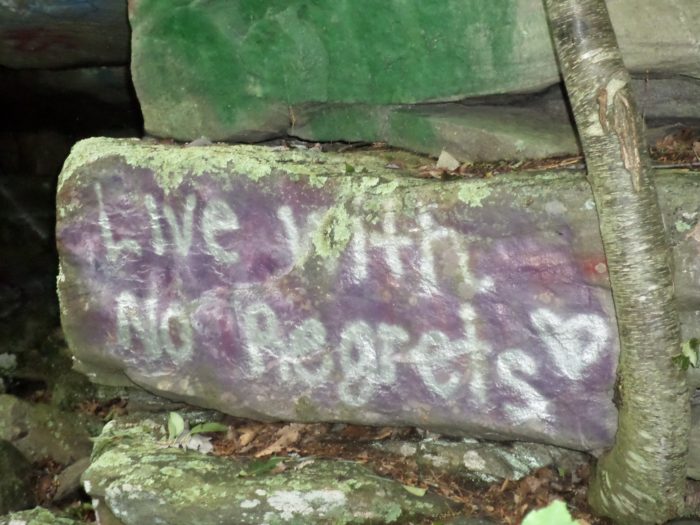 That spring, I briefly considered quitting to do my thru-hike. We were backing away from the idea of the company being sold, and with this new sense of mortality and urgency, I wanted to do something that felt important.

But I had two weddings to officiate and I hadn’t really planned or prepared for a thru-hike, and I knew, somehow, that if I attempted it, I would fail. And also, what would I do with my cats, my plants? Who would send packages? The loss of my mother from this plan was a gaping hole.

So I worked remotely from Europe for three months, instead, which was something else I’d wanted to do, and my job allowed me this perk. I found people to take my cats, my plants. I hiked in Provence and Iceland, took rambling walks around Paris, Marseille, Vienna, and Stockholm. And I tried, again, to pretend that this was enough. 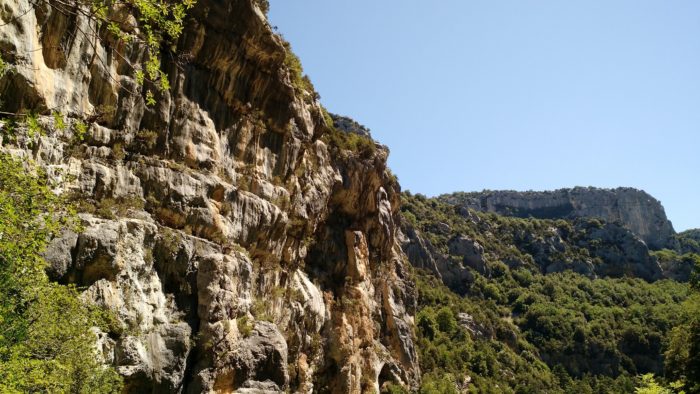 I got back to Maine and fell into an intense relationship and all thoughts of the trail disappeared until the relationship ended—ugly, somewhat bitterly—in November. And I went back to hiking almost every weekend, often both days. 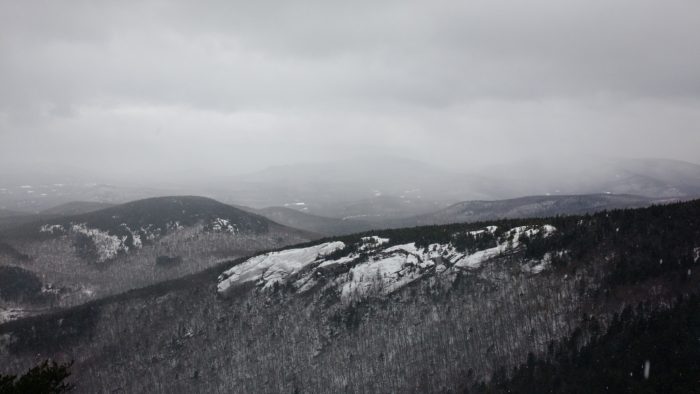 And that is when the trail really started calling me. Last winter, into the spring. I started mentioning it idly to a couple friends and for the first time, it didn’t seem crazy. Most of them seemed to say: “Hey, that seems doable. And like something you’d do.” I asked our company founder if it was something I had to quit for or take a leave of absence to do, and he said I shouldn’t even think about that if it mattered to me, to just do it, and we’d sort it out.

And I sat on that, for a couple months. I considered what it would mean, logistically. The trade-offs. The sacrifices. What I’d be walking away from.

Over the course of last summer, I began to speak it aloud for real.

First, haltingly, to a few friends, all of whom were wildly encouraging this time.

I felt I could do it, but I worried about putting everything into storage and having nowhere to end up. And so I messaged an internet friend—someone I’d met through a women’s hiking group but had never met in person, but recognized as a kindred spirit, who lives here in Maine—and apropos of nothing, I asked her if I could set up my tent in her yard after I finished the trail, until I got back on my feet.

And she said I could stay in her spare bedroom as long as I wanted. And would I perform a ceremony for her and her husband to renew their vows?

I messaged a grad school friend who lives in Atlanta, asking if she’d be around to help get me to the trailhead. She replied almost instantly, offering a send-off with style.

And suddenly, I found myself calling my dad to tell him.

To speak this thing into existence for real.

My father, the ever-practical pragmatist. I laid it out for him, and I waited for him to tell me it was a terrible my idea. I knew all of the arguments he could make against doing it, because I’d made them for years. So I said: “I want to do this. I know, in my mid-thirties with a good job, it’s not a very responsible adult thing to do. But it feels like what I am supposed to do.”

And then I waited for him to agree that it was irresponsible, to tell me not to do it. But instead, he surprised me:

I’m proud of you for wanting to do this. Because it’s hard. And hard things…hard things don’t just happen in life. You have to work to make them happen. And you are working to make this happen. Let me know what I can do to help.

And suddenly, I realized that I had spoken this thing into existence. I had thought about it so long, kept it in my heart for so long, that speaking it seemed enough. And as I told more people, most of them just said: “Of course that’s what you’ll do next.” Because I have, apparently, become the kind of person for whom this seems obvious as a next step in life.

Thus began months of planning and research, of explaining to my coworkers what I wanted to do (and, more recently, of encouraging them to hire someone else and not to treat it as a true leave-of-absence, which I’ll talk about in another post), of asking for friends and family to volunteer to send packages to me on the trail because the idea of not having anyone send them made me indescribably sad, of asking friends if I could sleep in my hammock in their yard, of shakedown hikes and gear tests.

I can’t speak to the difficulty of the thru-hike itself, but I can say that my dad was right. The opportunity to do it is not something that just gets handed to you. You do have to work to make it happen. In my case, it took a lot of stuttering attempts to be able to speak it into existence. But I am absolutely certain that now is the right time, for me. This is the thing I am supposed to do next.

I felt it with every step of my AT shakedowns in August through the Mahoosucs and the Bigelows (which were so hard and taught me how important stripping weight from my pack was), and of every second I stared at Mt. Katahdin while I rucked the Millinocket Half-Marathon in December carrying most of my thru-hike kit. 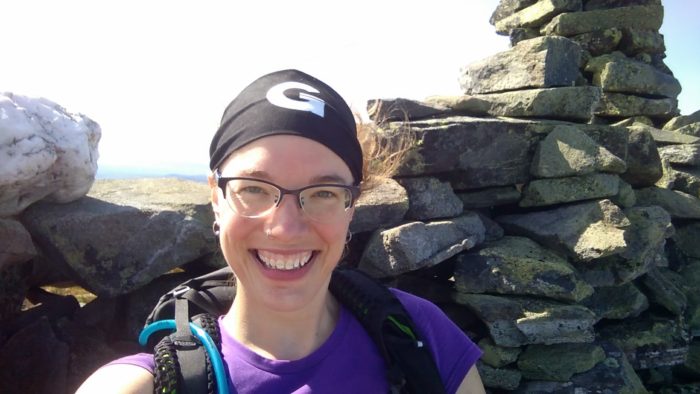 With just over two months to go, it seems like the start is rushing toward me almost too quickly, despite my impatience to begin.

I know there are a lot of would-be thru-hikers in a similar place, still tentatively trying to speak this aloud. Some of you have dates far in the future picked out (e.g. 2020, 2024). Some of you are still in the “some day” stage. And all I would say is that if you believe in it enough, you will.

But remember that it is not an opportunity that just magically appears; you work for it.

You save for it.

You sacrifice for it.

And above all, you must have the courage to speak it aloud to everyone—both those who will support you and those who will doubt you or outright discourage you.

It’s an act of willful creation. It can feel overwhelming and impossible. And that’s half the beauty.