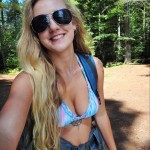 You’ve done it! After a few weeks of mulling it over and reading some books, it’s decided. You’re going to hike the Appalachian Trail. Approximately 2,181 miles of walking- in the cold, through the green tunnel, over mountains, and through fields and river crossings. If you’re anything like me, there was one moment that the decision was made final.

I have been dreaming of the AT since I was sixteen, about seven years. There had never been the right time for me, after my high school graduation I decided to go straight to college to get my nursing degree. After graduating and passing my NCLEX I immediately started at a home health agency, a job that I absolutely LOVE. Along with my new job I began classes to get my BSN, which I will finish this coming March- just in time for the trail. So for me the decision was simple. When will I ever have another chance like this? The thought of going one more year without embarking on this journey made my chest feel tight.

I have always known I’m not the 40 hour Monday through Friday work week type of person. Ever since I was introduced to the wild world of traveling I’ve known that predictable, scheduled lifestyle is not for me. Most of my college days I felt suffocated, performing the same routine day in and day out left me in tears most of the time, always feeling like I was supposed to be somewhere else, doing something, anything more interesting.

March 10th marks the end of my classes and then will be heading south to Georgia. These past couple months, and the months coming up, have been filled with so many plans and preparations. I’ve read so many books I feel like I’m an expert, although I know I’m far from it. Hours have been spent obsessively comparing sleeping bags. It got to the point where I was making charts comparing weight vs material vs temperature rating- probably looking like a mad scientist, bent over my lists and whispering to myself.

The trail might be the most exciting decision you’ve ever made. If you’re like me, it makes your heart race just thinking about it. Other people… not so much. Be prepared for eye squinting, mouth pursing- hell, sometimes the occasional straight up laugh! There are the people who have no clue what it even is, they think you’re talking about a weekend backpacking trip and that you’ll be back in time for work on Monday. The laughers are usually also the doubters. The idea of you being away from civilization and normality for five months is ridiculous to them. But on the flip side, you’ll also have the best kind of people- the people that get excited for you and encourage you. My grandma is one of these, once I told her the news she was of course nervous, but also shares articles and websites she finds about the trail, which to me is one of the best forms of support I can get. Another example is my mom. She has always known how bad I’ve wanted to do the trail and is the first person I want to tell when I decide on a new piece of gear. Not to mention she bought me the down jacket I’ve been eyeing up for weeks (thanks Mom!).

People aren’t going to understand some things like “Why aren’t you taking a gun?” and “Why aren’t you afraid?”. You might have the people who will argue, regardless of the hours… actually days of research you’ve put into something. “You’re stupid for taking a hammock, a tent would be a much smarter choice”. “You’re going to be miserable with wool socks, they’re so itchy”. What I’ve learned to do is smile and nod. You know your stuff (sort of) and the best way to find out things that aren’t going to work for you, is to get on the trail and try it.

You CAN and you WILL

I would strongly advise you to sit down and put in writing, WHY are you doing this trail. If you’re easily swayed by your friends and families words, it could be easy to listen to their doubts and begin to second guess yourself. Your decision could start to feel ridiculous and far- fetched. IGNORE. You got this girl (or guy) and the biggest supporter you’ll have in this crazy journey is yourself.

Hi everyone, Cassie here! I'm a 21 year old girl from central PA who was born to travel. Every place I've been to is stuck in my heart forever- from the giant Redwoods of California to the mountains of the Adirondacks and the rocks of Utah. I'll be skipping out on my graduation for my BSN and setting out on my thru hike of the Appalachian Trail March of 2018. Follow my journey!