After being off the trail for two weeks to take care of Mel/Backfire’s kidney stone, we started up again where we had left off in Erwin all those many days ago. I had thought with all our time off we’d be like the Eveready Bunnies hopping down the trail. At least, I thought, it might be true for me. Mel, on the other hand, had just recovered from surgery to have a kidney stone removed and had a good excuse for not feeling peppy. But we BOTH felt slow and tired. The whole day was a huge effort–like we were starting all over again–like we were swimming upstream in a river of molasses. We were that slow. 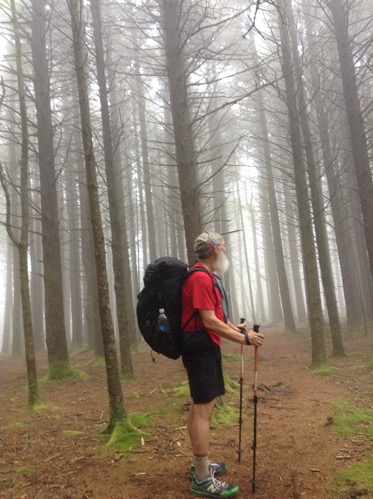 The foggy morning on Unaka Mountain

Our hike started at 9:30 and by 5:00 we were really hoping to find a campsite so we could collapse! There were plenty of campsites available near a place called Beauty Spot, but our shuttle driver had cautioned us not to set up camp near the parking lot or the roads near Beauty Spot. A few hikers had recently been robbed at gunpoint and another couple had their backpacks stolen. We were totally dead tired and wanted to stop, but the only available spots were within earshot of the parking lot or the road, so we kept walking…and walking, and walking. I was so totally tired I just wanted to drop–anywhere! 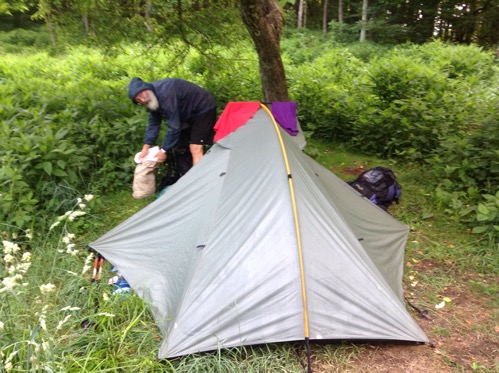 Finally we found a tiny little flat spot that would accommodate our tent, but there was still a road nearby. We didn’t think our tent could be seen from the road, so we proceeded to put it up and hoped for the best. Pretty soon we heard the sound of a car going by–very, very slowly down the nearby gravel road. Our hearts stopped and we ducked down behind the bushes. Why were they going so agonizingly slow?? Did they see us? Did they have evil intentions? It was a bit unsettling and my brain went into overdrive thinking of the possibilities. We finished up our ‘chores’ quickly and went to bed. Late in the night, another car went by very slowly and woke me up. First, I heard the crunching of tires on the gravel and then I saw the headlights shining in the trees. I was spooked. Mel, on the other hand, was fast asleep. A few hours later, another car went by, and then another. Needless to say, I didn’t sleep very well but Mel snored on, oblivious to the drama just outside our tent! Guess he wasn’t too worried about any potential robbing or pillaging! 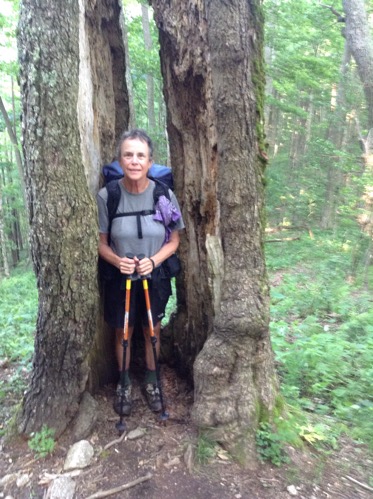 A ‘see through’ tree that was still living!

Day two of our return to the wild found us feeling spunkier and we both had more energy than the first day. It was a short 8 mile day, but as soon as we got into camp at 4:30, we set up our tent and promptly took a nap!
Day three was even better in terms of our energy level. We did 11 miles without feeling exhausted. Yay! It probably helped that it was a relatively easy and pleasant day again–at least until the last hour when it started to rain. It got so uncomfortable wearing our raincoats that it almost seemed better not to wear them–you sweat so much on the inside while being drenched on the outside that you’re wet either way! The only real benefit of a rain jacket is that you stay a little warmer and, if the air turns cold, you’re less likely to suffer from hypothermia –there’s always tradeoffs! 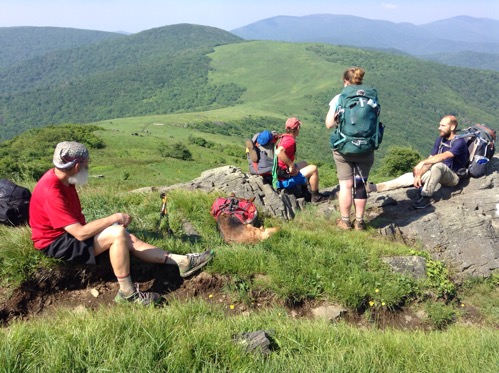 By the time we got to our campsite, the rain had abated and we were eager to get our tent set up before the skies let loose again. It rained torrents all night long and the wind blew so hard I couldn’t go back to sleep for fear of a tree falling on our tent –like the one that killed a hiker on the trail about a month ago! Mel, bless his heart, slept through the whole darned thing!

In the morning, we had to put on our cold, wet, slimy clothes –that was the worst feeling ever! 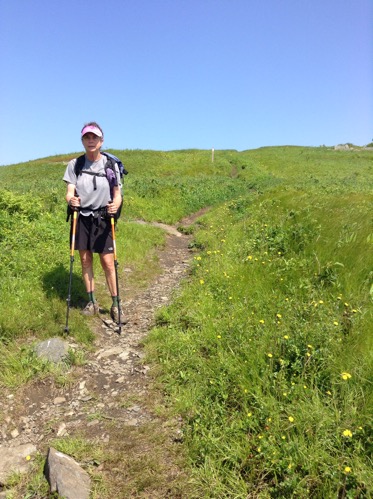 The day started out foggy, damp and windy and all the wetness from the trees was raining down on us in gusts. Once again, we were wet inside and out! 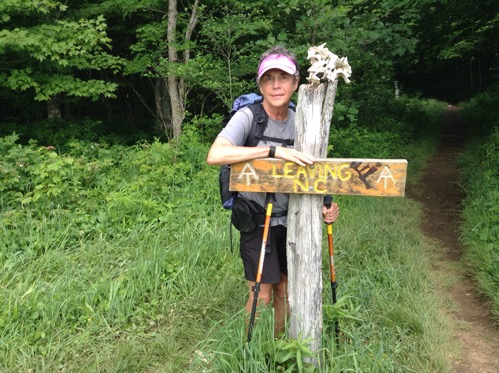 Fortunately, the day eventually cleared and we had beautiful weather for our walk over the picturesque Roan Highlands. At the end of the day, we arrived at Overmountain Shelter (a charming old barn) with energy to spare! 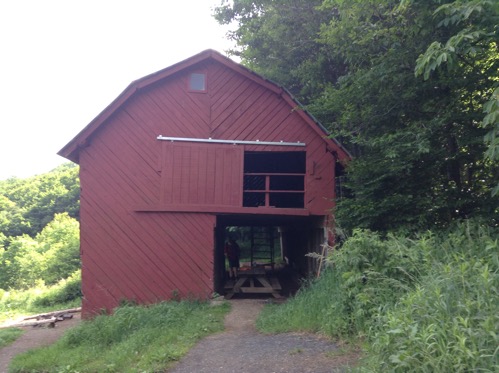 Unfortunately, we were awakened in the middle of the night by the sound of a search and rescue helicopter passing closely overhead with it’s bright lights scanning the area. (I thought it was a plane about to crash and promptly fell back to sleep!!) In the morning, I found out that a forest ranger had arrived at the shelter at the same time as the helicopter to question some of the hikers about a missing runner on the trail. A few of the hikers staying in the barn reported seeing the missing woman at various points along the trail, but their stories varied quite a bit. As best as I could determine from their conversation in the morning, the runner was an ‘older woman’ –someone between 45 and 70! Geesh! We never saw her.
When we set out in the morning, the helicopter was again scanning the area. It was very unsettling and we both hoped that the woman was eventually found and that she was alright–but something just doesn’t add up. 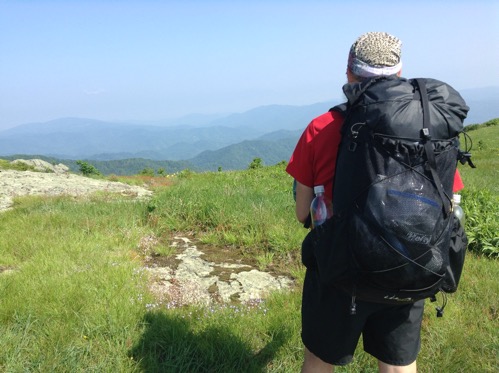 Another spectacular view of the mountains!

The missing woman was a disconcerting start to an otherwise absolutely gorgeous hike over Little Hump Mountain and equally beautiful, but also poorly named, Hump Mountain. 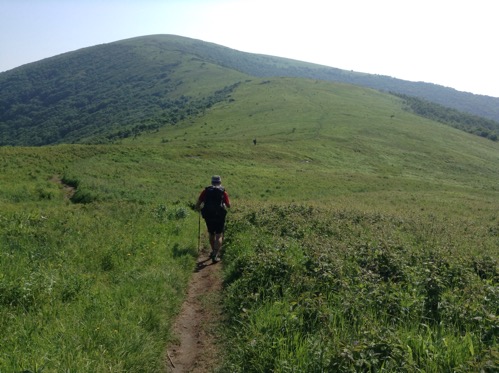 We ended our five days in the wild by staying at a hostel in Elk Park, NC where we enjoyed a refreshing shower, laundry facilities and a shuttle into Roan Mountain by Bob’s Dairyland where we pigged out on French fries, cole slaw and giant BBQ sandwiches–followed later by a shared milkshake! (The irony in all this shared gluttony and shared exertion of hiking is that Mel has lost 16 pounds and I have lost three! How is that even possible??) 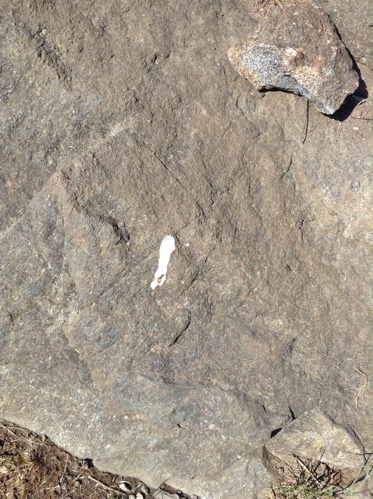 a teeny tiny white blaze left by a bird!–they’re everywhere!

We will be back on the trail tomorrow headed to our next hostel near Hampton, TN–just a few days walkin’! (Mile 427.1)