Still in Virginia, but the Miles Are Adding Up

It feels like I have been hiking in Virginia forever! Oh wait, I have.

My last blog left off after the first week. Well, the next three weeks have been very similar. Get up, eat, walk, eat, walk, eat again, walk again, eat again and again, and then walk. I have walked in 80 degree weather, and walked in near-freezing temps the next day. At least it does not get boring. I know of some hikers who have sent their winter clothes home. I will not until mid-May. Better safe than sorry. 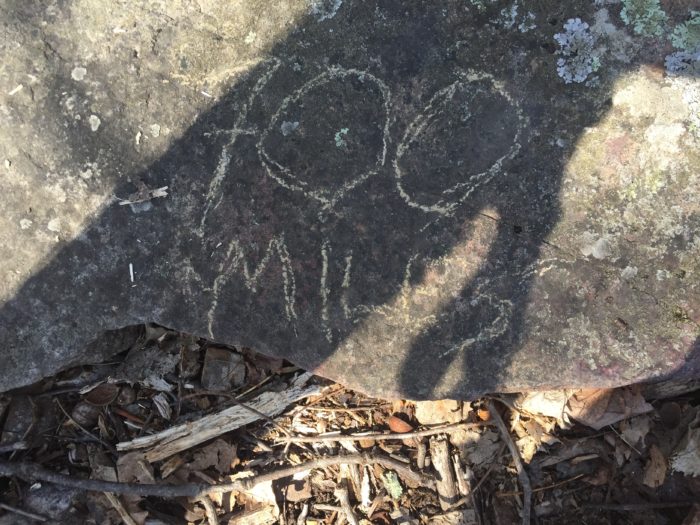 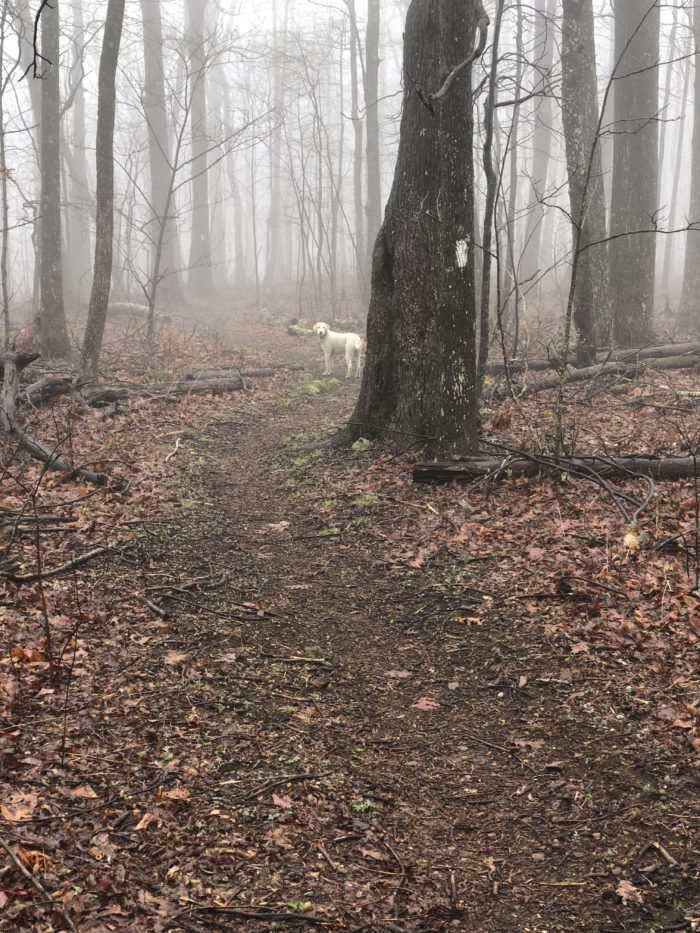 During this month, I hiked over Dragon’s Tooth. I was really worried, especially for Yankee, because I heard it was a pretty steep descent. Fancy Free and JZ (two section hikers I met) were very sweet, offered to hike that section with me, and help me out with Yankee if I needed. Well, Yankee did not need my help. He figured out with a bit of coaching which way was better. It took me over one hour to go down 0.7 miles but it was fun. I butt-scooted a lot but who cares, I made it down. It was exhausting though. Guess it was a taste of the Whites! 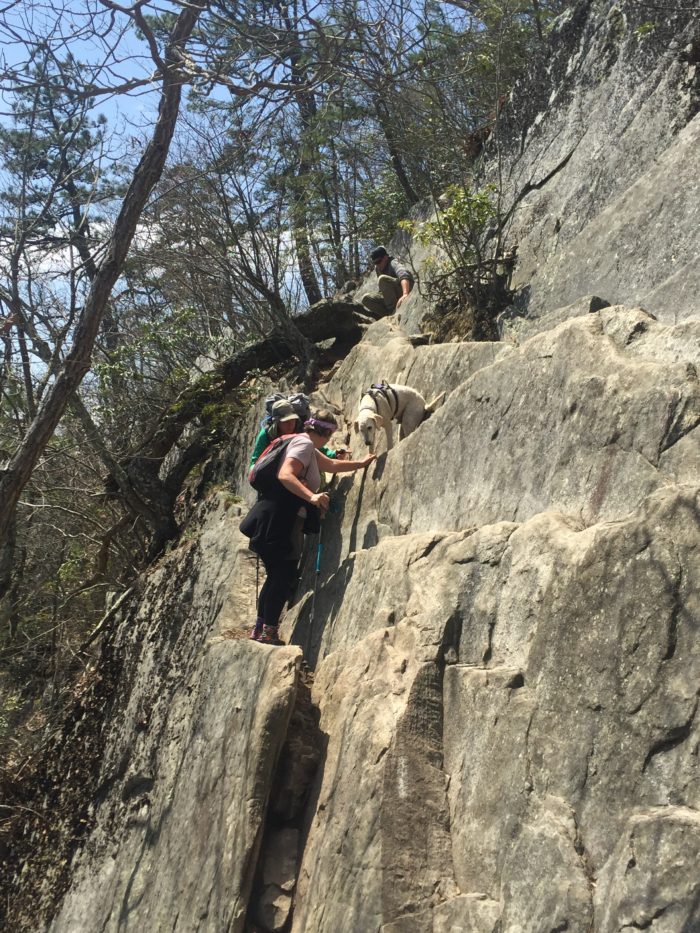 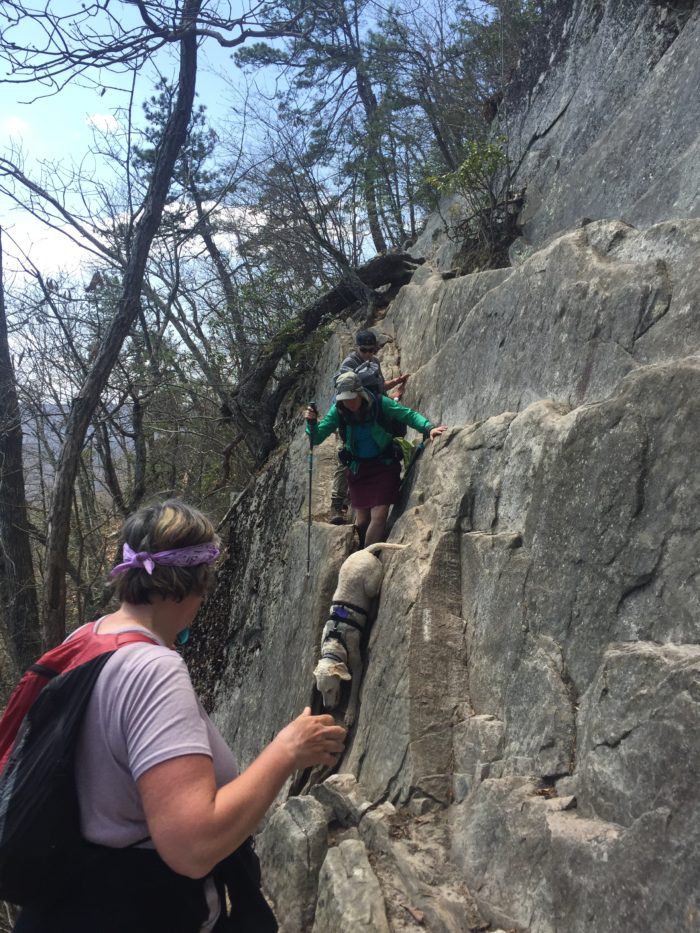 Since I was still slack packing, coming into Daleville I had the choice of hiking 20 miles in a day or hiking ten miles on the AT, then over 3.5 miles to get picked up, and then the next day go back up the 3.5 miles and hike another ten miles on the AT. I don’t know why, but most of us hikers hate walking non-AT miles. It does not make sense since in the scheme of things, a few extra miles here and there does not add that much to the 2,000 miles we are doing but we still try to avoid them. So I decided to walk the 20 miles. A couple of people told me it was not too bad. Looking at the maps, I had to get up McAfee Knob (the most photographed place of the AT), down and then up Tinker Cliffs. That was the first ten miles. The next ten miles looked relatively flat (on the AT, nothing is flat), and the elevation changes did not look too bad. I started out at 6:30 a.m. Made it to McAfee Knob a bit before 9 a.m., waited around to see if anybody else would show up so they could take my picture (Yankee sucks at taking my picture). As I was giving up, a couple showed up so I was able to get the obligatory picture.

Stopped and had lunch at Tinker Cliffs, then started on the last ten miles. Caution: Don’t always believe the maps. The elevation was not bad but the maps do not show all the different size rocks and boulders somebody decided to have the AT go through. It was basically a lot of scrambling up and down boulders, trying to figure out how to get down without falling flat on your face. I don’t think it would have been that bad but I was already tired from my first ten miles so it was probably more difficult that day. It was also hot and no water so even Yankee was dragging by midafternoon. I made it to the hotel by 8 p.m., grumpy, sore, thirsty but proud I was able to do it. I’m not sure I will ever do another 20 miles (maybe if it is flat).

I later heard that a hiker had to be rescued from that area just after I had passed. He fell, suffered a concussion, and broke his arm. Them rocks are no joke. 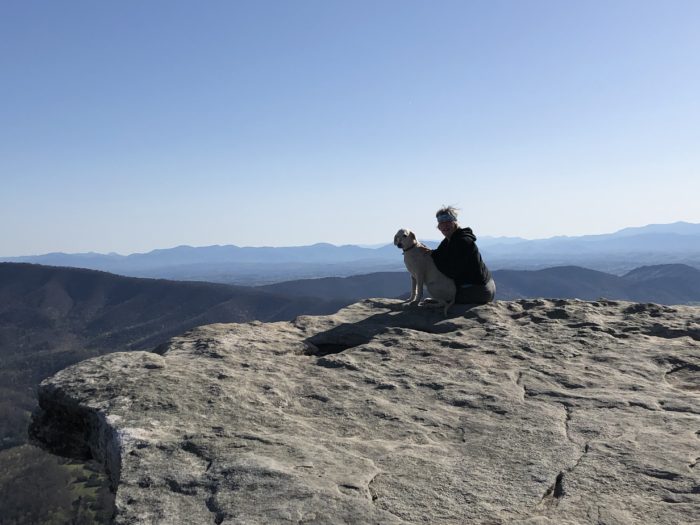 The miles after Daleville were not too bad. It was beautiful ridge walking as well as views since the AT was now in the Blue Ridge Mountains. The trail crossed the Blue Ridge Parkway multiple times and the outlooks were really nice. I had taken a zero (day off) after my 20-mile day, then hiked for two days and decided to take another zero day due to the forecast of heavy rain. Because of that, I had to hike for the next nine days to reach Waynesboro, where I would meet up with the Snail Brethren (mother and son I met last year). They had had to get off the trail in Vermont last year due to the son having a stress fracture of the foot. She had knee surgery at the beginning of February but was given the OK to hike at the beginning of May.

Because there was a lot of rain, there were a few creeks that were pretty high and flowing swiftly. Occasionally the water was up to just below my knees. I heard one girl was swept down for over 70 feet. Them rocks are slippery.

I was doing OK until I hit Three Ridges. I had heard about the descent from The Priest, which is coming down 4,000 feet in four miles. A lot of people found it tough. I did not find it exceptionally difficult. Nobody warned me about the next part of the trail, Three Ridges! What comes down must go up again. I decided to hike it southbound even though it is tougher on my knees but I seem to go a bit faster. I was doing a 15-mile day. The first part did not seem bad, but again, don’t believe everything you see on the map. There was not a lot of elevation but a lot of rocks, which were big enough to slow you down. I did meet a gentleman who was scouting the area. He was planning on proposing to his girlfriend the next week. I did get some trail magic, a bottle of Coke. Then came the Three Ridges. It comes down 4,000 feet over six miles, which is not bad, not as bad as The Priest, but there were several blowdowns (trees blocking the trail where you either have to climb over, under, or around). Some of them were right before switchbacks so you had to go straight down a very steep trail of dirt with nothing to hold onto. Then there were multiple areas of big boulders, different sizes, going every which way, loose so you had to calculate every step. That went on for three miles. I finally made it down to where I was being picked up, over one hour late. The man who was shuttling me was very patient and waited for me. By then it was nearly dark. The shuttle driver was a man in his 80s, had cataracts, and I don’t think he was supposed to drive at night. But we made it safe and sound.

I made it to Waynesboro the next day after a blistering  15-mile hike. 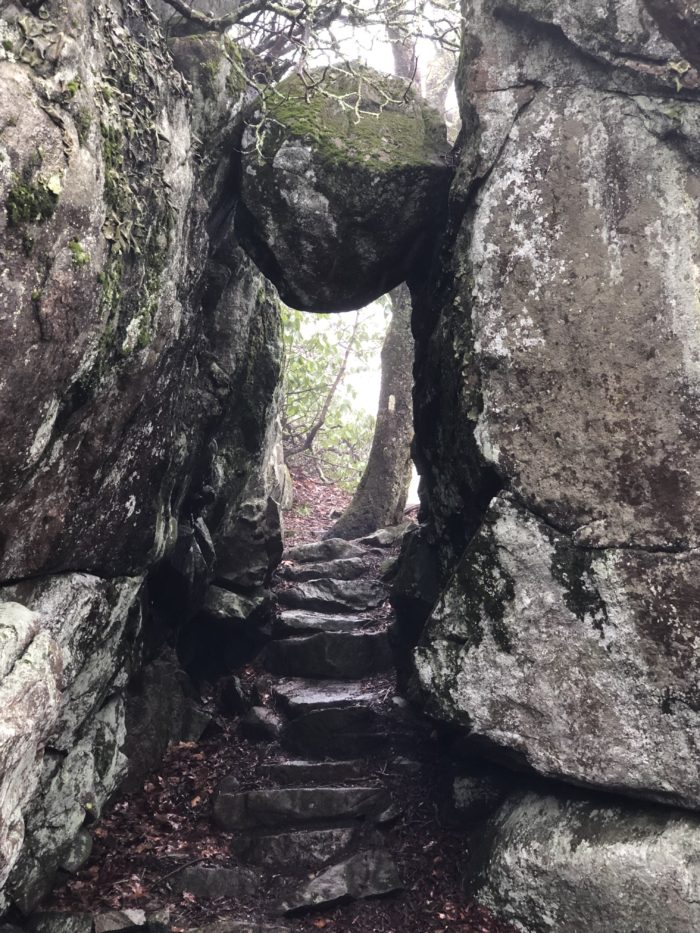 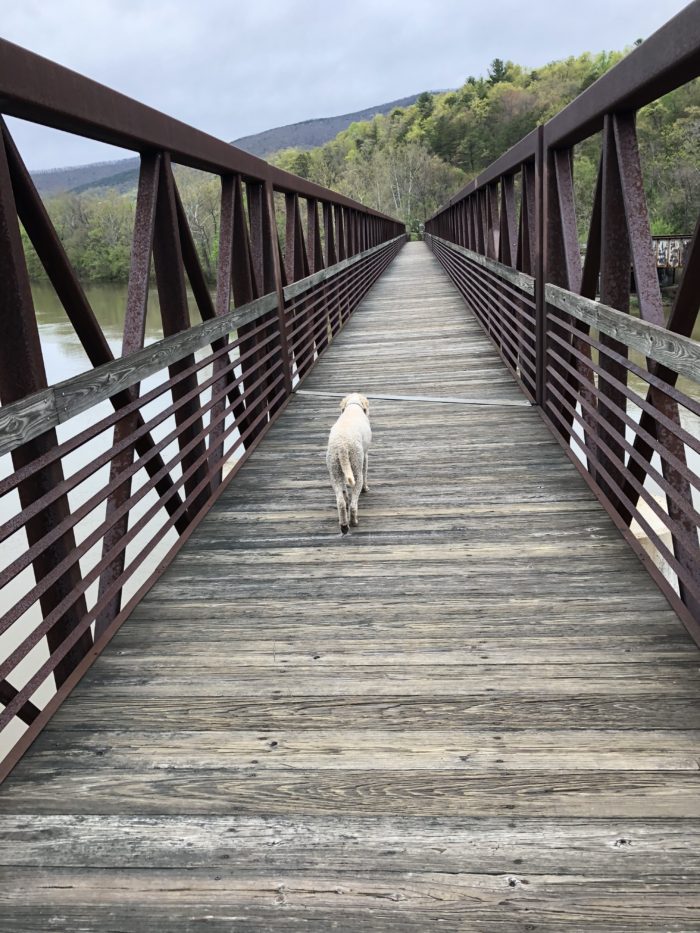 Footbridge over James River built just for us.

That pretty much sums up my first month. No bears seen, lots of deer, squirrels, and birds. Flowers are just coming in. 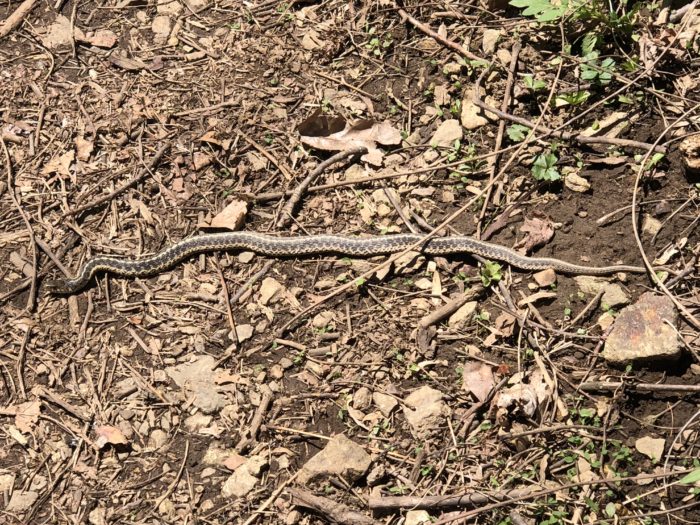 Don’t know what kind of snake but Yankee stepped right over it.

Stay tuned for the Shenandoahs.