Margaritaville’s alarm woke us up at 4:00. We were the first ones up at the campsite and thats what we wanted. Our goal was to get to to the summit of Mt. Katahdin before everyone to have it to ourselves. Tents were packed up quickly, and we ate a hardy breakfast with our red lights on in order to not wake everyone else at the camp up. We gobbled down bars and random foods that we had left in our food bags knowing that this would only lessen our pack weights as we climb up to Katahdin.

As we finished breakfast and prepared to depart camp, the other members of the campsite had awoken and were kind enough to shout a “Good luck” to us as we left. We walked down the gravel road back to the trail and dropped off our sleeping bags, pads, and tents near the ranger station. We wouldn’t need these during the climb, and we would have to come back here when we return anyways so it was just excess weight. We wanted to be up and down the mountain quickly because the ranger the night before told us that a storm was possibly in the afternoon. We were summiting today, and we wanted to stay somewhat dry. Go ahead and call us fair weather hikers.

We officially started the ascent up to the summit at 4:52AM. We signed the log book and were surprised to see that a big group had signed it 30 minutes before us. I guess we weren’t the only ones who wanted the summit to ourselves. We were taking the Hunt trail up in order to stay on the white blaze. At some point on this trip, I considered going up the Knife’s Edge if I made it to the end. But after talking to Margaritaville, who did not want to go up at all, I made my mind that I would stay with her. We were finishing together.

We were expecting this climb to the top to be brutal. Southbound hikers who we crossed paths with had told us that it took them four to five hours to climb up. Granted, those people did not have the trail legs of 2100 miles underneath them, but we still did not doubt the savageness of this climb. But we were fresh from a good nights sleep, well fed, and anxious to finish. We caught up to the group of hikers who had started with each other within 30 minutes and found out that they were a boy scout group. They let us pass, and we zoomed to the above tree line section of this climb. The trees disappeared and rocks and rebar made itself present. The hiking was about to change. And for the first time all trail, I actually stashed by trekking poles to my backpack and maneuvered this part with only my hands.

It was incredibly foggy up there. Visibility was pretty low as we appeared to be hiking right in the middle of a cloud that had submerged the ridge line of this mountain. And a strong wind from the East chilled us to the point that we put on an insulating layer. It wasn’t raining, but the air was full of moisture. My hair had a cold, wet feel to it because of this. The threat of a rain still lingered in our minds as we hiked. Weather is always variable of tree line, and the warning signs all were present that some level precipitation would occur. When? We did not know. All we knew was to keep hiking—at a quicker pace I should add.

I loved this monkey bar section a lot. Margaritaville usually took the lead because she was naturally a faster hiker than me, but this was more hands than feet, and I was zipping through this at ease which allowed me to move to the front on this. At some point, the jungle gym section ended, and we were seemingly transported to a very different trail. It was now just flat rocks that resembled more of a trail than what we just went through. We were now about one mile away from the summit. In this last stretch, we hiked side by side. No one hiked in front of the other. This wasn’t something we planned, it just felt natural. We walked along this rock path, unable to see much in front of us due to the thick fog that flanked us on all sides. 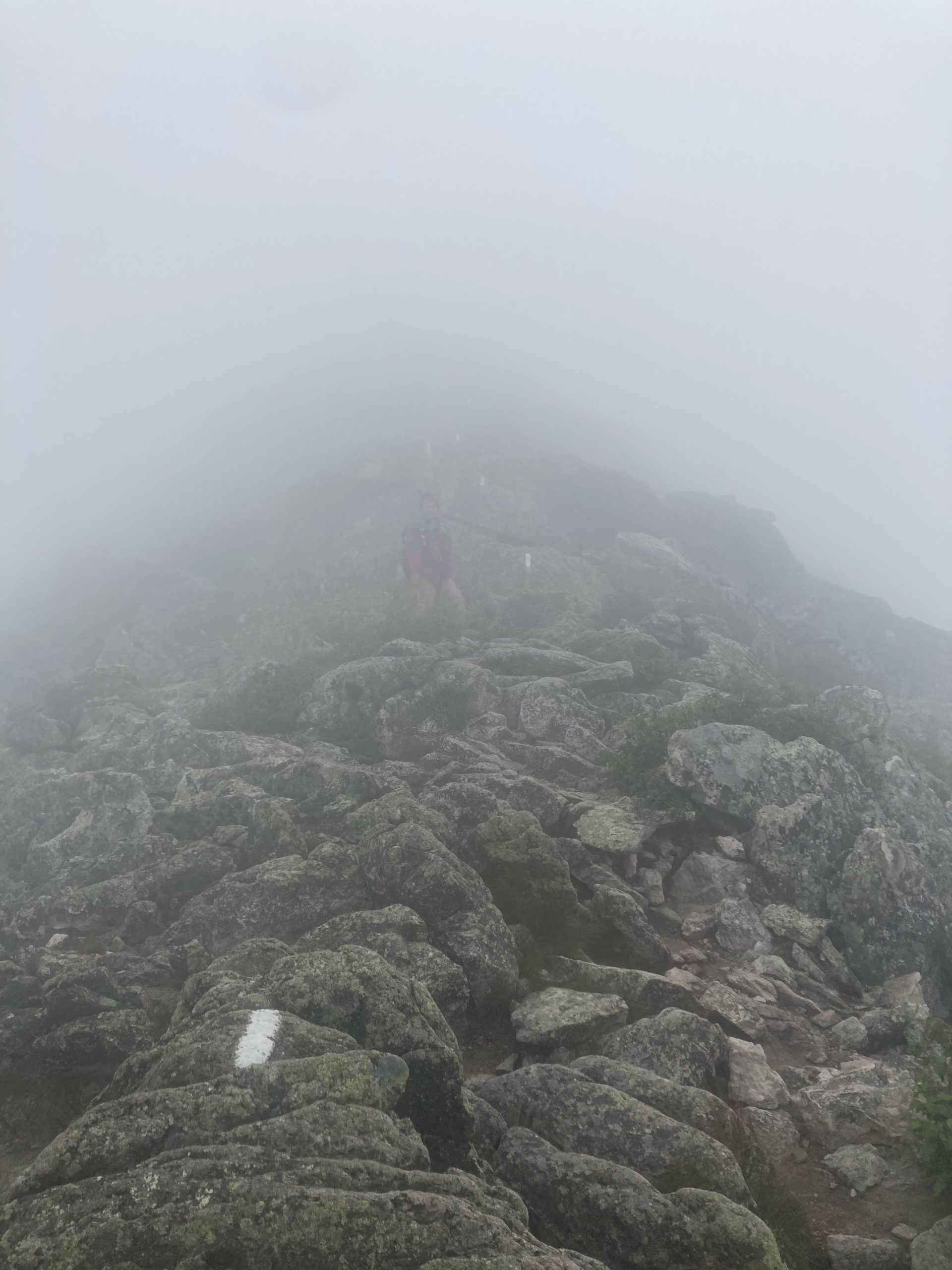 You can barely see me

It felt as if we were approaching some religious temple. The wind had magically stopped, and the mountain was begging us to her summit. The silence encouraged us to be alone in our thoughts and reflect on our journey thus far. For me, these fleeting moments reminded me of the moments on trail that have been burned in my memory. Little moments that I had archived in my head flashed in my mind, reminding me of how I got here. I thought about the tough days on trail where I didn’t understand the point of this trip. In those moments I imagined what my reality could have been if I would have just stayed in DC or gone home to Washington State. When the days were rainy, I thought about gore-tex rain jackets, sturdier umbrellas, dry towels, and toasty fireplaces. I used to wish for electric fly swatters when the mosquitoes and gnats swarmed me from dawn to dusk in Pennsylvania. There were lightning strikes that were too close, weird rashes that developed on my skin, and bogs that ate cell phones. I weighed close to 40 pounds less, and I wasn’t looking all that healthy. I got lost in New Hampshire, cried, and almost quit. I had mishaps, misjudgments, and failures throughout this long footpath. They brought an insurmountable amount grief and pain to a journey that I thought was going to be full of beauty and pleasure. But even after saying all of this, I know this was the way it had to be. This was my journey and only mine. My experiences, however different and unordinary (or similar and ordinary), were meant only for me. And to say that I wouldn’t change anything is inaccurate. There are a lot of things that I wish I had or did. My tent leaked when it rained. I wish I had a better tent. My shirt built up so much sweat and never dried. I wish I had a different shirt. And there were many other things I would change if I did this exact journey again. But the collective imperfections and idiosyncrasies of this trip were what made it. A hot meal after a long day, cold water during the summer, and picturesque summer mornings were amplified and contrasted sweetly with all the unruly moments. I genuinely felt, during the majority of this journey, that I was at war with the Appalachian Trail. I felt like it was some tug-o-war match were at certain points I would win and some points the trail would win. I thought of the trail as being some rival who didn’t want me to finish. The trail dared me to hike when I knew I shouldn’t, and I would hike to purely spite it. It was a combative relationship that was developed through a lack of understanding, on my part, of the nature of the trail. But now at the very end, I understand now. And as the summit sign slowly makes itself visible to Margarita and I, the end inching closer and closer, I prepared to make peace with the trail.

We touched the sign together at exactly 7:52 AM, and I started crying. It was still very foggy and moisture filled the surrounding air. It was a perfect day to summit. We took our photos and shared a Dr. Pepper that we brought up as a celebratory drink. We were the only ones there, and we stayed at the sign for about 30 minutes before we decided to descend. We passed section hikers and other day hikers who were making a push for the summit as well. As we started to down climb, the clouds dissipated and the summer sun revealed itself to the world. It didn’t matter to us. When Margarita got cell phone reception, I asked if I could call my mother to let her know that I was done. I called her and my dad to let them know and told them that Margarita would help me get home in the next few days. After this, we continued to hike more and eventually walked by our final white blaze of the trail. We went to an empty table underneath a picnic shelter and waited for Margarita’s friend Emily to pick us up. I remember uttering to myself in my tent on night one of this trip “this is going to be a very long summer.” Now at the very end, I was thinking that this trail ended too quickly. 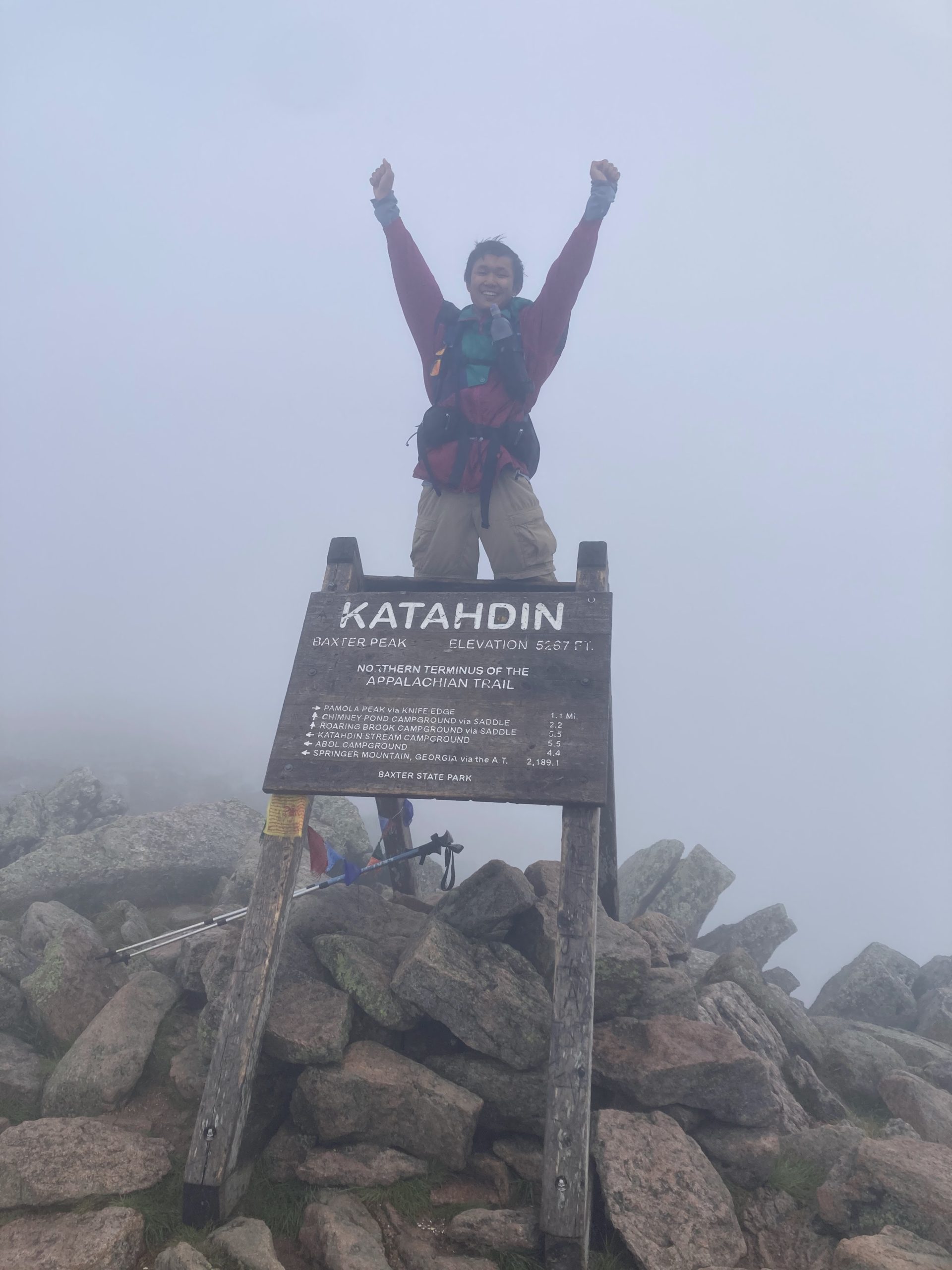 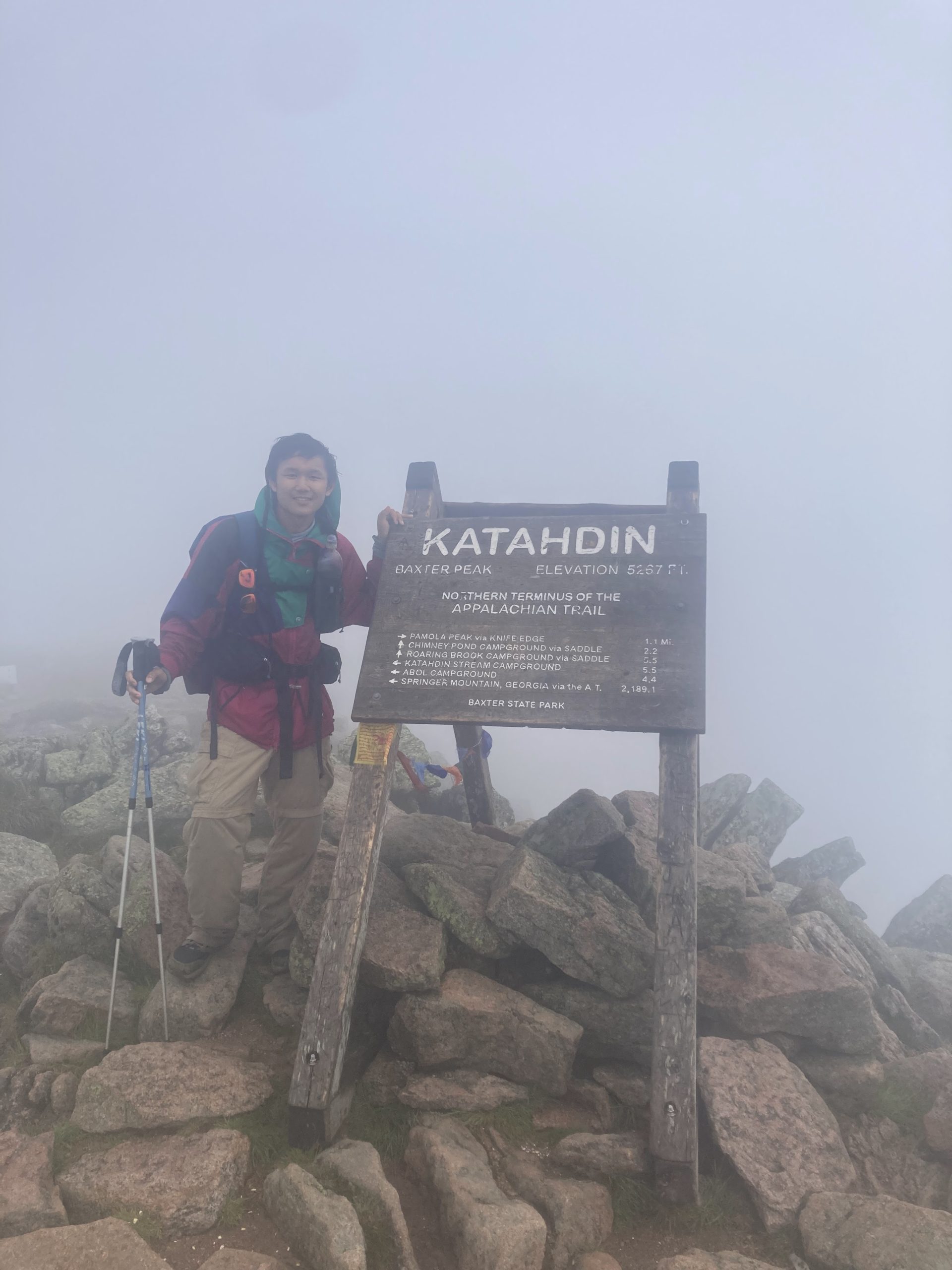 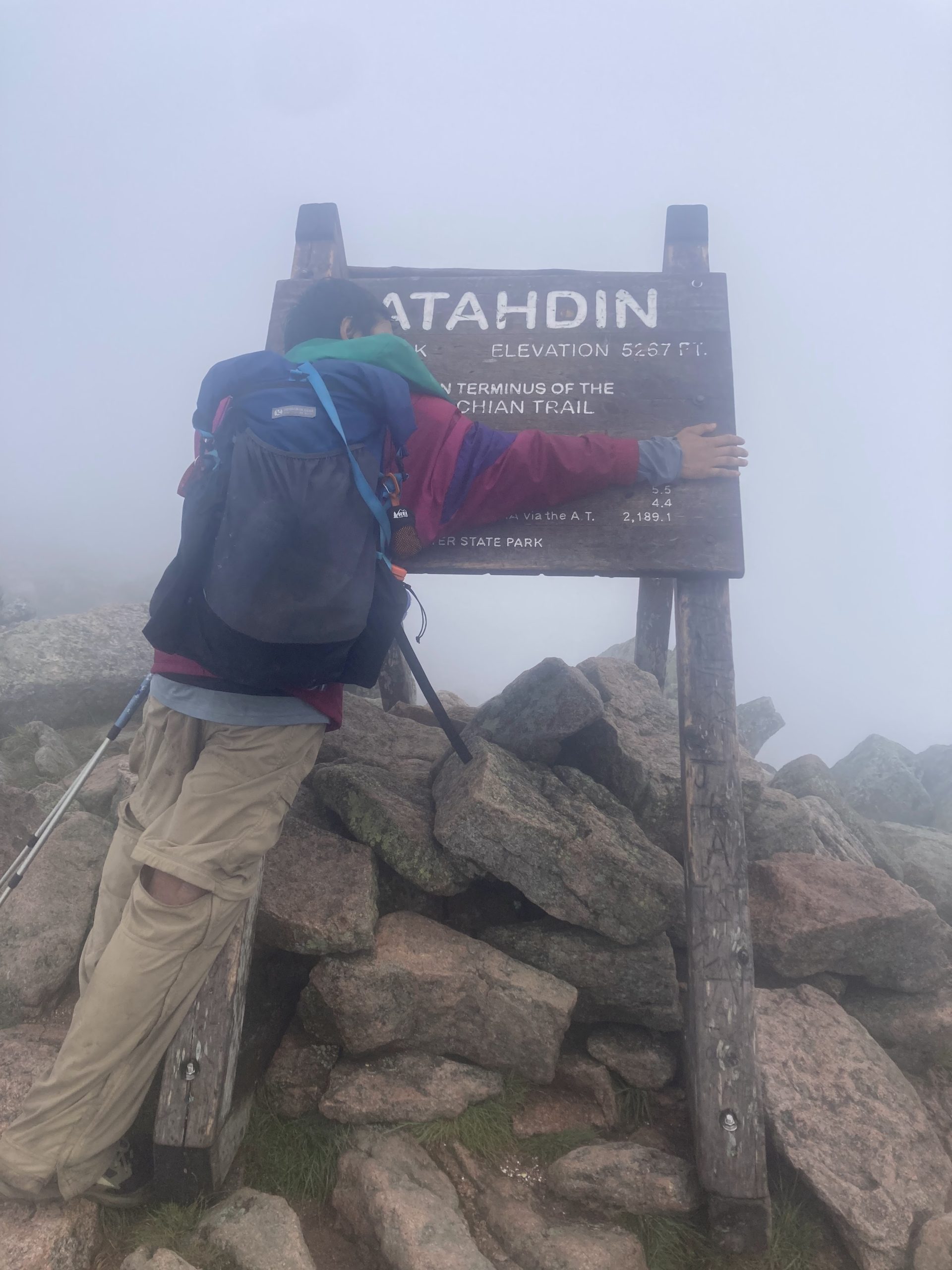 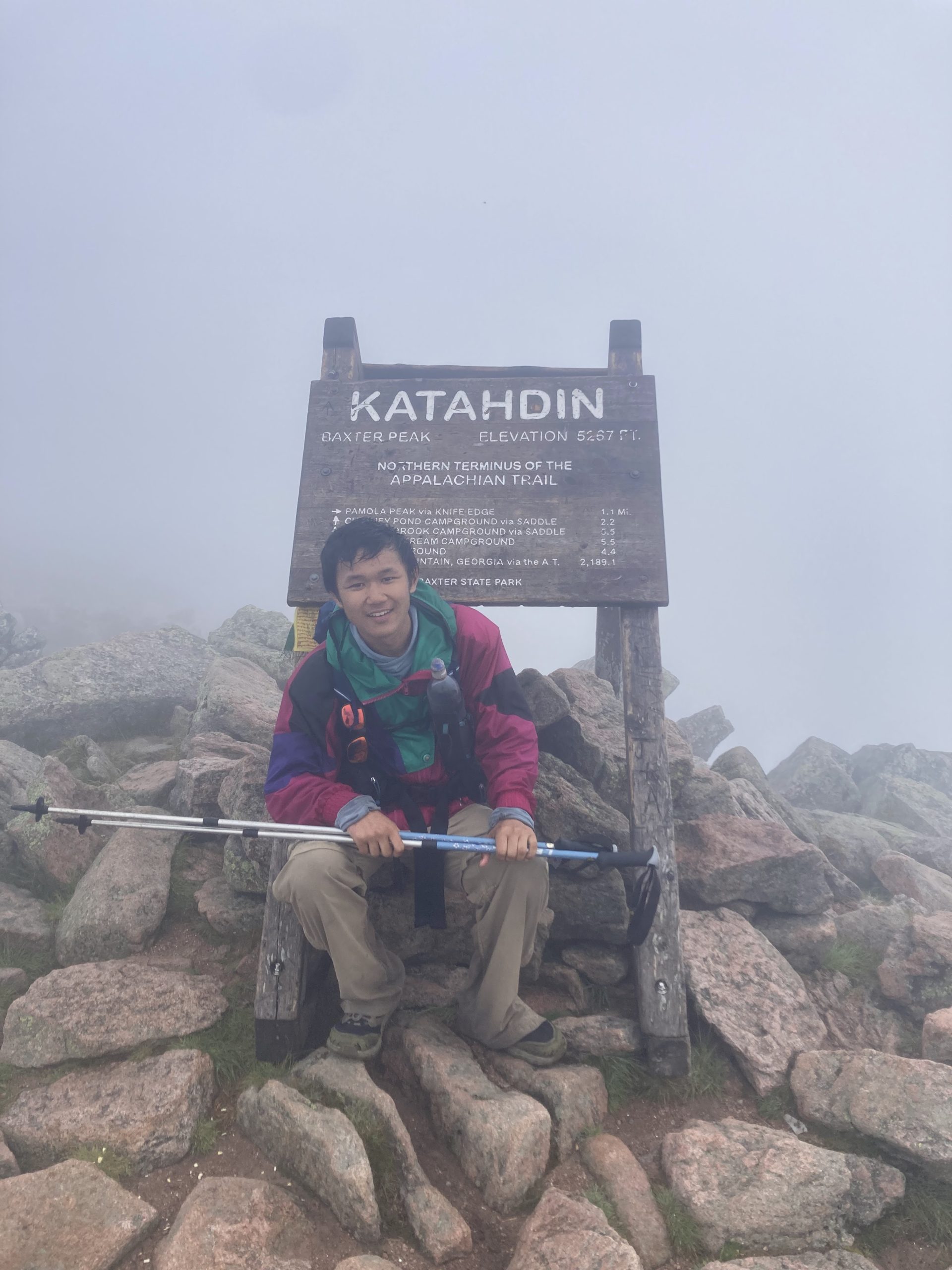 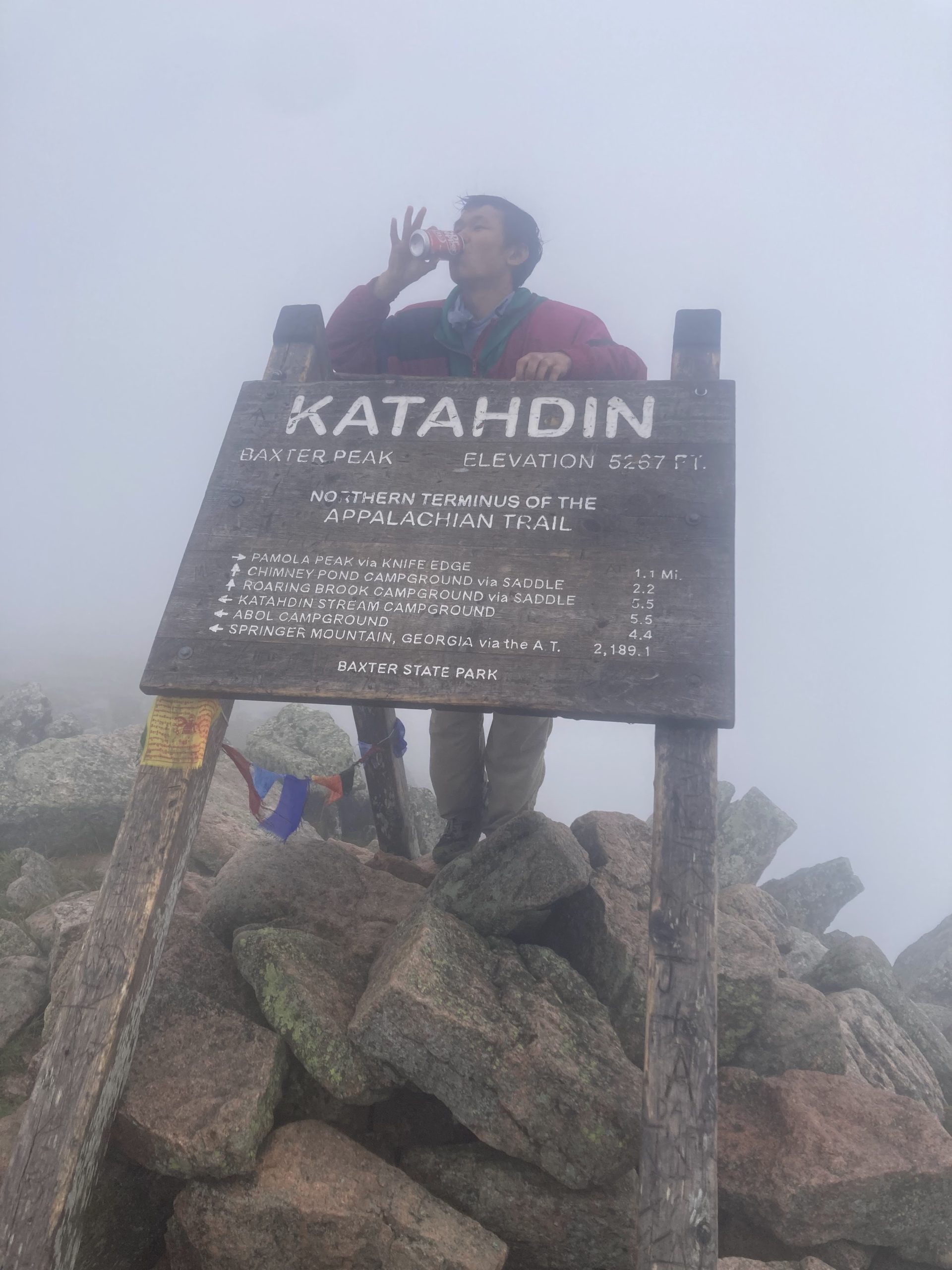 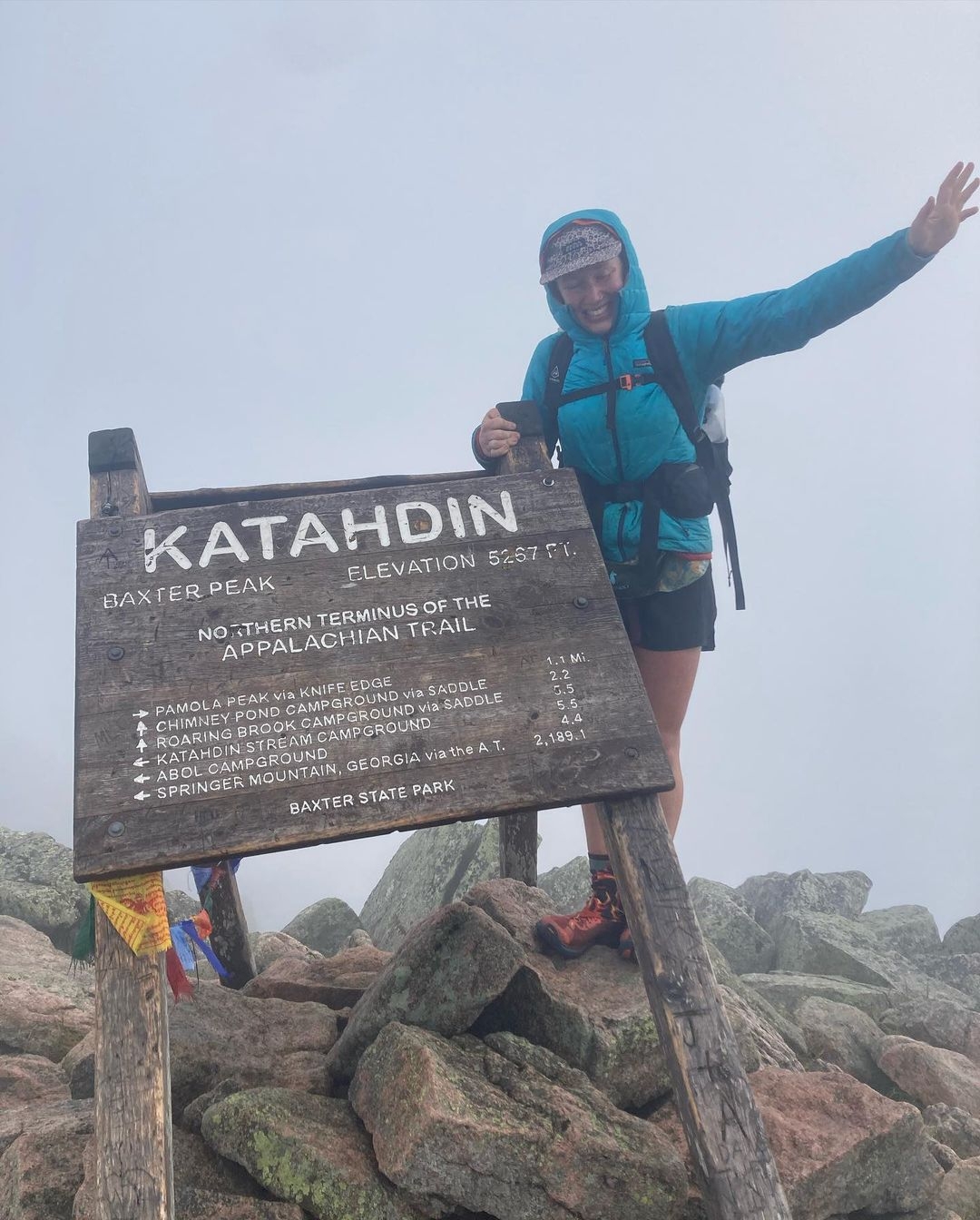 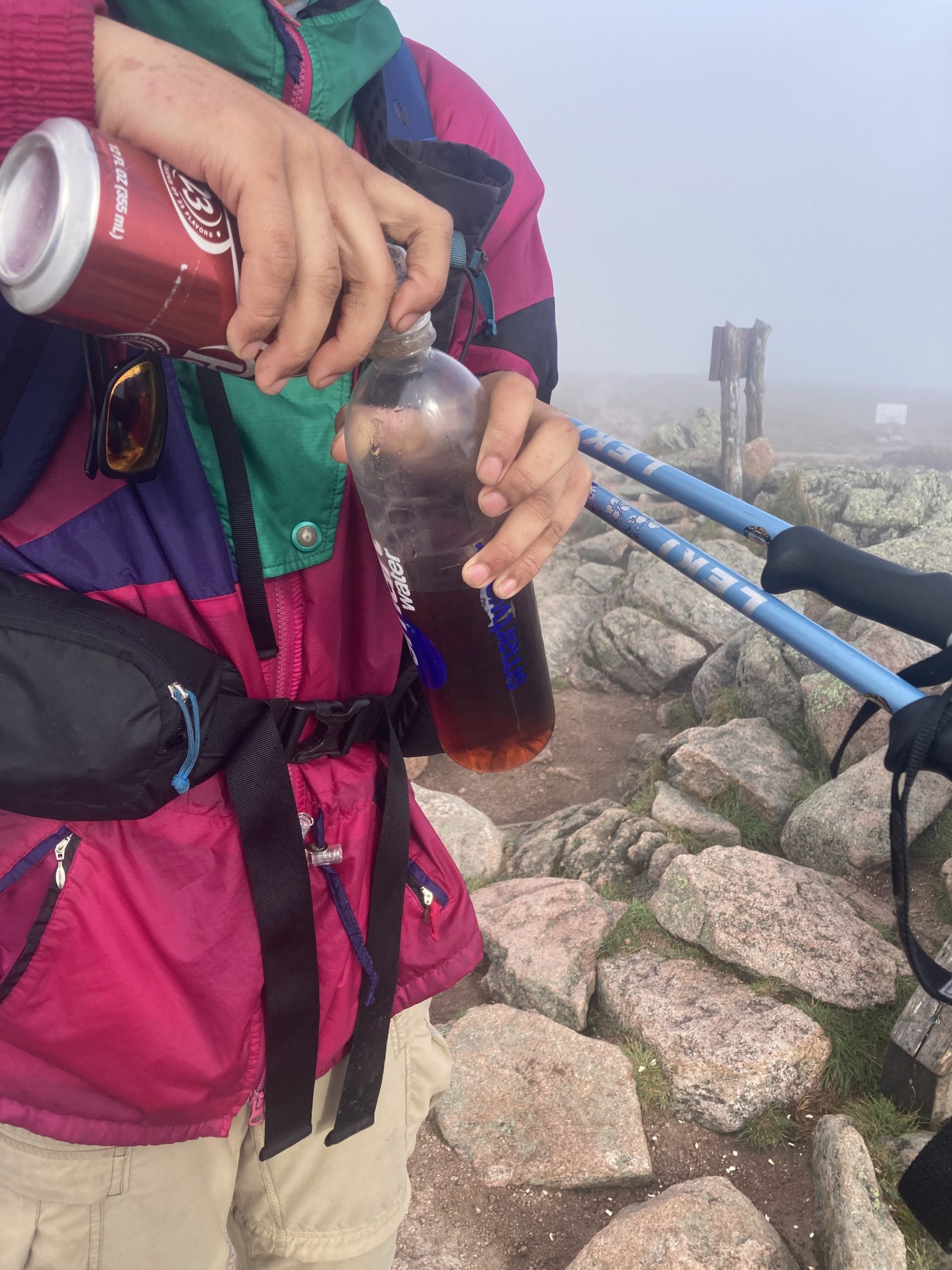 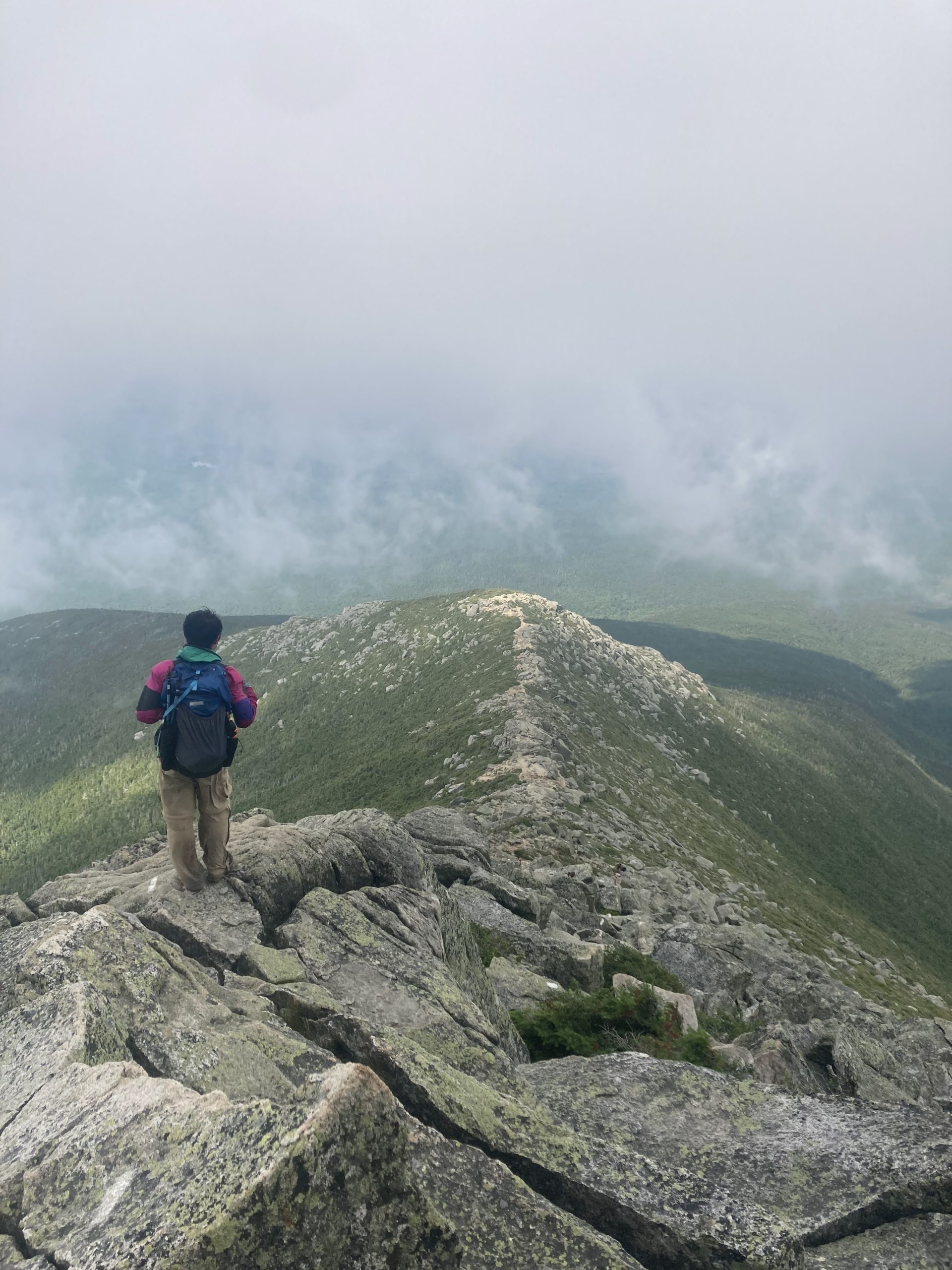 QUICK STATS OF THE HIKE

Thank you all for following my trip on the Appalachian trail. I have received a lot of positive messages from people who read my reports. My writing is very informal and not checked regularly for grammar and spelling mistakes so thank you for dealing with that. There are still things I plan on sharing on my thru hike but I’m trying to balance this with school. This is why I’ve finished this months after my hike completion. It took a while for me to get a new phone, I had to adapt back to school and work life, and other things popped in my schedule that took me away from this. I apologize if I made people anxiously wait. I do want to say that the hiking portion of this journey had now come to an end. There is a second act, in which I will detail later, but for the purposes of closing this chapter and starting a new one, I should formally acknowledge this in which I am doing now.