When I was young, I watched the movie “The Three Musketeers” (1993 version) and a particular scene had a dramatic impact on me. Towards the end of the second act, a message is sent out to gather the retired members of the Musketeers to fight for the King of France. Rousing music is played as arrows affixed with the message are fired at tree trunks and barn walls, and old men tear open hiding places. Bales of hay are moved to reveal false floors, and muskets and swords are passed around. Old and dusty uniform tunics are put on, and beaten and old looking men suddenly stand with pride and respect that one may not have expected them to possess. The scene had an impact on me because I was stirred at the idea of this group of lost warriors being brought out of retirement. It could only be matched by the feeling I had when old Ben Kenobi described a lightsaber as “more elegant weapon for a more civilized age.” It calls back to a lost age, a simpler time of greater honor and higher calling. And so it is that this scene has continually been running through my head in the last few months as I slowly but surely gathered my hiking gear and I get ready to return to one of the best homes I’ve ever found, The Appalachian Trail. 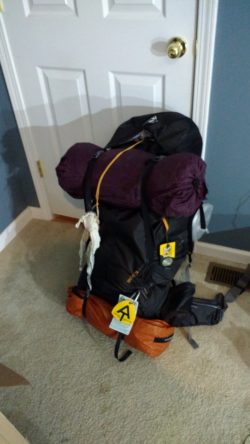 Que the greatest power group ballad of the nineties https://youtu.be/ofA3URC1wyk

I left the Trail last August, after spending six months hiking from Georgia to Harper’s Ferry. Admittedly that was a slow pace, but it’s six months I’ve sincerely appreciated. Since then, I’ve been working as a therapy and education assistant for a children’s mental health unit in Cincinnati, Ohio. This has been a fairly drastic change from my previous work experience in the world of tech support. The kids we work with are struggling with a range of emotional and behavioral issues, or have become a risk to their own safety. It was a stressful work environment, and I gained a great deal of respect for the people who work there day in and day out. I won’t pretend that the kids are darling angels (one bit my hand bad enough to require a trip to the hospital) but they also had some amazing moments, like when I’d tell them stories about waking up to find a bear outside my tent or almost stepping on a rattlesnake. Their curiosity was almost insatiable. In other words, they’re human, with all the highs and lows that implies. (feel free to make a donation to St Joe’s at https://stjosephorphanage.org/donate-now/ and be sure to put “Crisis Stabilization Unit” in the field marked for “other”)

The major downside of this job though is that it’s not particularly conducive to training and conditioning for the Trail. You’re exhausted at the end of a shift, but you haven’t necessarily been getting your legs used to long climbs or developing endurance in your core. To make matters worse, I spent most of my time working third shift, which often left me with poor sleeping habits and and an even worse diet. All of which produced far more weight being regained over the winter than I am comfortable admitting. I lost almost a hundred pounds last year, and far too much of that has returned. 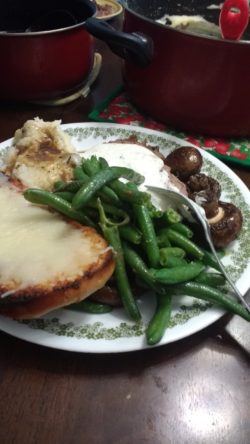 All is not lost though. I did still get some good day hikes in. After finishing with the trail, I returned to live in Northern Kentucky. One of the wonderful things about this area is that it’s sufficiently metropolitan enough to allow for comfortable and convenient living with large grocery stores, local entertainment, and easily found community, but it’s also close enough to rural areas to have some great local parks with short hiking trails. This meant I could get in a hour long hike even during the most hectic weeks, not always getting a great workout, but at least keeping my legs used to inclines and my mind still hungry for a few minutes next to a quiet stream. By no means is this truly sufficient, but I’m hoping these afternoon trips will make the difference in my ability to keep my sanity in the coming weeks. 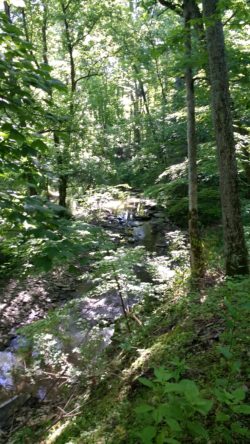 That sanity is being tested, however, on the way to Maine. I made the decision to hike as a SOBO this year for a number of reasons, primarily because I like the idea of a more solitary hike compared to starting in Georgia. This unfortunately has meant a more labyrinthine journey to get to my starting point. A drive from Kentucky to Georgia is fairly easily managed, but Maine seemed to require flying. I’m not against flying per se, in fact I rather enjoy the actual sensation of taking off into the sky, born to the clouds by the sheer power of aerodynamics. I have little patience, however, for crowded airport lounges, tight seating arrangements. This included the added fun of a passive aggressive neighbor on my first connecting flight who complained to me about the folks sitting behind us pointedly loud enough for them to hear. This lead to them giving me the death stare despite my “I seriously don’t know this guy” look. All along with the general overall chaos, seemingly designed to push a rabid anti-socialite like myself to the brink. 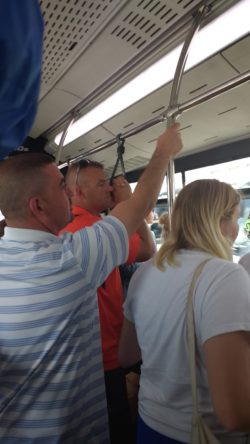 Thankfully, I survived the trip and I’m now sitting at the Bangor Airport waiting Dave, a friendly guy I met via Facebook who’s working on his trail angel wings, and Violet, a fellow Trek blogger I met on the trail last year. Together, they’re giving me a ride to Baxter State Park. 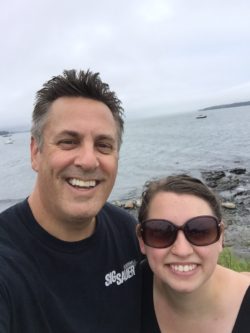 Dave and Violet. The last people who will see me freshly showered for a while

Tomorrow, my fat gut will summit Katahdin and a whole new journey begins. I can’t wait to share it with all of you. 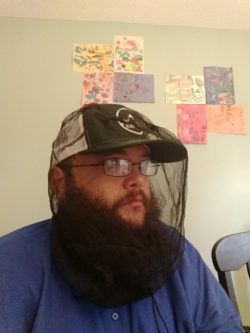