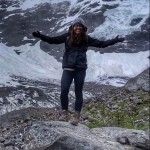 Surviving and Loving the First 500 Miles on the Appalachian Trail

I started the Appalachian Trail (AT) on March 2 with my sister Laura and we have been on the trail now for over a month. We have currently covered over 600 miles and have walked through three states, currently on the fourth. I’m proud of us for making it a quarter of the way thus far. 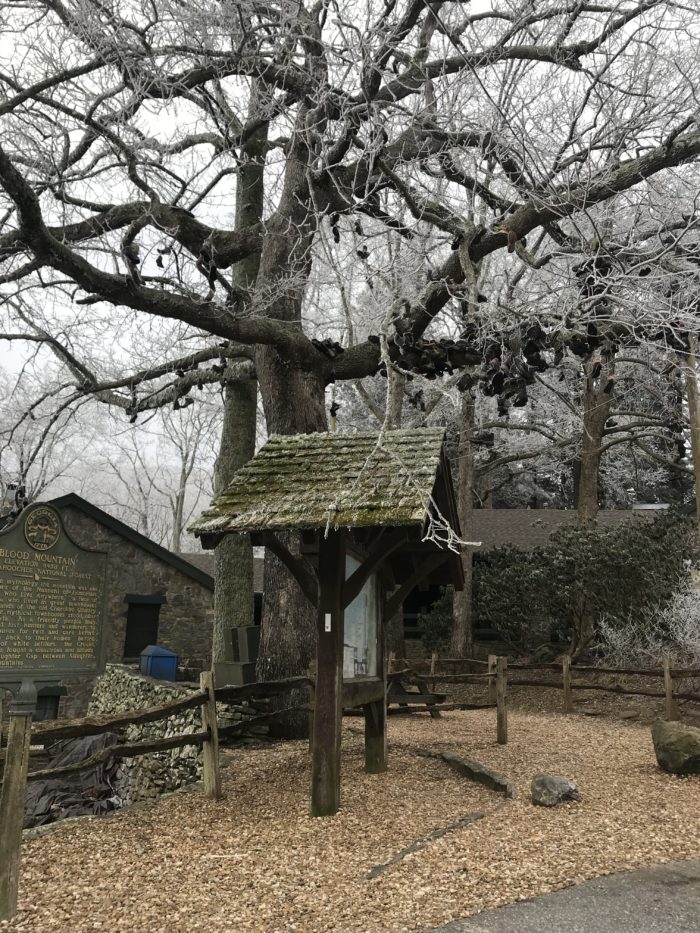 The black dots on the bottom right of the tree are all shoes.

Only about 25 percent of people who start the AT actually finish. A lot of people quit within the first few days of the hike. There is even a tree at mile 31—Neel Gap—that is loaded with new, barely used hiking boots and trail runners from people who decide to quit the trail and apparently are so resolute they chuck their footwear onto this tree.

I witnessed the downward spiral of a couple of thru-hikers myself after a particularly cold night in a shelter. My sister and I had befriended two other women in the shelter and after all waking up freezing that morning, we made a plan to hike 19.5 miles (our biggest mileage at that point) to a hostel together that night. They were ahead of us at the start of the hike. After hiking one mile down the trail that morning, the ladies informed us they had decided to quit the trail. They found a ride to the closest town and we never saw them again.

To be fair, so many people quit at the start because it is a big transition. I still consider the first week on trail the toughest so far, mostly because of the weather. During our first week, we hiked through the pouring rain and freezing temperatures, camped on snow, and “slept” through 15-degree nights. I was trying to adjust and nail down a daily routine while at the same time was so cold or wet that I could barely function. Granted, the weather has continued to be a challenge for the hike, but I am more familiar with handling it. 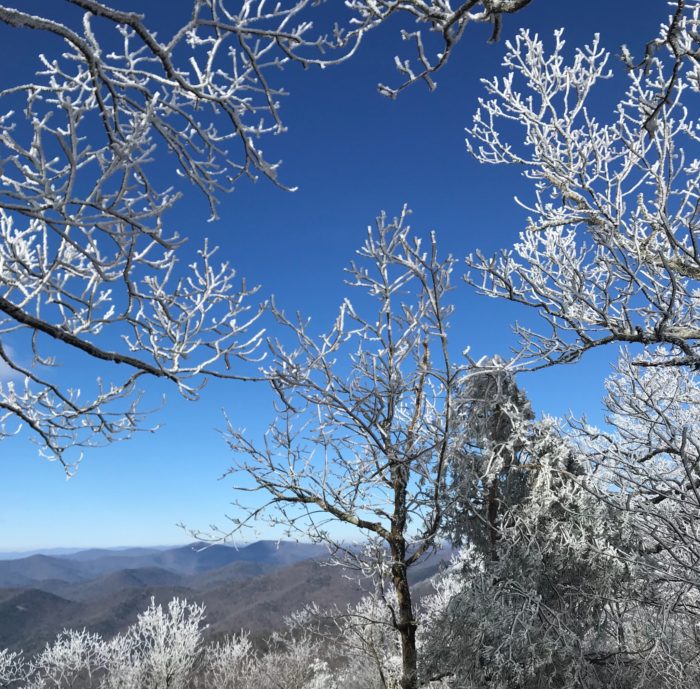 Thankfully, I was able to stick it out that first week because:

(1) I promised myself not to make any decision about leaving until I spent a month out on the trail, knowing it would take time to adjust to trail life.

(2) I changed my mind-set to focus on the day to day rather than my progress to the finish line (Mount Katahdin, 2,200 miles away).

(3) I started carrying Snickers, which can turn any bad day around.

It is tradition that every thru-hiker gets a trail name. It becomes the new and only way you identify yourself to anyone you meet on the trail. 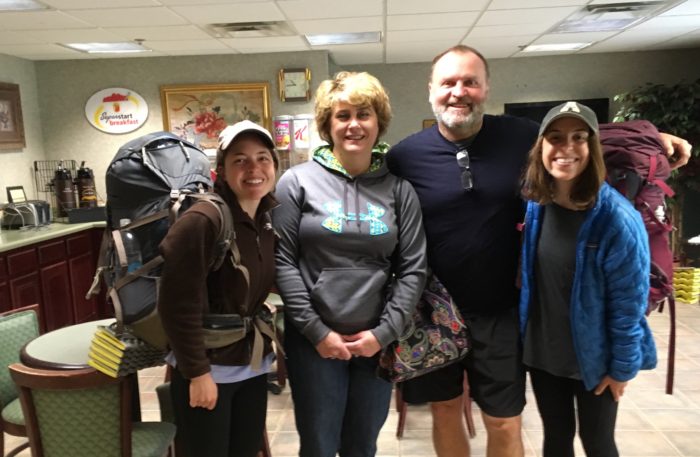 Haymitch with his wife, Pam

There are multiple ways one is dubbed their trail name. It could be for doing something silly like accidentally burning shoes multiple times while trying to dry them off by the fire, earning the name Fire Soles, or for a previous job held before the trail like Coach, or even for resembling a celebrity or fictional character like Haymitch from the Hunger Games. The possibilities for trail names are endless. 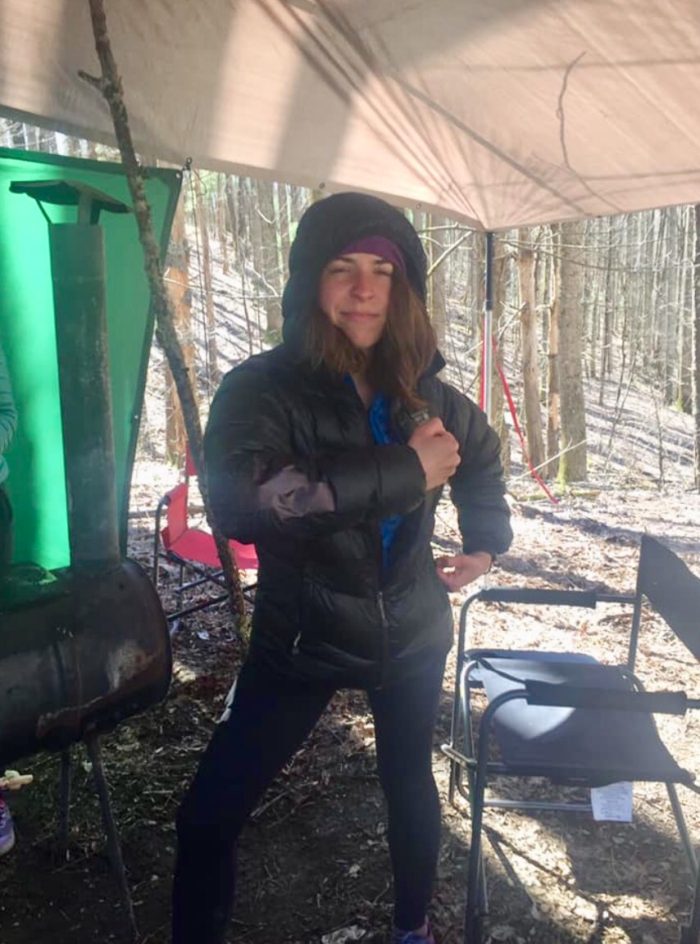 It was not for a few weeks—not until mile 250 or so—that Laura and I got our trail names, which is late in the game compared to other hikers. Laura was named Double Puff because she hikes in two puffy, or down, jackets. Her name changed to just Puff, however, after she burned a gigantic hole in her down jacket on the stove of the famous Fresh Ground during trail magic. I was named Shine for my sunny demeanor and excitement about a moonshine tasting in Gatlinburg. People also tend to call us the Sisters, a name I really enjoy. We have met some other families hiking together, which we love, but we are the only adult sisters we have seen so far. 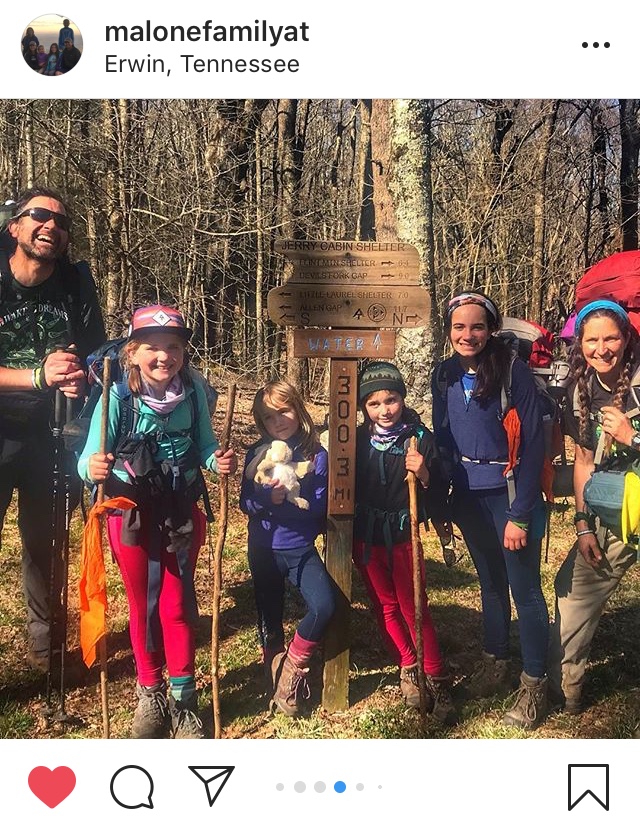 One of our favorite thru-hiking families we have met so far is the Malone family, with four daughters ranging ages from five to 13! Not only are they thru-hiking the trail, which is impressive in itself, all the kids are hiking for a different charity of their choice and keeping up with schoolwork on the trail, mailing in homework and tests and Skyping in for presentations when they get to towns. The parents help carry the kids’ textbooks and are even teaching their 5-year-old to read on the trail. They are incredible.

Quick side story involving the Malone family: Laura and I stayed at the same hostel as the family in Georgia one day and in the morning we happened to all be going through the breakfast line together. As I went to grab some coffee, a lady who worked at the hostel looked at me inquisitively and told me I was too young to drink coffee. She said it as a statement and with such confidence it took me aback. Then I realized… she thought I was one of the daughters in the Malone family! Hopefully she thought I was the 13-year-old. 😅 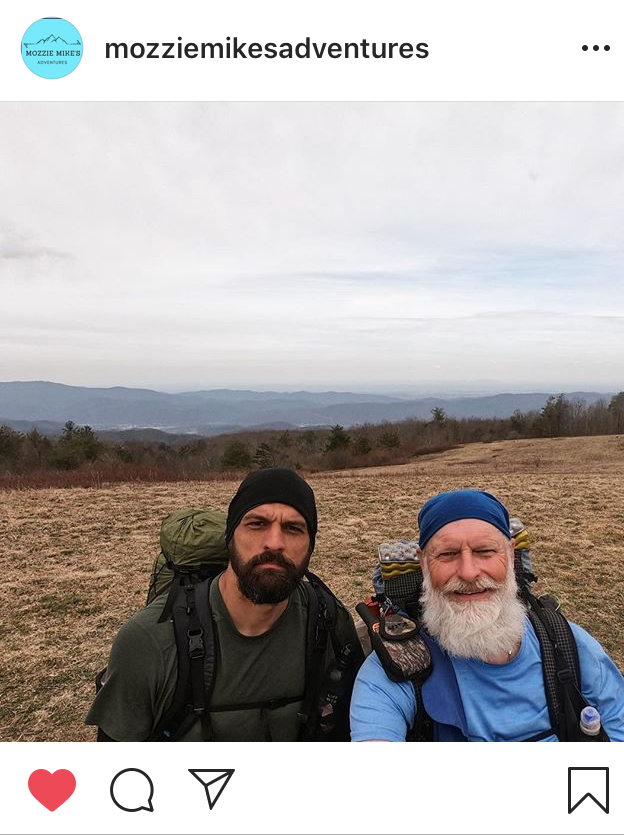 Another family favorite are Mozzie Mike and Juju, a father-son pair. They are lighthearted, witty, and mostly importantly, share Pringles with us.

One quick story about this family where my intent to do a good deed totally backfired.

On a rainy day, Mozzie Mike and Juju were the first to a small AT shelter on the trail and rather than claiming a spot, they set up their tents in the rain. As a result, Laura and I got a spot in the shelter which meant a lot because Laura and I hate setting up our tents in the rain. As a thank you, I tried to surprise Mozzie Mike and ran down to the water source in the rain to fill up his water bottles to save the trip. Typically hikers have dirty water bottles they fill at a stream and then filter it into their clean water bottles. So I filled all of the bottles Mozzie Mike had laid out. Turns out I accidentally filled Mozzie Mike’s clean water bottles with unfiltered, or dirty, water. Now he had no clean water or clean bottles to use. Instead of helping him out, I caused a greater headache. I felt so bad. Thankfully we laugh about it now.

Battle of the Sexes

One thing that has surprised me about the AT is that there are more men on the trail than women (at least in my experience thus far). I expected an even breakdown more or less but women have been far outnumbered. Laura and I are often the only women at a shelter, camping spot, or sometimes even a hostel.

Being one of the few women, we seem to have (an unwanted) spotlight on us. Upon meeting us, the first questions we have received from a few men thru-hikers have been (1) “How old are you?” followed by (2) “Are you single?” We find these immediate questions rude and unrelated to our hike. I doubt they ask the same questions right after meeting other men on the trail.

As to why there are not as many women out here, I cannot be sure. Perhaps it is just the time of the year and more women plan to start later in the season. Perhaps women have concerns holding them back such as safety. Perhaps there are just as many women and somehow I’m missing them all. Either way, I hope that more women feel empowered to thru-hike AT. We need that girl power! I have had a positive experience thus far, I have felt safe, and hope this will continue for my trek.

When it comes to food, there is a common phenomenon every thru-hiker experiences on their trek. This epidemic is known as hiker hunger, when a hiker’s appetite is limitless and no amount of food can satiate it. I have been bitten by the hiker hunger bug. When Laura and I get to town, we head straight to food, followed by snacks, sweets, and more snacks. As a person who loves to eat, it’s glorious. My friend’s parents, Frank and Charlotte, graciously hosted Laura and me for a few days at their home in Boone, NC. I felt for these poor people because anytime I interacted with them, I was munching on something. One evening after a big dinner Frank earnestly asked, “You’re not full yet?” No, Frank. Never.

As for food on the trail, I know what you are wondering, and I have been asked this by people before, but thankfully no, I do not have to carry all the food I need for the entire trek at once. The AT passes near towns typically every four to six days where we are able to hitch a ride and resupply before getting back on trail. Because the AT typically passes by small towns, we often have to shop at Dollar General.

In terms of cooking food on trail, Laura and I are stoveless. No warm meals or boiling water for us. Instead, we cold-soak, or in other words use water and time, to “cook” our food like oatmeal and rice noodles. Then, we also supplement our diet with no-cook meals like tortillas with peanut butter, Clif bars and pre-cooked rice. When we share this with most other thru-hikers, they are stunned. But they should not be impressed. The reality is Laura and I are just too lazy to wait to boil water or clean more dishes. And there is not much we can cook anyway given our diets (Laura is vegan and I am gluten-intolerant and also try to eat vegan when I can). Except for the few times our cold-soak dinners have frozen or our food bags have been eight-plus pounds after a big resupply, we have yet to regret the stoveless life.

Favorite part about the trail so far: 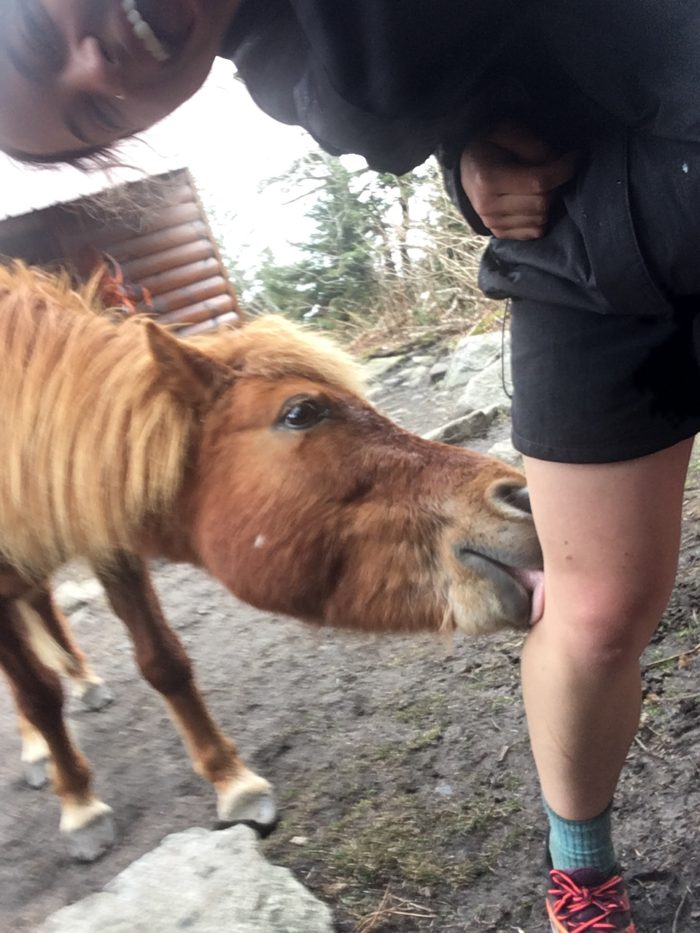 Favorite section of the trail:

The wild ponies at Grayson Highlands State Park, the Nantahala Forest in NC, the balds like Max Patch and Big Bald, and the green pastures with cows and wildflowers. 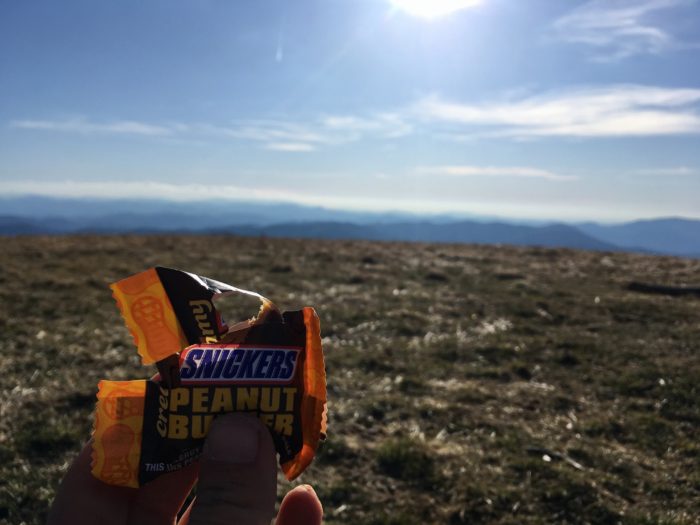 Favorite food on the trail:

I feel solid about my prospects on the AT. However, the potential obstacles I could see knocking me off the trail in the future would be major injuries, illnesses like Lyme disease or an unhealthy mind-set. I am thankful for my physical health and mental stamina to date and hope it will sustain as I push on.

North Carolina native hiking the Appalachian Trail 2019 with my sister. Environmentalist who believes in protecting natural spaces and enjoying it while it is still here. Adrenaline junkie. Dog and french fry enthusiast.