After tackling the 76 miles of the Foothills Trail’s main walkway in September my dad and I decided it would be fun to hike every spur trail it had to offer.  These would be a series of fun, casual hikes with family that would allow us all to spend more time together before my departure in February of next year—Caesar’s Head aside.

The Caesar’s Head spur trail is 14.2 miles, mostly ridgeline walking.  While it doesn’t end at Caesar’s Head specifically, it does start and run through miles of the state park.  The SCTrail’s website starts its description of the trail by calling it “arduous,” which isn’t exactly a measurable form of difficulty, but it definitely made our group plan for a long day.  The trail passes near Raven Rock Falls and the steel suspension bridge that hangs above the water.  It follows the border of Greenville’s city watershed and gamelands as well, meaning it’s best to wear bright colors and avoid going off trail as trespassing is illegal and getting shot by a hunter isn’t fun. 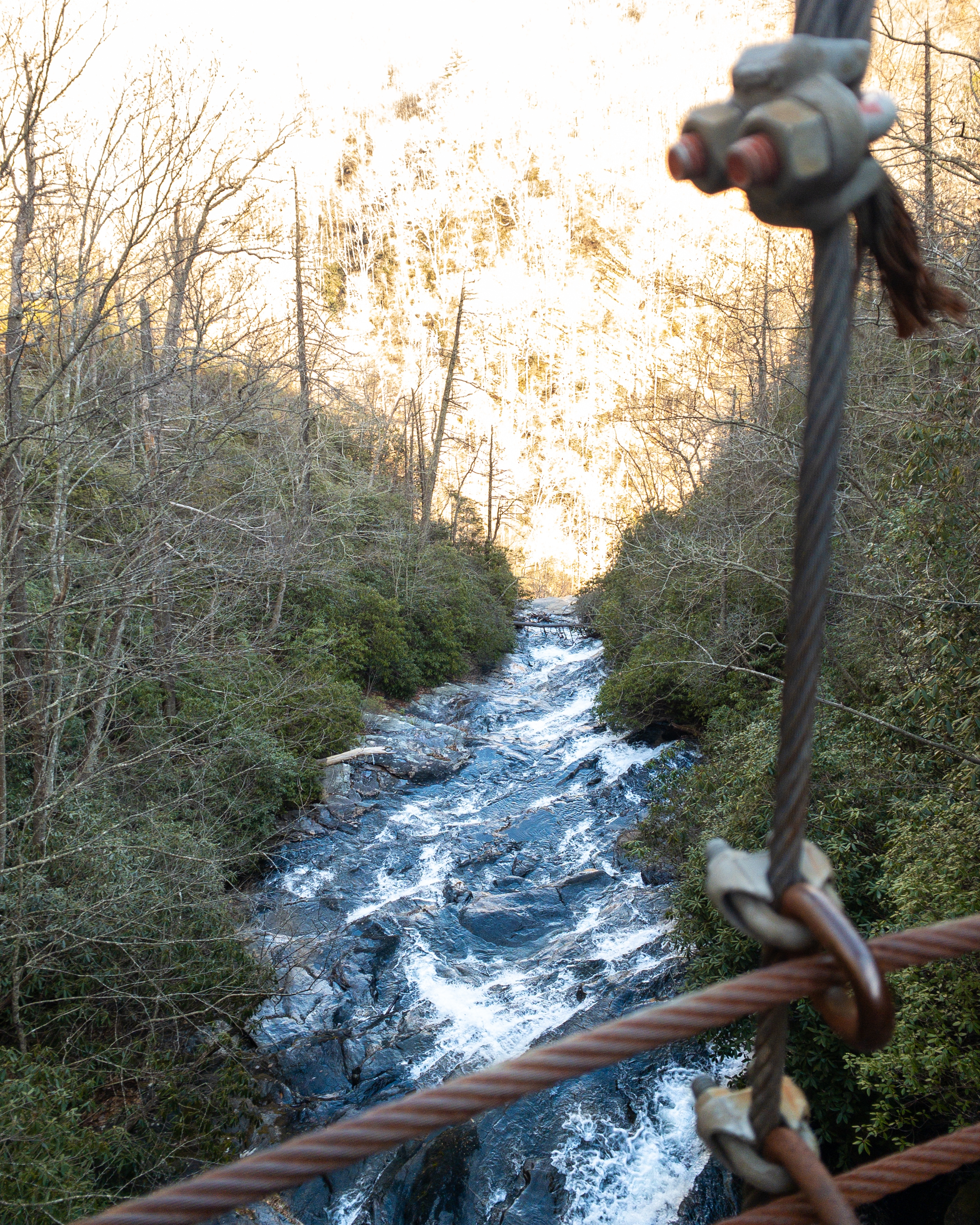 Per usual we got up at 5 a.m., my brother, dad, the two dogs, and I, and we hit the road toward Sassafrass Mountain.  Dad and I enjoyed our morning atop Sassafrass more than any other part of the Foothills Trail during that hot, dry September trek, and we wanted to share that experience with my brother before we got on our way.  After watching the sunrise from Sassafrass’ viewing platform, we headed over to the Raven Cliff Falls parking area where the trek began. 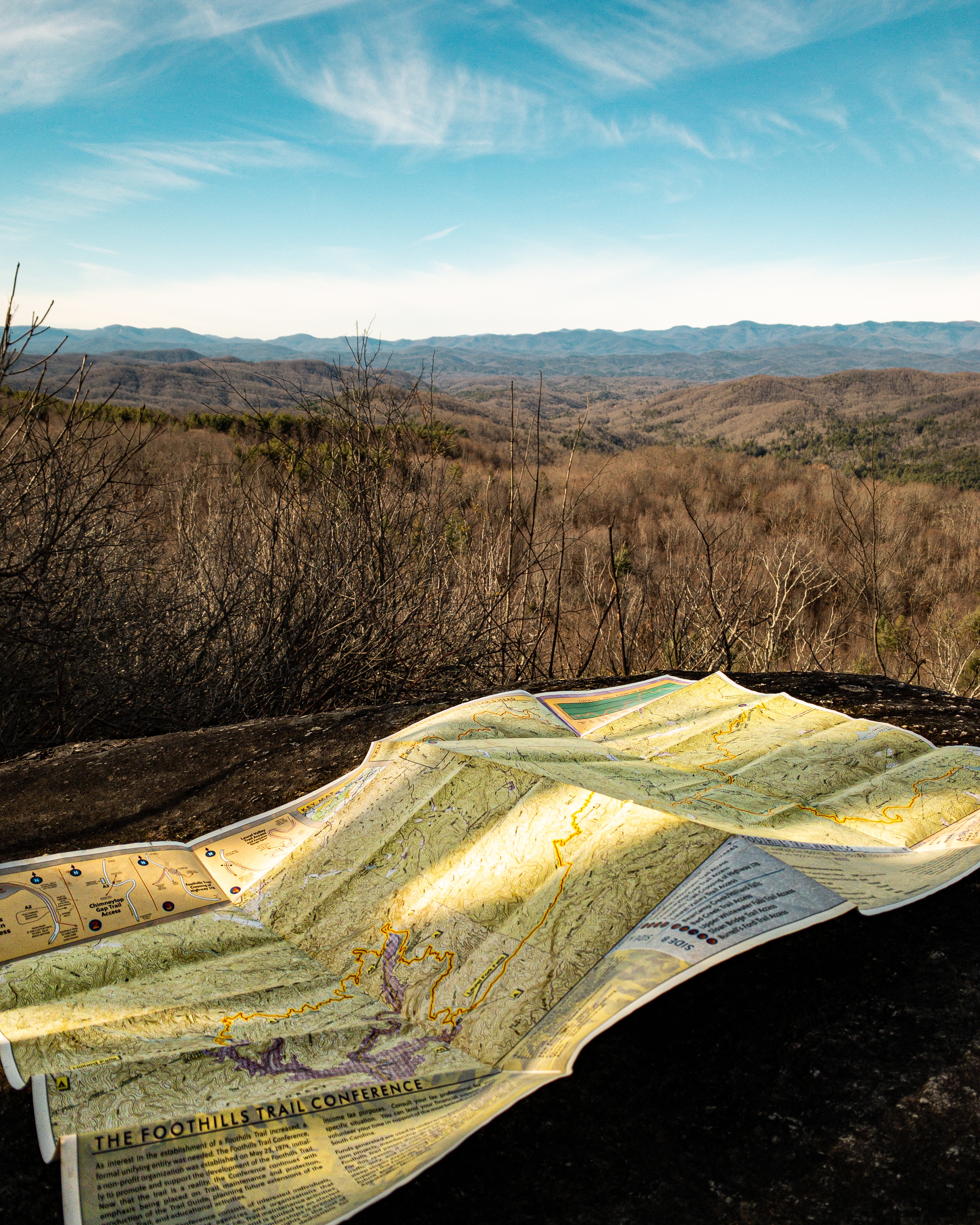 The plan was to push through the cold morning and then enjoy lunch somewhere shy of the halfway point, so 7ish miles or so.  Add in some extra time getting the pups to not fight over leading the group and an on-the-fly side trip to Raven Rock Falls, and lunch came more around mile five (Slicking Gap).  The morning was actually rather easy, and so the hot soup and sandwiches were more an excuse to stop than a reward for a hard-fought morning.  Arduous isn’t what things had seemed. 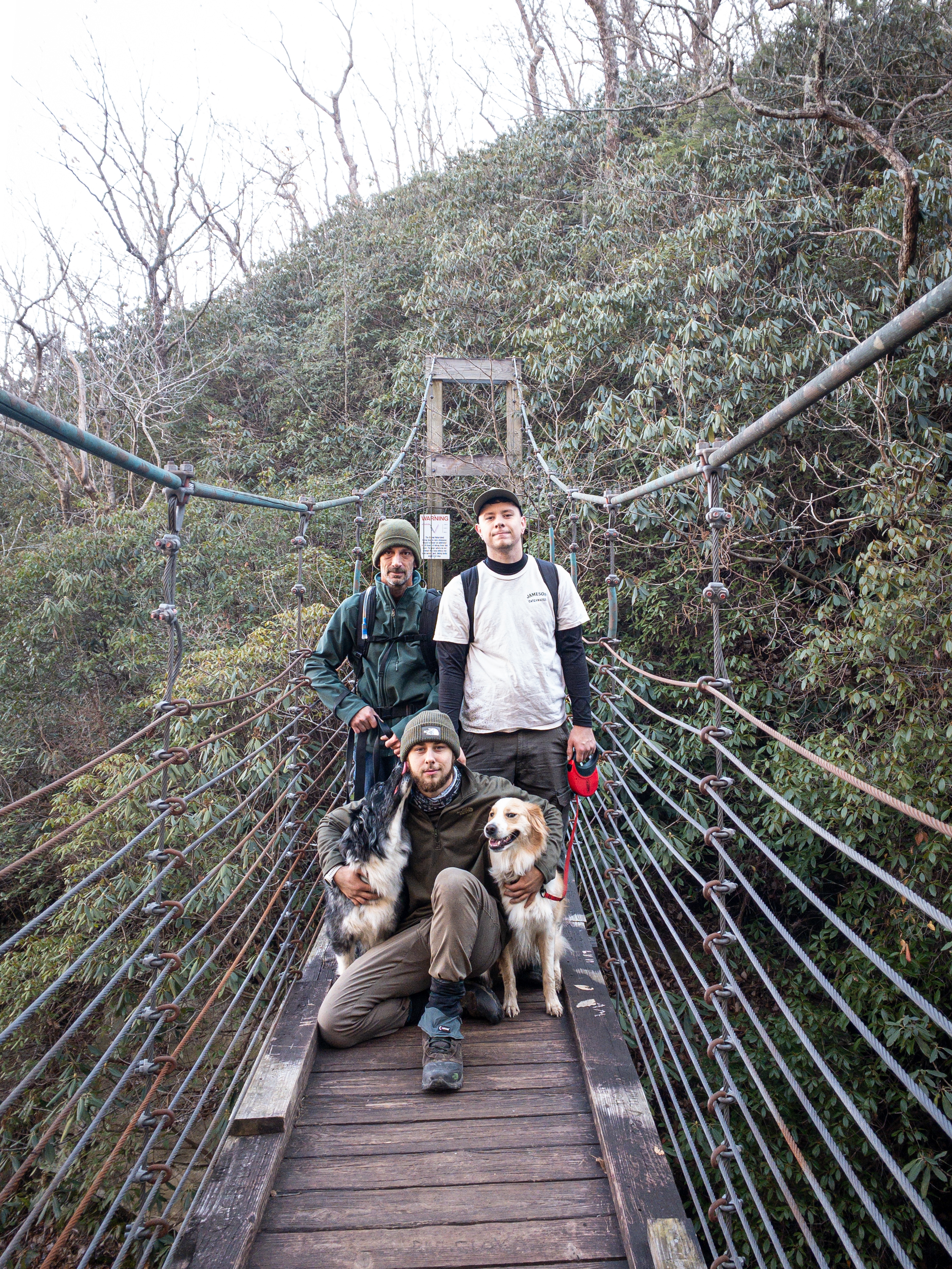 Lunch was quickly followed by a dive down the mountain into Slicking Gap, and while our dives were followed with climbs, we still felt really strong well into those next five miles or so.  We passed frozen mountainsides with icicles as big as we were, huge cube-shaped boulders that were split down the middle, and even some treestands at the edge of the gamelands.  We passed through those sections in silence, with everyone simply enjoying the walk and the landscapes.  The dogs were ripping icicles off rocks as we passed and chewing on them as they walked.  The orange property markers for Greenville Water Resources guided us just as well as the blazes, and the entire afternoon was spent rubbing shoulders with its boundaries.

I think the best part of the afternoon was walking through what appeared to be an old burned area of forest.  It was barely a trail and more of a divot that shot through briars, piles of downed trees, and patches of moss the size of my front lawn.  It felt more natural, more rugged than the rest of the trail, and we couldn’t help but wonder what the trail engineers were trying to tell us about these lands as we walked through.  We drank it in and walked until sunset. 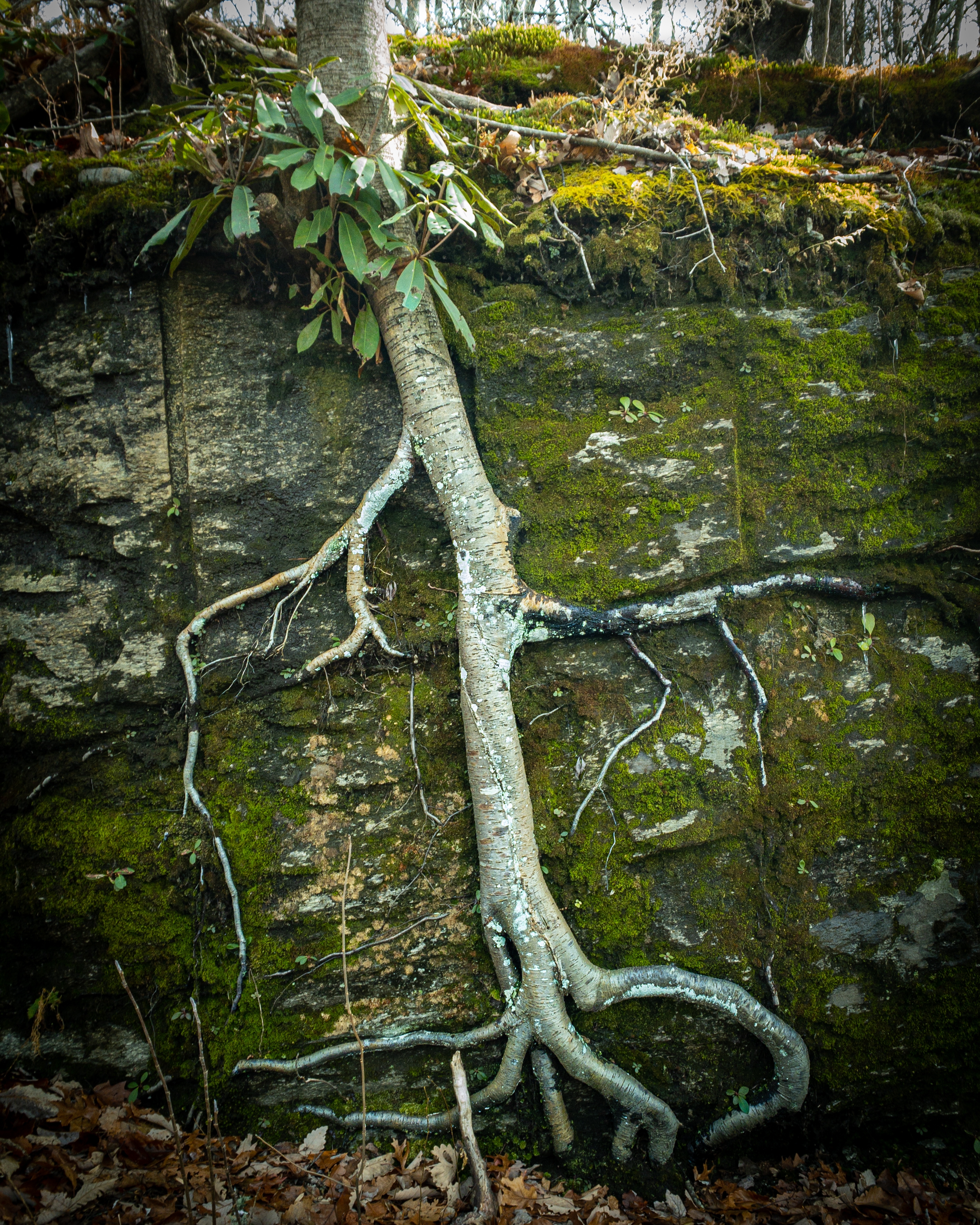 As night started to fall so did the group’s morale.   It’s hard to be bubbly and happy at the end of a long, cold day.  Moving forward meant more strain and climbing, but sitting still meant the cold creeping in.  We had everything we needed should we stay out there overnight, but it wasn’t in the game plan, and I feared the later start would mean that we finished by headlamp instead of celebrating atop Sassafrass’ viewing platform.

Luckily I was wrong, and we popped out of the woods right as sunset was at its peak.  I ran excitedly, celebrating the end of a successful day, but more importantly a day of training in the company of my family.  The horizon was smothered in a pink, red, and orange paint-splatter that glowed intensely as it drained behind the mountains in the distance.  South Carolina was set alight while North Carolina’s Blue Ridge Parkway scattered darkness over the valley below.  It was an incredible contrast, and yet another incredible day on trail. 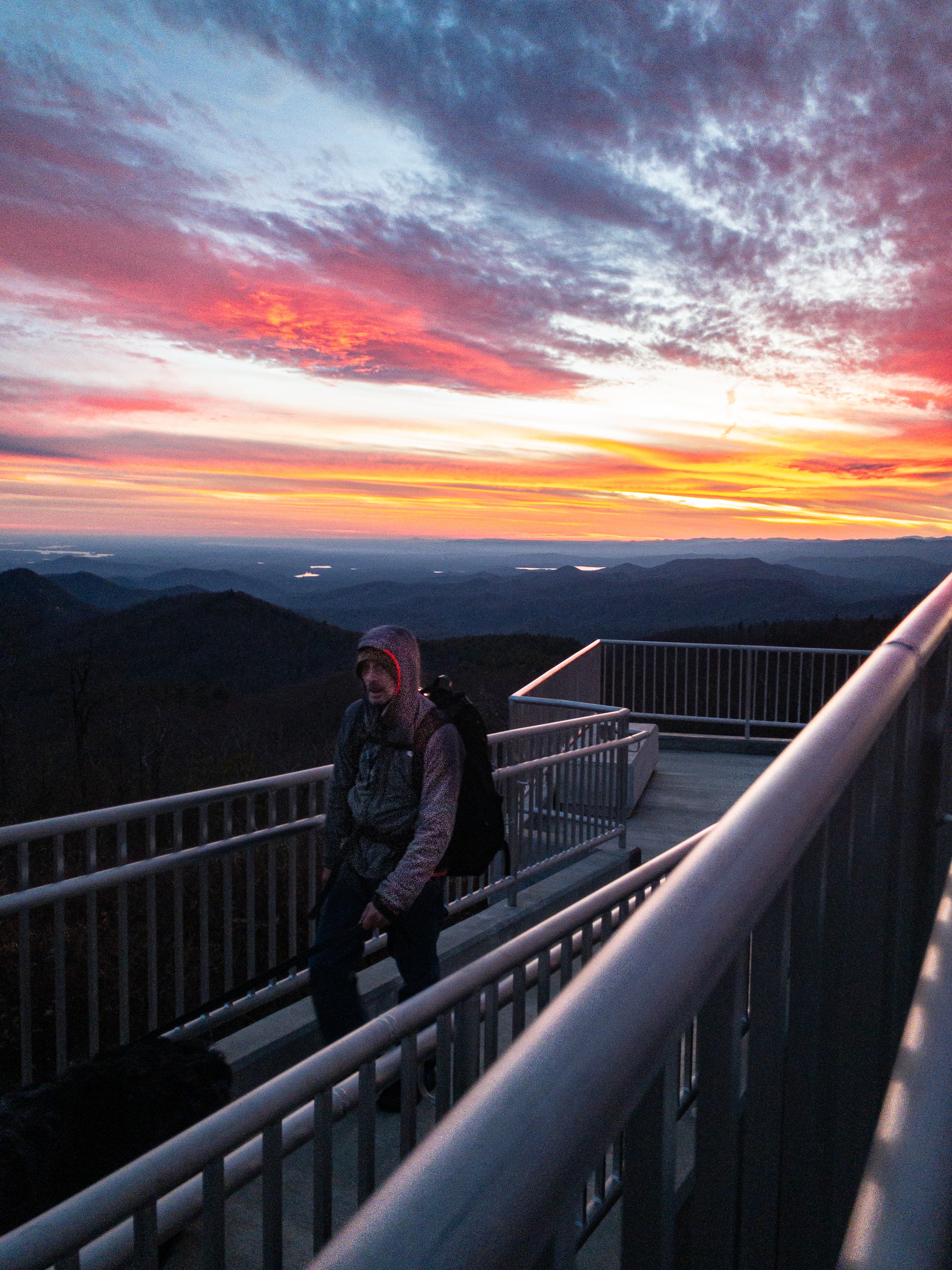