We are exactly one week out from our departure date and eager to be on our way! But there are still things to take care of. I was reminded of this while standing in the aisle of the local pet store 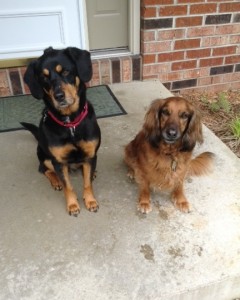 Corky and Brandy, the dogs we are leaving behind.

contemplating snacks for the dogs (who will not be going with us, but staying with friends and family). As I stood there mulling over the seemingly unlimited variety of dog treats, I heard my name being called. As I turned around, I was surprised to see a former colleague  whom I hadn’t seen or talked to in years. After an animated discussion about our respective dogs and their respective quirks, the conversation turned to what was going on in our own lives. Of course, I was brimming with excitement about our upcoming hike and, fortunately, my friend seemed interested in listening. She had lots and lots of very good questions to fuel the conversation– but one in particular gave me pause.

“How do you take care of business?”

We were standing in a public place in the middle of a store and I wasn’t sure if it was appropriate to describe the details of pooping in the woods–how we dig a hole with our ‘Little Deuce Scoop’, how we wipe, how we cover the hole, and what we do with the dirty toilet paper. It was a curious question and one that certainly needed clarification.

“Do you mean how do we go to the bathroom in the woods?” I inquired.

As I proceeded to tell her about our ‘business’, I realized that the minutia of this trip might be way too mind numbing–even for someone who appeared to be totally interested. For instance,  just figuring out how to get to Georgia (from Michigan) has been fraught with unexpected details. Initially, we were going to rent a car –simple right? Get in a car, drive to Georgia. Not!! There were going to be so many added charges that we decided it would be cheaper and easier to fly. After buying our tickets, however, the real minutia began!

We discovered that there were a number of things we had planned on taking that weren’t allowed on the plane either as ‘carry on’ items or ‘check in’ items. It was a real dilemma. Mel had bought two tiny lighters (mini BICs), but, based on his research, it looked like he wouldn’t be able to take them on the plane–checked in OR carried on. It would not be easy to find these lighters once we started hiking. So, we thought we’d just  mail them to the first hostel where we would be  staying. Not! Apparently, there are also postal regulations about sending things that have fuel in them–even miniature lighters. Eventually, Mel discovered that we could each carry just one lighter on the plane! 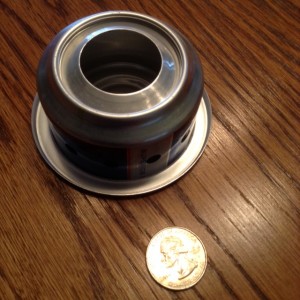 This got us thinking. If a miniscule lighter could be a problem, what about a whole stove?? Granted, it was a very small backpacking stove and it wouldn’t have fuel in it, but what would it look like on an x-ray (a bomb perhaps??), and how would they know it didn’t have fuel? To avoid any  problems whatsoever, we mailed it –without fuel.

Then there’s the whole problem of our backpacks. Fully loaded, they will be too big to be considered carry-on luggage. But, it’s risky, and not recommended by the company (ULA), to send them as check-in luggage. First of all, the internal frame can get bent as the bag is tossed and squashed and mauled. More likely though, the straps can get caught in the conveyor belts or the pack material can get ripped. 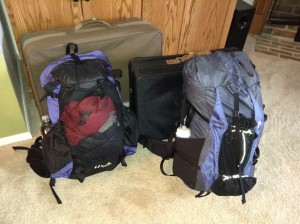 So, to protect them, we decided to buy cheap suitcases (less than $10) at the local thrift store and put our bags in them for the flight. Once we arrive in Atlanta, we’ll just jettison the empty luggage–but probably not at the airport! You know what they keep saying about unattended baggage!

Maybe all this minutia is good. Maybe it keeps our minds off of our ultimate task–walking 2,185 miles for 6 long months in bodies that are well past their ‘best if used by’ date.

We are well past our expiration date!